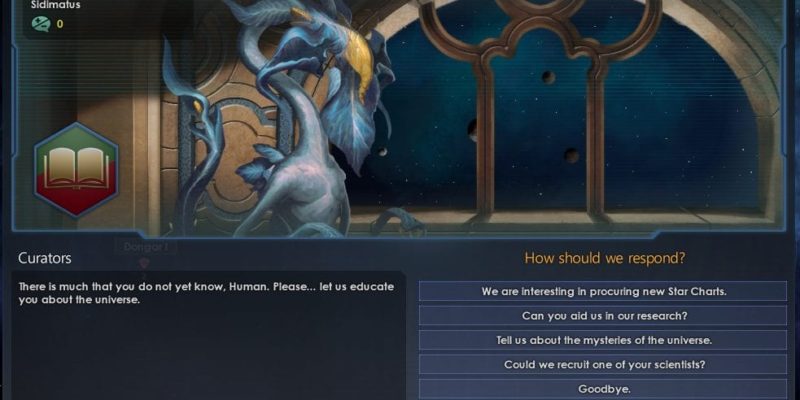 Paradox have written another one of their regular dev diary pieces, this time about the Enclave feature in the upcoming Leviathans DLC. The company are billing this as a ‘Story Pack’ rather than a full expansion.

In fact, the diary specifically says the original intent was a full (paid) expansion alongside the (free) Heinlein 1.3 patch, but this was scaled back “so that the Stellaris programmers would be able to focus on bug fixing, UI improvements and improving/reworking features in the free update”. The ‘Story Pack’ title for Leviathans means it’s “mostly scripted content”.

One of the parts that isn’t scripted story stuff, however, is the Enclaves. That’s an umbrella term for the neutral traders, scholars and artists who reside in ancient space stations. They’ll each offer different interactions. Traders will exchange minerals for energy (or the reverse), scholars can offer you star charts and sell hints about Guardian weaknesses, while artists can produce fine works for your buildings.

Perform enough trades with a given Enclave dweller and you’ll earn enough trust to perform an ‘advanced interaction’ with them (it’s not romancing, this isn’t BioWare).

Of course, if you’re a merciless empire of ruthless bastardry, you can just attack Enclaves and pick up valuable salvage and technology from their smoking wreckage.

In addition to the above, Paradox have provided a refresher on what will be coming to Stellaris with the Heinlein 1.3 freebie update. As well as confirming everything that’ll be in Leviathans. No release date on that DLC yet (or price), but it’s due in Autumn.

Heinlein 1.3 Features (said to NOT be an exhaustive list):

Leviathans DLC Features (this one is exhaustive):