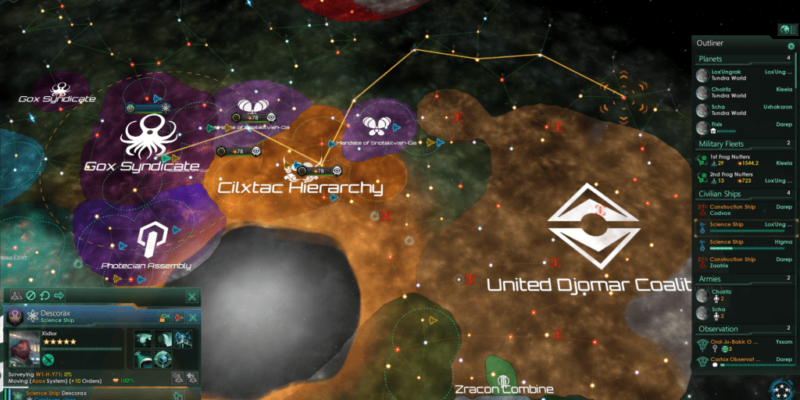 Despite its intergalactic themes, Stellaris is a grand strategy title informed by the very human power struggles found in prior Paradox releases. Just as Crusader Kings II was a game of familial scheming, and Europa Universalis IV was all about the stewardship and rivalries of nation states, Stellaris is about the foundation of a lasting, star-spanning empire. And, once again, Paradox have provided the tools, rules, and structures for players to orchestrate their own stories of alliances, grubby manipulation, and betrayal.

For those who’ve dabbled in CKII’s medieval dramas, or EUIV’s alt-history, this jump to the space operas of Stellaris will feel like a natural progression. Anyone hopping into this as their first Paradox strategy title will find a steeper learning curve, but one eased by lessons in UI design, presentation, and explanatory tool-tip texts that the in-house studio have learned across those other games. 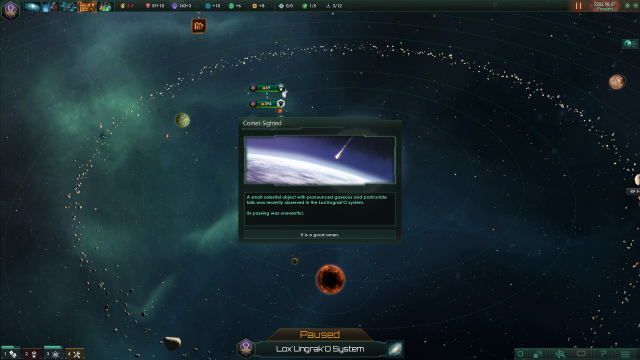 When discussing Stellaris, the game naturally shares a lot of terminology with the 4X (Explore, Exploit, Expand, Exterminate) genre. ‘Grand Strategy’ suits it better overall, mainly because of the systemic links to previous Paradox titles; but the game’s phases and patterns do match those found in 4X titles, even if the manner by which you engage with them is sometimes quite different. Your fledgling star-travellers will explore nearby systems, interact with other species, design combat ships (or let the AI do it), colonise worlds, and research new technologies. That’s all fairly 4X-ey. But the very same empire may also drug its own populace into compliance, embark on ethically dubious genetic ‘enhancements’ of assimilated races, and force striking workers back to their mines through media intimidation (or just replace them with droids). Which is very ‘Crusader Universalis’. And very Paradox.

Nor does Stellaris present a set of star-nations who all begin on equal footing. Like previous grand strategy releases, asymmetry between factions plays a significant role. It’s technically possible to rule the world in Europa Universalis IV by starting as Albania, but playing as a small nation is usually an indication that you’re looking for something besides painting the map. In Stellaris, power-gulfs between empires are more readily obscured (you can opt to give some races a ‘boost’, and the universe is a dangerous place with many unexplored and unknown horrors), so the type of game you’re likely to play is guided more by the physical and political traits of your species.

It’s possible to select a pre-created race, but a lot more rewarding to construct your own from the myriad of choices available. Whether you end up with a yellow avian species called The Big Birds, or a race of fungoids with a giant pink heart on their flag, is all down to personal role-playing preference. Traits (things like fast breeders, slow learners, intelligent, strong, and so on) add further flavour with mechanical boosts or negatives. But the major defining features of your new race will be its political beliefs, which in turn will inform the style of government. Fanatical spiritualists might form a theocratic dictatorship, while more balanced types can select from a range of democracies. Ultra-militarists might have an army dictatorship, and so on.

These guys are just adorable. Which probably means they’re deadly.

The government type does far more than just change the tone and text of the tutorial helper-bot (though that’s a nice touch), and resonates throughout the choices that are likely to be available to your empire. Exploration, the type of diplomatic interactions you’ll have with other species, as well as the sort of edicts and polices you can enact throughout your star-realm, will all be affected. Pacifist races, for example, cannot partake in massive orbital bombardments of planets during invasions (and indeed, their populations get quite upset if you even do a little bit of orbital bombing). More scientific species will be extremely eager to interact and poke around at new forms of life, or pre-space-travel races; while warmongers can just merrily wipe them out to make room for more colonies.

You’re not so much out to conquer all of space in Stellaris (though that can be your ultimate victory goal if you wish), but rather to explore it and interact with what you find in accordance with the legislative and moral philosophies of your species. These beliefs can also change over time, either through having to assimilate peaceful migrants or subjugated populations into your empire, or a player-driven decision to switch government types and ‘guide’ the views of your people elsewhere.

Stellaris extrapolates from the elegant mechanic of ‘monarch points’ (steadily increasing values representing your country’s administrative, diplomatic, and military power) found in Europa Universalis IV, spreading the idea over a more traditional resource system, tech research, and fluctuating caps on fleet power and colony ownership. A general ‘influence’ resource that ticks over according to numerous factors (whether you have a fancy planetary capital, boosts from your ruler and so on) is spent on hiring or replacing scientists and governors, as well as on expanding your empire through colonies and frontier outposts.

Stellaris’ resource mechanics manage a fairly neat balance between the prevention of rapid over-expansion, and an allowance of steady progress (in research, exploration, planetary settlement, war and all the rest). Planets outside your core colonisation cap can still be part of your empire, but need to be siphoned off into auto-managed Sectors. 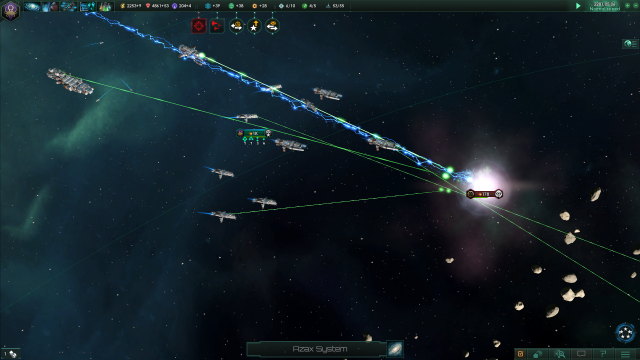 This is pretty much just simulated when enemy fleets get near one another, but it looks suitably impressive.

Even further EUIV comparisons are unavoidable in matters of warfare. In the Paradox grand strategy tradition, specific war goals must be set upon a declaration of hostilities. During my latest game, a neighbouring sloth-like mammalian empire that I’d been attempting to court into an alliance was smashed in a conflict with a more powerful foe comprised of ultra-corporate bugs. Suddenly, the sloths wanted to join my little star league of nations, and others (possibly alarmed by what they’d just witnessed) flocked to the banner as well. Enough of them to form a Federation (which allows the sharing of technology in designing Federation fleet vessels, among other benefits), in fact. Our war goals were clear; liberate the recently taken worlds and give the domineering mega-corp empire a bloody nose.

Several decisive fleet encounters later, that’s exactly what had happened. Space combat in Stellaris is depicted with more visual flair than previous grand strategy titles (you actually get to see lasers and missiles flying), but is, again, largely a numerical simulation. The tactical edge comes from positioning (affected by the three means of space travel in Stellaris; slow warp, somewhat restrictive hyperspace lanes, and advanced wormholes), the power of your fleet, and whether you brought friends to the fight. Pleasingly, the allied AI seemed competent enough in splitting its forces between backing up my vessels and making war gains of its own.

The eventual victory over Bug Corp was greatly satisfying, and felt like the successful result of all my long-term diplomatic politicking, trade deals, and non-aggression pacts with the eager members of our new Federation.

That’s the kind of player-driven activity which puts Stellaris in the same category as other anecdote-generating Paradox games like Crusader Kings II. There’s an extent to which you need to keep poking a domino or two around the universe to set things tumbling into motion, and that’s always vastly preferable to just sitting there and generating resources while you watch the galaxies tick over around you. All sorts of fascinating mechanics are there for you to mess about with, if you’ll only have the courage to deal with the consequences. I mean, are you going to not develop a technology called ‘Sentient AI’, just because the UI suggests it might be a bit on the dangerous side? Come on.

A bit of genetic manipulation never hurt anybody, right?

Messing with your immediate neighbours, attempting to manipulate the demographics of your own species for long-term gain, and creating armies of mindless droids to take over distant worlds with callous zeal are what these games are all about. Stellaris provides all of that, in a galaxy full of strange amoebic entities, lost precursor civilisations, and a soundtrack that either lurks around Brian Eno’s more void-like ambiance, or just straight out recalls the majestic imperial sweeps of EUIV.

Knowing precisely how Paradox’s post-release support structure works, some of the more obvious feature gaps will undoubtedly be filled (either for free, or as larger paid expansions) by future dispatches. Since Stellaris has specific characters as governors and the like, the option for Crusader Kings II-style assassination (or hell, why not inter-species power marriages?) plots will surely happen sooner or later. For now, most of the disturbing covert espionage type actions are only taken against your own people (it’s fine, they like having mind-altering gas in the atmosphere), rather than the other alien powers.

Inevitable future patches also mean that a few stray bugs like the wrong flag and ownership tool-tips sometimes popping up on things, or the trade deal page remembering prior offers but not the correct likelihood of them actually being accepted, will be sorted out. There might be a pass on the mechanics of colony population happiness too, which currently seems a little too easy to keep in the safe 50-80% range. Absolutely perfect mechanical harmony is always very unlikely in a strategic title with so many moving, interconnecting parts at launch, so it’s to Paradox’s credit that I’ve stumbled across few examples of clear malfunction.

Finer player control over which information pop-ups automatically pause the game (or indeed pop-up at all) would be welcome as well, and is a strange oversight since other Paradox titles tend to allow this.

Your characters still pick up some weird habits, like getting hooked on what I’ll assume is Spice.

That’s not to suggest Stellaris is releasing in any kind of incomplete state. It’s just that the manner of its design, and the development of its predecessors in the grand strategy realm naturally lead the imagination to wonder about space marriages, more in-depth trading routes, and even more extreme or unique philosophical traits to try out. There are already plenty of instruments here with which to orchestrate your space operas, but, given another year of mods and add-ons, Stellaris will have the equivalent of multiple symphonies to choose from.

Thoroughly alien in presentation, yet unerringly human in many of its galactic power tousles, Stellaris successfully gene-splices the themes of a 4X game with the mechanics and systems perfected over Paradox’s last couple of grand strategy titles. The complexity curve, often a bit of a problem for newcomers in prior releases, will be smooth enough for those who’ve played a strategy game or 4X before; while Paradox veterans will be immediately at home with a star-nation sandbox that shows every sign of being another long-term strategic triumph.