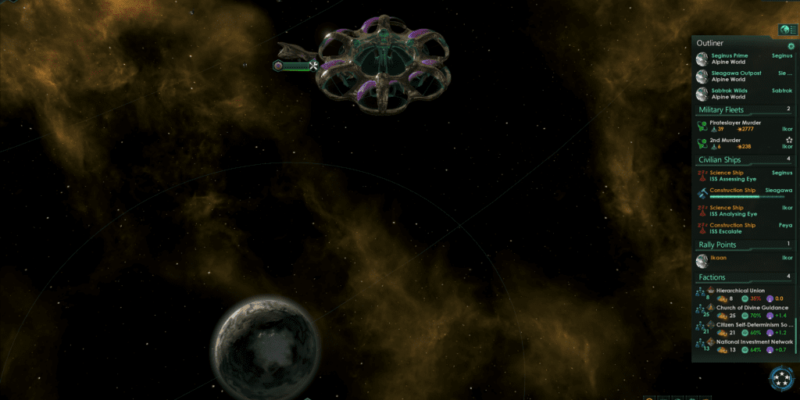 DLC for Paradox-developed titles has traditionally been based around a particular region or theme. If you wanted to set up in India in Crusader Kings 2, you’d buy Rajas of India. Europa Universalis IV players who wanted more depth to trading could pick up Wealth of Nations. Utopia, the first major expansion for Stellaris, follows the thematic route (‘idealised’ forms of space empire; whether from the perspective of enlightened psychics, or purge-happy space fascists), but in a looser manner than its predecessors.

That’s partly because the ahistorical sci-fi subject matter lends itself better to abstract themes of power than specific regional histories, and partly because Paradox are still bolstering some of the weaknesses lingering from the game’s May 2016 launch.

Every piece of DLC for Paradox’s main developed titles is released alongside a free (usually substantial) update which adds features to the base game too. Where Utopia is concerned, the studio has tried to strike a balance between including unique, enjoyable features in the DLC, without withholding other key mechanics from the main game.

Ship colours now correspond to those of your empire, which is handy (and that’s a freebie).

Two of the features which I think will do most to revitalise Stellaris are actually free ones coming with the 1.5 ‘Banks’ update. The addition of proper political factions and ‘Traditions’ (more on those later) provide that familiar Paradox feeling of having to wrestle with your own internal problems as much as external threats; something the game had definitely been missing.

Several of the paid Utopia features are extensions of a free Banks feature, and even those which aren’t can be difficult to talk about in complete isolation. I’ll do my best to keep it clear which things are exclusive to the expansion, and what parts will be in all versions of Stellaris after 6 April.

The DLC features can be divided broadly into three categories: greater depth to species customisation and roles (which in part overlaps with the free stuff), expanded mid-to-end game species evolution options, and the building of Megastructures (both separate and unique to Utopia).

Everybody, for example, will get access to ‘Civics’. These are additional perks and quirks you add to your created race to make them feel a little more specialised. Things like Cutthroat Politics (+1 influence) or Mining Guilds (10% Minerals boost), and some of which (Imperial Cult) can only be picked with certain ethical pre-requisites. But only owners of Utopia have access to the unique Hive Mind government type and its special civics, or to ‘Fanatical Purifiers’; available only to those who really love genocide, and despise diplomacy. 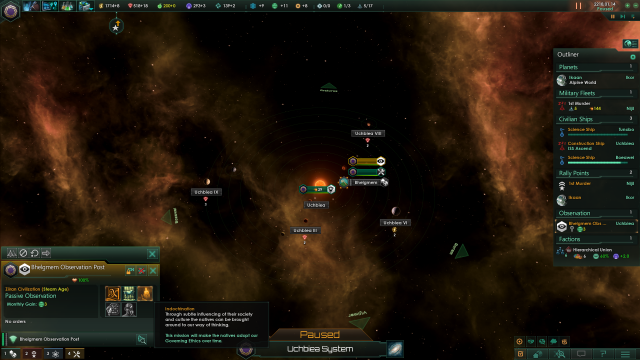 As part of Utopia, you can now also Indoctrinate the hell out of pre-spacefaring race.

The difficulty presented to a reviewer by a DLC which is focused quite heavily on divergent and distinct species customisation is that running a full game with every new option is pretty much impossible. I settled for covering as many angles as I could by creating a race of deeply spiritual (for potential psychic powers) and overtly authoritarian (because slavery has been expanded to include distinct types in Utopia) bird people, who would beeline for the chance to build the new Megastructures and/or pierce the veil of reality. Preferably while cawing in triumph and preening themselves in a ritualistic manner.

Species customisation adds more flavour to what was already a pretty superb early game experience, but what Stellaris tended to lack was a compelling mid-to-late-game period. Unless you were poking at the edges to make your own entertainment (which usually just meant starting a war with somebody), that central era could often stagnate. Political factions and the Traditions mechanic (again, free features) help to mitigate this issue, giving you potential internal strife to deal with and further mid-term goals to achieve, respectively.

My spiritualist, authoritarian bird race ultimately liberated their ‘domestic servants’ (the polite way to frame slavery) and ended the associated caste system. I did this partly for role-playing reasons (a new imperial ruler had taken the throne, and I decided he’d be a reformer) and partly for practical ones (full citizens made better, happier workers and my economy was shifting). Immediately, the two existing political factions, a set of authoritarian traditionalists and some ultra-spiritual devotees of the imperial religion, were joined by a third, left-leaning, group desiring even greater policy reforms. 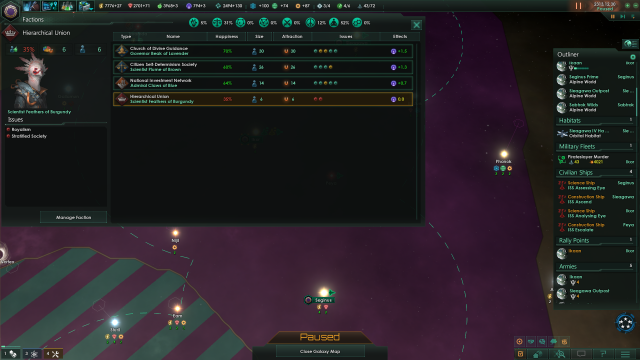 Looks like the Hierarchical Union are heading the way of the Whigs.

Throughout the next few decades, any policy or edict decisions I made had to be weighed against pleasing or irritating one or more of these factions. Juggling those choices, along with the impact it might have on the productivity of my colonies (which in turn made me delve into the murky world of government propaganda, and covert support for a favoured party), kept that period of time vibrant and captivating.

Traditions, meanwhile, are a reflection of your galactic priorities. Funded by a new Unity resource, which has its own buildings you need to plan around, Traditions are divided into seven categories with headings like Expansion, Diplomacy, or Domination. Each category has five associated aspects to unlock with Unity points, tied to buffs and benefits (the Expansion set, for example, make it easier and swifter to colonise new planets). Though not as immediately compelling as the faction system, Traditions and their attendant resource are another aspect of internal management around which to strategise.

With Utopia, they gain another layer of relevance. For every Tradition category you ‘complete’ in the DLC, your species gains an Ascension Perk. Some are powerful benefits like being able to clear almost any tile blocker on a colony world (bypassing a lot of research time). Others are intriguing and unique evolutionary goals for your species, like unlocking latent psychic abilities (very helpful for admirals who get a sizeable evasion bonus, or governors, who get a bonus to quelling unrest) or embracing a synthetic singularity. 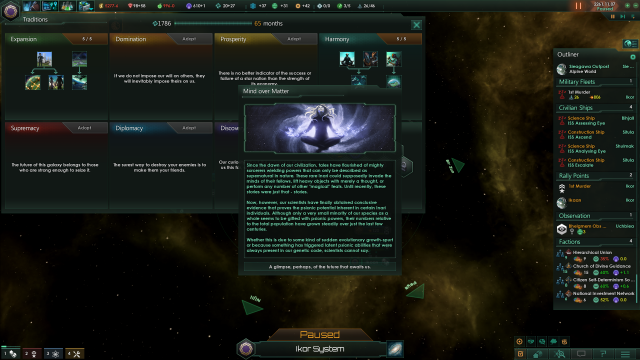 Forget battleships, we’re going to Zen our way to supremacy.

My birdman psychic race eventually became so powerful that they were able to peer into the cosmic realm itself. That in turn enabled a little espionage-based revenge on a Fallen Empire who had previously beaten my fleets into submission and killed a former ruler. Gazing for too long into this Shroud, however, seems as if it may attract the unwelcome attention of unknown entities.

When they’re not turning your Stellaris species into mighty telepaths, Ascension perks are also used to unlock the secrets of Megastructures. Like a lot of this DLC they have both practical and flavourful elements. I wasn’t able to experiment with every different type, but the Habitats (which can be constructed a great cost around most planetary bodies) proved to be a terrific way of sticking another readily-colonisable ‘planet’ in a nearby orbit. What you lose in Habitat mineral investment costs, you probably can make up from other resources. Their solar plants can generate great amounts of energy, and the science labs give three of each science resource across the board.

Ringworlds (for which, sadly, I didn’t reach the necessary requirements) are such feats of engineering that they require an Ascension perk all of their own. Again though, as well as a sense of pride in your species’ achievement, the structures reward your investment. When complete, Ringworlds provide the equivalent space of a whopping four maximum size habitable planets. 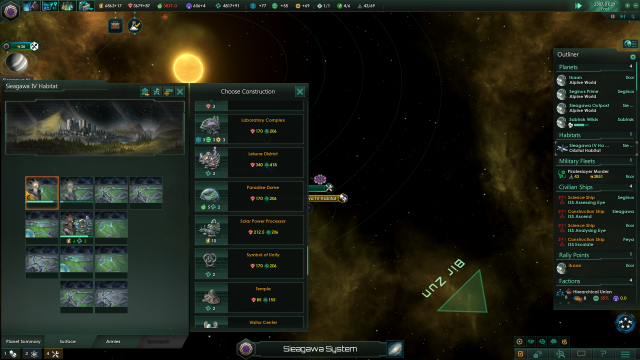 The division of mechanics between the free Banks 1.5 patch and Utopia itself feels pretty much correct. Banks is doing the heavy lifting on features vital for a more dynamic Stellaris mid-game (radically reworked factions, Traditions), and adding quality of life tweaks like ship colours which match those of your species. That leaves Utopia to delve into areas of more optional luxury; specialised role-play options like Hive Minds under the new government system, new late game event chains linked to Ascension perks, and vast engineering projects to expand or consolidate your empire in ambitious ways.

At $20 it’s not exactly cheap, so to get full value you’re going to have to be interested in a significant majority of the DLC-specific additions. I had a fine time with everything I saw in Utopia, but it’s difficult to claim anything included in the paid expansion is as essential as the new (free) faction mechanics. That’s as it should be, really; and if you’re keen to mercilessly dominate the galaxy, enslaving all before you as consumable livestock, before uploading your species minds to synthetic bodies, then this expansion has all the tools you need.