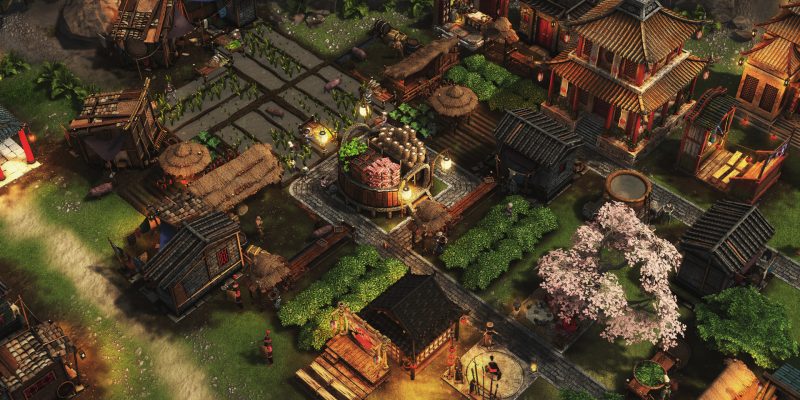 Stronghold: Warlords is the newest real-time strategy (RTS) game from FireFly Studios. It continues the tradition of the franchise which started two decades ago. Of course, those who wish to get right back on the saddle might want some general gameplay tips, so here’s our Stronghold: Warlords beginner’s guide to help you out.

Note: Stronghold: Warlords also features, uh, warlords who appear on the map. They can be captured for additional bonuses. You can take a look at our warlord perks and upgrades guide for more info.

The core of any RTS game is being able to gather resources quickly and churning out new units. In Stronghold: Warlords, that means placing your stockpile close to four resource types:

Since you’ve got one stockpile that workers go back and forth from, it’s important that this structure is smack dab at the center of these deposits. In some cases (i.e., quarries and iron mines), you’d need a buffalo tether nearby. These beasts of burden will be the ones to bring blocks of stone and iron to the stockpile.

Note: Stronghold: Warlords is an insta-build/insta-recruit RTS. The moment you click on something, it’ll appear on the map. 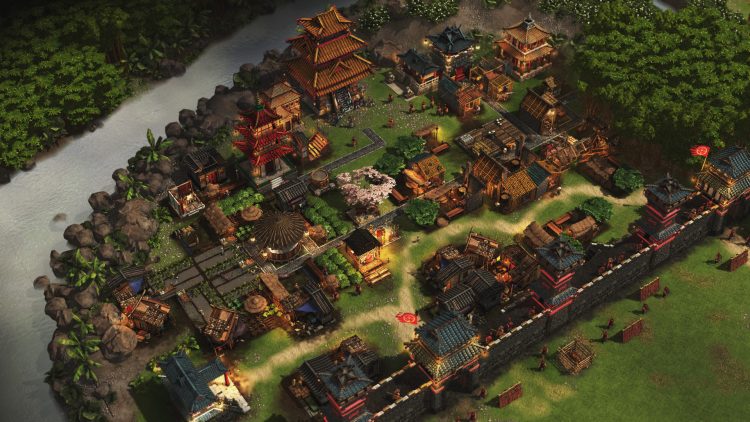 You don’t need to train workers in Stronghold: Warlords. Instead, they’ll automatically flock to your keep if popularity (aka. happiness) is high. It’s denoted by the smiley/angry face icon on the bottom-right corner of the HUD.

Popularity can be increased or decreased by tweaking the values of the panel just below it. These include:

The idea is to balance what you give out to the people, thereby increasing popularity, while also considering the taxation level so you can end up with more gold (which is used for units and buildings).

Likewise, take note of your housing and housing quality. Houses increase your worker cap. As for housing quality, if it’s higher than your total number of workers, you’ll have an increase in popularity as well. 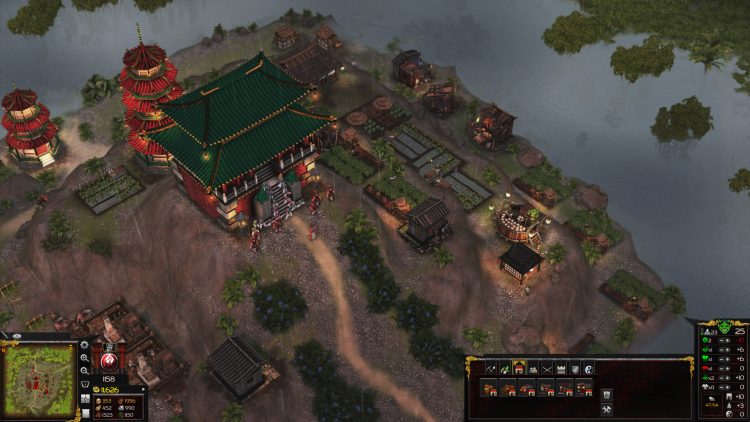 You can gain additional bonuses to popularity by way of temple buildings. The more buildings you have within a temple’s area-of-effect, the bigger the popularity gains.

Moreover, there are Fear Factor buildings that can be constructed: 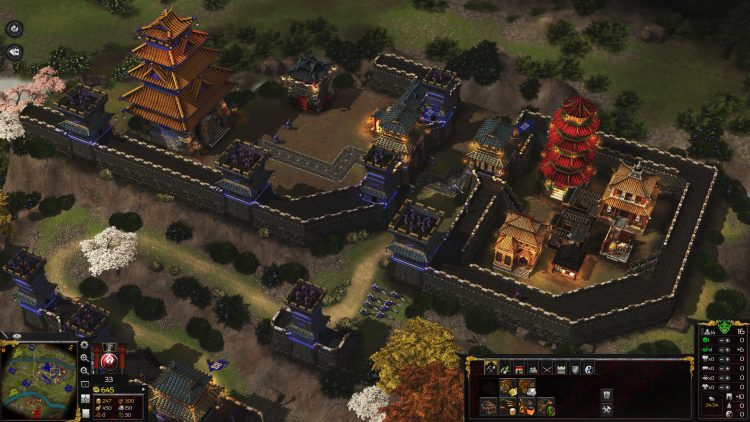 Military: Churning out your troops

Although Stronghold: Warlords implies that leaders of different nations are around, you’re not necessarily restricted in the units you can field. You’ve got everything from warrior monks, samurai, blowpipe tribesmen, imperial troops, ninjas, and more. The idle workers that you have are automatically converted into fighting troops the moment you start recruitment.

Everything starts with the barracks, though it’ll only let you recruit tribal units at first. Next, you’ll want an armory and several workshop-type buildings that are close to the stockpile. This is because people will transport wood and iron from the stockpile to their respective workshops. In turn, these will be taken to the armory to be crafted into weapons or armors. This is a gradual process, one that’ll eventually let you recruit high-tier unit types like auxiliaries and imperial troops.

Of course, there’s also the military academy which lets you churn out special troops. It differs from the barracks in a couple of ways: 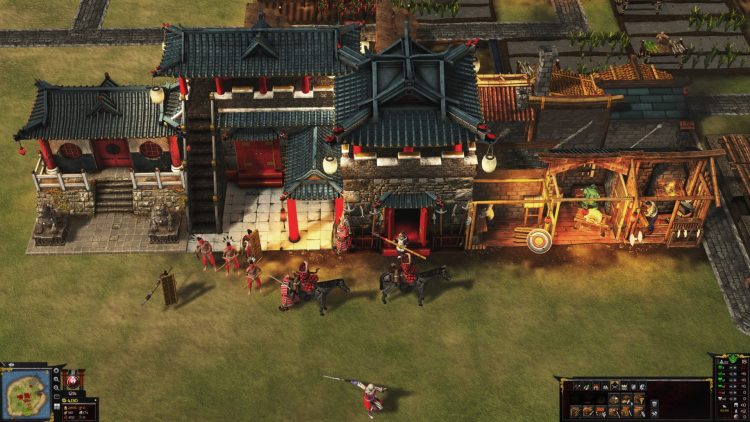 The siege camp lets you construct siege towers, ballistae, mortars, catapults, trebuchets, and more. You may even recruit rocket launchers that pack an explosive punch.

Most siege engines require an exorbitant amount of gold and, in some cases, more than one available worker. In certain cases, there are those that need gunpowder (which is first obtained by having saltpeter mines followed by the gunpowder workshop).

Given that the game does have Stronghold in the title, you can expect to besiege and capture territories on the map. Naturally, the AI will attempt to do the same to you. That’s why you’ll want to surround your keep with walls (which use stone as a resource). You can even add stairs, bastions, traps, barricades, and defensive platforms to beat back attackers. 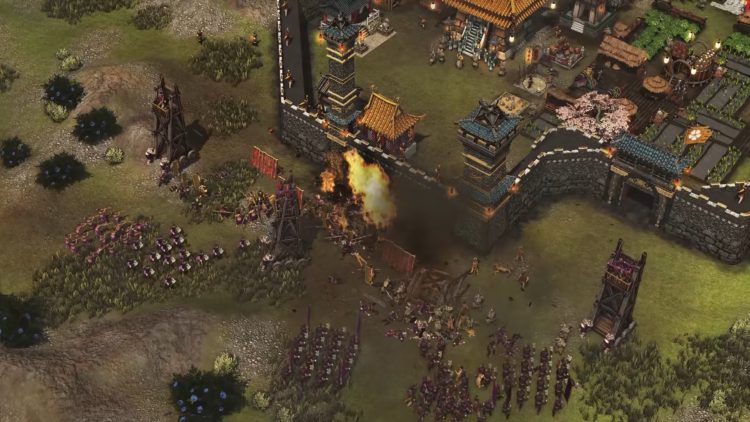 The tutorial won’t help you much, but the campaign is where it’s at

Stronghold: Warlords‘ tutorial only gives a glimpse into a few building constructions before it abruptly ends. As it turns out, it’s the campaign that gradually provides you with information about the game’s mechanics, including additional units, buildings, and more.

The game has five campaigns starring leaders of different nations (i.e., Toyotomi Hideyoshi of Japan, Qin Shi Huang of China, and Genghis Khan of Mongolia). You’ll want to play them in order, starting from Thuc Phan of Vietnam, to unlock the next chapters.

Note: You may also try the free build, skirmish, or multiplayer modes. Free build mode has no enemies, so you can happily design a base and get acquainted with certain mechanics. 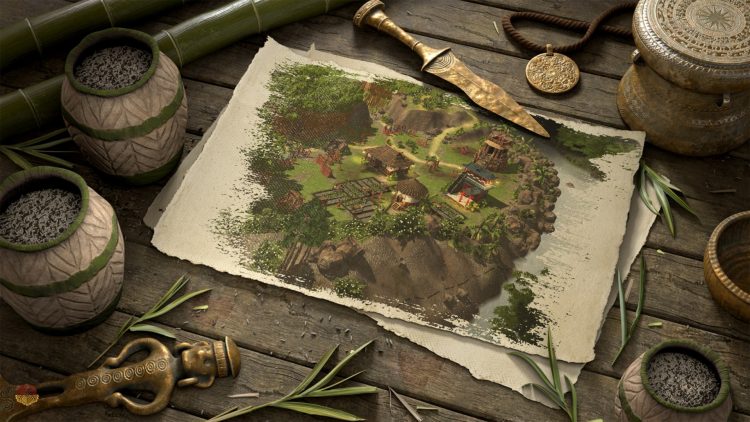 Stronghold: Warlords is available via Steam. You can also take a look at our warlord perks and upgrades guide.