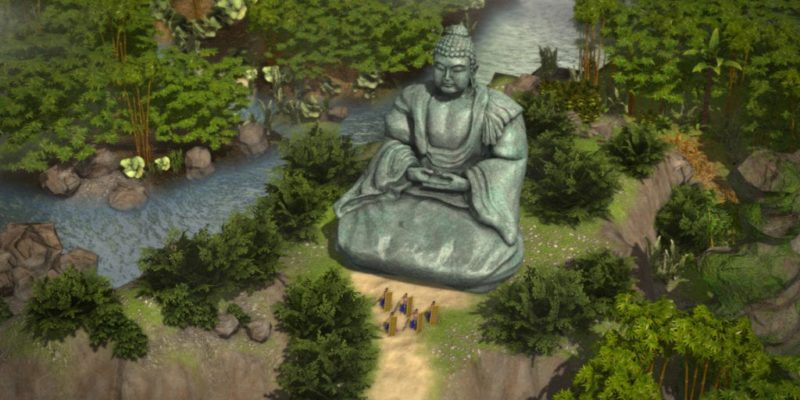 The first Stronghold game was released… basically back in the Middle Ages, if we count it in video game years. Stronghold: Crusader followed almost immediately. Then: silence. There were really no good Stronghold games after those two. They went 3D, they went after mythology, and… they failed. Will transporting the game to Asia with Stronghold: Warlords pay off?

As Stronghold is going east, the unit roster will draw inspiration from various periods of Vietnamese, Chinese, Japanese and Mongol histories. Apparently, the Warlords campaign will parcel them out somewhat historically, but I doubt that will hold for the skirmish game. On the other hand, Stronghold wasn’t ever really a big stickler for historical accuracy. Otherwise, we wouldn’t have had torch-armed slaves running around as a quick raiding force in Crusader.

Getting a stronger hold on Asia

The preview demo for Stronghold: Warlords is a runty thing. You may have seen it already in video. The goal is simple: hold out for 15 minutes as enemy waves batter down on your defenses. However, it presents the new stuff coming to the game quite well – even if we’d love to have a deeper dive into the gameplay. 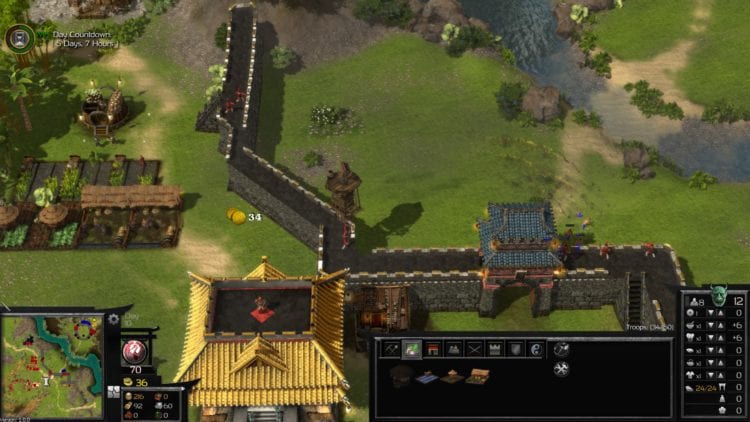 The age-old, time-tested Stronghold formula is there. You’re a feudal lord, a massively powerful character lording over his domain from the top of this castle. Sending this player character into battle is a desperation move. What you’re supposed to do instead is build Anno-like (but shorter) production chains to keep your castle (some would call it a… stronghold) going and growing.

To that end, you will start with the basic industries, cutting wood for further construction and supplying rice so that your peasants don’t starve. You must maintain the balance between the demands your industry and warfare place on the populace as well as your ability to keep them fed and happy. Stronghold: Warlords still has you building hovels, but you may want to build bigger, more expensive houses to keep your citizens happier.

Then you move on to extracting stone, as it’s required for the more advanced buildings and walls. It wouldn’t be a Stronghold title if you didn’t have thick belts of fortifications encasing your castle and the heart of your industry. The developers have worked on the wall-placement system in the game, allowing you to build stronger fortifications more economically, but that’s not something you can easily notice. 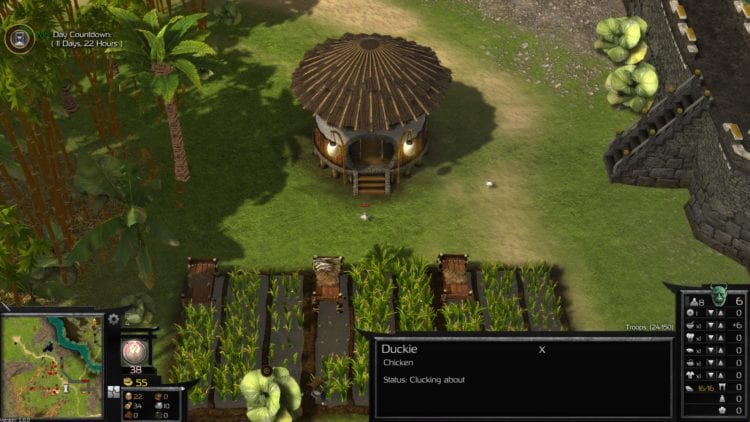 A chicken named “Duckie”? What horrible historical inaccuracies will we have to suffer next?

What you can actually appreciate is walls no longer being a death sentence to troops placed upon them. Once the rocks start falling and the curtains start collapsing, your troops won’t just plummet to their deaths. They will be thrown some ways away, but they have good chances of landing alive. If they manage to fall next to the squishy enemy siege engines, they might even cause the enemy more problems.

The artistic endeavor of armed conflict

Aside from the improvements to walls, Stronghold: Warlords is implementing stacking limits for troops in towers, so you won’t be able to jam-pack them with soldiers. Still, towers remain an important part of the defense, increasing archers’ range and keeping them safer from return fire. Bowmen are actually a very important bit of the demo, as they are the only soldiers you can recruit. They also demonstrate the basic economy chain: woodcutters cut wood, fletchers turn them into bows, and bows are married to peasants to create archers.

If you want to get melee troops, you’ll have to request them from the Tiger Warlord. Warlords of all types are the minor stars of the new game. They control their own bits of the map, sitting there like specialized resource and service nodes. In Stronghold: Warlords, you’ll need to either conquer them or pressure them via political points. Once you have a warlord under your control, you can issue demands (again, via political points). For the Oxen Warlord, this means getting shipments of wood or stone. For the Tiger Warlord, that’s requesting troops, which allows you to bypass the need for an industrial chain and spare peasants. And for the Turtle Warlord… well, you can’t really make demands of him, but your political point expenditure will be used to expand his castle and upgrade his defenses. 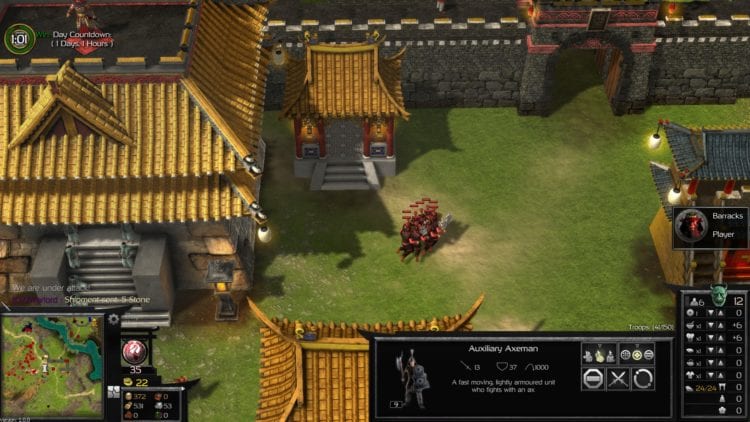 I am curious to see how that will work in the full game when you’re really jostling for dominance against players both AI and of flesh and blood. I guess having a Turtle Warlord with archers lining the walls on your axis of advance might be dangerous to your siege prospects. I’m mostly looking forward to seeing what upgrades and demands we can make in the full Stronghold: Warlords game.

As for the improvements in combat, we’ll see how it goes. I like that melee doesn’t collapse into a single point of clipping dudes just waving weapons at each other until it all ends. Your soldiers actually form up with banners and such, marching neatly and not getting stuck on terrain that often. Actual combat was always one of the weaker parts of the game, so it will be interesting to see how it looks when you’re pitting varied forces against each other, rather than just sending axemen against unarmored spearmen.

Your wall scroll is glitching out

Speaking of how things look, Stronghold: Warlords already looks quite okay. While no 3D art will ever recapture the charm of lovingly-crafted sprite animations that show a spearman falling with an arrow piercing his chest, I think I can trust the developers to make Warlords look decent. We’re not talking AAA here, but setting priorities and using resources smartly matters a lot when you’re a mid-tier developer making a 3D game. However, I have no idea whether the devs will manage to handle the audio part well. I’m talking mostly about the announcer and unit barks, as all the current ones are just placeholders from the previous titles. I just hope we won’t run into any accidental Mickey Rooney-isms.

Overall, I am cautiously hopeful for Stronghold: Warlords. While it doesn’t look like the title will revolutionize the series, moving away from medieval Europe and constant rereleases of the successful titles is a welcome change of pace. Once bitten, twice shy, however – and we Stronghold fans have been majorly mauled in the past.

Wattam, the next game from Katamari’s creator, prances to PC next month