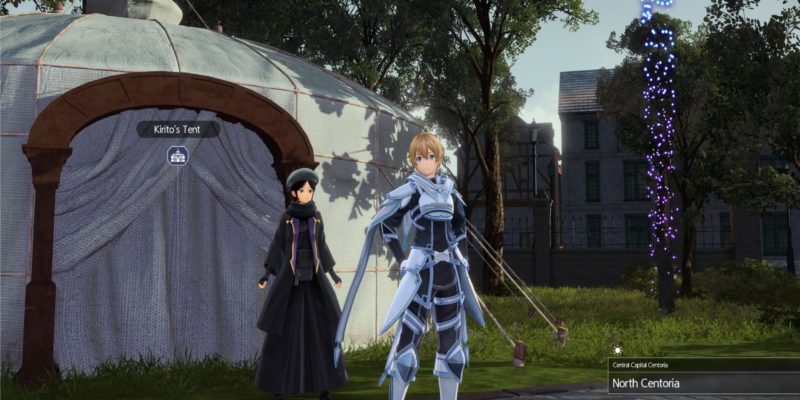 Sword Art Online: Alicization Lycoris puts you in the shoes of Kirito. As you progress through the game, you’ll see a few costume changes here and there. However, you’ll also be able to change Kirito’s appearance, gender, and the cosmetic/transmogrification clothing of other characters. Here’s our mini-guide to help you out.

Before you can do some customization, you need to go through Sword Art Online: Alicization Lycoris‘ first chapter. Be forewarned since, as mentioned in our official review, there are half a dozen boss fights and some even have multiple phases. Similarly, as cited in our technical review, there are a number of performance and control issues that can put you at a disadvantage.

All in all, you’re looking at roughly eight hours to get past the first chapter. If in case you made it past those battles, then you’ll finally be treated to additional features in the game including Kirito’s Tent: 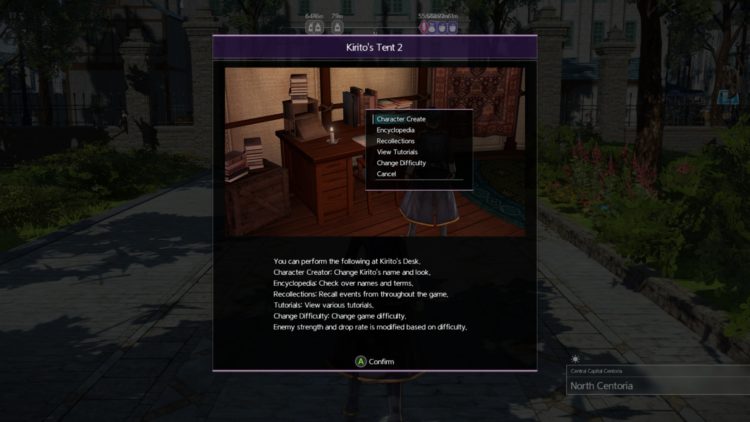 Kirito’s Tent is located in North Centoria’s main grounds right next to the savepoint. Inside the tent, you’ll spot Kirito’s Desk which lets you view Sword Art Online: Alicization Lycoris‘ encyclopedia, cutscenes, and tutorial tooltips. You can also change the game’s difficulty.

Go ahead and click on “Character Creation” to change Kirito’s appearance, name, hairstyle, and even the avatar’s gender and voice: 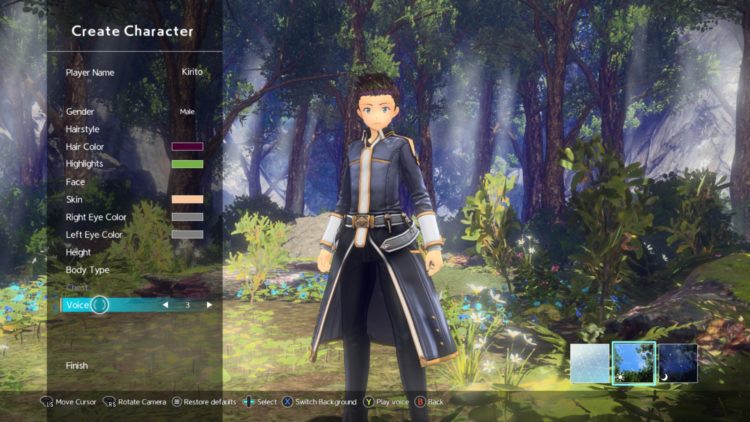 Note 1: Kirito will revert back to his default appearance during cutscenes.

Note 2: Kirito’s Tent lets you have “special” conversations once you’ve maxed out a companion’s affinity.

Don’t forget that you can also make changes to the equipment of Kirito, Eugeo, Alice, and co. via the Visualize Attire function in the Status menu: 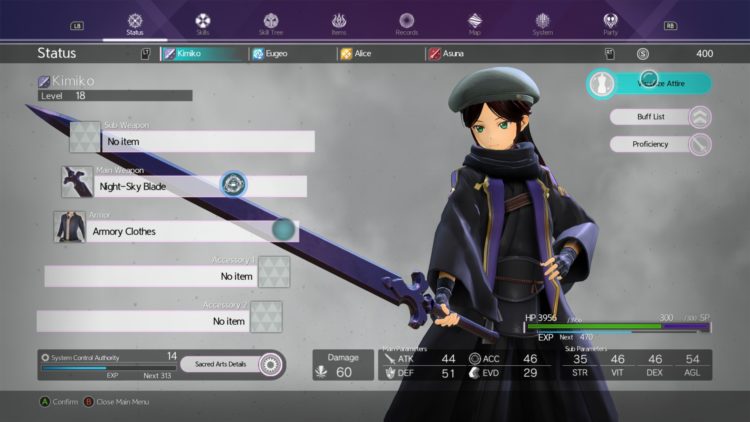 Here, you can choose from clothing and weapon styles that your characters used in certain cutscenes as well as anything you’ve obtained from the “Month 1 Deluxe Edition” (if you purchased that version). Because these are transmogrification/cosmetic effects only, you’ll still retain the default stats of your equipment. 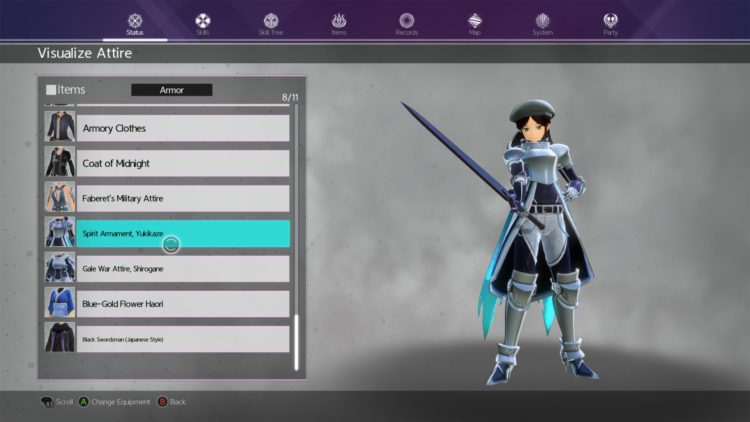 Sword Art Online: Alicization Lycoris also has “Prize Outfits.” These are obtained once you max out the two character traits via the Affinity system — aka. heart-to-heart minigame. You can read more about the mechanics in our Affinity guide.

Only a select few characters have Prize Outfits namely Eugeo, Alice, Asuna, Lisbeth, Sinon, Leafa, and Silica. Kirito also gets a Prize Outfit since his traits are automatically boosted as you play the game and engage in the heart-to-heart activity. Here’s Kirito’s costume: 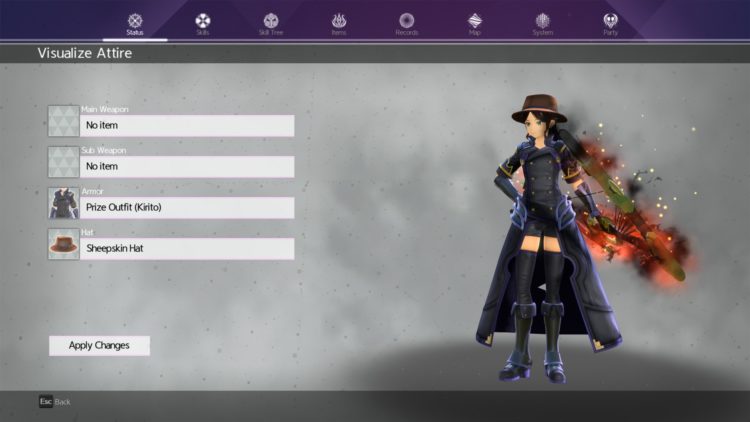 You can also use dyes to customize a character’s appearance in Sword Art Online: Alicization Lycoris. You’ll find an NPC — Adamea (Clothier) — in North Centoria’s marketplace, and she lets you craft dyes.

Dyes require specific coloring materials (found in various zones) as well as limestone. Dyes are plentiful and some can be farmed from several locations. For instance, there’s a spot where you can gather a lot of red dye and it’s where you fight the Divine Beast known as Bloomcrown the Temptress.

For limestones, they’re easily farmed once you reach chapter 5 and have access to the Sarole Mountains zone. All you need to do is head to Chieria Town, pick up 3x limestones from the nearby mining field, and fast travel to another zone. Then, teleport back to Chieria Town and do it all over again. 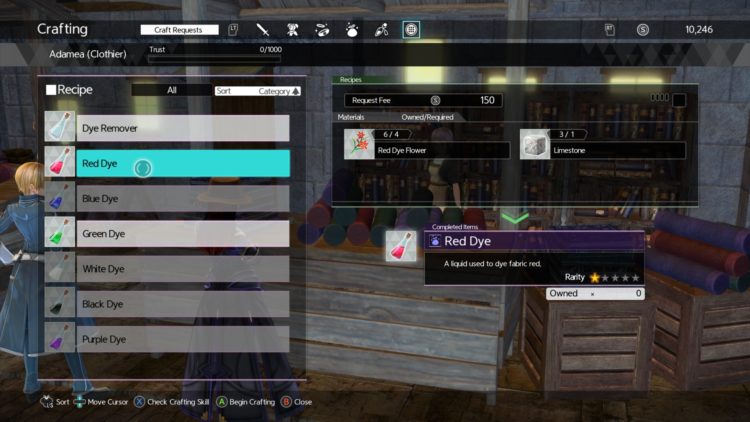 You can watch the video below from YouTuber Murad Zero to see how it works:

This is actually something that completely took me by surprise. So, during the course of my Sword Art Online: Alicization Lycoris playthrough, I’ve actually avoided most service requests (aka. sidequests with a “pink quill” icon) thinking that they really didn’t offer a lot of benefits.

However, I was completely flabbergasted when I found out that you do unlock additional costumes. The info comes from Kentun, the admin of Sword Art Online: Alicization Lycoris‘ Discord community, who cites that completing all the service requests in Lockiss Rocks nets you two new costumes. Here’s the Grand Chamberlain costume: 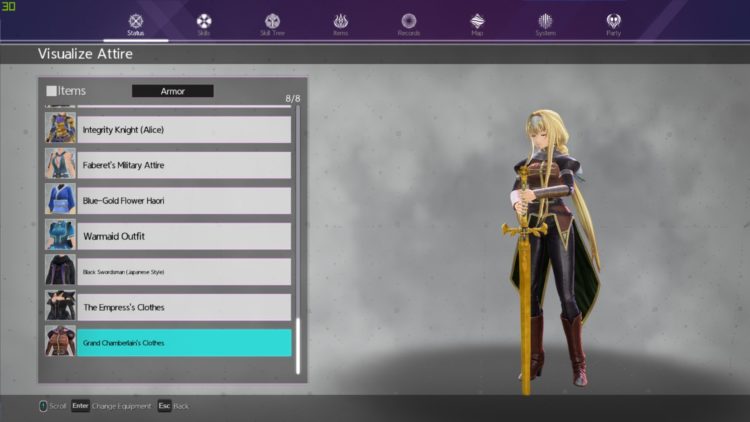 Kentun and other users on Discord have been combing every nook and cranny of the game to see if other zones also provide new costumes. So far, the user has shared that the following zones, sadly, don’t have any new cosmetic options upon completing all service requests: Snild Snow Fields, Mildea Plains, Deusoldort Desert, Great Mound Road, Raubal Greenlands, Treitis Pass, and North Centoria.

Lockiss Rocks, so far, seems to be the exception to the rule here as both costumes are thematic and related to the story. Here’s the Empress costume: 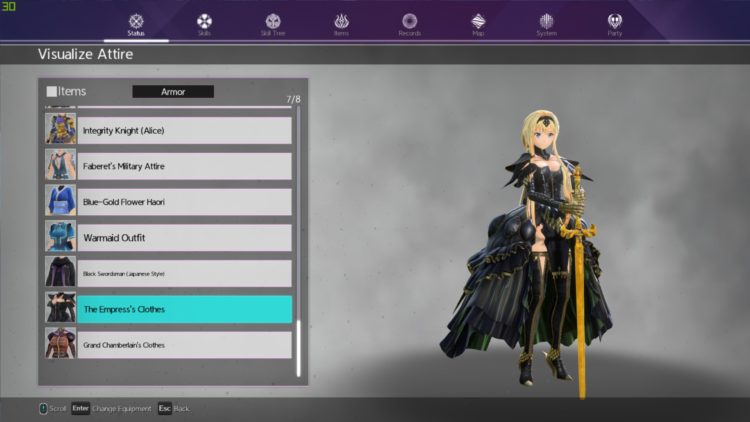 We’ll keep you posted in case there are new developments, or if there are more customization/cosmetic options out there. For now, head over to our Lockiss Rocks service requests guide if you need help unlocking these costumes.