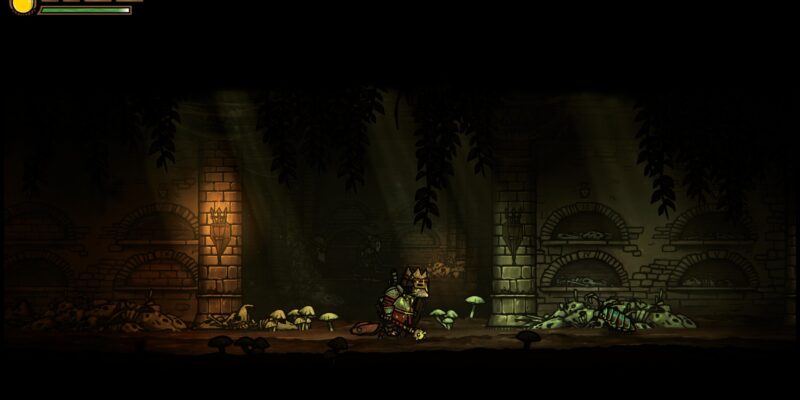 What’s needed for a game to be declared Souls-like? Brutal melee? Constant failure? A focus on death and rebirth? Estus flasks? Being featured in an Iron Pineapple video? Well, if combat is the key to Souls-dom, then Tails of Iron definitely has that in spades — and a lot of charm to boot.

In this game, you’re not the bearer of some curse that ironically makes being unable to die a bad thing. No, you’re Redgi, a rat prince. The frogs are invading your medieval ratte kingdom yet again, and your father is about to crown you the king. But everything changed when the swamp nation attacked. Now Redgi has to fight an uphill battle to reclaim the realm.

So, that’s what you do in Tails of Iron. In this charming side-scroller, you run around and beat up frogs, grubs, mozies (mosquitoes), and a few other similar enemies. To keep you in good health, you can take a swig from your bug juice flask (Redgi likes it with chunks). And if you die, you start over from the last save point, which takes the form of various benches with an attached blue lantern. No fancy respawn mechanics here — they just act like regular save points. 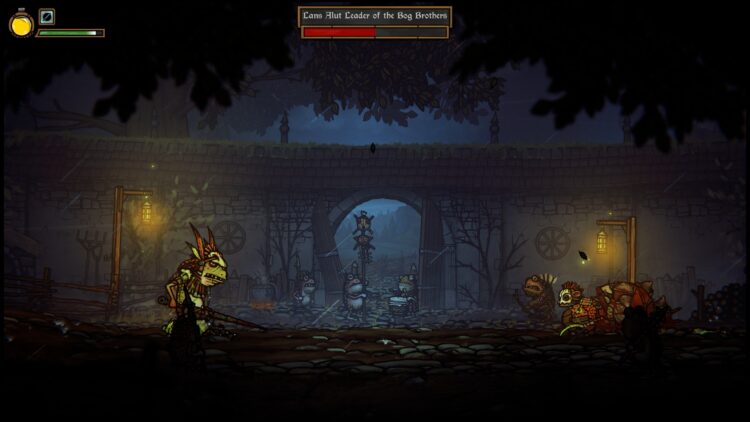 Redgi’s armor is cool more often than not

What do we squeak to the God of Death?

When fully armed and operational, Redgi will wield a one-handed weapon and a shield, a two-hander, and a ranged weapon. You can seamlessly switch between the melee implements, while ranged is just a bonus ability on top of those with limited ammo. Attacks can be simple or charged, and charged attacks with two-handed weapons stagger shielded enemies. There are no fancy combos; that’s actually something I like. Combos should stay in the fighting games where they belong. 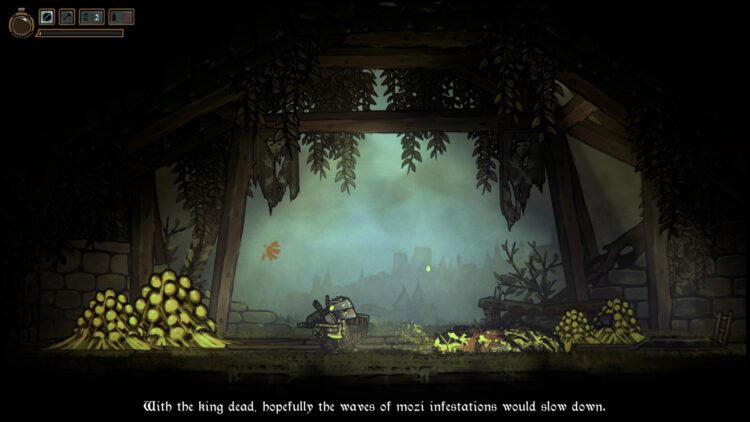 Bust a move after busting a skull

When it comes to defense, you’ll have blocking (available to either melee weapon) and dodging as well as dodge-rolling. In practice, Tails of Iron favors dodging over blocking. Sure, any regular attack (no effect), ranged (white spikes around the enemy), or special melee (yellow lightning bolts) can be blocked — and block parrying a special will lay the enemy flat for a time. However, bosses will have far more in the way of unblockable (red stripes) and undodgeable (red circle) attacks. Those are the real killer.

Undodgeable ones are a misnomer, as you can dodge them by dodging twice, making Redgi roll rather than scoot out of the way. And while the Tails of Iron’s tutorial is quite good, it doesn’t quite teach you everything. You can block parry regular attacks, though that doesn’t give you any major benefits. Meanwhile, charged two-hander attacks not only stagger shield bearers, but they can also interrupt unblockable attacks, stunning an enemy for a time.

Another Souls-ism is poison. It only exists in a single variety and makes the poisoned enemy take more damage from your attacks. You can only carry three doses at a time, so this limitation makes it an asset you need to use wisely. This is doubly so when poison refills are probably the rarest of resupply stations (in contrast, barrels of delicious bug juice appear at either two thirds or at least half of all save points). My pro strat is to save poison for boss fights, and then just dump ranged fire into them when the they’re below half health to make it end sooner.

Oh yes, Tails of Iron features a lot of damn boss fights. I doubt Odd Bug Studio would be legally allowed to call the game a Souls-like in the promotional material otherwise. However, the fights are not as asshole-ish or punishing as the genre implies. This isn’t exactly an open-world game, so you’re meant to beat the bosses to progress. While they may be tough, they’re very much crushable. Their balance might be questionable (the Mozi king side quest had me do probably the most retries in the game), but they’re never unfair. In fact, quite a few of the regular enemies will have prepared you for many of attack maneuvers the bosses will use. This, in my book, is a good thing. 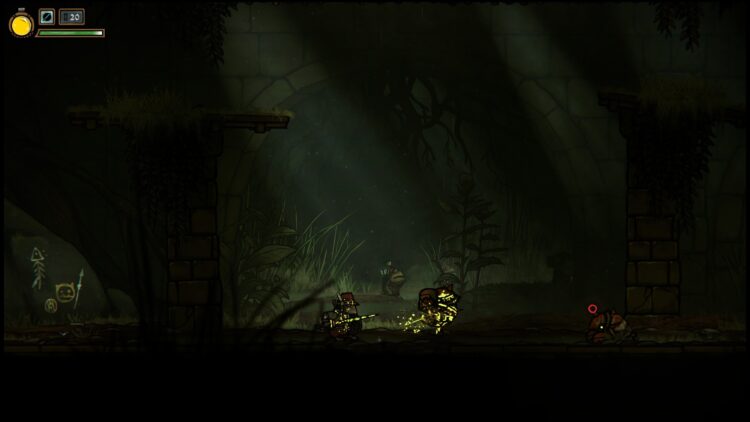 And it’s not like the regular enemies are just simple chumps! In Tails of Iron, anything other than the small grubs that serve as temporarily ambulatory bug juice repositories can and will kill you if you’re not careful. You may even encounter some of the early enemies much later in the game. While you can gain a sense of your increasing strength and skill as you defeat them, they’re hardly going to be pushovers. Aside from Mozies, who all have one attack each.

Speaking of skill, Redgi only improves as much as you do by which I mean that there’s no XP, no levels, nothing. What you can do is collect food ingredients for your chef brother to increase maximum health, as well as get better loot.

This is a Tails of Iron armory original piece

Loot is very much important, even if the stats tied to it are as simplistic as the rest of the game. Armor will have weight, defense, and resistance to an enemy type. And while protective gear is split into light, medium, and heavy categories, melee weapons are divided into swords, axes, and spears. Swords are your all-rounders, axes are slower yet more powerful, while spears are fast but weaker. Weapons just have a damage and a weight stat. The rest of the differences are implied, like axes having an overhead swing that makes it easier to clip flying enemies. 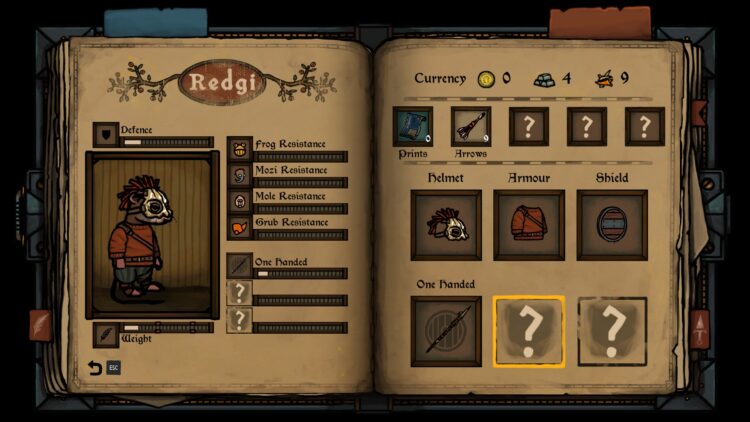 As a history nerd, I ran through most of the game with a shield and a spear, even if there was no fyrd to make a shield wall with.

Unlike in Dark Souls, the gear doesn’t have lore or even names. Check the stats, check the rarity (rare ones have better stats), and choose one that you like visually. Redgi came into possession of a crowned sallet fairly early on, and I used it the most simply due to me feeling a strange connection between it and Warhammer fantasy. 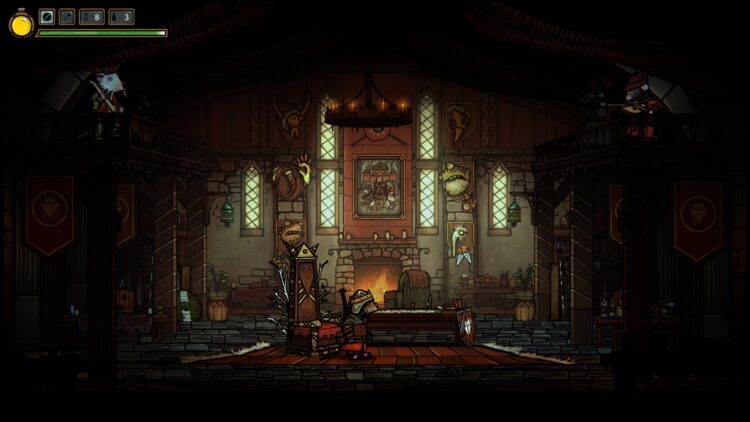 The helmet in question. Redgi is as cute as he is deadly.

You get weapons and armor from quest rewards, by bringing blueprints to the smith brother, defeating foes, or just by recovering them on the field. All of them are unique items, meaning there’s very little to the trade aspect of the game. You can buy ammo refills at the stores, but it’s a vestigial system, and you can easily restock by scavenging.

Unfortunately, you can’t really skip side quests, as there will be several major quests about collecting gold and the only way to do that is via side quests. So I don’t know if it’s fair to say that Tails of Iron has a main story that you can finish quickly with side quests that can expand your playtime. When you need to complete side quests to progress, that’s main story stuff!

Something’s rotten in the kingdom of Rats

And with this segue into the downsides of the game, we can talk about backtracking. While Tails of Iron spaces out save spots intelligently, there are only a handful of fast travel spots, so you will have to do some footwork. I figure this is the reason why you can stow your gear to run faster.

Speaking of gear, while I can appreciate not forcing a copywriter to come up with descriptions for a dozen identical spears, I would like more incentives to use different gear than just stats and visuals. And when there are only two stats that matter, a lot of weapons get left by the wayside simply because you already have better stuff. I’m a real fan of sidegrades, so it would have been nice to see some of that. 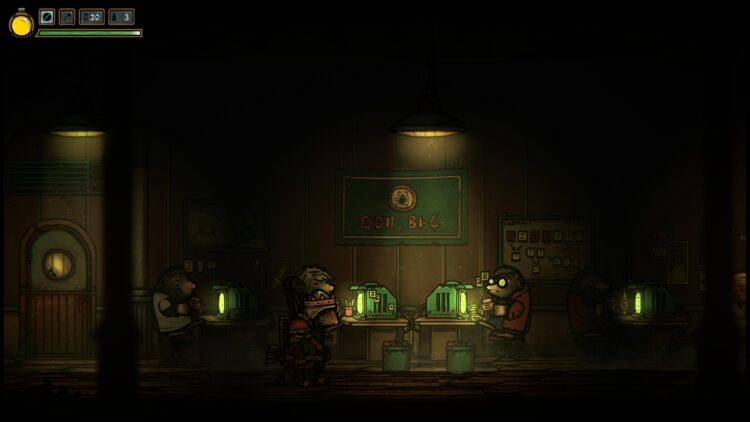 I’m a fan of how the developers inserted themselves into the game. Unfortunately, none of pet the rats that inspired the game survived the lengthy development time.

I also can’t really say how much the weight system in Tails of Iron impacts the gameplay. Redgi has three maneuverability categories based on how much his stuff weights, and I can’t say I ever made to the third, which presumably trades a lot of agility for protection. Partially it was because I always aimed for the lightest one. But by the end of the game I don’t think I had gear that would have made going heavy a rational choice.

And as a smaller aside, I’d like to say that Tails of Iron may have too little in the way of character interactions to really sell the emotional impact of sacrifices and losses along the way. However, it is no way as egregious as the last boss fight in Wingman that retroactively soured the entire game for me. I just wish there was more there, you know?

My heart, she is smitten

This is especially true because Tails of Iron is a relentlessly, remorselessly charming game. The art unerringly strikes right at your heart. I love the character models of all the rats and the moles, I love the environmental art with sweet little rat details, I love how dynamic backgrounds show the enemies you’ll face, or the musicians playing the theme you hear in game. I adore the stylized art of the speech bubbles and how Redgi, being the runt of the litter, has to reach up a little to open the doors in the castle. There’s love put into the areas you already visited, showing the transformation in both peasants returning to work the fields in the background and some traversable bridges being fixed for you to use. Even the travel loading screens are great. 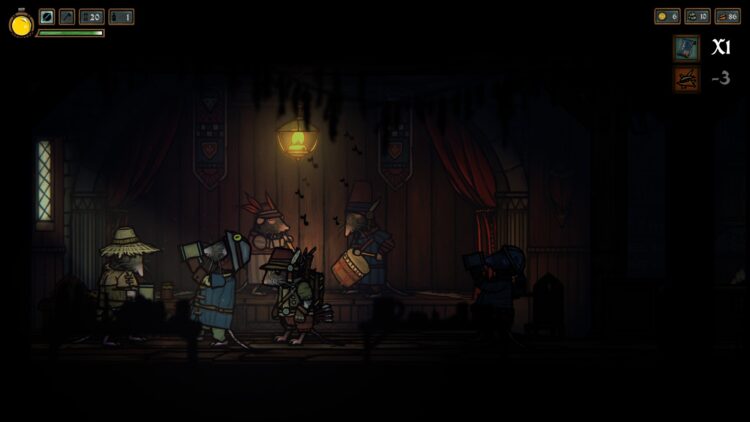 Oh, and the sound design matches it. The developer really knew how to get the best bang for its buck. Odd Bug hired but a single voice actor, the voice of Geralt of The Witcher fame, Doug Cockle, to voice the narrator. The rats and other characters communicate in chirps and pictorial speech bubbles, so this is a delightful combo that works really well in execution. The music is great too, with each area having its distinct theme and a bard you can find playing it.

Overall, Tails of Iron might be too easy for the dedicated Dark Souls maniacs, but it’s great for the rest of us. Most of the flaws I mentioned aren’t that painful while playing. More often than not, my heart was overwhelmed by all the positive feelings the game engenders. Wait, positive feelings? Truly, this is no Souls-like!

Tails of Iron could go deeper on the story and lighter on the backtracking, but if it ever gets a sequel I hope it maintains obvious love seen in the art direction and design.