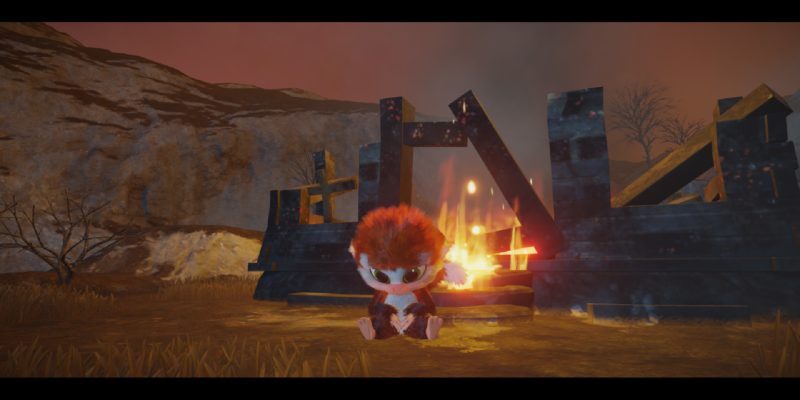 I was legitimately looking forward to Tamarin for a long while. I adore mascot platformers and it looked right up my alley. After beating it, I admit that its looks were insanely deceiving. It’s a collect-a-thon platformer in part, sure. But even then, it’s a very bad one. I was surprised to see that it was designed to be extremely reminiscent of Jet Force Gemini. It also does this badly. What we’re left with is a game of some lofty ambition that’s brought low by awful level design, one of the blandest game worlds imaginable, and gameplay that is multiple steps below its contemporaries in nearly every regard.

Tamarin places you in the fur of a cute monkey whose home was burned by an army of invading giant insects. The monkey’s three family members were also abducted for reasons never explained, and it’s up to you to get them back. Along the way, you’re aided by a hedgehog who has an arsenal of weapons that he supplies you with in exchange for a couple of item types strewn throughout the levels. The hedgehog is the only character in the game that talks, and you run into him whenever you need to unlock progression-related things.

The absolute best thing about Tamarin is that it’s actually a Metroid-like. The game’s world is completely interconnected, with new pathways consistently opening up that let you get around more easily. The hedgehog unlocks objects in the environment such as bounce pads, invincibility flowers, and switches that allow you to reach new places. The weapons he sells similarly open new doors. Although I hated the level design, some respect is owed due to how effectively and naturally the world opens up as you play. Along with how cute the monkeys are, these make up the only two good things about the game. 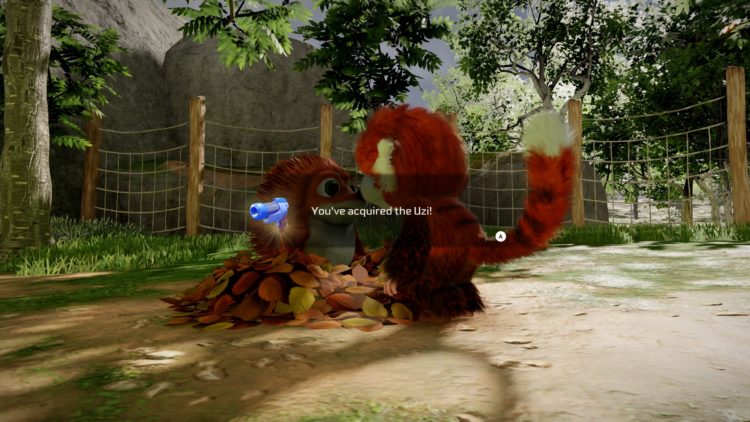 Gameplay in Tamarin is divided into two types. The more expected of these is the collect-a-thon platformer areas that are focused around you hunting down fireflies for the purposes of powering up statues that open new doors. You collect these fireflies by approaching them, holding a button, and then jumping on them. You acquire them via several means. Many are out in the environment, and you need to reach them or chase them until they stop fleeing from you long enough for you to grab them. Others require you to press a switch and create a single coin or many coins that you then need to collect on a time limit to make a firefly appear. The third requires you to collect birds in the other kind of stages, which I’ll get to later.

That mostly sounds like what you’d expect, I’m sure. However, the level design is consistently bland, dull, and confusing. At times it’s abysmal. There are only three of these areas. One is in a forest, another is in a forest by a lake, and the third is on a mountain. A terrible, terrible mountain. There’s no map and it’s easy to get lost and wander aimlessly in these places, as everything in them tends to look the same and be completely devoid of any sort of landmarks. Imagine someone randomly constructing the most basic outdoor area imaginable as quickly as they could, and that’s how the levels in Tamarin come across.

The mountain area takes all of the issues of the other two and quadruples down on them. The signposting is some of the worst I’ve ever seen and the coin challenges there require multiple stages of perfection. Actually getting to where you’re going takes up the majority of the time. I spent most of my playthrough doing this due to all of the aimless wandering. I didn’t even know how to progress at one point, because a climbable wall that I needed to interact with was nearly the exact same color as the rest of the wall. I couldn’t even see it. Furthermore, you have to climb up the mountain via prompts at specific spots, but finding these are insanely difficult as there’s no indication as to where they are. It’s truly one of the most miserable experiences I’ve had during a game in some time. 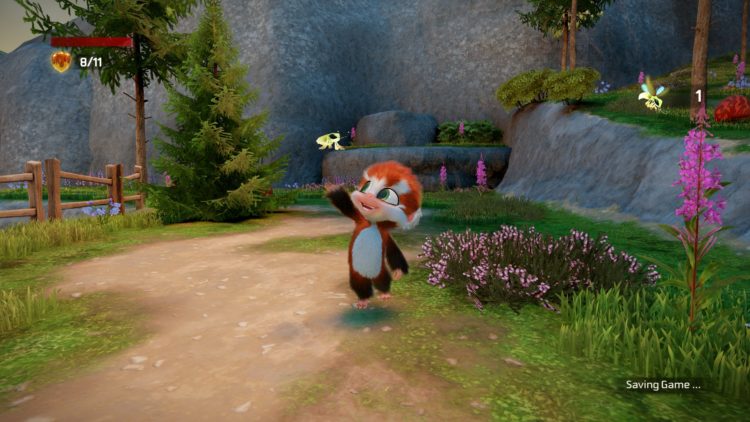 Getting the jump on ’em

Tamarin is further complicated by the platforming not being good at all. Tamarin can jump, roll forward, and lunge in midair. The jumping is poor and there isn’t much air control, which is a shame as most of the platforms require you to make very specific jumps. You can also hold a shoulder button and do a somersault to gain more height. I just never felt like there was enough control over the character, which led to the platforming being more of a huge chore than anything. You can also swim a little bit, which has a meter tied to it even though you don’t go underwater. Worse, you can’t jump all that high while swimming, which makes it difficult to get out of the water a lot of the time. There are also three enemies scattered around that you can roll into. They’re all boring and simple.

The other gameplay type, the shooting sections, aren’t quite as bad but are still bad enough. There are three of these, and they share some of the same problems as the platforming areas. The shooting handles like Jet Force Gemini. The shooting in that game hasn’t held up all that well, but it’s worse in Tamarin. The game was clearly designed with a controller in mind, as using a mouse just feels horrible and even more imprecise than the controller. You hold the left trigger and strafe to shoot at ants and giant bugs.

Speaking of combat, the shooting feels extremely inaccurate and enemies take variable amounts of damage. Sometimes they die quickly, other times they feel like they won’t go down. There are really only these two enemy types, with the ants having palette swaps. Purple ants that shoot you from a distance can be locked onto, which is weird since the lock-on doesn’t function the same on other varieties. Occasionally, swarms of small bugs fly in formation and you need to kill them all to open a door. The aiming is so inaccurate and finicky that these are just awful. 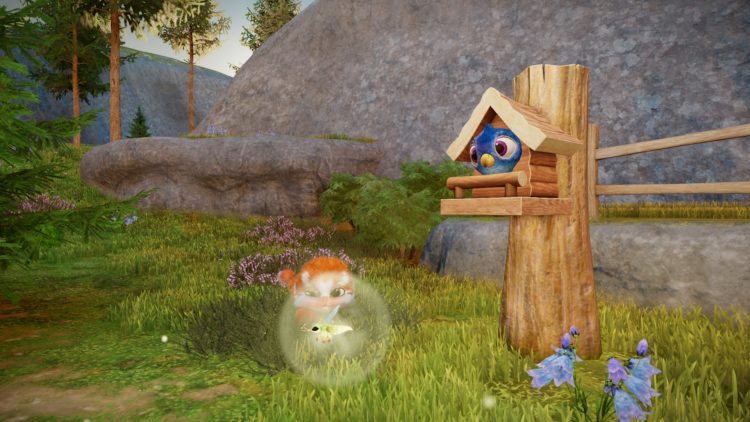 Bird is the word

The shooting areas in Tamarin are as basic as you’d likely guess. You move through areas that are disconnected from the rest of the overworld and shoot bugs. Here, you lose your entire moveset and get access to a couple of guns, grenades, shurikens, and a rocket launcher. Walking over enemy weapons refills your ammo and crates can also be found all over. Additionally, there are thin crates that increase a specific weapon’s ammo capacity, plus health capacity upgrades in both the shooting and platforming sections. Two of the three shooting areas are set in a totally nondescript, gray industrial location. As boring as the generic forests are, these are practically sleep-inducing.

Much like in Jet Force Gemini, you can find animals to rescue which the ants will frequently execute if you get near them. If they die, you need to restart the level from the beginning and try to save them again. But they are often placed in the line of fire, which makes it easy to kill them by mistake. Sometimes they even hang out near landmines, and I have no idea how you’re supposed to rescue them. For every three birds you find, you can put them in a birdhouse in the platforming areas for a single firefly. I hated saving the birds, as they die to the slightest thing.

There are checkpoints in these levels, but they’re often kind of far from one other. In the event that you die, you may have to replay a fair amount. Tamarin‘s shooting levels aren’t difficult at all though. They’re just tedious, dull, and insanely repetitive. The game ends with a long section of you returning to all three shooting areas before facing off against the game’s bosses, which are two big bugs that stand still and don’t attack you. I don’t know why they even bothered. The game took me seven hours to beat and it would have taken a lot less had I not spent so much time wandering aimlessly. 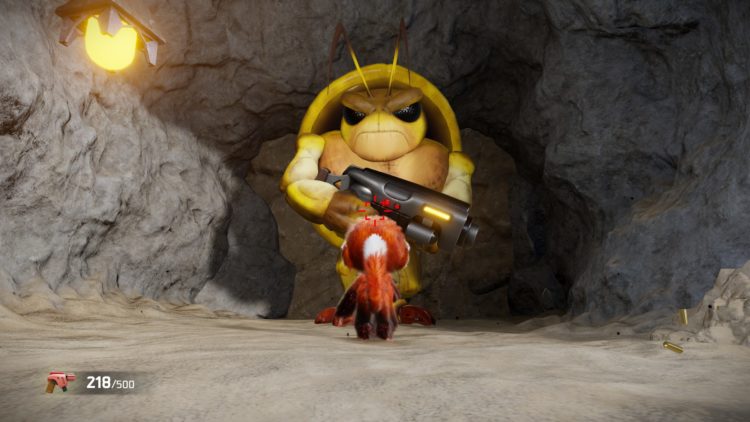 Tamarin is a pretty miserable experience. You couldn’t pay me to play it again. However, you could probably get me to pay you to not make me play it again. The platforming is painful, the shooting inaccurate and dull, the levels are as bland and confusing as possible, and there’s simply not much enjoyment to be had. I do appreciate some of what was attempted here but it boils down to a game that I can’t recommend to anyone other than people who love Jet Force Gemini so much that they have to play any game that’s remotely similar. The game even somehow has music by former Rare composer David Wise. Even though he didn’t do the music for JFG. Whatever. Let us never speak of this game again.

Tamarin has a very cute protagonist and an interconnected world to explore but the gameplay and level design are extremely poor across the board.

Cyber Hook will have you swinging when it releases this month