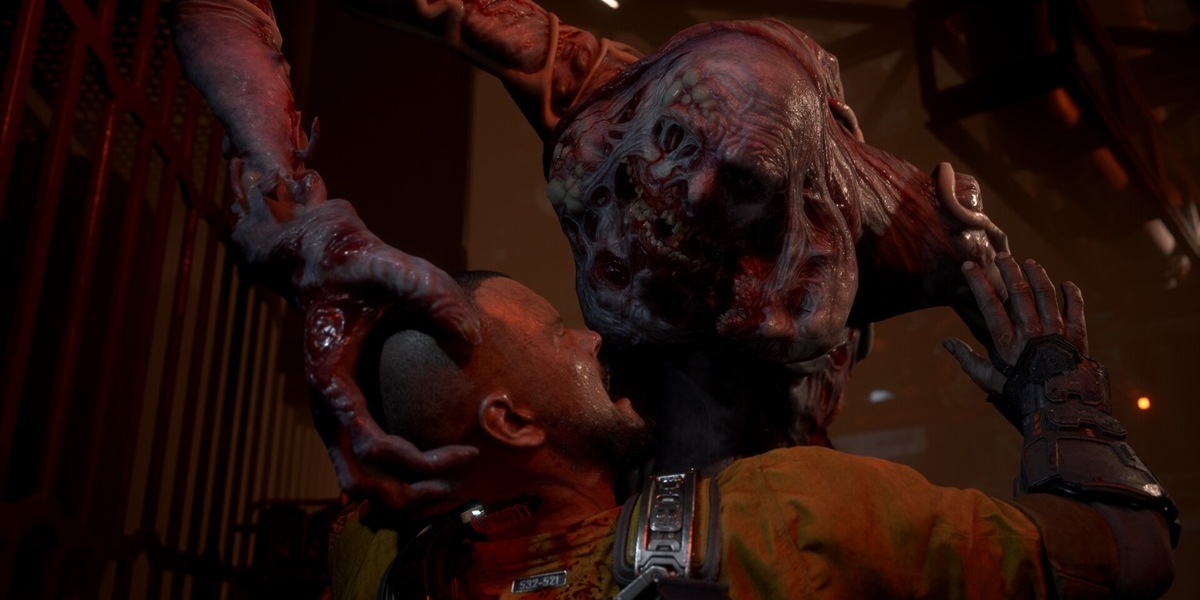 I’ll preface this review of The Callisto Protocol by saying that, as much as I love horror games, I never truly got into the Dead Space series. Prior to its launch, this sci-fi survival horror game from developer Striking Distance Studios and publisher Krafton was touted as the franchise’s spiritual successor. Still, given that I had no opinions about Dead Space that I held dear, I simply came in with an open mind.

I was left feeling a lot more disappointed. Partly, it’s because of The Callisto Protocol‘s oddly questionable combat mechanics and controls. Likewise, the campaign presentation and progression left a lot to be desired, not to mention some technical issues when it was initially released.

The Callisto Protocol puts you in the shoes of Jacob Lee. A cargo pilot at the wrong place at the wrong time, Lee is captured and sent to a prison on Callisto, one of Jupiter’s moons. It’s there that things start to go awry, as victims and guards start turning into misshapen creatures intent on killing each other.

From a storyline standpoint, The Callisto Protocol is about as cryptic as it gets. You know next to nothing about the cast of characters or the setting, though you could glean some info from scattered audio logs. Where it shines, however, is in terms of visuals and atmosphere. From dingy hallways and blood-strewn chambers to scorched yards and snow-swept cliffs, you’ll be kept on your toes, marveling at the sights and sounds, and wondering if something is still lurking out there.

Similarly, the UI is very minimalistic, as there’s no HUD clutter to speak of. Your health bar is represented by an implant at the back of your neck, along with your GRP charges (more on this later). As for ammo count, it’s simply shown when you draw your weapon. These design decisions certainly add to the immersion levels and cinematic feel. 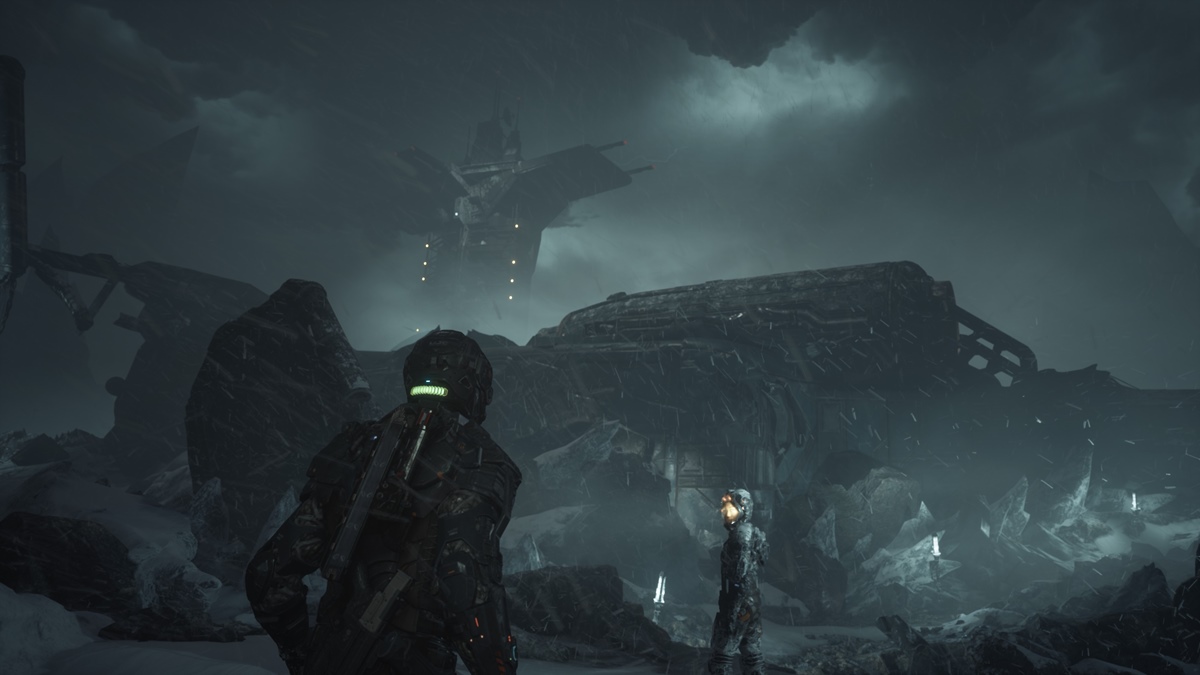 The atmosphere is also bolstered further by The Callisto Protocol‘s gore, violence, and enemy design. Everything is trying to kill you, whether it’s a beefy beast that can smack you around or the tiniest facehugger that pops up. With but a few weapons to aid you, such as your trusty Stun Baton, you’ll have to be mindful of your surroundings, too.

This is where the GRP — think of it as a Gravity Glove — comes in. You can use it to toss objects at foes to temporarily incapacitate them, or even explosives to quickly get the job done. Likewise, if you see traps in the environment, such as whirling grinders or spikes, feel free to push your enemies to see them impaled or have little giblets flying around. I was even impressed when some mobs, despite getting decapitated, still continued to lumber mindlessly.

Naturally, your character will also be on the receiving end of punishment. Fail some QTEs, and you could get your face and head ripped off. Move the wrong way while being flushed down a pipe by a torrent of water, and your body could get chopped in half. Dodge sideways next to a deadly contraption and, well…

For now, I should mention that there were some initial issues. Early on, I did experience quite a bit of stuttering, similar to what had happened to our reviews editor, Andrew Farrell. I was also told that he had problems with photosensitivity and, as such, wasn’t able to continue past areas with flashing lights. Stuttering issues did get fixed somewhat a few days later, which was when I hopped back on. Apart from these, I also noticed that Photo Mode images looked blurred and garbled, but only if AMD FSR 2.0 was enabled. In short, even if the visuals and violence catch your eye, there were still some nagging concerns. 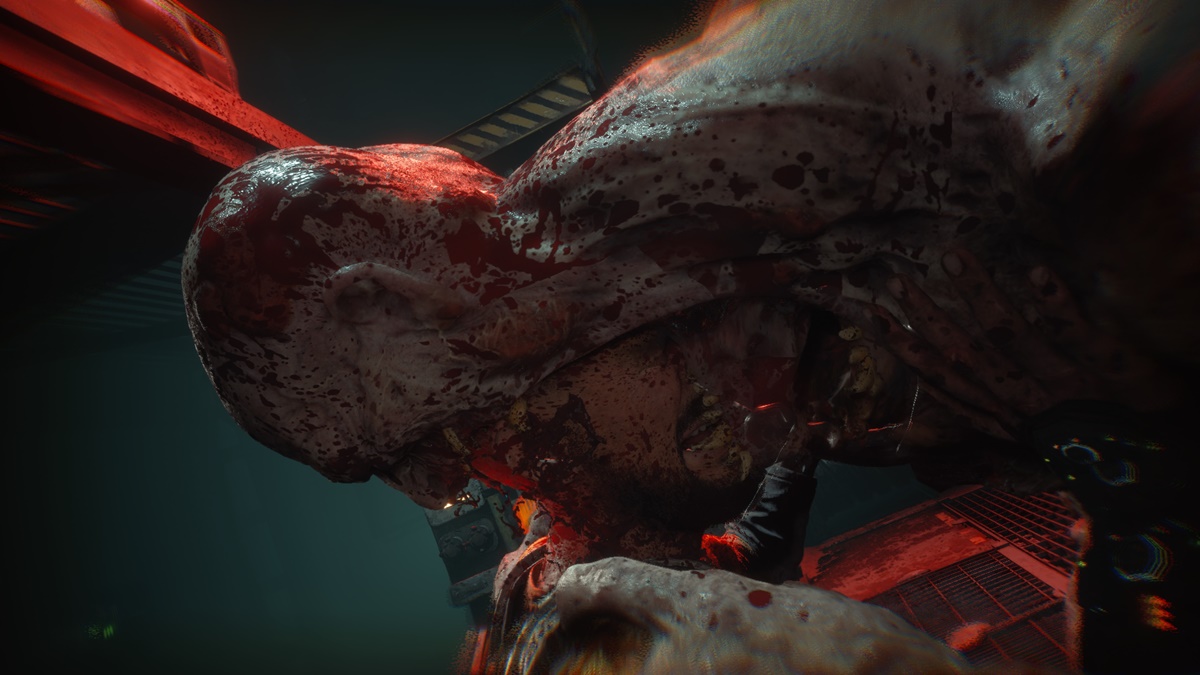 Putting the “d’oh” in d’oh-dge

Chief among the problems I experienced in The Callisto Protocol was the combat system. I genuinely couldn’t tell if it wanted to be a survival horror title, an action brawler, or an attempt at a new boxing game (i.e., a futuristic version of Fight Night or Punch-Out!). Basically, if a monster is aggroed, it will attempt to swipe at your character, so you’d dodge using the “A” or “D” keys, akin to a quick-time event (QTE) minus the prompts. Once you see an opening, that’s the time you follow up with melee strikes, and then you do the dodging minigame once more.

This is all well and good. The problem is that there are sections when you’re up against three or more enemies, often with a Spitter (i.e., ranged mob) spewing blobs your way. That means you can dodge an attack perfectly, but a projectile could still hit you. Alternatively, another enemy’s melee swing animation might connect. And it’s not like you could run away to plan your moves. Each combat sequence locks you automatically, so trying to move backward will only do a blocking motion, sprinting won’t occur because your weapons are drawn, and you can’t do a 180-degree turn.

Lest I forget, it’s also possible to accidentally do your dodging or attack animations into traps, leading to an unexpected demise. For instance, say there’s a spiked pillar that moves across a room. The only way to survive is by using the small niches when it passes, but these have enemies popping up. One good dodge to the side caused my character’s body to be exposed, followed by an instant shredding. 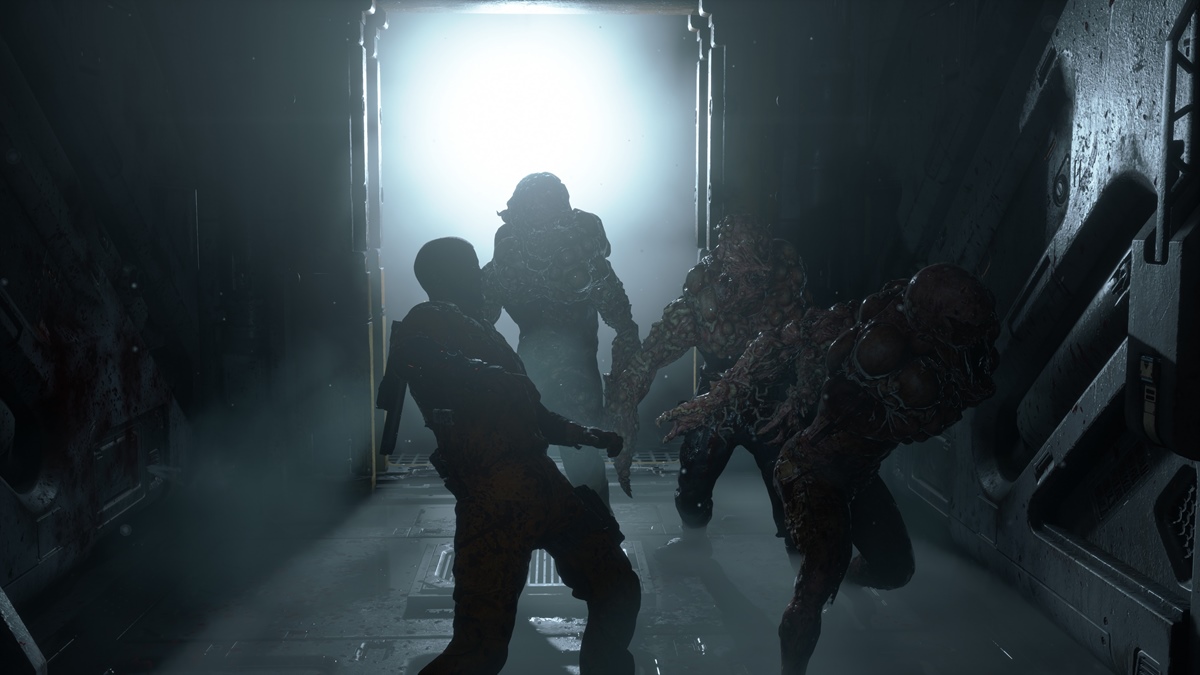 This is further hampered by the quick-shot mechanic, which encourages you to draw your firearm to shoot an enemy when it’s stunned. Again, this idea is good on paper but executed poorly. Since a stun animation causes the enemy to flinch sideways, your aim will also be off by a mile. This is remedied if you get a top-tier upgrade for the weapon, or you jerk your aim immediately, which defeats the purpose of a quick shot to begin with.

Moreover, creatures tend to mutate, denoted by tentacles sprouting out of their torsos. Again, you’d have to blast these as they appear. It works well enough, but there were moments when you’re doing the whole dodging thing, and the opponent that’s behind your current target is the one that’s mutating. As such, it boils down to taking the shot (and probably getting hit by the one you’re engaging), or completing both dodges and risking having a mutated monster waiting for you. All in all, having played and enjoyed a bunch of survival horror and Souls-like games, there is nothing worse than cumbersome controls when you’re trying to fight hostiles.

At least certain stealth sections were somewhat okay. When you’re being tracked by a gun-toting robot, you could sometimes move around an obstacle to confuse it (which is hilarious). Additionally, there are enemies that only rely on sound, so you can sneak up on them before a quick backstab. 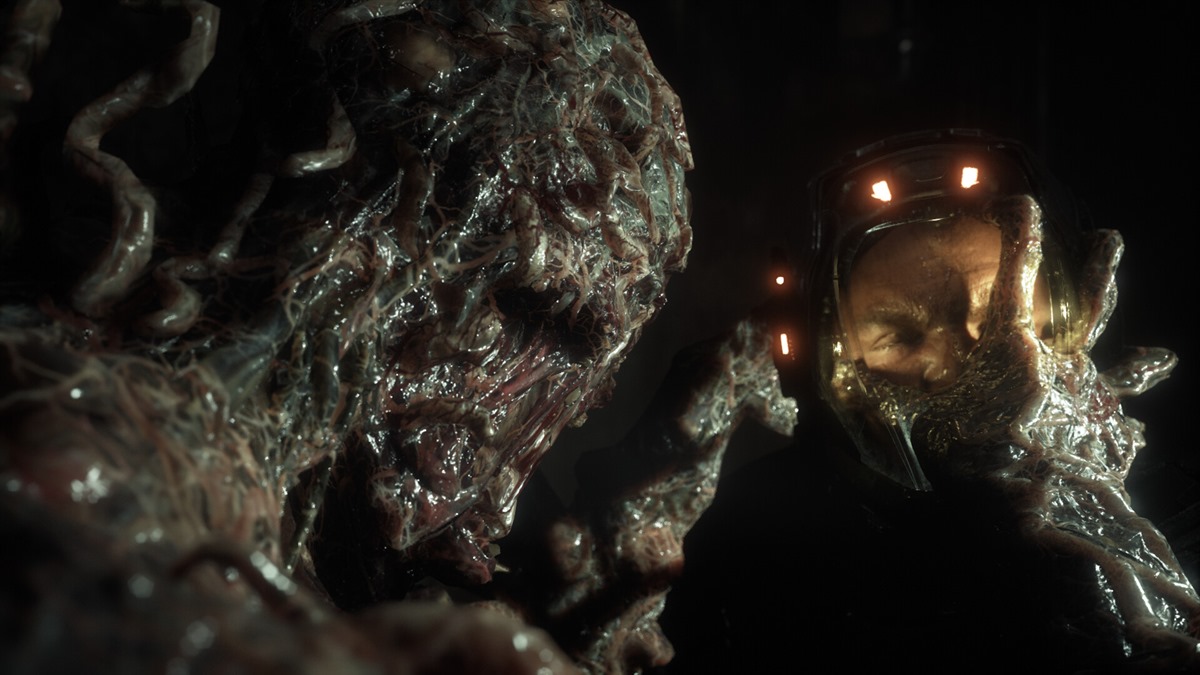 Other annoyances are tied to The Callisto Protocol‘s save system. Essentially, you trigger an autosave when you reach checkpoints. There’s a manual save, but it only saves your last checkpoint, not your current location or anything you did past that section. Your only recourse, therefore, is to find the next checkpoint, wherever that may be.

Here’s the tricky part. While the campaign is linear to a fault, some areas may have another room or corridor with some loot, whereas going the opposite direction leads to further progression (and a checkpoint/autosave trigger). If you see the autosave icon and go the other way to collect stuff/upgrade weapons, returning to the same spot won’t trigger a new autosave (the one you had minutes prior is the one that’s set). If you die or if the game crashes, then you’d need to redo the same actions or rewatch the same cutscenes.

This was definitely a hassle for me. There were times when I wanted to take a break or cover a different game, only to remember that reloading my Callisto campaign meant retreading the same path or battling the same mobs. I still don’t understand why such an archaic system is in place, and why manual saves were next to useless. 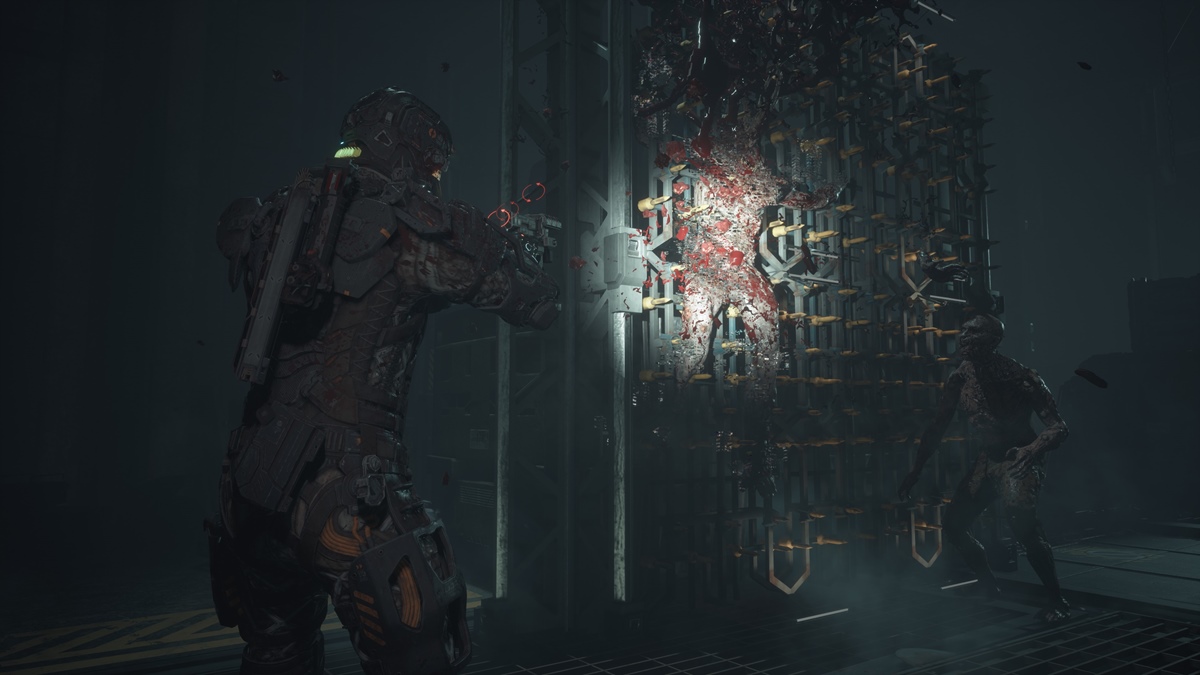 I appreciate what the developers attempted when they made The Callisto Protocol. As I’m not a Dead Space superfan, all I can say is that this game nails the visuals and the atmosphere of what it tries to present. Thanks to its eerie locations with a sci-fi theme, disturbing sound effects, minimal HUD clutter, and brutal deaths, it lays bare the viciousness of your foes, the grittiness of the setting, and top-notch, near-cinematic immersion.

Sadly, that’s where it ends. The combat controls are clunky at best, far from what you’re used to in this genre. It begs the question of why a separate dodge/block bind wasn’t implemented and it had to be tied to lateral movement. Additionally, the save system is more detrimental than helpful. There are also a few boss encounters that completely eschew what you’ve been doing the entire campaign (i.e., focusing on melee). Compounded by linearity and barebones objectives, it leads to a sense of futility and tediousness. 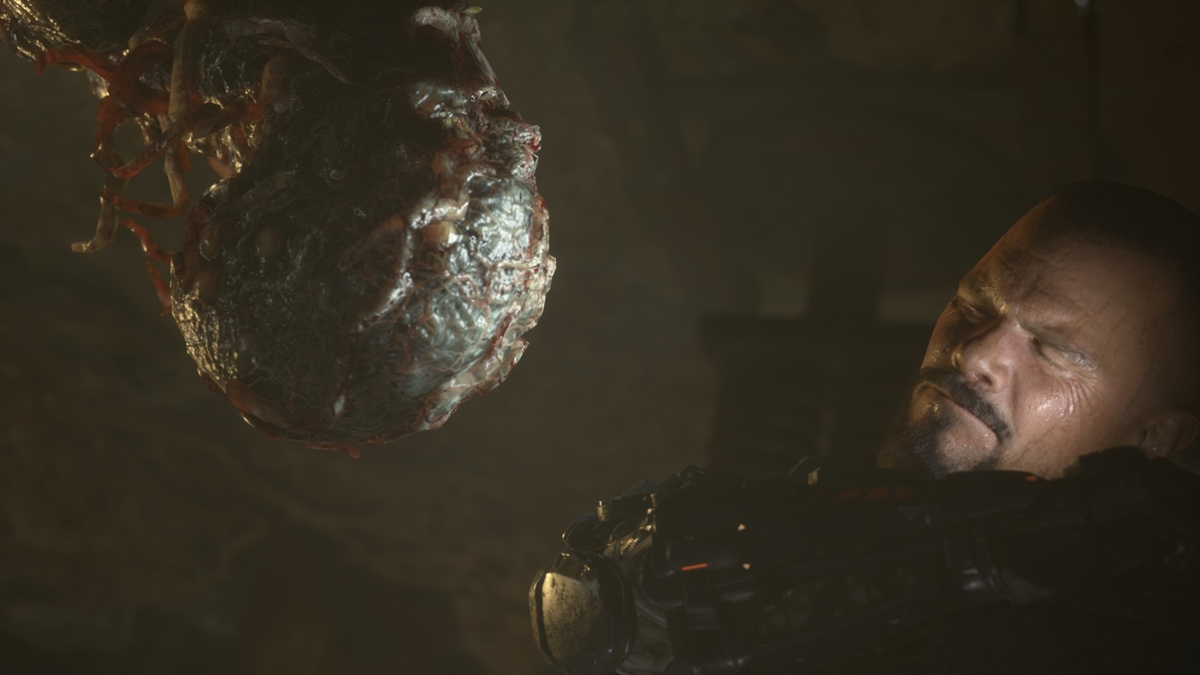 Amazing visuals and stellar atmosphere notwithstanding, The Callisto Protocol is held back by a cumbersome combat system, technical woes, and other issues.