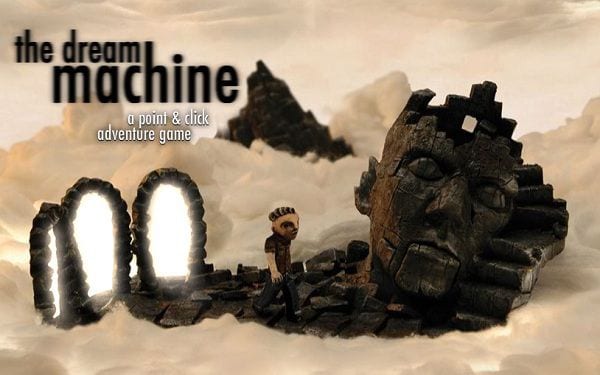 Every now and then each gamer encounters a title that (s)he knows from the very beginning (s)he’ll hate. Certainly that happened to me when I saw screenshots from The Dream Machine and I was like ‘meh’. That assumption, however, turned out to be one of my biggest mistakes ever, since the game was absurdly good! What’s the moral then? Never judge the book by its cover nor the game by the graphics and the first few minutes of gameplay.

The game opens without any intro or explanation, we’re just thrown straight into action. We see our protagonist – a man with a very strange hairstyle (totally bald, with a single curl at the front- but I’ve seen worse on the streets) – who appears to be stranded on a tiny deserted island. We’re not informed about any objectives, so, during a trial and error session we just walk around, collect wood, make a fire, etc. At this point I was pretty disappointed, but the feeling was premature, as the situation changes completely when we dig up a treasure. *Boom* and we land in a barely furnished, worn-out flat, where our hero, called Victor Neff, wakes up from a slumber. This is where the proper story begins. We learn that he just moved into a new apartment with his pregnant wife. Soon we begin to pick up subtle vibes that something is not quite right about this place, but we can’t put a finger on it. The atmosphere of creepiness thickens as the plot progresses and we desperately crave to find out what’s really going on. And we finally do… at least to a point. Let’s just say that the title of the game is not accidental.

The Dream Machine will consist of five chapters in prospect, but now only the first three are playable. The great thing is that each of them has a slightly different mood. The first one serves as an introduction and the tension slowly rises but never actually reaches the climax. We rather wallow in suspense and still hope for more. The second one, on the other hands, feels like a surreal ride on mild drugs. A surreal, though not psychodelic ride. To be honest I liked this chapter the least, mainly because not much really happens in it and the pace is just a bit too slow. But the third chapter totally won me over. We start as a stranger in a strange land and at first we just run around as an errand boy for other characters but soon we are put in charge of an investigation, which has a surprising, but also quite gruesome conclusion. I adore crime stories, which slowly unfolds their mystery, so I enjoyed that chapter thoroughly. All in all, the story in the Dream Machine is very interesting and I desperately want to know how it will end. Too bad that we have to wait God knows how long for the two remaining episodes.

The puzzles in the game vary. Most of them are based on our inventory – we have to find and collect various junk to use it later in an appropriate spot. Sometimes the combinations are pretty abstract and I admit that once or twice I discovered the solution accidentally while using ‘everything on everything’ randomly. Apart from that kind of challenge, we also find in the Dream Machine puzzles that demand some logical thinking and tampering with different kinds of mechanisms. It was one of the few games that actually forced me to make notes in order to come up with the solution. The difficulty isn’t, however, overwhelming. The game is a bit harder than what we’re normally used to in modern adventure games, but every puzzle can be eventually solved with a high level of patience. More impatient people will probably turn for help to some walkthrough.

What is also cool about the Dream Machine is that it has high replayability value for an adventure game. Each time you play it, solutions to many puzzles are different. So even though you know the plot already, the gameplay still may be entertaining. Also during the game we talk quite a lot to other characters and often we have a choice whether we want to play nice or rather be a typical douchebag. The outcome is usually the same, but our satisfaction with this little roleplaying element lingers on.

When I first saw the screenshots of this game I was genuinely put off. They seemed dark and ugly. It takes some time to get used to the specific style of the Dream Machine, but I eventually started to appreciate it. The game is made with cardboard and clay, so the graphics look very unique and fit very well to the story. The images are disturbing and gloomy and the people look quite repulsive – when I saw Victor’s wife for the first time I wanted to splash holy water on her while shouting ‘go back to hell you foul beast!’. Still, all of that creates a specific feeling of the game, which combined with atmospheric music, makes this game a really unforgettable adventure.

The Dream Machine is simply a great indie game and it’s worth having in your collection, especially since a few days ago it hit Steam, where you can buy it for peanuts. If you’re still not convinced, you can play the first chapter for free on the game’s official site. So don’t take my word for it, try the Dream Machine yourself and immerse into the strange, yet fascinating realm of dreams and nightmares.

Time for a Doctor Who: The Eternity Clock release date