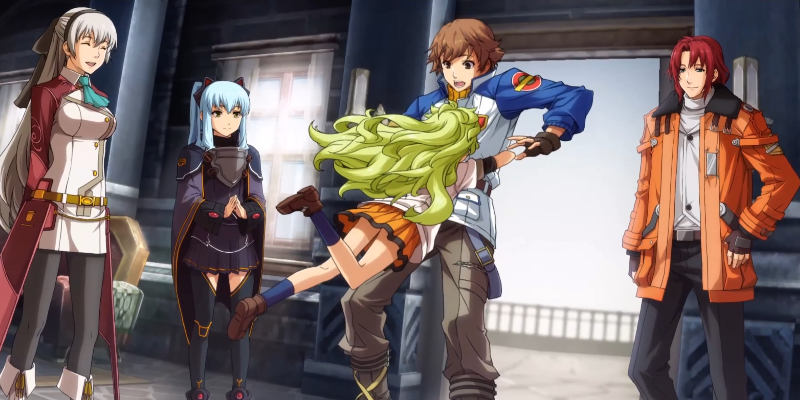 12 years ago Nihon Falcom released the fourth mainline entry in its Kiseki series, Trails from Zero. It is the successor to the original Sky trilogy which has since become renowned as one of the premier JRPGs of the 2000s. At least, that’s how it went down in Japan.

In the west, most people haven’t even heard of Kiseki and even fewer Trails From Zero. Despite its universal acclaim back home, Trails From Zero wasn’t released outside of Japan and China. The best we got was a fan localization by Geofront, which wasn’t finished until 2020, but that changes now. Over a decade after its original release on the PlayStation Portable, Nihon Falcom has finally given The Legend of Heroes: Trails from Zero an international release.

Trails from Zero follows the story of Lloyd Bannings, a young police detective who has joined the Special Support Section. The SSS is a newly founded branch of the police that is responsible for tackling the requests of the citizens of Crossbell. The group was created as a response to the ever-popular Bracer Guild outperforming the police, which caused the public to lose faith in the police and to rely on the Bracer Guild instead. The authorities hope that the SSS can outshine the Bracer Guild and regain the people’s trust.

It’s no secret that the Kiseki series is infamously hard to get into. Its greatest strength has always been its world-building and character development, but that comes at a cost. Starting out from scratch with no prior knowledge of the series can be overwhelming. The story will constantly refer to and introduce returning characters, and there’s fan service in the form of callbacks everywhere you look.

Although Trails From Zero continues this trend, it isn’t as prevalent as with the Cold Steel entries. The SSS is treated as an independent group with its own trials and difficulties to overcome. Outside of the occasional nod to the Bracer Guild, you can very easily get by without knowing anything about the prior games.

You might miss out on some fun references here and there, but they aren’t important to the overall narrative. Even if you do feel like you’re missing out, it doesn’t really matter because you can always go back to the Sky trilogy to fill in the gaps. Those games and Trails From Zero are pretty similar mechanically, so you’ll feel right at home.

Really, the only difficult part of getting into Trails From Zero is that it’s very much an old-school JRPG. It never holds your hand or makes much of an effort to point you in the right direction. You’re forced to figure things out yourself most of the time. This plays well into the detective sub-theme of Trails From Zero, but some players may find it frustrating. It all just depends on what kind of RPGs you personally like to play.

While similar, the combat in Trails From Zero is easier than it was in Sky. The main difference is that encounters feel way more fair. Good preparation and a decent amount of grinding will set you up nicely to overcome most battles. It helps that Elie MacDowell, a member of the SSS, has access to Holy Bullet, which is a contender for the most broken craft in the series. When used, it recovers everybody’s HP and CP, reversing the majority of damage you take.

Those looking for a more challenging experience can up the difficulty, and it varies from Easy to Nightmare. Easy makes most encounters very straightforward and is intended for players who want to just enjoy the story. In contrast, Nightmare requires near-perfect knowledge of Zero‘s mechanics, with even the game describing it as “nearly impossible on a first playthrough.” Both Normal and Hard difficulty sit in between for those looking for a more balanced playthrough.

Attacks in Zero are divided into normal attacks, orbal arts, crafts, and S-Crafts. To summarize, crafts are unique abilities, orbal arts are spells, and S-Crafts are ultimate attacks. It isn’t too difficult to figure out when to use each type of attack, as Zero does a decent job of breaking down how combat works during the prologue.

Much like Sky, and even Cold Steel, Trails From Zero offers a perfectly serviceable turn-based combat system. It’s by no means extraordinary by JRPG standards, but it doesn’t hold the game back either. Combat has never been the focus of this series, and if that’s what you’re looking for, I’d recommend alternatives such as Octopath Traveller and Bravely Default 2.

What Crossbell has to offer

While knowing the story and lore of each game isn’t necessary to play or understand Trails From Zero, the real focus of the Kiseki games is the story. I’ve said in the past that I believe the Kiseki games showcase the best world-building of any video game franchise ever made. The sheer depth of the series’ lore is far beyond anything I could justify in a few paragraphs. I doubt there are many people out there that knows everything about the story because there’s just so much to it.

That’s the whole charm of these games, Zero included. When a character from another game shows up or you pick up on a small reference it makes you feel as though you’re a part of something bigger. There’s a sense of community and shared knowledge that very few other franchises can compete with. With each new entry you play, you’ll uncover more about the past entries and begin to see the bigger picture.

For me, what makes Trails From Zero so impressive is that it maintains this strength without isolating newcomers. That’s not an easy thing to do, and it’s not something that the Cold Steel games do well. The fact that a series newbie or a franchise veteran can both jump into Zero and have an equally fun playthrough is something special.

Naturally, I’m not going to detail the specifics of the narrative by spoiling any big moments. Considering that the story and the world-building are by far Trails From Zero‘s biggest selling points, it would be a travesty to ruin it. What I can say, though, is that if you play JRPGs primarily for the stories they tell, then there is no better game to play right now than Trails From Zero.

More a refresh than a remaster

With it being a 12-year-old PSP game, you can imagine that Trails From Zero hasn’t aged perfectly. To counteract this Nihon Falcom has given Zero a fresh coat of paint. However, this isn’t a remaster or even a remake. Instead, the biggest difference is that this release of Trails From Zero benefits from visual upscaling that makes everything look sharper.

This visual upscaling is coupled with support for far higher resolutions than the PSP could ever dream of, uncapped frame rates, and anti-aliasing. Outside of performance enhancements, this new version adds some nice quality of life additions, too. For example, there’s now a chat log where you can look back on dialogue and replay it if you missed what a character said.

Unsurprisingly, Trails From Zero is not a demanding game. You can add all of the enhancements in the world, but when the core product is built on a 12-year-old handheld game, just about any PC can run it. Across the three devices that I tested Zero on, it ran perfectly at the highest refresh rate possible with no dips in performance.

As expected, The Legend of Heroes: Trails From Zero is a wonderful game. The story it tells, the world it’s set in, and the characters that you play couldn’t have been executed much better. Much like most of the other entries in the Kiseki series, Zero is a love letter to gamers who want to immerse themselves in a brilliant world. Even better, this particular entry manages to overcome the series’ biggest weakness by being a surprisingly accessible entry point.

The Legend of Heroes: Trails from Zero

Trails From Zero is a wonderful game that offers the very best story telling and world building that gaming has to offer. Its presentation and dialogue heavy gameplay won't be for everyone, but if you love a good story and are looking to get immersed in a brilliant world, look no further.