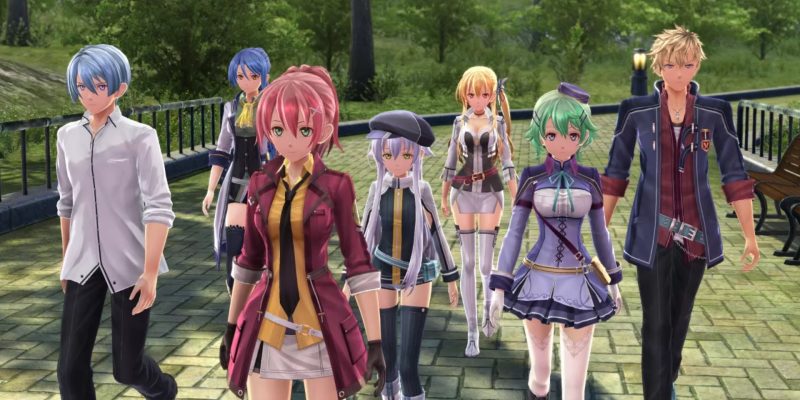 Japanese developer Nihon Falcom has been responsible for some of the most ambitious JRPGs over the last 40 years. Chief among them is the Trails series, better known by franchise fans as Kiseki. The unique selling point of the Trails games is that they place an emphasis on world-building and character development above all else. This design focus carries over to Falcom’s latest addition, Trails of Cold Steel IV.

The Legend of Heroes: Trails of Cold Steel IV is the fourth and final game in the Cold Steel tetralogy. It’s set directly after the events of Cold Steel III as both Class VII and new Class VII try to recover from the tragic ending of the last game. This time around, you’re tasked with bringing together the team once again to take down the head of the Ironbloods, Gilliath Osborne.

Any players coming straight from Cold Steel III to this sequel will not struggle to adapt. At their cores, both are very similar products. The combat mechanics, user interface, and HUD have effectively been copied over.

This isn’t necessarily a bad thing, as Cold Steel III‘s user interface was stylish and easy to understand. Honestly, I’d take anything over suffering through the atrocious UI present in the original Cold Steel. Aside from that, some vital balance changes have been made to make it harder to cheese battles. Cold Steel III had a problem where there were so many unbalanced mechanics that you could break the game’s entire balance with certain S-Crafts and Orders. Many of these have been nerfed to try and make fighting on higher difficulties more challenging.

Despite the lack of innovation Trails of Cold Steel IV does still have one of the better turn-based combat systems I’ve seen. Especially on PC where Persona 5 Royal isn’t available, this might very well be your next best option. Just be aware that the Trails series cares more about plot and characters than traditional JRPG elements like grinding and crafting. In that sense, it is definitely better suited to someone who values getting invested in lore over someone looking for the best gameplay available.

I do not exaggerate when I say that the Trails series is home to the best world-building you’ll ever see in a video game. And while I don’t think Cold Steel IV quite lives up to the standards of some of the franchise’s earlier games, this is still a real selling point for the game.

The main plot is interesting enough and adds plenty to the Trails lore. However, there are many RPGs out there that convey a compelling main story. What’s more impressive about Cold Steel IV, is its ability to maintain that level of immersion in all of its content. Yes, even the fishing side activity has lore attached to it.

Be it a simple character interaction or a side quest, everything in the Trails universe feels authentic. The NPCs don’t exist purely to give you quests or to sell you items. They are their own entities that have their own problems and their own solutions. Because everything and everyone is so developed, it’s easy to spend hours investing yourself in the world of Zemuria.

I could sit here typing paragraph after paragraph giving you specific examples of this in action. But I won’t, because that would be doing both the game and you a disservice. Since the main reason to play Cold Steel IV is for its second to none world-building, what’s the point in me spoiling that? Go ahead and see for yourself. I can assure you that if you are looking to invest a lot of time in a franchise to fall in love with, Trails is an excellent choice.

Unfortunately, its main strength is also its largest shortcoming. Getting into the Trails games is difficult with no prior experience. For one, I don’t recommend playing Cold Steel IV before at least Cold Steel III. Even then, there’s a fair argument that you should begin from the first game in this story arc.

Some more dedicated fans may even suggest that starting with the Cold Steel games isn’t the right way to immerse yourself. Instead, they’d argue that the best option is to go way back and kick things off with Trails in the Sky. The problem with such a recommendation, however, is that each and every Trails game can easily take between 60 to 100 hours to explore properly. Working through several massive games to play another isn’t going to be practical for everyone. This problem is made worse by the fact that neither XSEED nor NIS America has yet localized the full series. Both Trails From Zero and Trails to Azure have unofficial patches, but aren’t quite as well done as the official translations. This means that unless you’re willing to put aside a lot of time and effort to invest yourself in the Trails franchise, you’ll never be able to truly appreciate Cold Steel IV. This isn’t a knock on the game or the series but it is something to consider as a new player.

On the topic of translation, the localization of Cold Steel IV is outstanding. NIS America has done a fantastic job of conveying both the characters and story even after translation. Also, an impressive amount of Cold Steel IV is voiced, which is nice for those who don’t enjoy reading too much dialogue. Although if reading isn’t your forte, I’m not sure that the Trails franchise is for you.

Not your typical anime game

Most anime-styled JRPGs suffer from the same visual imperfections. They all have gorgeous character models, but have unattractive environments that wouldn’t look out of place in an open-world PlayStation 3 game.

Unsurprisingly, Cold Steel IV ticks off the gorgeous character model box. Given that the characters are half of the reason to play a Trails game, it would be sad if they didn’t look the part. This isn’t a problem though, as every character in Cold Steel IV looks great. As expected, a little more attention to detail was spent on the main characters, but even many NPCs who you only speak to once or twice have beautiful models too. Now I won’t say that the environments are perfect, as some of the open forests and passages leave a lot to be desired. But in the grand scheme of things, Cold Steel IV is a great looking game. The cities and towns in particular feature some beautifully crafted buildings and lore accurate architecture.

Coming off of the back of Neptunia Virtual Stars, I have recently been reminded of the fact that many Japanese developers just don’t port games to PC properly. Thankfully, the same cannot be said of Nihon Falcom.

The performance is excellent. As long as you meet Cold Steel IV‘s recommended system requirements, you shouldn’t expect to see any notable performance issues. The only area of concern is that anything less than 16 GB of RAM can produce frame skips in more demanding areas. Although given the sheer scale of Cold Steel IV and the fact that games are becoming ever more demanding, this is forgivable.

The finale we needed

The Legend of Heroes: Trails of Cold Steel IV is a fantastic game. Outside of the plot, not too much has changed from Cold Steel III, but that’s mostly fine since that was also a great game. The gameplay balance tweaks and the addition of over 100 hours of new lore-related content more than make up for it.

Honestly, the only scenario in which I’d hesitate to recommend Cold Steel IV is if you haven’t touched the Trails series before. If this is the case, consider looking into Trails in the Sky, Cold Steel I, or Cold Steel III as better entry points instead. Otherwise, this is one of the best JRPGs I’ve ever played. Its legendary world-building and character development are enough to justify the purchase. Combine that with its still very serviceable gameplay mechanics and turn-based design, and you’re left with a game that is well worth playing.

The Legend of Heroes: Trails of Cold Steel IV

Although it would have been nice to see a little more innovation from Cold Steel III, this finale to the Erebonia arc is still one of the best JRPGs I've ever played. The world-building and character development are as exquisite as ever, while the gameplay mechanics are still well above average, albeit unextraordinary. Regardless, assuming you have played at least Cold Steel III and know enough about the Trails lore, this latest addition is well worth your time.