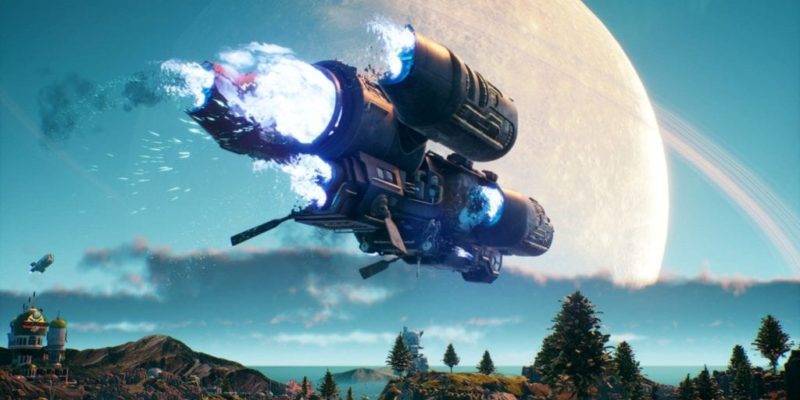 I want to say something about The Outer Worlds right from the off: it’s a good game. It’s a flawed game, and one that lacks some inspiration, but it’s still a good game. When I’m complaining about the combat or the user interface, do bear that in mind.

Also, I need to apologize because I’m going to endlessly compare The Outer Worlds to Bethesda’s Fallout games. In large part, that’s because it wears its inspirations from that series on its sleeve. Hell, it can be fairly accurately described as a far more constrained Fallout game with some ideas yanked out of BioWare’s digital melodramas.

So yes, The Outer Worlds is good. Yes, it’s very Fallout. And yes, “but” is going to be added to a lot of sentences. 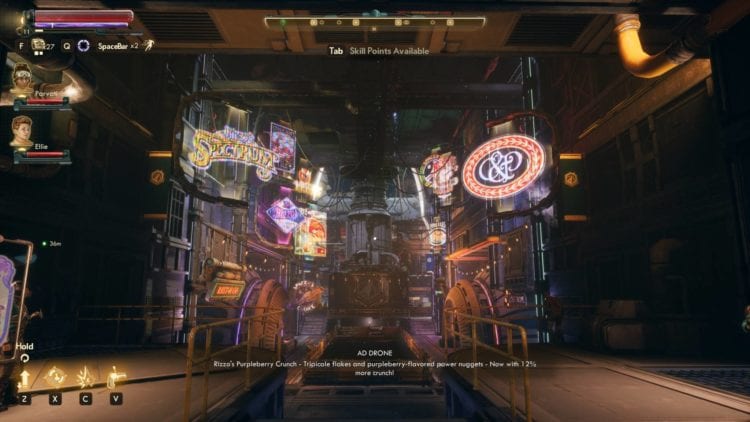 The far future: where ads are even more in-your-face than now.

One thing I absolutely can’t fault is the premise. In The Outer Worlds, you’re one of a slew of hapless colonists sent to a distant cluster. Unfortunately, something happened with your particular ship, and it turned up 70 years too late – and the now-established locals have no real idea how to revive you or any of the other thousands left in cryostasis. After that long in deep freeze, conventional revival techniques prove a bit liquefying.

They also have no real desire to revive you. The colony has enough problems of its own, and more than that, it’s quite literally owned by corporations. The amount of red tape is staggering: eating the food of a rival company is a punishable offense, and even things like graves require regular rental payment. It’s no surprise that the shining jewel of this particular cluster – a place where the rich live in luxury and do very little of importance – is called Byzantium. It’s played for both horror and laughs: terrible things happen and the state of the colony is frankly abysmal, but it’s hard not to chuckle when you find a secret lab… which is emblazoned with a giant neon sign declaring it as a secret lab.

In the middle of this bureaucratic clusterfuck, you get revived by the rogue (and very wanted) scientist, Phineas Welles. Congratulations: you’ve been conscripted on a mission to revive everyone else on the ship, and hopefully save the colony. If that’s what you want to do, anyway…

Out of this world 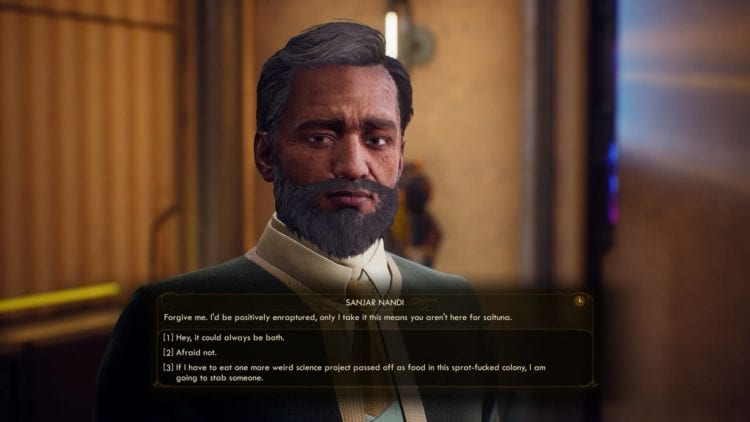 Most dialogue options don’t really alter conversations, but it’s always nice to have “exasperated” as a choice.

Thankfully, you’re not forced into this path. The Outer Worlds is very, very good at letting you act how you want and finding ways to keep the game going regardless. You can opt to betray Welles as soon as is humanly possible and start working for someone else instead. You can murder any NPC you like at any time — assuming you can reach them (Welles and a few others will, for most of the game, only talk to you remotely).

For my second playthrough, I opted to viciously dispatch literally every living person I could find in the initial area of Emerald Vale. On the one hand, The Outer Worlds did make note of the deaths of the faction leaders and reacted to this accordingly in the future. On the other hand, it didn’t really register my horrible massacre. Bah.

This hands-off approach works rather well, though, if you like to go off the rails. While my first playthrough was straight-laced, my second was full of ridiculous backstabbings, both literal and metaphorical. Aside from brutally destroying anybody because it seemed amusing, I’d accept quests, complete them, murder the quest-giver and swap sides, and… well, yes. And I’m faintly impressed that The Outer Worlds managed to keep up with my manic idiocy. 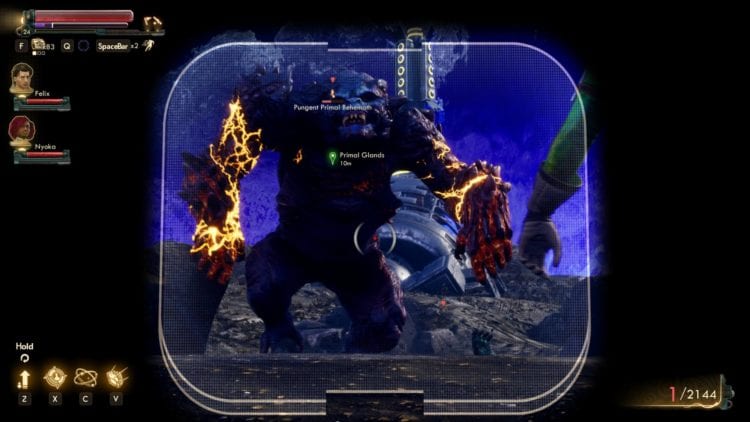 This would be more impressive if I hadn’t fought quite a few of these things already.

It has its limits, though. Playing as a low intelligence character gives you “Dumb” conversation options, but unlike older CRPGs where this would hugely limit your conversations, here it just occasionally gives you an extra dialogue option. You can mostly say the exact same things as “smart” characters, and even converse intelligently about science and medicine if you have those skills, and then throw in an idiotic option.

In terms of actual gameplay, The Outer Worlds… well, it’s basically Bethesda’s Fallout, but the open world has been replaced with a host of smaller maps. No, really. If you’ve played Fallout 3, 4, or Obsidian’s own New Vegas, the gameplay will feel startlingly familiar. That’s true right down to having hundreds of things to pick up and then try to organize while struggling with a really, really irritating inventory UI. You even hold down Reload to holster your weapon. 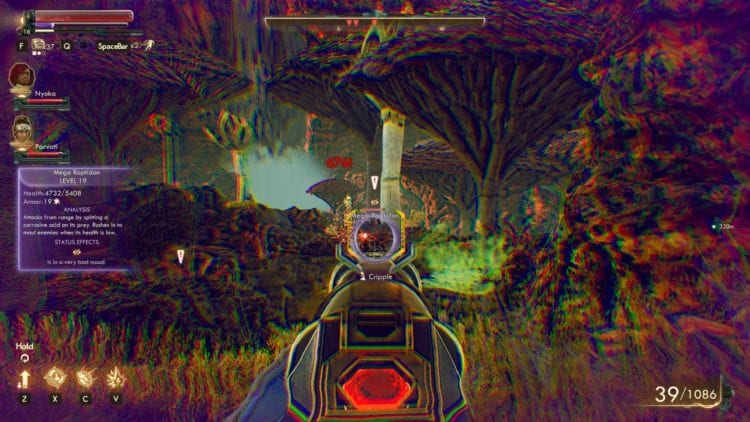 There are differences and improvements, but this still feels like Fallout 1.5. As an example: instead of VATS, you have Tactical Time Dilation, which lets you slow everything down and take careful aim at a body part of your choice. But here, the aim is manual. The plus side is that going for the head isn’t necessarily the best move: every extremity affects an enemy differently, and the effects even change based on your weapon. A headshot can blind an enemy, but smacking them in the torso with a giant hammer can knock them prone, leaving them defenseless against further attacks. The problem is that it doesn’t really feel like a blazing sci-fi gun battle. Most weapons lack heft and enemies don’t particularly react to being hit, so combat feels rather lackluster. A problem, as it’s what you’ll spend a lot of time doing.

Bonus points go to the camouflage shroud, though, which lets you walk into restricted areas unnoticed. Each bit of movement drains it, and when it reaches rock bottom, the next person to spot you will interrogate you. I mean, you can always shoot your way through, but it’s a neat way of working around stealth sections by using careful movement and dialogue instead. (And stealth or gunplay are always options, of course.)

Taking from other worlds 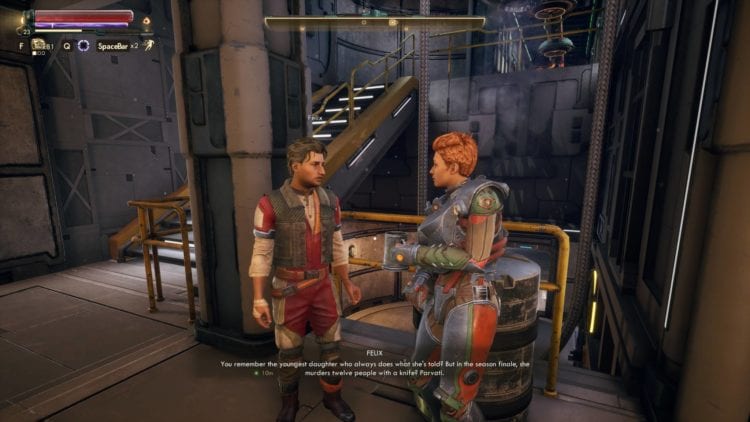 There’s always some sort of crew interaction going on when you visit the Unreliable, and it takes a while before they repeat.

In a more BioWare twist on things, you have a hub base: your ship, the Unreliable. Your companions gather here, and you can find them interacting with each other or go on their individual quests. A couple of these quests are lengthy, interesting, and excellent; the same goes for a couple of characters. Others, conversely, are practically cardboard cutouts with zero personality, featuring quests that are resolved almost immediately.

You’ve got someone who is pretty much Kaylee Frye from Firefly, and she’s glorious. There’s a gun-slinging pirate doctor, who is equally glorious. Both have fun and interesting quests that shed some light on both them and the larger world. And then there’s… a sports-loving rebel who hates the governing Board. That’s close to his entire character arc. Um.

Much as The Outer Worlds pushes these characters as very varied in combat, the truth is that they’re all fairly similar. There are some minor differences in health pools and they’ll give different buffs to your stats, but aside from a single special skill, you can otherwise outfit them with whatever you like and they’ll perform just about as well.

One of the better improvements is in character creation and growth. Skills cap out at 100, and up until 50 every skill in a “set” gains points at the same time. If you’re focusing on ranged weapons, then handguns, long guns, and energy weapons will level up simultaneously until 50. This means you can bulk up your skills and spread things around quickly. With some very useful abilities (repairing gear in the field, selling items to vending machines) unlocking every 20 points, it borders on necessary. Not only that, but your ship has a handy respec machine tucked away, so you can switch things around should you decide your current build isn’t for you. 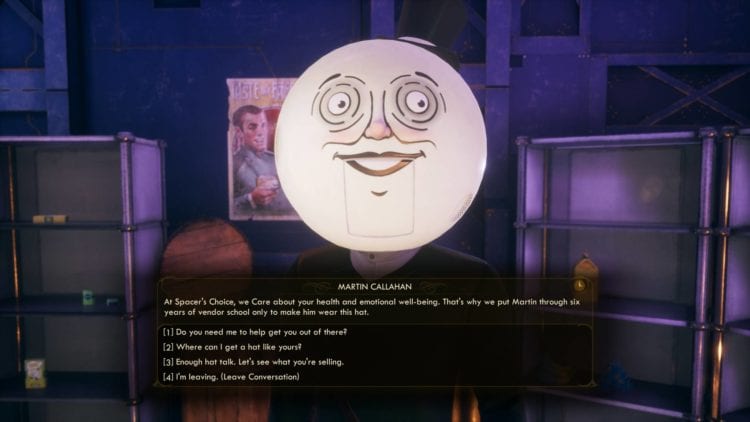 The ludicrous limits of the corporations still amuse me.

But for all of these welcome additions, there are plenty of times when The Outer Worlds feels like it either lacks ambition or needed a bit more time. Buildings and dungeons feel like prefabs; at best, they’re built out of identical rooms. Even some set-piece rooms – like a gory vivisection area you may wander into fairly early on – pop up again in later dungeons.

Enemy types aren’t particularly broad, either. There are mutant ape enemies, mutant insect enemies, and mutant lizard enemies, with a few sub-types in each group. It’s not the most diverse or eclectic set of foes, and while a Mantiqueen is impressive the first time you see one, they quickly grow a bit stale.

And then there are some subplots and hints at ulterior motives that go exactly nowhere. There are characters, like the companion mentioned above, that barely deserve to be called “characters.” And despite the efforts at revitalizing the combat with the Tactical Time Dilation gubbins, it still feels very much like Fallout; weapons often lack a feeling of impact or strength. It feels like you’re clicking and watching health bars go down rather than engaging in a frantic firefight. 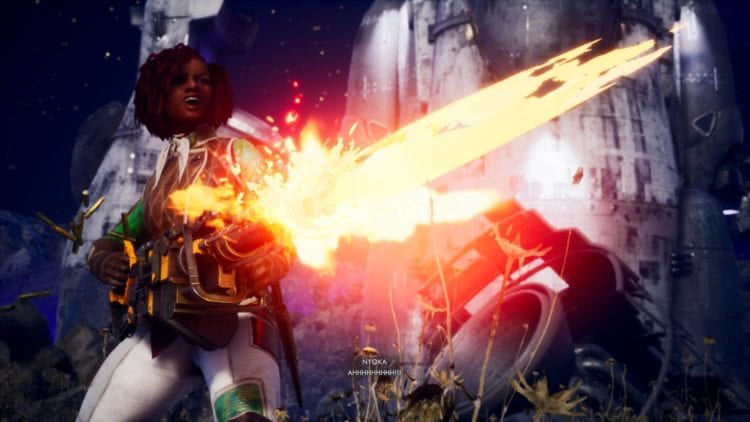 Add some Power Armor and this would be very Fallout.

Which is why I’m so torn on The Outer Worlds. Some of this is perhaps just disappointment: I expect a lot from Obsidian because of just how bloody good they can be. There are bits of this that are, absolutely, as good as I expect – the critical path stretching to accommodate your silliest urges, for example. But I wish the combat was more exciting and that areas were more diverse. I wish there was a quest to rival Fallout: New Vegas‘ Beyond the Beef. I wish I could compare shop items to what I have equipped without memorizing the numbers, backing out of the shop, and going to my inventory. I wish my inventory wasn’t full of 30 kinds of cereal that have the same status boosts. I wish, I wish, I wish.

Nonetheless, remember what I said at the start: The Outer Worlds is a good game. It’s an enjoyable, amusing, and regularly chaotic romp through a fascinating take on unchecked corporate rampancy. I just would’ve liked to have been able to describe large parts of the gameplay as “innovative” rather than “serviceable.”

An enjoyable adventure, but one that hews a little too close to its FPS Fallout roots.