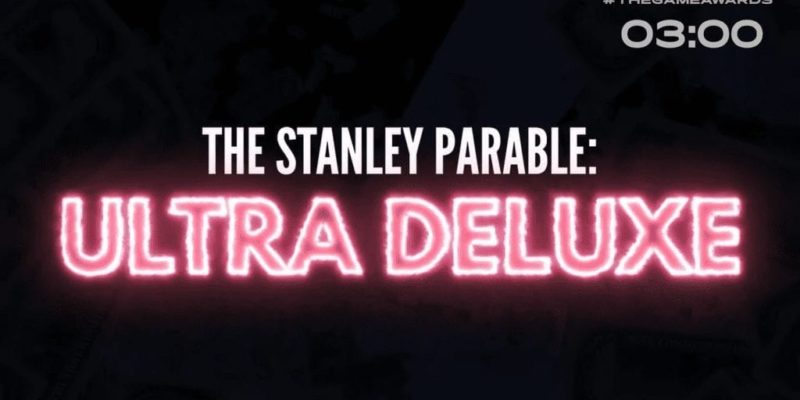 The Stanley Parable: Ultra Deluxe is coming to PC, The Game Awards revealed. Wait, does this really count as a “premier” game reveal? Oh well, let’s just say it is.

From the short teaser video, we see the return of Stanley as well as our friendly narrator. Yes, Kevan Brighting once more jumps onto the role of the calm, snarky voice of the game. And he wants money.

Of course, we won’t be paying for some spruced up graphics. Not just spruced up graphics, anyway. The Stanley Parable: Ultra Deluxe will include new endings and more choices to make (or not make) throughout our favorite desk jockey’s journey.

Still In The Broom Closet

The original Stanley Parable launched on PC back in 2013. It gained immediate notoriety, not just for its witty sense of humor, but as a parody of video game tropes. You can follow the narrator’s hints and instructions, such as going down a hallway to the right, or “fight the power” and take a left. The narrator followed your every decision, and you open up the world and discover its secrets every time you play the game.

The Stanley Parable: Ultra Deluxe will bring all that and much more. Though, I wonder if it’ll still have that one particular achievement. You know the one I mean? It was called “Go outside,” and it, erm, challenged you to not play the game for five years, then boot it up again. A lot of people were able to claim that achievement recently, back on October 17, five years after the game released.

Some people already had it before then, editing BIOS clocks in order to trick the game into releasing the reward. Since this game is now heading to consoles – which, admittedly, is about 75% of the reason why the new edition exists – it looks like more players will know the fun of not playing The Stanley Parable.

But for those who haven’t played this narrative masterpiece yet, this will be your best option. Look for The Stanley Parable: Ultra Deluxe to hit PC in 2019.