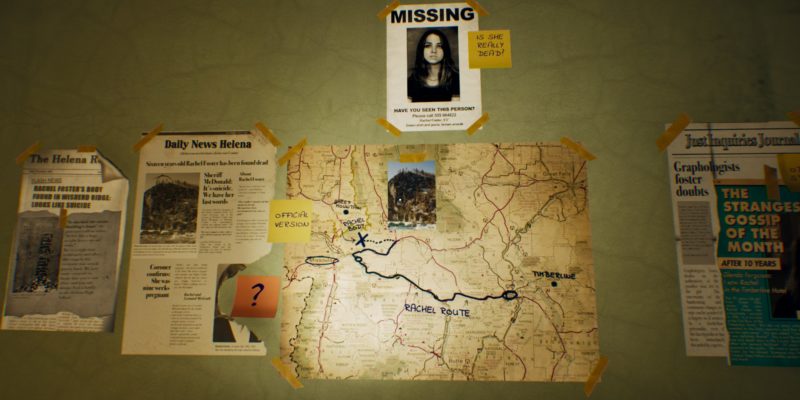 The Suicide of Rachel Foster begins with a splash screen about self-harm and the number for the suicide hotline. There have been a fair amount of games in recent years that attempt to handle very delicate subjects and this one appears to have that in spades. So, I sat back and prepared myself for some feels.

But they never showed up. The game’s title, subject matter, and that early splash screen are highly misleading. While it’s easy to assume what the game’s focus is going to be at the outset, the truth is that The Suicide of Rachel Foster is more of a mystery thriller than anything. And with those, you can’t exactly judge a book by its cover. But, as a mystery, it’s a damn good one, set in a memorable, well-designed location and filled with entertaining dialogue and enjoyable details.

The game’s story begins with the player character, Nicole Wilson, reading a letter from her deceased mother that was delivered once her estranged father, Leonard, passed away. The opening switches back-and-forth between reading the letter to a top-down view of Nicole carrying a black umbrella and walking through a crowd of mourners at the funeral. It’s a stark, memorable beginning that sets a somber tone. 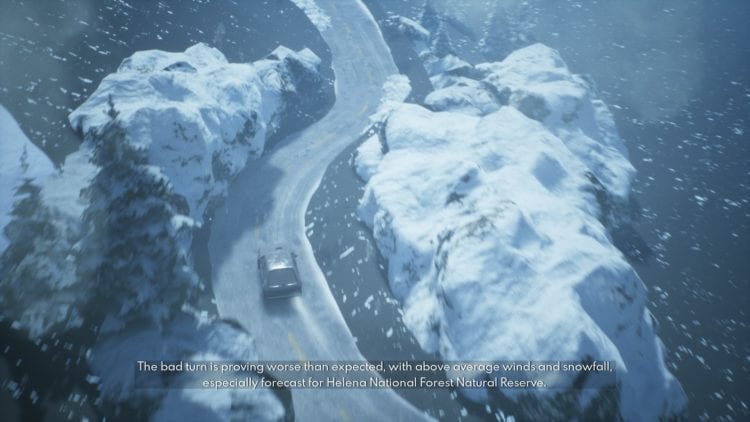 “Oh, sure, I’m driving to a secluded location DURING A BLIZZARD, but what could possibly go wrong?”

Leonard has left Nicole the Timberline Hotel and her mother wishes her to sell it and then give the proceeds to the family of Rachel Foster. Rachel committed suicide at 16 after it was discovered that she and Leonard, who was 49 at the time, were having an affair. Nicole and her mother left immediately and cut off all contact. Pretty heavy for a game, I know. Nicole then travels to the Timberline in order to meet with an attorney and inspect the place prior to selling.

After only a few minutes there, however, a heavy blizzard sets in and Nicole, who wants nothing to do with the place or with memories of her father, becomes trapped there for five days. The only company she has comes courtesy of her modified childhood phone that she uses as a two-way radio to communicate with a FEMA representative named Irving who wants to make sure she survives without issue.

Alone in the halls

I thoroughly enjoyed the story in The Suicide of Rachel Foster. Nicole and Irving are both well-voiced and their banter is quite good as well. Nicole is a bit of an extremely sarcastic ass at times, but in a believably likable sort of way, while Irving is kind, patient and a bit at-odds in regards to how he should communicate with her. As the days go by, Nicole naturally finds that some things don’t quite add up pertaining to how the events surrounding Rachel came to pass and she decides to try and figure it out. 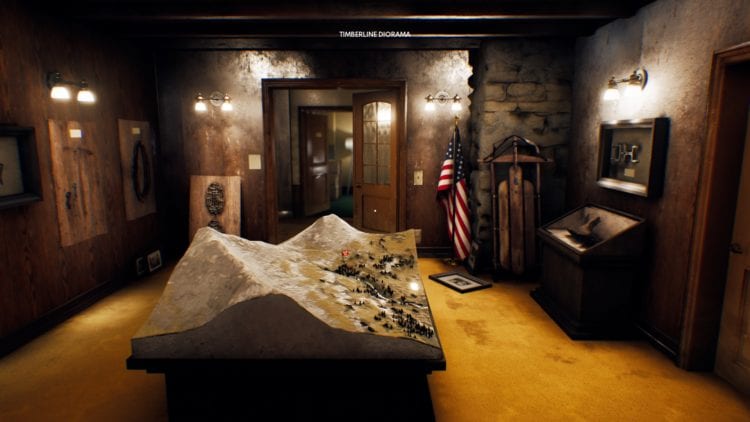 I like this room because it’s got a diorama of the hotel in it. Isn’t that fun? You don’t think that’s fun? FINE.

What follows is an interesting, if sometimes perfunctory, mystery thriller with a solid hook and a plot that did a great job of holding my attention for the entirety of the game’s brief 3.5-hour runtime. Some of the plot points are fairly easy to guess early on and the ending wasn’t everything I’d hoped for, but The Suicide of Rachel Foster is still compelling as a purely narrative experience. You can even choose many of Nicole’s responses to Irving, often to humorous results.

Aside from the story and characters, the most obvious star of the game is the Timberline Hotel itself. It’s rendered in its entirety and always you too walk around most of its areas. It can take a bit of time to get a feel for the building. But it isn’t expansive enough for you to have much trouble with navigation. I will say, though, that it seems a bit small. It has only two floors and enough capacity for seemingly just a few dozen people, which is weird considering how remote the place is and how extensive some of its facilities are.

The hotel is well-designed, though, with a large amount of character and a nice sense of place about it. You can’t enter most of the hotel rooms themselves, as they’re locked, but there isn’t much of a reason to explore outside of mere curiosity anyway. The hotel is full of hidden doors you can find that create shortcuts between different sections and these were fun to spot. 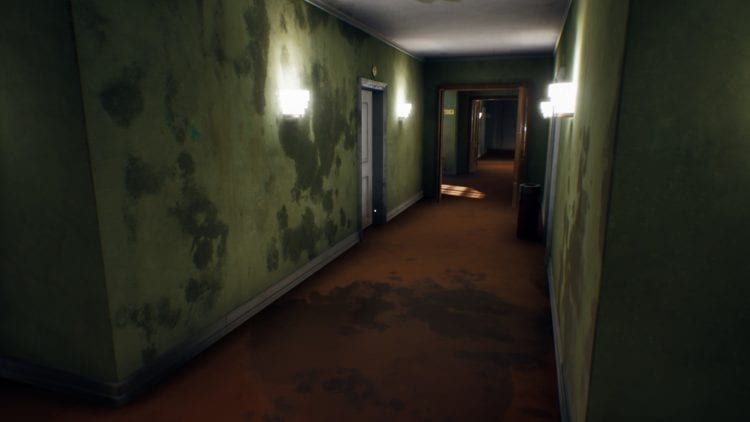 Creepy hallway? Check. Old, dilapidated wallpaper? Check. How are you going to be paying for this digital download? Check. Wait. No. Not that.

The Suicide of Rachel Foster is a first-person adventure, or, walking simulator, if you care for the term. So don’t expect much in the way of complex gameplay here. There are no puzzles or sequences requiring quick reflexes or aiming. You merely walk from one part of the hotel to the other in order to accomplish a task or trigger an event. There are a few items you find, though. Two of these you use only a single time each, while the other is a dynamo flashlight that often comes in rather handy.

There are also various items, such as cans and books, scattered around the environment that can be examined and rotated. However, there is rarely any reason to do so, however, as you’ll find many of the same items in various locations and they practically never contain any useful pieces of information. There isn’t much else to say about the gameplay. You control Nicole in first-person and she moves at a decent enough clip that walking around never becomes too much of a chore.

There are some instances in The Suicide of Rachel Foster that do seem intent on wasting your time to pad the length of the game out, though. For instance, at one point in the game, you start a sequence out in the hotel’s chapel. Your goal here is simply to walk from there to the other end of the hotel back to your room. As soon as you return to your room, you are then promptly told to go straight back to the chapel. My response was, “heh?” Thankfully, these are more an exception than a rule. 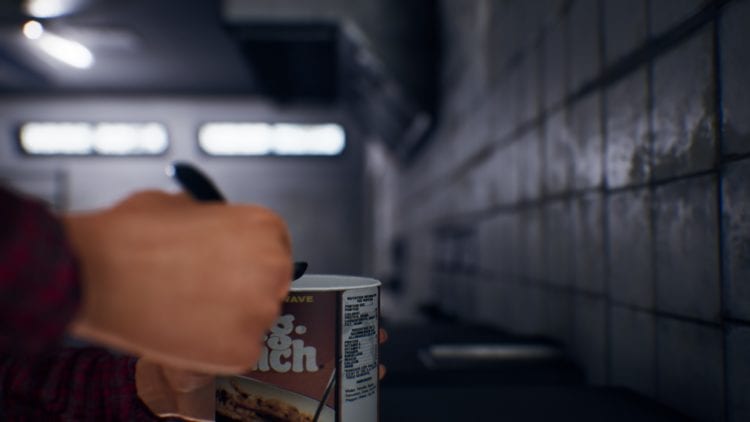 Sometimes the camera zooms in reaaaaaaaaaaaaal close when Nicole does a thing. Like when she gets her some nutritious beans.

It’s worth mentioning that, even though the game is predicated on lasting a certain amount of days, there are absolutely no survival mechanics or daily ritual acts that you’ll need to perform. The closest it gets is the first time Nicole locates a can of beans. Otherwise, the days just seem to start and end at random. It’s more of the snapshots of Nicole’s time at the Timberline as opposed to you directly participating in the entirety of her time there.

While this is obviously preferable from a narrative perspective, the hotel is so well put together that it’s a shame that the game doesn’t try to make more use of the space. There are very unique rooms that many may only give a passing glance at as they walk through, which is unfortunate considering the time and energy that creating such a believable location obviously required.

Visually, The Suicide of Rachel Foster is as good-looking as it needs to be. It isn’t exactly built of the most high-resolution textures I’ve ever seen but the hotel looks good from a technical standpoint. The game also runs very well. In my time with it, I saw no frame drops, strange hitches, but I did get a crash which resulted in very little lost progress, so everything appears mostly competent under the hood.

I will say, though, that some might take issue with the way the game handles some of its narrative themes. I can’t go into most of these without spoilers, but some of the ways it treats heavy issues feel like they miss the mark. But that depends on how hard you want to think about the story and how bothered you are by some of its implications. 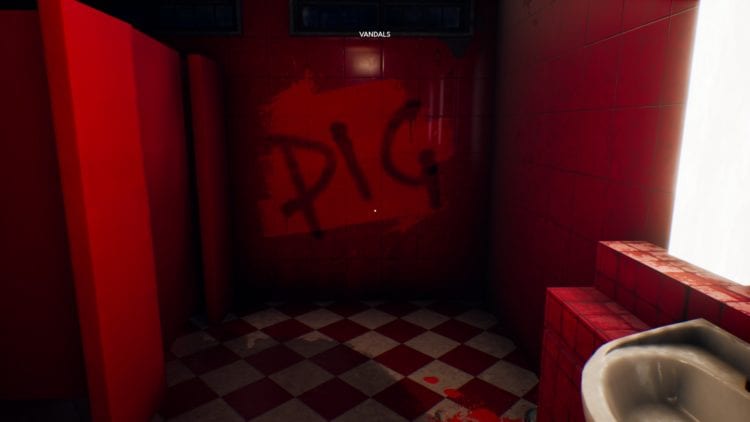 Hey, pig. Yeah, you. Hey piggy-piggy-pig pig-pig. All of my fears came true.

This game won’t be as divisive as the seemingly-similar Gone Home, but it’s also a very different experience that simply shares its genre more than anything else. Anyone who likes walking simulators or solid mysteries will likely be satisfied with The Suicide of Rachel Foster. It’s got a well-written story and is set in a convincing location. It’s also very easy to blow through in a single evening in lieu of watching a similar movie.

The Suicide of Rachel Foster

Anyone who likes walking simulators or solid mysteries will likely be satisfied with The Suicide of Rachel Foster. It's got a well-written story and is set in a convincing location. It's also very easy to blow through in a single evening in lieu of watching a similar movie.

By Logan Broadley20 hours ago
Reviews