The Survivalists is an adventure sandbox offering from Team 17, the makers of The Escapists games. You can expect a bit of lighthearted humor and cartoony design, mixed with Minecraft mechanics (crafting and building) and a bit of Don’t Starve (survival on a deserted island).

While enjoyable in short bursts, The Survivalists did present several issues and problems that made the experience quite tedious from time to time.

The moment you start your playthrough in The Survivalists, you’ll find yourself on the aforementioned deserted island. You’ll begin by parsing through various tutorial tooltips and then crafting your first item, a hand ax made out of pebbles you’ve obtained on the beach.

From here, you’re told about the game’s mechanics and how you can prolong your, well, survival, as you live off the land. It’s not particularly tough, not even close to punishing. In fact, dying merely respawns you back at your last save point (which comes in the form of any bed you’ve made and slept in). You can freely return to your last known location to pick up any items you may have dropped. Speaking of items, this will be one of the main draws of The Survivalists: its crafting mechanics. As mentioned, your trusty hand ax is made from pebbles. While you chop down trees and shrubs, you’ll gain raw materials such as long grass, petals, and wood. In turn, you’ll use these to create more advanced weapons such as clubs, spears, and so on.

There’s also a “Blueprint Mode,” which lets you place pieces of furniture and fixtures on any location that you deem appropriate. Apart from the bed/save point, you’ve got your straw walls, wooden walls, fireplaces, awnings, and more. You could even hang some decorative items like shields, scrolls, and tools on your humble abode’s walls. Of course, you’ve got food recipes too, just to keep your character healthy. All in all, I found this feature quite enticing. Unfortunately, a big issue rears its ugly head early in The Survivalists’ campaign. It comes in the form of your monkey companions. Yes, as you explore the deserted island, you’ll encounter several monkeys that can be befriended (oftentimes, you need to throw monkey food at them to make them a permanent follower). Now, that sounds all well and good until you realize that the AI is completely borked — even if we’re talking about a video game, it does seem like you’re a zoologist who’s trying to train these wily critters.

The way this works is that monkeys, by default, follow you around. However, you could also choose to “train” them (signified by a banana icon). The first action you take is “saved” in their memory, and they’ll try to commit the same action — monkey see, monkey do, as they say.

The problem is the micromanagement of these actions and how monkeys start running all over the place. For instance, if you train them to chop down shrubbery or trees (and give them a weapon), they’ll run off to distant directions. They won’t gather the stuff that drops, and your only clue is the “swath of devastation” they’ve left behind, like clumps of materials strewn over grassy fields. Furthermore, the tasks they’re trained to do get overwritten the moment you assign them to work on something else. Picking up from where they left off is never automatic, and reallocation gets really tedious. It gets even worse when we talk about combat in The Survivalists. Your weapons (ie axes, spears, swords, bows) are the ones used to attack enemies like orcs, bats, or skeletons. There is, however, another equipped item called a multitool that’s used for crafting. You can’t equip weapons when you have a multitool, and vice versa, which means you can only choose to have one highlighted at any given time. Now, imagine if this was also applied to your monkey companions and you’ll realize how clunky it is. Oftentimes, I found myself gathering all these chimps and checking to see which ones are using axes and which ones are using multitools. If you click on the wrong one (and they tend to cluster together too), you’ll have to micromanage to see which chimp is using which item.

In a practical application, giving them commands in real-time also causes issues. For example, let’s say you have four monkeys trained to fight mobs and they all have weapons. They sometimes avoid attacking unless you highlight all of them and click the “train” command. They don’t even care if enemies are pouncing on them already because they’re still awaiting your input. Oh, and if you make a mistake and hit a tree trunk instead of an enemy — believe me, it happens — then, good luck. Those monkeys will run off and rip down the flora instead of battling the fauna. Worse, they don’t even grab any tools or weapons you’ve left on the ground. They’ll just scurry around hoping you’d do something.

Additionally, I had issues with the usage of controls. The mouse’s left-click didn’t work when attempting to use items like food, so I had to switch to a gamepad. Unfortunately, using a gamepad made controlling the monkey companions a lot more cumbersome too. The mouse lets you click and drag to issue a command whereas the gamepad requires you to hold a button for several seconds before that command is accepted. To be fair, The Survivalists does have a few key facets that feel very rewarding. Exploration is one of those. It’s a treat to encounter the Mysterious Stranger, an NPC who serves as a vendor. He also happens to sell you treasure maps and (very expensive) labyrinth keys to help you get off the island.

Speaking of labyrinths and treasures, there are loads of these that you’ll discover throughout The Survivalists‘ campaign. Likewise, you’ll find vaults, mini-dungeons, or ruins that could have awesome loot for you to find. There are even legendary-type weapons that you can craft if you have the right high-end materials. Then, there’s the spyglass. This unique item lets you view locations in the distance, and you might even discover new islands. Yep, that’s right, you could go ahead and build a raft, then sail off into the unknown.

Exploration is a breath of fresh air in The Survivalists. I feel that this gameplay loop is what will keep most players engaged as they complete the story. The tribe has spoken

People have a saying whenever you’re off on an adventure: “It’s not the destination, it’s the journey.” Although the end goal is to finish The Survivalists‘ campaign and escape the island, the journey itself is enhanced with lots of quirky and endearing concepts. As mentioned, crafting is a treat. Meanwhile, discovering new locales and secrets leads to awesome instances.

Unfortunately, part of that journey encompasses unbelievably clunky and poorly designed follower mechanics. There’s a lot of monkeying around that will annoy and pester you as you continue to progress. I found that the key to success was to simply have a couple of monkey companions carrying chests. The others, meanwhile, have weapons equipped, ready to take down hostiles that we encounter. Naturally, some of them would run off or get confused, which then leads to moments of exasperation. I genuinely feel that this mechanic needs extra tweaking to make it more user-friendly.

If ever you plan on picking up The Survivalists, which releases tomorrow, October 9, be prepared to tackle these issues. At the very least, the game does have an online co-op feature, so you and other peeps can buddy up and explore. Sadly, I wasn’t able to try the co-op feature during the course of this review. Hopefully, that presents you with more enjoyment instead of the single-player mode’s monkey business. 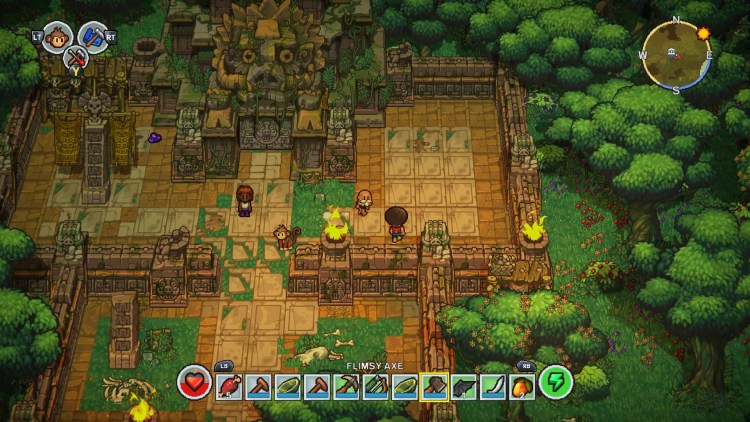 A sandbox-style game where you need to craft, build, and eventually escape a deserted island.
7

Interesting and charming in its own way, The Survivalists will keep you entertained in short bursts as you try to complete the main objective and craft items to stay alive. Unfortunately, the AI system of your monkey companions is quite cumbersome and clunky. You'll often find yourself more annoyed than delighted due to all the monkeying around.

By Dani Maddox4 days ago
Reviews