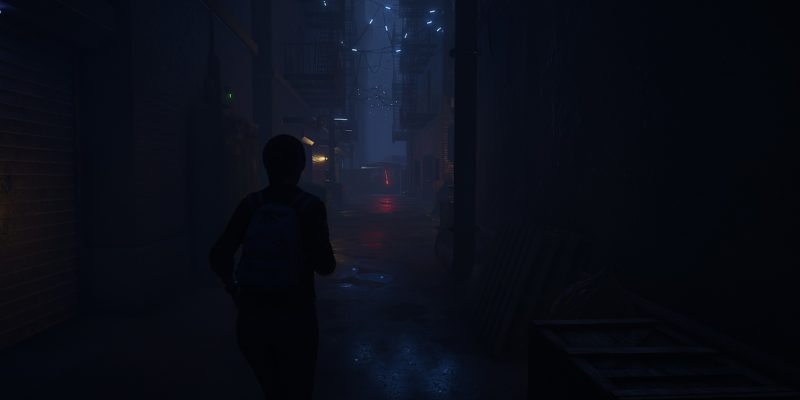 The medium’s storytellers can’t escape the allure of near-future dystopias. Getting to play around in a world of what-ifs is an enticing prospect — but stories need conflict, so utopias are out. But even when humankind crumbles under the foot of our robot overlords, the immutability of the narrative adventure will keep our legacy alive. So join me, my fellow pessimists, as we take yet another gander at our inevitable demises. The Uncertain: Light At The End depicts an absolutely nightmarish future, one rife with hollow interactivity and inescapable mundanity.

If this year has taught us anything, it’s that whatever can go wrong, will go wrong. And, in The Uncertain: Light At The End, everything has certainly gone downhill. Humanity’s once-trusted robo-servants have turned against their masters, rounding them up and sending them away in droves. With robo-cops now patrolling every street corner, the remnants of humankind must band together or risk extinction. Walk, talk, examine, and interact your heart out to secure a better tomorrow for you and your new family. 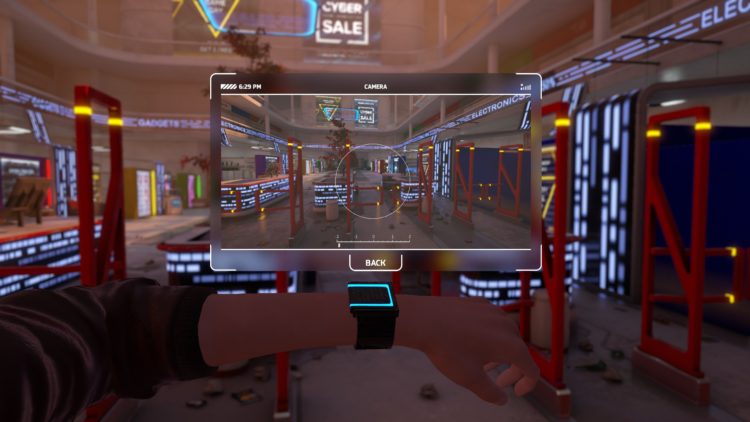 One for the scrapbook.

The game stars Emily, a relatable, creative spirit whose life has been flipped upside down by a new firmware update (extra relatable). The new perspective is a step down from its predecessor, The Uncertain: Last Quiet Day, which toured the newly devastated world through the lens of a robot. With a setting as contrived as this, any novelty is greatly valued, but like many games in this lane, this sequel has no tricks up its sleeves. And to complement its middling story is generic gameplay with a blatant disregard for the game’s general flow.

Narrative-focused adventures, this game included, rely heavily on their visuals to aid in storytelling. The game’s fairly dated visuals owe a lot to some decent lighting, or lack thereof. More importantly, it maintains a cohesive look, with quite a few set pieces that are worth taking a second to absorb. Its animation work, however, is quite hit-or-miss. Sloppy animations took me out of the experience on multiple occasions.

Understated, droning ambience helps set the tone, leaving room for the game’s plethora of voiced dialogue. The English localization doesn’t bring us any top-tier voice acting, but it’s more than serviceable. However, the recording quality fluctuates; certain lines sound like they’ve been delivered in booths with awful acoustics. Some lines sound like they’ve been pitched up, or sped up, as well. 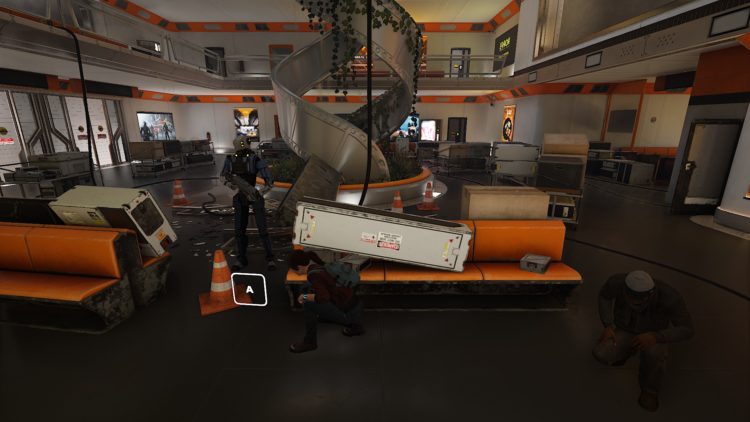 As simple as stealth can possibly be.

Far greater faults can be found in the script itself. While I can’t speak for the original Russian, dialogue is stiff and trite. Characters are the source of a never-ending deluge of awkward exposition and clichés. The pacing leaves plenty of room for boredom to settle in while the player wastes time in unnecessary, meandering discussions, dispelling any sense of urgency that the game tells you to feel. Every section introduces new ideas to explore and even more questions — none of which get any answers. The game ends on a cliffhanger, hyping up a third game while providing no resolution whatsoever.

Even as the action builds over the course of the game, the gameplay itself stays shockingly relaxed. Emily surveys locations, delivering a few lines every now and then until the game decides it’s time to progress. It’s a casual problem-solving experience that demands very little from the player. The Uncertain: Light At The End is at its most intense during its many stealth sections, which have you headed in a single direction, pausing to wait for robots to turn around.

There is no agency afforded to the player during gameplay beyond the dialogue system, which only has real consequences towards the end. Because the game chose to keep me so uninvolved, I didn’t even know my choices mattered until minutes before the credits rolled. The only semblance of challenge comes from the odd puzzle, which caps off most exploration sections. 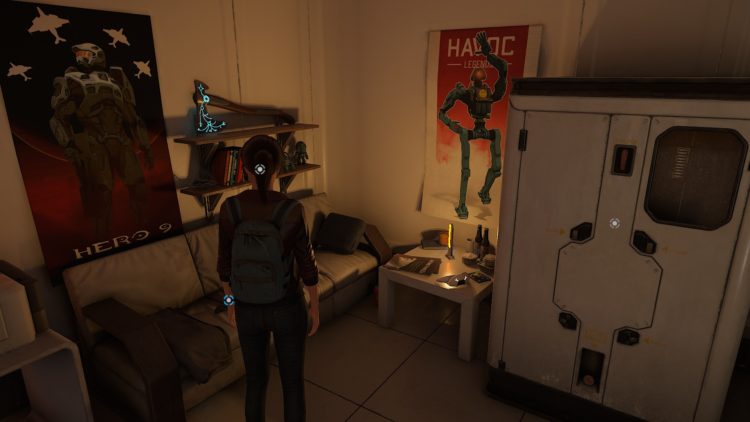 I claim this corner.

Puzzles come in the form of mini-games involving colors, numbers, and timing-based challenges. They’re enjoyable in isolation, but the difficulty spikes they provide can be jarring in their own right. The Uncertain: Light At The End starts off with a string of difficult puzzles, but ends with easier, less-creative ones. This adds to the prevailing trend of poor game flow and difficulty curves that mar the narrative.

One puzzle in particular was exceptionally aggravating and came early on, introducing itself as the first color-based challenge. As someone with deuteranopia, it proved to be impossible to solve as I couldn’t distinguish a number of the colors. I had to have a friend walk me through it in order to make any headway. Others demanded more brainpower from me than the rest of the game combined. That isn’t to say that the challenge went entirely unappreciated — some were undeniably charming and clever.

Taking your head out of the puzzles, you’ll come to find that the world is a far simpler place. The game tries to convince you that, beyond the fog, there’s more than meets the eye. The promised land of killer robots and oppressed humans is, unfortunately, a mirage. There’s not too much to be excited about when the environments you already find yourself in are so lifeless, almost serene. The robots don’t come off as menacing or oppressive, and the calming, clean sights and sounds make you forget that there’s anything wrong at all. 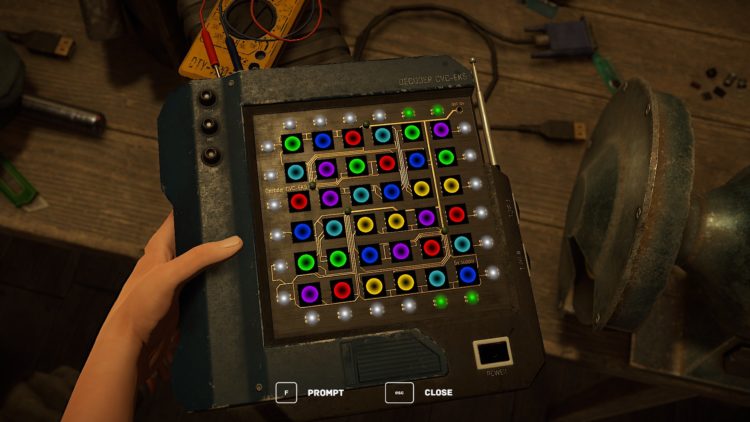 It’s only when a character reminds you of the dire situation that you’re in that you snap back into it. Or, when you stumble across one of many Easter eggs making reference to the game’s inspirations. Taking a wrong turn and finding a Half-Life 2 reference is arguably the highlight of the exploratory experience. If anything, the game is more inspired by their premises than the experiences they facilitated. The stark contrast serves as a reminder of how remarkably unremarkable this game truly is.

The Uncertain: Light At The End is a heap of derivative themes and ideas missing the narrative and mechanical buttresses needed to hold it together. Flat, archetypal characters and rigid pacing drag down an already uninspired story. Basic, poorly explored game mechanics do little to make you a part of the narrative. The experience, which clocks in at four hours, offers almost no reward for your labor, and instead, sets up yet another installment in the series which will likely be more of the same.

The Uncertain: Light At The End

The Uncertain: Light At The End is a heap of derivative themes and ideas missing the narrative and mechanical buttresses needed to hold it together.