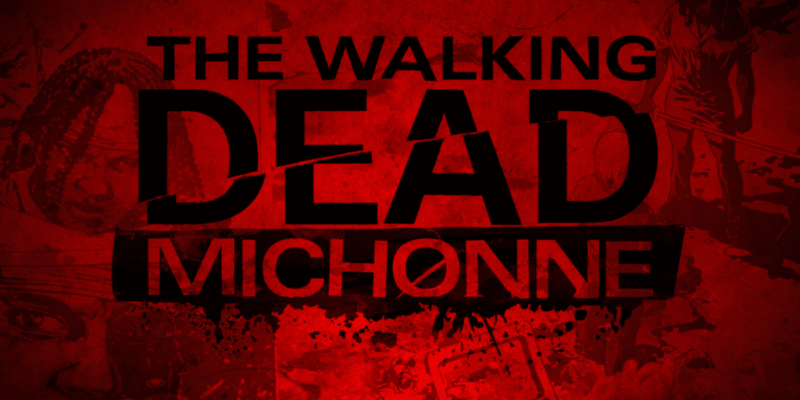 Like a survivor of the zombie apocalypse who just keeps volunteering for the dangerous supply runs, I seemingly can’t stay away from Telltale releases. The chance of finding an incredible stash (another Walking Dead Season One, or The Wolf Among Us) is too great to resist, even if the last couple I’ve played (Walking Dead Season Two, Game of Thrones) have been comparatively meagre pickings. Sean Vanaman’s (co-lead and writer on WDS1) departure from the company in 2013 could be a factor in this downward turn; though from what I’ve heard about Tales From the Borderlands, Telltale can still put together a great series.

Those are the hopes I brought to The Walking Dead: Michonne, a three episode mini-series that’ll fill in some blanks about what happened to the comic book version of the titular character during her hiatus away from Rick Grimes and crew. It’s a stand-alone game, requiring no previous ownership (or knowledge, really) of other Walking Dead releases. You arguably don’t need to know a whole lot about Michonne herself either, though having an interest in her backstory is obviously a benefit.

I’m not a reader of the Walking Dead graphic novels, and only a semi-regular viewer of the TV version. I got by just fine in this game knowing Michonne (voiced in this incarnation by Orange is the New Black’s Samira Wiley) as the stoic lady with the machete skills. 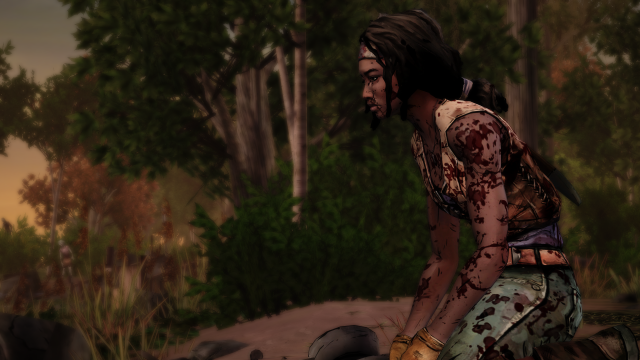 Michonne engages in a bit of Dragon Age cosplay.

That taciturn nature is in part born of trauma, and Michonne (as would be the case for almost everybody who’d lived through a zombie outbreak), is exhibiting severe anxiety. In gameplay this manifests as restless sleep, suicidal thoughts, panic attacks, and, at its most extreme, hallucinations. Media obviously has to take shortcuts when depicting this sort of thing, and, taking that into account, The Walking Dead: Michonne does a pretty decent job making our heroine feel in trouble without being a mental health caricature.

She slips very well into the tightly-wound Telltale protagonist role, where the dialogue options are so often Silence, Dismissive Comment, [Fight], or Fuck Off. Season Two did some clever things with Clementine as the playable lead, but ultimately had to stretch the boundaries of credibility in forcing a young child to do the bulk of the thinking and physical activities. Here, the actions and spoken options rarely feel out of place.

That’s particularly true of the now traditional Telltale quick-time-event combat scenes, where Michonne can naturally handle herself very well indeed against all but the most overwhelming zombie odds. These scenes feel more clinical and skilled than the more desperate affairs that have turned up in prior Walking Dead games. In fact, they’re given some specific cinematic framing by black ‘aspect-ratio’ bars which show up at the top and bottom of the screen whenever a fight kicks off. 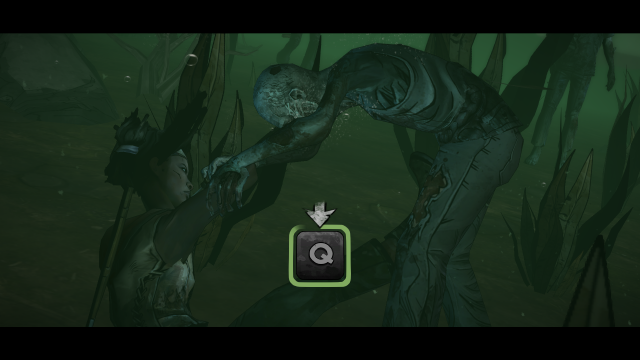 Press Q to underwater tango with the undead.

That increased emphasis on presentation is clear from the introduction. After a cold open, In Too Deep (as this first episode is named) gets a proper, distinct set of animated slideshow credits, complete with intro song. The Wolf Among Us took a similar approach, and it’s once again effective as a method of book-ending an episodic release.

Unfortunately, Telltale’s desire to keep the combat choreography going sometimes takes precedence to actual interaction. Somehow, pressing F12 to take a screenshot counted as successfully pressing ‘Q’ during one particular fight. The developer has previous history with not even making players press the correct commands (go back to The Wolf Among Us Episode 5 and marvel at being able to defeat Bloody Mary by barely pressing a button), and the inconsistency continues to disappoint. Sometimes you will indeed die if you don’t respond to an input fast enough, but other times the game will just carry on regardless or let you get away with pushing something.

Where Michonne does a little better than recent Telltale releases (at least during the first half of this episode) is allowing players time to walk around and explore certain scenes. It’s not taking the genre back to even the occasional puzzle-solving of The Walking Dead: Season One, but nor is it just shunting players between cut-scenes. In fact, small events that would’ve just been automated in prior games are actually used as a fairly effective means of upping tension. Pushing ‘down’ to reach your hand through a door to unsnap a lock isn’t exactly an innovative piece of interactivity, but it is using simple videogame mechanics to add a level of player presence that wouldn’t be there in a cut-scene. 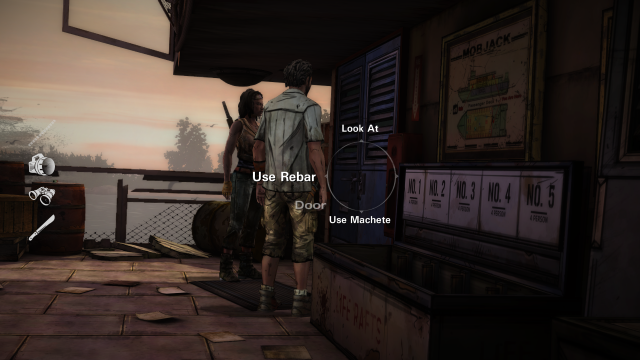 That door scene takes place during the episode’s stronger opening half, during which Michonne hooks up with optimistic boat captain Pete (plus more surly crew) and ends up looking for some of his friends in an abandoned, moored ferry. There’s a sense of mystery to combing through the aftermath of whatever happened aboard that vessel, and the general unease is played up to convincing effect. It’s not exactly novel to be hunting through wreckage while under pressure from external zombie hordes, but the desire to figure out the history of the ship drives the linear exploration in a positive way.

To my immense disappoint (and this really isn’t much of a spoiler), Michonne’s opening forty minutes or so are just preamble for another authoritarian compound run by menacing sadists. You know, like the one in Walking Dead: Season One (episodes 4-5), or Walking Dead: Season Two (episode 3), or the third season of The Walking Dead TV series with the Governor. This is all incredibly familiar, well-worn zombie fiction territory, which would require something exceptional to make it stand out from the rest. The group in Michonne are led by a scheming matriarch, which is at least a minor twist on the usual set-up; but her violent brother is (at least on the evidence of this episode) a thoroughly unremarkable villain.

At one point a character voices the concern that “m-maybe the humans are the more serious threat and not the walkers,” as if that’s a line which needs to still be spelled out in zombie media in 2016. It’s a theme which just about bears further examination, but the script fails to deliver any spectacular insights to set it apart from every other work of “man is the true monster” out there. For those hoping to complete the Walking Dead bingo card, the episode also features a scene in which a recently turned speaking companion (“they’re not human any more …”) has to be brutally mercy-killed. 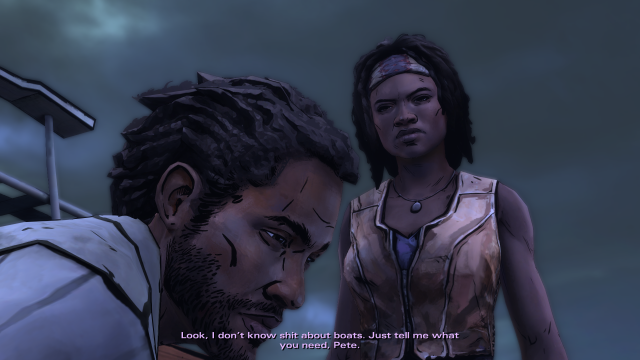 Get us out of this plot-line Pete … whatever it takes.

I had few expectations for The Walking Dead: Michonne, but this first episode initially hooked my interest with its effective treatment of character, slight increases in the freedom of interaction, and smart stylisation. Sadly, when it wraps up its abandoned ferry mystery and becomes a laboured retread of yet another capture at the hands of yet another compound of dictatorial scavengers, In Too Deep takes a turn for the rotten. I like Michonne’s character, and some of the stylistic changes introduced by this series, but I’m now dearly hoping Episode 2 will dispense with the current, staid plot as quickly as possible and embrace one of the many unexplored narrative furrows this universe potentially has to offer. 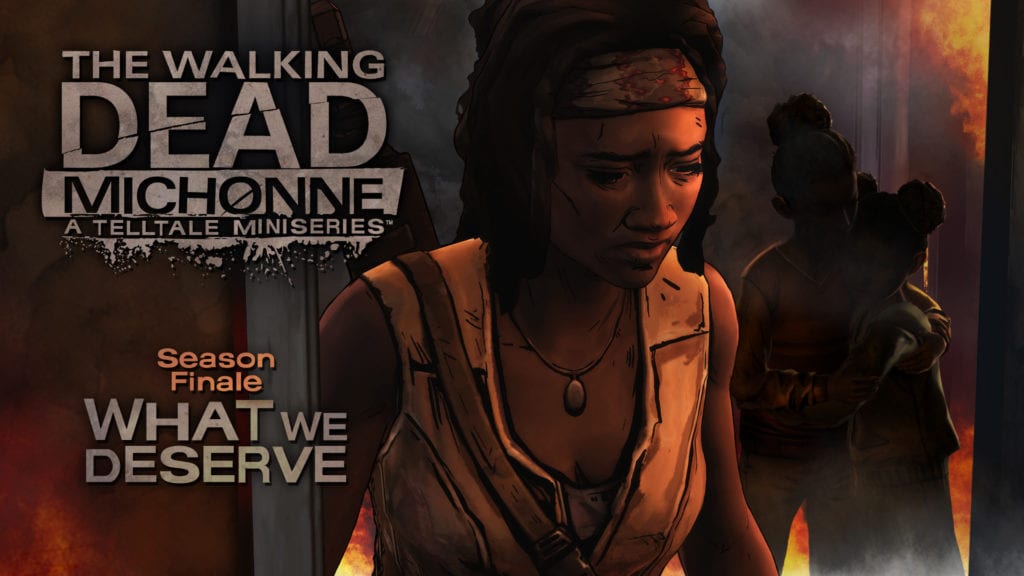 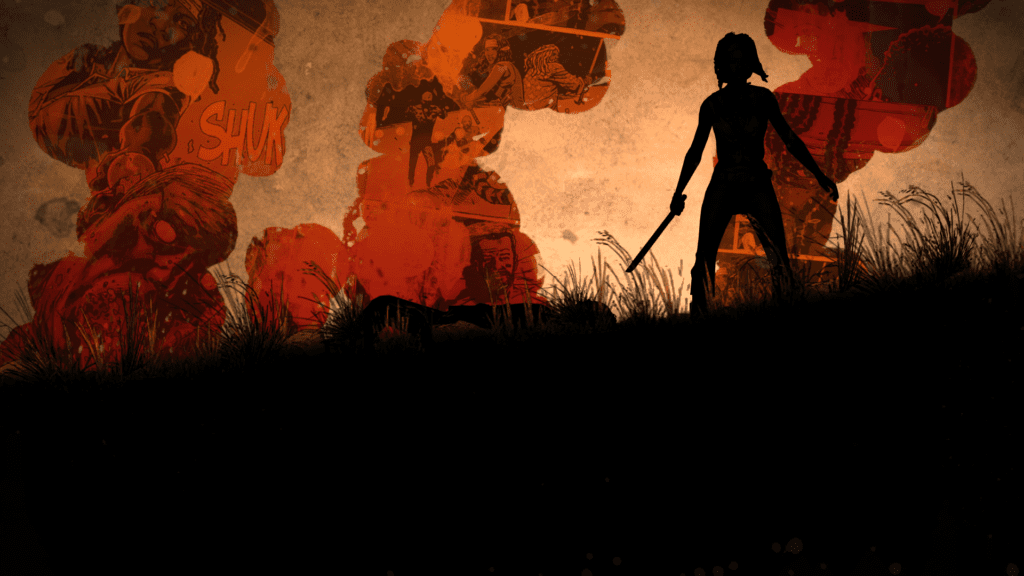 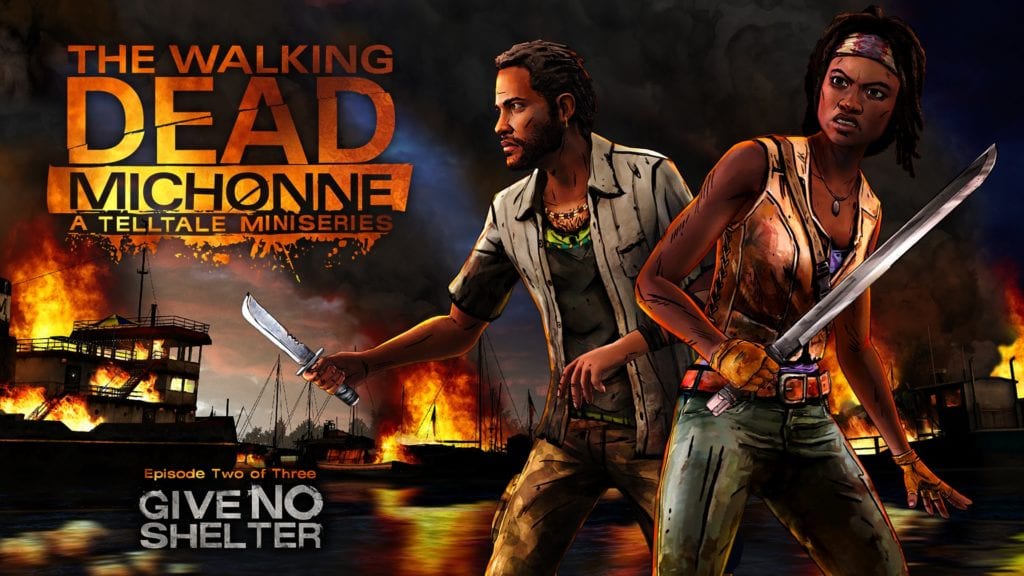 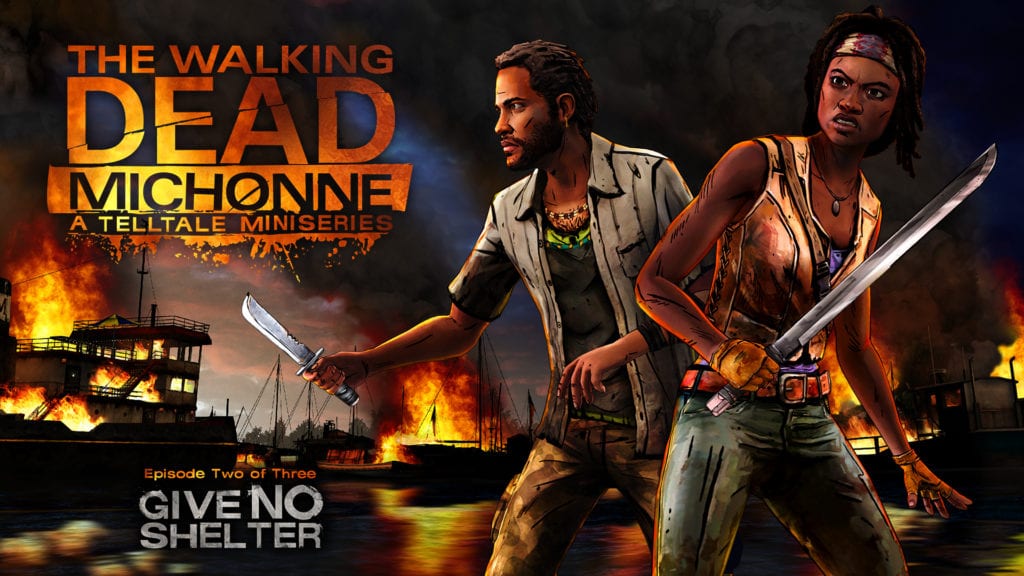 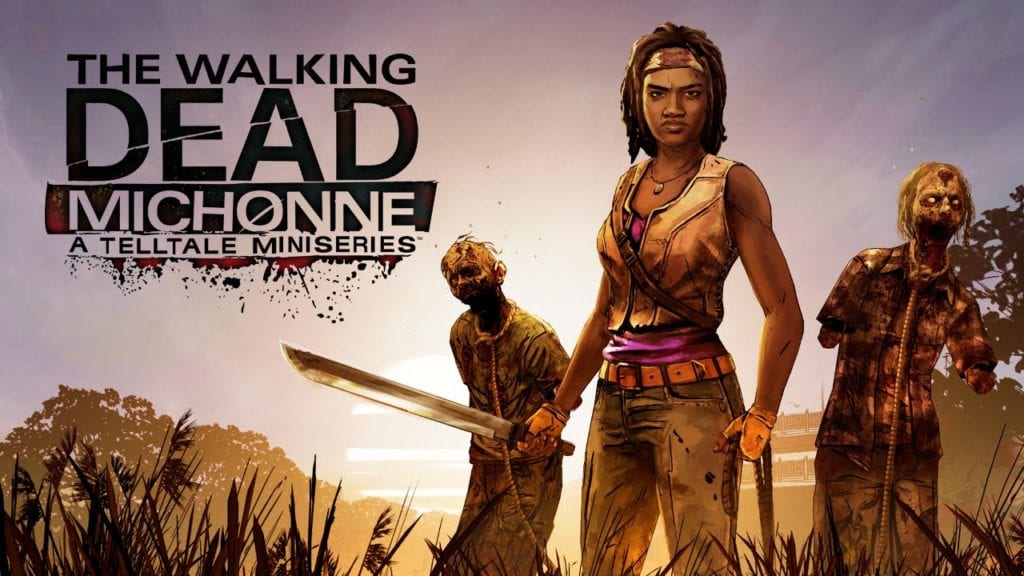 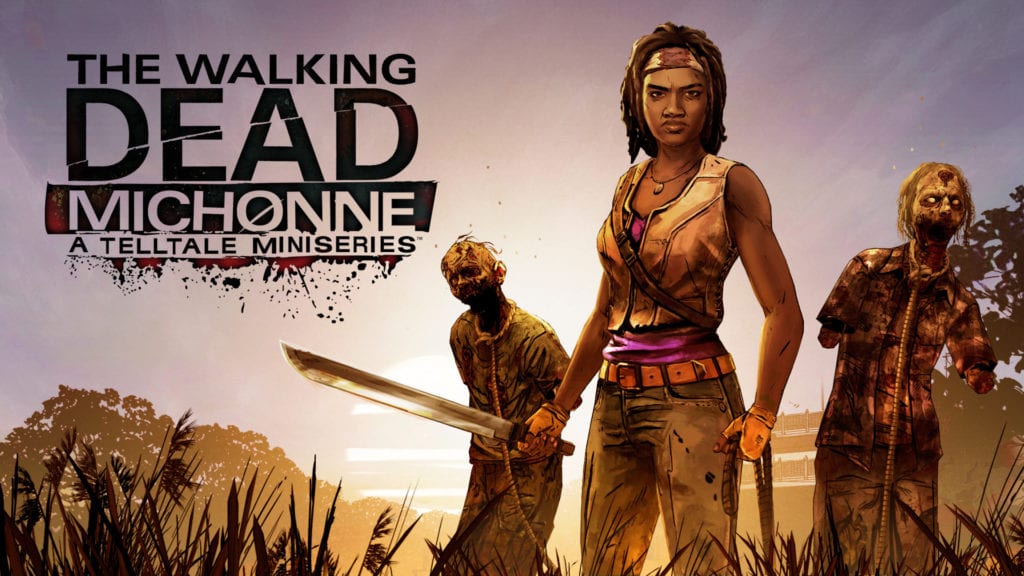 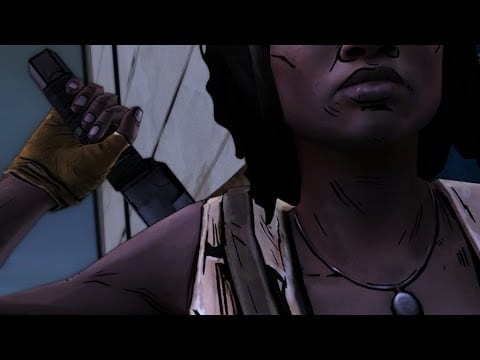 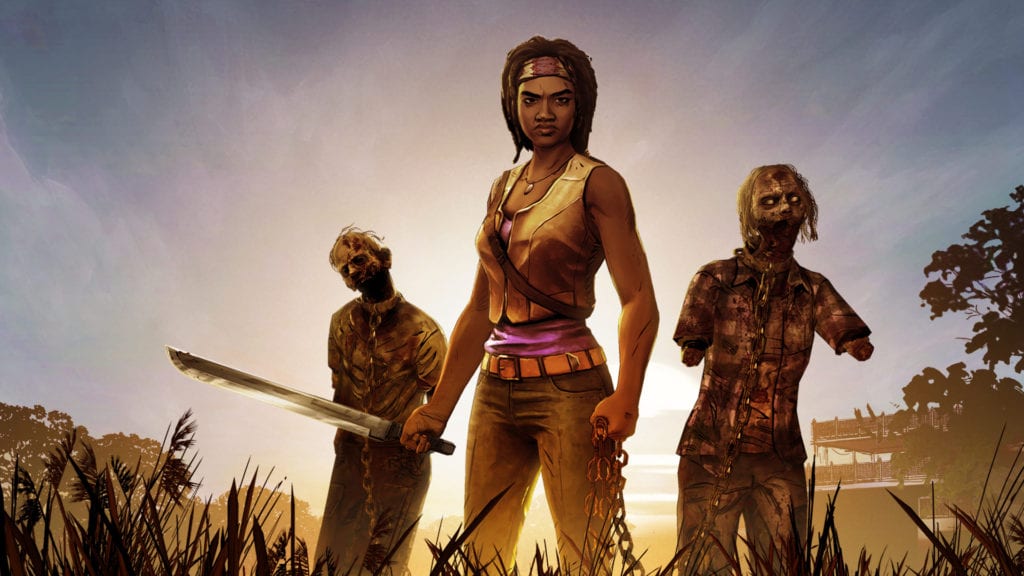