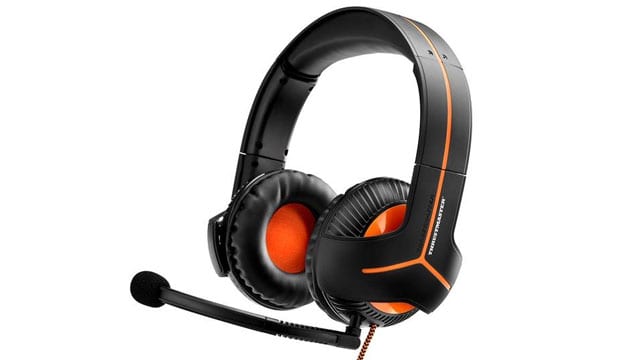 This new headset is not bad looking, but the build quality doesn’t feel fantastic for a mid-range set of headphones. The top band is a hard plastic which can be adjusted by sliding them around a metal support on the inside. They are solid enough but also quite rigid which, in my experience, can make them vulnerable to snapping at some point in the future. 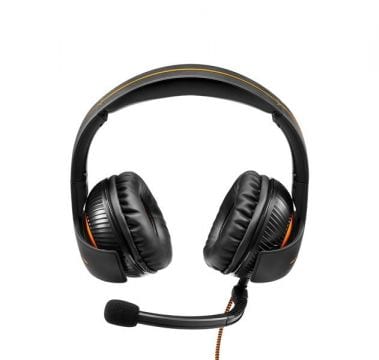 The headphone cups are probably a little undersized for anyone with large ears, which can make them a little uncomfortable. Especially if you have them on for more than an hour. The headphone cups can be swivelled very slightly, which does alleviate pressure on the main band when they are put on or removed. But, again, this part of the headphones feels quite rigid.

When Thrustmaster say “Powered” what they mean is that a small box between your PC and the actual headphones requires power to make use of the headset features. Unlike other gaming headsets which simply plug in to a USB port, this set does something a little strange. The headphones plug into the box which is then plugged into the standard mic and audio ports on the PC. It does not plug into the USB for audio connectivity. There is a USB connecti0n, but that’s used to charge up the box. Or, as Thrustmaster like to call it, the ‘Sound Commander’. Such gravitas! 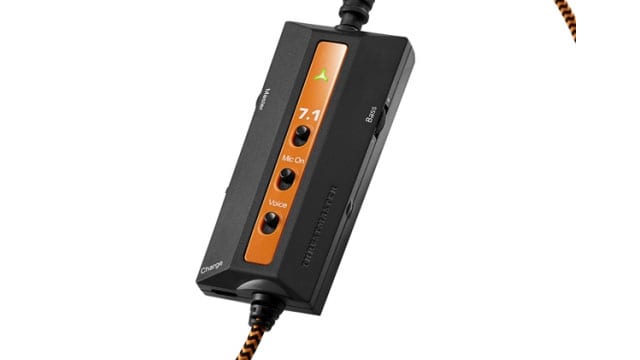 The Sound Commander is where the magic is supposed to happen as it controls switches for the mic, activation of 7.1 surround sound, and, most importantly, the bass output. Thrustmaster is keen to point out that one of the main features of the 350 CXP 7.1 Powered Headset is the ability to really push up the bass. On the side of the Sound Commander there is bass control which when whacked up to the top does indeed produce some really deep rumbly bass. However, there is a problem with that. The more you pump up the bass, the more subtle sounds get lost and so you end up having to dial it back. With the 7.1 setting turned on and the bass lowered, the audio quality is not exactly stellar. With the 7.1 switch turned off, well, the audio quality is quite poor.

A detachable microphone is included but Thrustmaster have gone with it only being flexible at the point where the mic joins the headset. This gives the microphone arm less flexibility, but there is just enough to pull it away from the face if required. 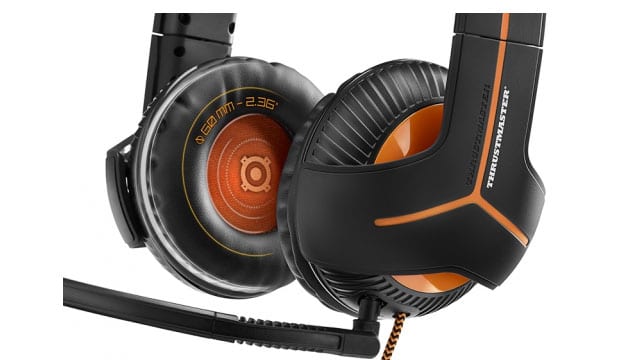 The whole setup is trying to cater for everyone, and for PC users that’s not ideal. If you have audio and USB ports on the front of your PC then it’s a little easier but if not it could be a right pain.

In summary, for a mid-range headset it has some quirks. And, despite the addition of the Sound Commander, the audio quality is quite average. The fact that it can’t be plugged into a USB socket for audio output will probably be a deal-breaker for most PC gamers. This is really a headset that’s trying to cover all console platforms rather than catering for the PC market, which is its downfall from a PC user’s perspective.

If you own both a console and a PC then there might be a reason to buy it. Otherwise, the Thrustmaster 350 CPX 7.1 Powered Headset is average at best. There are better headsets on the market at a lower price than the £89.99 MSRP for these.

By Cameron Woolsey16 hours ago
Features