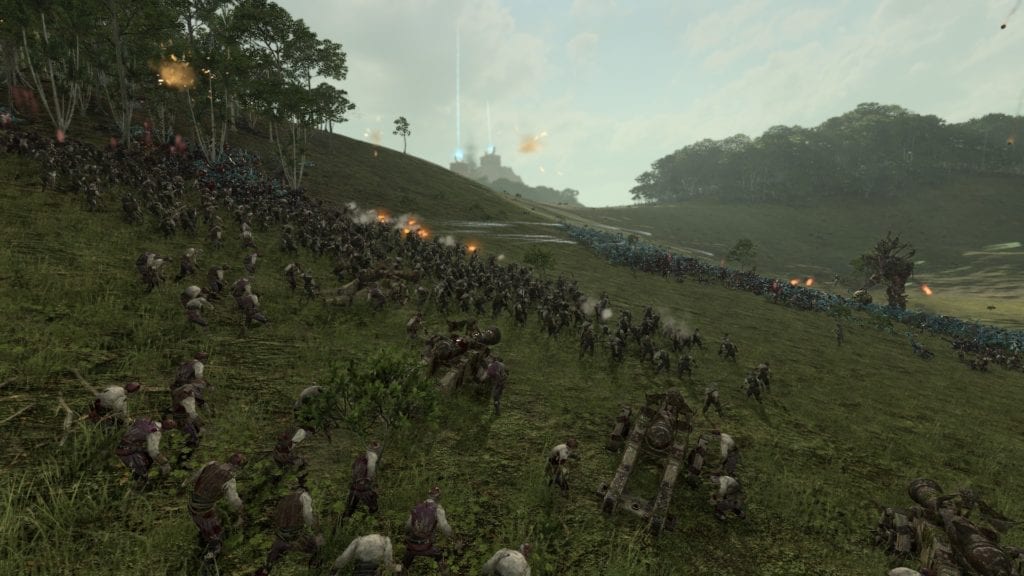 The Warhammer Fantasy Battles world has been known for some over-the-top and zany characters as well as brutal battles. That’s become more exemplified in Total War: Warhammer II with factions that have become more unique than their counterparts in the previous game. We get to see that uniqueness first-hand with the Curse of the Vampire Coast DLC. It feels as though this is what each Total War: Warhammer faction or Legendary Lord is meant to be. It just might be the pinnacle of Creative Assembly’s crafting prowess. 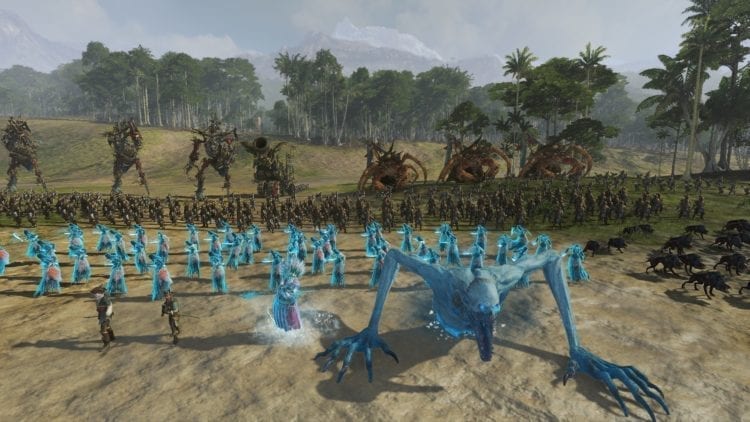 Sailing Into The Unknown in Total War: Warhammer II – Curse of the Vampire Coast

Your choice of Legendary Lord, which we’ve covered in detail in the past, will lead you to new discoveries. Will you burn the jungles of Lustria as the mad Luthor Harkon? Or will you plunder Ulthuan and the deserts of Nehekhara as Aranessa Saltspite? How about Count Noctilus or Cylostra Direfin?

No matter your choice, you’ll always keep moving around and exploring. That’s because the main goal of the game is to find fragments of Sea Shanties and claim the Star-Metal Harpoon. Too much exposition? Well, that’s a given. The Curse of the Vampire Coast DLC feels more like an exploration-heavy RPG or adventure game wearing the trappings of an RTS.

You could be searching ruins far north in Naggaroth, the Land of Chill. Likewise, you could be taking out rival pirates off the coast of the Southlands. Unlike the default Vortex campaign (which your pirate lords aren’t concerned about), heading around the map doesn’t feel too tacked on. You are a pirate, after all. And, like any pirate, you’re bound to encounter a lot of humor along the way (such as pirate lord and hero names). 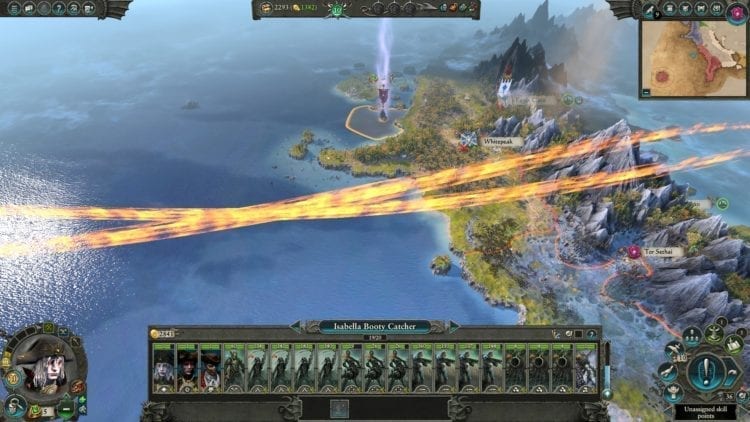 Yo Ho Ho And A Bottle Of Rum

As you make your headway into new lands, you can set up Pirate Coves in coastal towns to help boost your research, income, and Infamy gain. Raising your Infamy — via Pirate Cove improvements, events, battles, and the like — is necessary to put you at the top of the pirate food chain and eventually unlock the final battle.

Another mechanic you need to watch out for is Loyalty. Your lieutenants are treacherous and would mutiny if they’re idle. They need to keep fighting (based on the types of battles they’d like to initiate) or you can hand out post-battle loot to keep them satisfied. This is, perhaps, the first true challenge you’ll have in Curse of the Vampire Coast. You have to know when to send out your Vampire Admirals and when to keep them close should the need arise.

Another risk you need to look out for are the rogue pirates. They roam the high seas, keeping Pieces of Eight that reward you with Regiments of Renown — elite versions of certain units. They’re dangerous in open water and completely neutered when you’re on land. That’s because they don’t even attack your settlements. 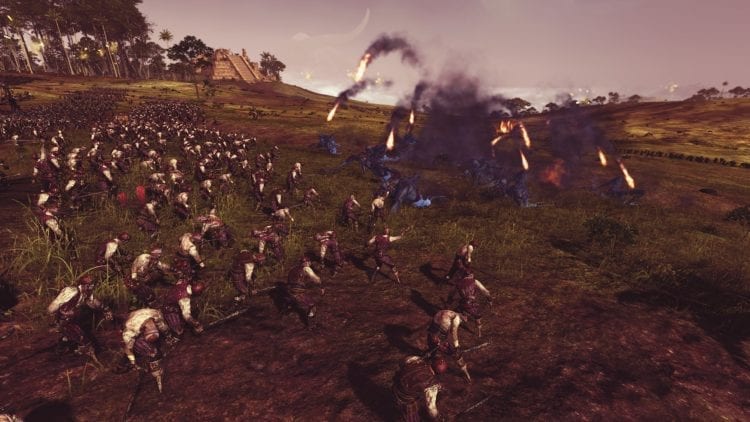 In order to succeed in the campaign, you’ll have to build up your forces. You can opt to start growing your settlements or, alternatively, improve your Legendary Lord’s capital ship. Your Legendary Lords act as a “horde faction” as well meaning they have their own buildings and can recruit locally if you’ve got the upgrades. Think of it similar to the Warriors of Chaos or Beastmen factions. Since the Vampire Coast can build Pirate Coves and manage settlements, you’ve got the best of both worlds.

This makes for a more aggressive style of gameplay. If your Legendary Lord has been beefed up with the right buildings, skills, and tech, you can churn out some powerful units right at your enemies’ doorsteps.

Speaking of units, you’ve got your zombie pirates, zombie handgunners, zombies firing cannons, zombies on fell bats, zombies on giant crabs, and much more. As for playstyle, think of it as something akin to Napoleon: Total War. Your cannon fodder zombies act as your line infantry while the rest of your artillery and long-range gunners create a firing line. The unit designs are impeccably sublime from the undead pirates hanging on Necrofex Colossi and Rotting Prometheans, to the eerie Syreens and Mournguls. My favorite has to be the Bloated Corpse which just beelines straight for enemy units before exploding in a gaseous death. The roster is so zany and refreshingly over-the-top that the source material might surprise you. 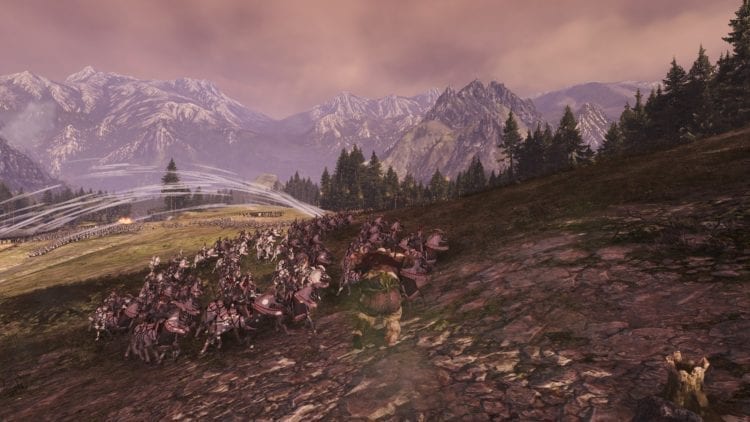 Nothing like blowing up precious thoroughbred stallions with a gassy tub of lard.

That source material happens to be one issue of Games Workshop’s White Dwarf magazine. That’s it — one solitary magazine issue (released over a decade ago, mind you) that detailed the Vampire Coast supplemental army led to a fully fleshed-out Total War faction. Who knew this would’ve been possible? Remember, the Vampire Coast isn’t one of the core factions in Warhammer Fantasy Battles. Seeing them here is a treat for long-time fans.

Developers Creative Assembly is earning their moniker given the above as well as the inclusion of various nods to Dreadfleet, another Games Workshop tabletop spinoff. Similarly, their creation of an original Legendary Lord, Cylostra Direfin, was quite a surprise.

It’s certainly something that went above and beyond what Games Workshop could accomplish. I can be sure that former tabletop players and lore nuts would appreciate being able to experience the Vampire Coast faction. 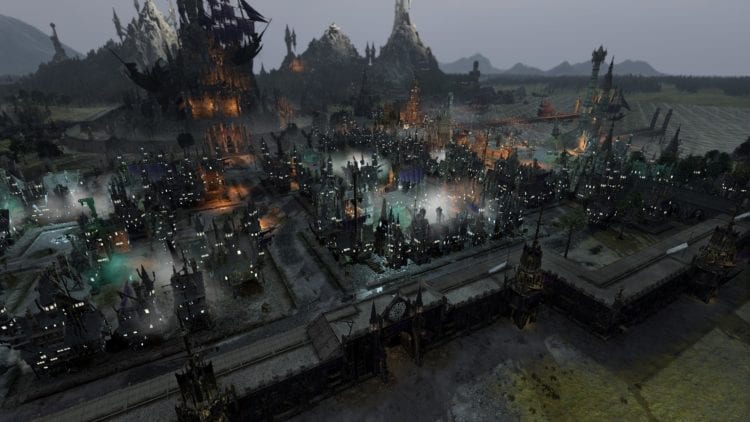 The Awakening: Vampire Coast and Luthor Harkon’s capital. Note the undead port in the distance.

There are, however, a few caveats create some choppy waters for your journey. For instance, if you turned a settlement into a Pirate Cove, you’ll eventually have to destroy it just to remove it or capture it. It doesn’t count as sacking a settlement either so you might fail some mission requirements. Similarly, you could encounter random bugs such as getting stuck in place after establishing a Pirate Cove or sacking. Another, which happened to me a couple of times, was my generic lord randomly dying for no reason; no battle started, no hero attacked, just instant-death. The old reinforcement bug (where enemy units can appear behind your lines) can still happen, albeit very rarely. Likewise, don’t forget that Total War games do have a lot of loading screens. This is a game/DLC that you’ll want to install on an SSD.

Loyalty can also be a pain to manage every now and then. My main choices were perks that added Loyalty after each battle or recruitment drive or ones that lowered its decay. Otherwise, you’ll find yourself exploring too much and stretched too thin. Next thing you know, your pirate lieutenants have mutinied. By design, this will be part of your strategic planning. Unfortunately, it does bog down your playthroughs a bit.

Of course, the biggest challenge to any Total War game is avoiding repetition. While each Legendary Lord does have his or her own quirks, you will often be led to the same path down the road and that’s the climactic battle to defeat a rival pirate (no spoilers) and bind the Merwyrm, Amanar. More often than not, you’ll probably pick the same unit lineup that’s served you well in your previous playthrough. You’ll probably employ the same battle tactics or expansion strategy no matter the lord you chose. It’s a case of enjoying the journey versus the actual destination. 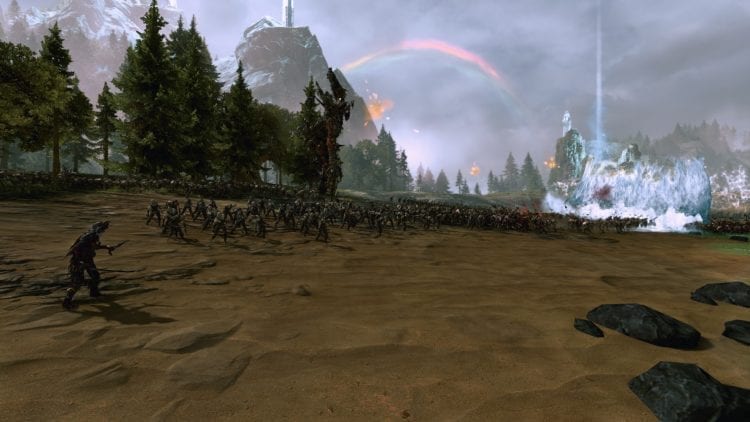 A mini tidal wave for your troubles.

Total War: Warhammer II – Curse of the Vampire Coasts heads off to the horizon

Still, everything else in Curse of the Vampire Coast is skillfully made. You can tell that it’s a nod to long-time Warhammer fans. This DLC follows in the footsteps of the Wood Elves, Norsca, and the Tomb Kings. Fortunately, the presentation is head and shoulders above the rest. Even Norsca, which isn’t a core tabletop faction and yet had Forge World and supplemental units included feels like a distant second in terms of the mechanics that the Vampire Coast has.

Having a fleshed out campaign, unique skills, wonderful units, an exciting adventure woven into real-time strategy battles, and an unbelievably epic final battle will no doubt please a lot of fans. The Curse of the Vampire Coast might just be the best faction DLC that Creative Assembly has released.

It goes without saying that players might also anticipate when more vanilla factions might be brought in-line. Who knows, maybe we’d even see unofficial factions like Araby or Kislev join the fray?

You can grab the Curse of the Vampire Coast DLC on Steam. Likewise, don’t forget to update Total War: Warhammer II to experience the changes from the free Aye-Aye Patch.

Curse of the Vampire Coast rides a wave of momentum, fully fleshing out the Great Ocean of Total War: Warhammer II. Exploration and treasures abound in the DLC, and is a treat for newcomers and long-time fans alike.

Most Of Upcoming DLC for Final Fantasy XV Just Got Canceled