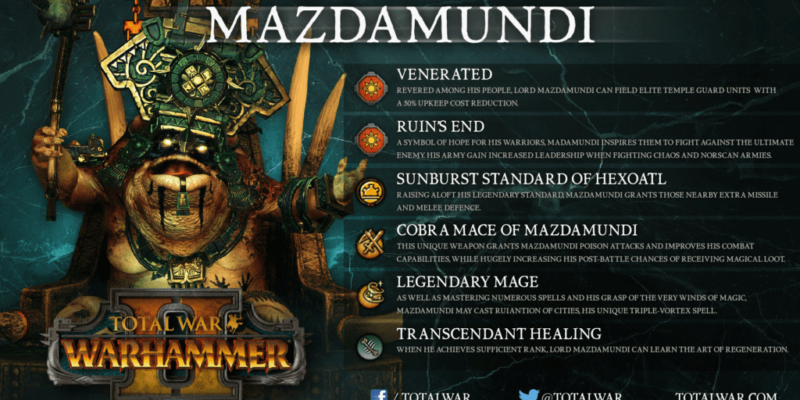 A pair of images summarising the Total War: Warhammer 2 abilities of Mazdamundi and Kroq-Gar have been put out today by Creative Assembly. These two powerful Lizardmen characters are, of course, that factions Legendary Lords.

Mazdamundi can do things like recruit Temple Guard at vastly reduced (50%) upkeep, and provides a leadership boost to his army when battling Chaos or Norsca. He has a poisonous Mace weapon, plus the chance to learn Regeneration at higher levels. As part of his superiority with magic, he will receive a “unique Triple-Vortex spell” called Ruination of Cities. Sounds pretty serious.

Kroq-Gar on the other hand looks like he can reduce the upkeep on Saurus and Cold One units, and also boost the armour and leaderships of the big dinosaur types (Stegadons, Carnosaurs, etc). His own Carnosaur mount, Grymloq, can be taken at level 15. Kroq-Gar also has a legendary spear to aid in battle and with public order, as well as a magic missile spell called Hand of Gods.

There’s more to both of them though, so have a look at the Total War: Warhammer 2 images below (click for larger) for more details. The game will be out on 28 September. 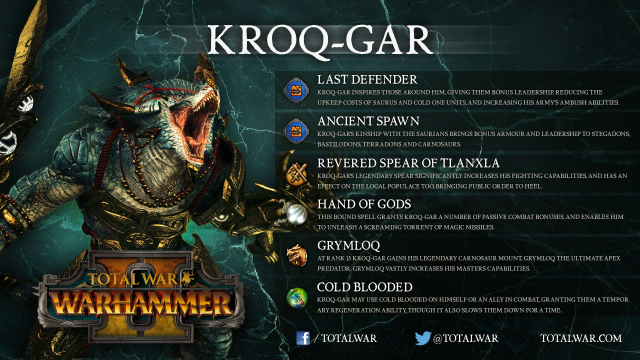