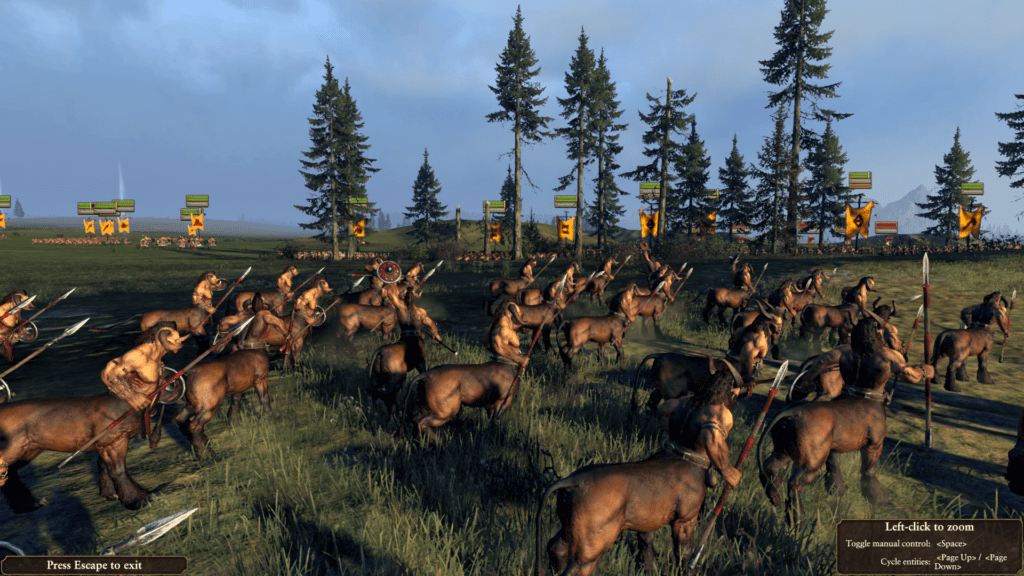 Creative Assembly’s decision to go with Beastmen as Total War: Warhammer’s first expansion army is, at first glance, a bit unorthodox. Prior to 2010, the Beastmen didn’t even headline their own army book in the tabletop game (lumped in with ‘Beasts of Chaos’ in the early 2000s, and appearing as general Chaos units before that). Their steady progression from hangers-on-of-Chaos to beasts with a book of their own suggests the goat-legged chaps have found homes with some players, but they’re unlikely to be topping fan favourite polls.

Take Total War: Warhammer’s current geographical focus into account, though, and starting with the Beastmen makes a fair bit of sense. They dwell in the forests of the Old World and love harassing the Empire, which puts them right in the middle of this game’s map. They also prove to be a better fit for the ‘roaming horde’ faction mechanics (introduced in Attila) than Warhammer’s current Chaos conglomerate.

I’m coming for you, Bringer of Tods.

Call of the Beastmen adds Khazrak, Malagor, and a whole rabble of goat and bull headed followers to the main campaign (playable if you own the DLC, an AI nuisance if you don’t). In addition, there’s a mini campaign called ‘An Eye for an Eye’ which follows a similar structure to the more focused expansions added to Rome 2 (Caesar in Gaul, Hannibal at the Gates). A tighter map, in this case 52 regions stretching from the Marienberg coast to Hochland, and an emphasis on a specific bit of Warhammer rivalry. For this 12-ish hour campaign you’re automatically in control of Khazrak’s host, and have the task of setting fire to Boris Todbringer’s back yard and pushing over his bins.

Your quest is much the same on the grand campaign, just on a larger scale. Rather than just screwing with Todbringer, the Beastmen need to effectively torch Bretonnia and the Empire (plus the Dwarf faction if you’re going for the ultra-long victory). Aside from differences of scale between the two campaigns, and slightly more of a guided narrative on Eye for an Eye, the Beastmen have the same mechanics, tech tree, and so on, in both.

As noted, the horde system works rather well for the cloven-hooved ones. It makes sense for them to be a roaming band, setting up spontaneous camp wherever necessary. The default marching stance for all Beastmen is Ambush, which gives their forces a real hit-and-run feel on the strategy map; particularly if you level up a Lord with ‘Lightning Strike’ (allowing you to deny a target stack nearby reinforcements). Ducking back and forth between recruiting new units and being on the march felt a bit passive when applied to Chaos, but here it’s re-styled as semi-Guerilla warfare. A unique stance, Beast-Paths, lets you move through otherwise impassible forests, opening up opportunities to attack and then vanish into the woods next turn.

The Beastmen in Total War: Warhammer also borrow a little from the Greenskin mechanics, namely the Waaagh! system. Beating up enough idiot humans (or Orcs, or Dwarfs, or other Beastmen, or anybody really) on a regular enough basis raises a Bestial Rage meter. When it tops out, that army will spawn a Bray-Herd, who can be pointed at targets just like a Waaagh. Combined with the emphasis on ambushes, the Beastmen can alternate between a nimble raiding force and an all-out, Bray-herd backed surge of animal fury.

That duality is carried onto the field for the real-time battles. Even if you’re not engaged in an actual ambush, many of the Beastmen units have Vanguard deployment (just like a lot of the scouting units in other factions). If caught by a stronger force, that can give you the chance to get sneaky and stash some troops in a forest for a late rear charge, or let you harass the war machines with some hounds or Centigor cavalry. In other cases (after levelling up several of the Beastmen buildings), it’ll be your force that’s the stronger. Minotaurs make short work of gates during sieges (meaning you barely need any additional equipment), and the Beastmen can also call on hardy Bestigor infantry and lumbering Chaos Spawn for a powerful charge.

Appropriately enough for creatures derived from beasts, it’s guns, armoured troops, artillery, and anything that could vaguely be associated with hunting that tend to be the Beastmen’s trickiest opposition. Running into an Empire force stacked with handgunners, knights and mortars is a death sentence without some sharp tactics. Likewise, the heavily armoured Dwarf armies can cause major problems in a head-on fight.

Minotaurs love a good night out in the Empire.

My quibbles with Total War: Warhammer’s translation of Beastmen are largely extensions of problems from the main game. The Eye for an Eye campaign is supposed to have more of a narrative structure but, like the special quests in the original game’s campaign, the idea is often better than the execution. Too often in the mini campaign I was being given questing tasks that were either miles outside of my current strategy (physically and metaphorically), or had already been messed up by previous actions. One early section wants you to recruit a Bray Shaman, and, given that’s quite a resource investment, the intent seems to be for you to hire Malagor to head a second army. Unfortunately, I’d already done that, but it didn’t count retroactively. By the time I had room for another Bray Shaman, the campaign was practically over.

It’s also a little strange that the one region it’s absolutely necessary to wipe off the map in order to triumph in An Eye for an Eye is not Boris Todbringer’s Middenland, but the coastal merchants of Marienberg. Despite finishing the campaign, I never really figured out why that was the case. You need to wound Todbringer, and Middenland are a target for one of the chapters, but they’re technically optional (at least in the review build, maybe that will change).

In addition, the chapters themselves are pretty unambitious in their objectives. Attack this region, now attack the Cult of Ulric, now attack Middenland. These mini campaigns seem ideal for a bit more experimentation, but the objectives play it utterly safe. The text for the special Beastmen events (particularly those surrounding the Moon of Morrslieb) is much better, combining faction flavour with tactical choices.

Marienberg teeters on the brink.

In what is likely to set a precedent for Total War: Warhammer expansions of this type, Call of the Beastmen costs $19. To veterans of Games Workshop’s tabletop pricing that might barely register. But in videogame DLC terms, it’s fairly expensive. Value and worth are weird, nebulous things. I’d venture this: for those who liked the tabletop Beastmen faction, or who like the sound of their in-game mechanics, and have an interest in both mini and grand campaigns, it’s a good package. If you’re only interested in parts of what’s on offer here (maybe you just wanted a new grand campaign faction, or whatever), it’s a tougher proposition.

The most impressive and compelling part of Total War: Warhammer was exploring the ways in which Creative Assembly had adapted familiar Warhammer tabletop races to their series. Largely, it should be said, with great success. There were gaps in the tabletop version’s gigantic unit rosters of course, and the Beastmen (sadly) are no exception there, missing out on some of their weirder, more-expensive-to-create-and-animate creatures. But overall, this expansion sets a pretty encouraging tone for the factions and races to come. Refining the Chaos horde mechanics, adding some Orcish fury, and the overtone of Guerilla ambush tactics, gives the Beastmen a play-style that deftly meshes tabletop fiction with in-game mechanics.

Abatron plans to blur the lines between RTS and FPS