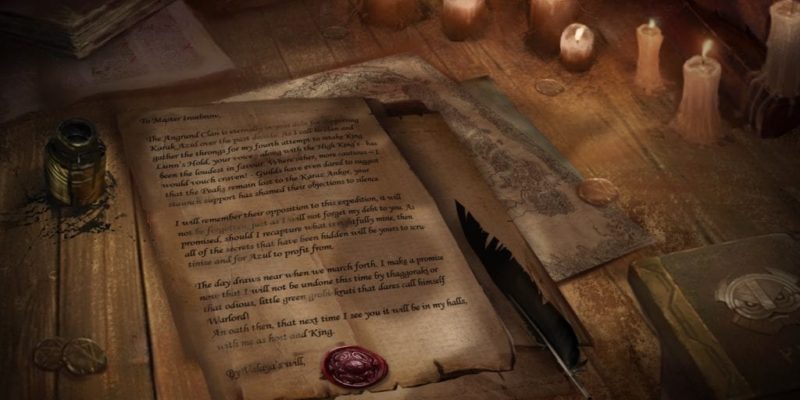 The DLC hints keep coming from Total War: Warhammer’s twitter account; after yesterday’s nod towards Greenskins and Dwarfs, another of those teaser letters has been issued. Much like the one for Beastmen and the Grim & Grave DLC, this contains further hints.

It’s addressed to ‘Master Ironbrow’, a reference to Dwarf Runelord Thorek Ironbrow (often accompanied by the Anvil of Doom), and is most likely being sent by Belegar Ironhammer (head of the Angrund Clan mentioned as being “eternally in your debt”). The “Peaks” which may or may not remain lost are the Eight Peaks; the site of an infamous series of battles in the Warhammer lore.

As indicated by the letter, the Eight Peaks are territory contested by the Dwarfs, Greenskins (specifically, Goblin Warlord Skarsnik – the “green grobi-kruti”) and the Skaven (the “thaggoraki”). Given the prior hints, I don’t think we’re necessarily about to see Skaven show up just yet, but another Grim & Grave style release with either Ironbrow or Ironhammer and Skarsnik as the respective Legendary Lords for Dwarfs and Greenskins seems increasingly likely.

If that turns out to be the case, the Greenskin Total War: Warhammer roster should end up with cave squigs (or one, at least, Skarsnik has a huge pet one called Gobbla). This is still in the realm of speculation of course, but that’s the sort of thing this letter is pointing towards.

Update 12 October: This has now been officially announced as The King and the Warlord DLC.

Here’s the full text of the letter, for ease of reading:

The Angrund Clan is eternally in your debt for supporting Karak Azul over the past decade. As I call to clan and gather the throngs for my fourth attempt to retake King Lunn’s Hold, your voice – along with the High King’s – has been the loudest in favour. Where other, more cautious – I would vouch craven! – Guilds have even dared to suggest that the Peaks remain lost to the Karaz Ankor, your staunch support has shamed their objections to silence.

I will remember their opposition to this expedition, it will not be forgotten just as I will not forget my debt to you. As promised, should I recapture what is rightfully mine, then all of the secrets that have been hidden will be yours to scrutinise and for Azul to profit from.

The day draws near when we march forth. I make a promise now that I will not be undone this time by thaggoraki or that odious, little green grobi-kruti that dares call himself Warlord! An oath then, that next time I see you it will be in my halls, with me as host and King.

Hitman invites you to finish the elusive Fixer on 14 October