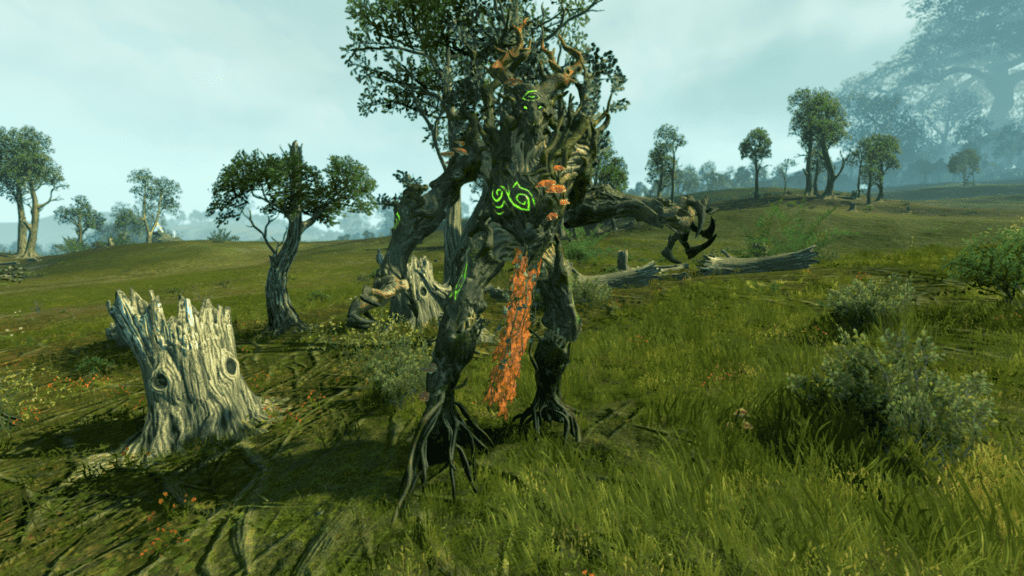 After the Beastmen, so must come the denizens of Athel Loren. Total War: Warhammer’s second major faction expansion sticks to the forests, but this time adds pointy-eared, isolationist aristocrats as a foil for the grunting goat-men. Bretonnians, the third partner in this bizarre Warhammer love triangle, make a wider appearance in the Realm of the Wood Elves mini-campaign and are in-line to be a full (free) faction early next year.

With the Beastmen, Creative Assembly took the ‘Horde’ mechanics used semi-successfully by the Chaos faction, and applied it to a more suitable candidate. The basic systems were already in place, but they were a better fit for the ambush-inclined Beastmen and their wider roster of farmyard-inspired foot soldiers. This refinement worked very well, to the extent that Chaos themselves may well be getting a more extensive rethink in future.

Realm of the Wood Elves is more about building a faction around brand new ideas, which makes them more enjoyable to figure out and play, but also a little uneven in places where the systems are over-stretched.

Speaking of stretching, Orion stays in shape with a daily bout of Beastman-skewering.

Wood Elf campaign victories (in both grand and mini versions) center on nourishing the Oak of Ages within Athel Loren back to full health. The faction are a mass of contradictions, combining earthy, Pagan-style forest worship with snooty aristocratic hierarchy. Their Elven ancestry compels a self-aggrandising sense of nobility, but the Wood Elves are not above a spot of child kidnapping or bloodthirsty sacrificial killing if it serves some arcane, ancient purpose. Manipulating Bretonnian politics is also a popular pass-time. This world of contrasts is typified by The Wild Hunt; a seasonal period of slaughter that nonetheless has an attendant ministerial role.

Pretty much everything the Wood Elves do in the game requires a new resource: Amber. It’s used for the aforementioned growth of the Oak of Ages, in (optional, but very useful) tech research, certain top-tier settlement buildings, and for different top-tier units (depending upon which Legendary Lord is in charge of your forces). Amber can be acquired through conquest, as each captured settlement or capital will give you one or two more respectively, or through diplomatic alliances. Unlike other races in Total War: Warhammer, the Wood Elves can capture and hold any area on the map; but anything taken outside Athel Loren can only be lightly protected as an outpost.

The result is a faction who need to balance a selection of diplomatic allies (and there are specific tech/research choices for this) with robust ‘home base’ protection, and exploratory expeditions of Amber-seeking conquest (or finance-easing razing) all over the campaign map.

Or you can just stay at home and wait for the Beastmen to come to you.

That mostly works out, but there are a few awkward problems. Your fellow AI Elf factions don’t seem to play by the same Amber rules, so confederation can inadvertently send you into a crushing deficit. Likewise, being at the whims of slightly inconsistent AI diplomacy for the Amber you maintain through alliances means keeping an emergency surplus on hand at all times. The fragility of outpost settlements are another factor in these resource fluctuations.

It’s possible to claw some back through disbanding forces, but there doesn’t seem to be a way to either scale back settlement costs or ‘roll back’ tech research to make up an Amber shortfall. The precarious economic nature of the Wood Elves makes for some tense play (which is welcome), and it achieves its goal of making players think about the longer-term strategic consequences of their choices. But a bit more flexibility in the Amber budgets would help to turn situations where you’re inclined to just give up and reload into a crisis that can be enjoyably salvaged.

On the field (or, more likely, woodland floor) of battle, the Wood Elves are more micro and skirmish heavy than other factions. It is possible to construct a Wood Elf army to maintain a more traditional Empire/Dwarf style formation with a front line of tough troops soaking up attrition (particularly with Legendary Lord Durthu’s treekin and treemen, and/or some campaign melee buffs), but that’s not really the faction’s default state. Elves have high morale and will fight to the bitter end, but they also have low unit numbers and can melt away under sustained missile fire or in meat-grinder melees.

However, they also have access to several units who can perform ‘rolling retreat’ type manoeuvres, including cavalry archers, hawk-mounted archers (who actually seem to be more useful as light melee cav), and specialist archers who can shoot while moving. Swift, mobile infantry units like Wardancers are versatile shock troops and flankers, while the aforementioned tree-folks can be capable bruisers. Eternal Guard (basic Elven Spearmen) can be resilient troops with the right campaign skill buffs.

Their archers, of course, are extremely handy too, but they’re not the automatic win button some had predicted prior to launch. Just like their tabletop counterparts (at least, from the era I used to play), they’re fine bowmen hampered by low numbers. In a stationary shooting match, they will often lose against cheaper, ‘worse’ ranged units. Campaign techs and skill bonuses can turn the Wood Elf missile units into proper doom snipers, but the default versions need to be used carefully. It doesn’t help that their ‘Forest Stalker’ skill (which should increase accuracy within forests) is currently negated by the fact that ranged units inside Total War: Warhammer’s forests tend to just unload all their ammo into trees by accident.

That’s a rare act of ineptitude for a faction that is otherwise replete with units that are a mixture of elegance and fury. Being able to defend the forests with giant eagles, crazed, stag-mounted elves, and manifestations of the trees themselves makes you feel like a proper guardian of the glades.

As with the Beastmen DLC, Realm of the Wood Elves comes with a mini-campaign on its own zoomed-in version of the main map. In this instance, that means a much expanded (and rather beautiful) Athel Loren, surrounded by Bretonnian lands and under perpetual assault by persistent Beastmen. Like the main campaign, the goal here is purloining enough Amber to refresh the Oak of Ages. Once you’ve done that, you get to beat up the otherwise-invincible Beastman Lord Morghur in a climactic final battle.

It’s likely to be a bit of a ‘one and done’ affair for most players (maybe twice if they decide to do co-op, or play as the other Legendary Lord), which has re-ignited the debate over whether these smaller campaigns are valuable inclusions in Total War: Warhammer’s faction add-ons, or a bit of an unwanted nuisance adding to the overall cost. As someone who has always enjoyed Total War campaigns that take place in tighter quarters, I lean towards the former opinion; but I don’t think either of the mini-campaigns released to date have played to their fullest potential.

Shorter campaigns could probably best serve as a way to introduce factions in a more controlled (possibly more heavily scripted and linear) environment, or as an excuse to cut loose and do something highly distinct from the main campaign. But while Creative Assembly have tended to gesture towards the first model, they haven’t quite committed to either of them. The Wood Elf mini-campaign actually has you playing them more like a standard faction. Much of the map area consists of Athel Loren’s divided Elven factions, so you have much more room to put together a traditional, building-based economy.

Leaving the forest at all is pretty optional in the mini-campaign (and generally not advisable, since Beastmen will be coming at you most of the time), which is a bit of a shame because it means you probably won’t even meet the Greenskin faction, or the Red Duke of Mousillon in the Northwest corner. With so many new ideas and challenging mechanics backing them, it also seems a bit anti-climactic to base the smaller Wood Elf campaign around what’s essentially a wave-based survival mode. It’s fine, but feels like a slightly missed opportunity to put a wonderful, compact campaign map to better use.

Amidst the foliage of the forests and glades, there are also a couple of bugs. I’m pretty sure diplomacy stopped functioning correctly during my mini-campaign, as despite being the best of chums with other Elven factions they began to refuse so much as a non-aggression pact. One of Orion’s Legendary Lord quests called for three Wild Rider units to be in his army, but apparently doesn’t feel Wild Riders with shields count as acceptable. None of the Elf Lords seem to receive Followers either, though whether that’s a bug or by design isn’t really clear. Plus, there’s the previously mentioned issue with archers peppering tree trunks with arrows, instead of their enemies.

Right, is this open enough for you lads to avoid aiming directly at branches?

Realm of the Wood Elves is a successful continuation of Creative Assembly’s ongoing philosophy with Total War: Warhammer; the addition of new factions, with diverse play-styles, which still adhere to their tabletop equivalents. Wood Elves are enigmatic isolationists who play inscrutable political games, and descend in clawed and bladed fury upon anybody who sets foot in their forest without invitation. That, broadly, is how they play in this DLC. The Oak of Ages has to be protected at all costs, diplomacy is a prime route for obtaining Amber, and any outposts established beyond its borders will be temporary and fragile.

That Amber economy is a little overbearing in its prominence, to the extent that building Amber-costing units as Durthu or Orion rarely feels like a wise investment with so many other more important things to spend it on. The mini-campaign has its shame of flaws in execution too, and is unlikely to change any minds in the pro or anti camps.

Out on the plains and forest floors, the Wood Elf forces emphasise mobility, micro-management (which can just mean lots of using the pause button in single player), and, to perhaps a lesser extent than expected, archery prowess. They represent another smart translation from tabletop to Total War, and add further tactical challenges to Creative Assembly’s ever-evolving game through their expanded economy and unique campaign goal.