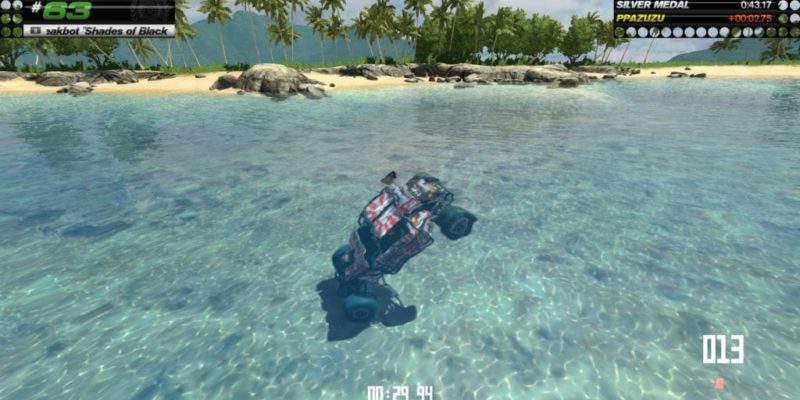 Nadeo’s unashamedly bizarre Trackmania series is one that can be difficult to keep up with, because the strangeness even extends to the manner and framing of their release. Trackmania 2 is actually still an ongoing enterprise on PC, with the ‘Lagoon’ tracks due in the near future. That particular game is also housed within the curious Maniaplanet front-end (Nadeo’s own Mania-game-centric platform), which allows for some pretty chaotic, anything-goes multiplayer activities, but may also be considered a bit of a barrier to entry.

Trackmania Turbo is not the series’ first time on consoles (there was a Wii one). It’s probably fair to say, though, that this is more of a major push for that market. The developer has actually been reasonably up-front about the nature of the PC version, confirming on Steam that the reason for omissions like dedicated servers is because this one is “a console game ported to PC.”

That decision has removed some of Trackmania’s rougher edges and made Turbo a more approachable, ‘normal’ game; but in doing so has somewhat sanitised or outright removed some of the anarchic aspects which catapulted the series to cult PC status. 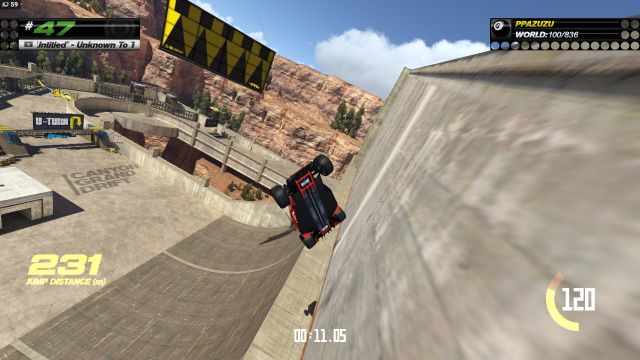 Before exploring those changes in greater depth, I should note that Trackmania Turbo’s uncompromising (but admirably punishing) approach to track unlocks means I’ve not played and completed every single course in campaign mode. Doing so involves getting a gold medal (or better, there’s one above gold) on each and every track, which is quite possibly beyond my skills as a driver. This does not technically comply to the letter of the PC Invasion “play to completion” review policy. Sorry about that. Trials: Fusion gave me a similar dilemma; it was a choice between covering this game based on incomplete knowledge of every course, or not reviewing it at all.

Luckily, the local and online multiplayer modes do allow access to all but the very hardest set of tracks across the four Canyon, Valley, Lagoon and Stadium environments, so it’s been possible for me to at least drive on quite a few of them (albeit not exactly raking in the gold medals).

Much of the PC audience will be aware how Trackmania works, but for those who don’t it’s essentially a narrow-margin time attack racer on (mostly) short and (often) kind of insane courses. In solo play, you’re attempting to match or beat the bronze, silver, gold, or hidden ‘trackmaster’ medal times, which can come down to attempting to shave 00.00.02 seconds off your time. Traditional racing ghosts from any medal slot can optionally accompany you, and your previous best run tends to show up by default too. 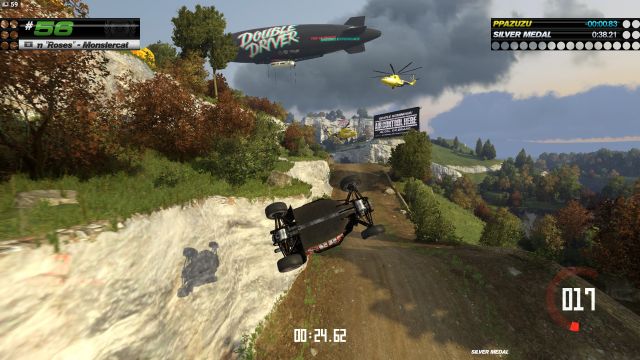 No need to panic, I’ve got this.

The heart of the series’ solo challenge is this constant drive for self-improvement across tracks that get increasingly weird, and Trackmania Turbo delivers this feeling just as well as prior entries. One of the four environmental settings is called ‘Rollercoaster Lagoon,’ and is quite happy to throw out loops more befitting of a theme park. Other tracks might give you a vertical wall to drive up, followed by a (still vertical) jump across empty space, with the expectation that your angle and speed of approach will be enough to nail the landing. If not, an instant restart of the course is a quick key or button tap away.

In case your eyes just kind of darted over those last few sentences: Trackmania is a racing series that sends you up vertical walls with turbo boost pads and hundreds of feet into the air off massive jumps. You’re as much a performance artist as a driver, perfecting your internal-combustion powered dance over multiple failures and restarts.

Mid-track checkpoint restarts can be used too, but these are really only useful for scouting out and practicing the course; to set a top time you absolutely must do the track in one shot, with no mistakes. As added motivation, Trackmania Turbo keeps track of your times relative to others who’ve selected the same region as you. For the US, this gets down as far as State level. So while you may never be the best in the country, there’s always the State Top 50 to shoot for.

Unfortunately this is weirdly depersonalised, because there doesn’t seem to be any straightforward way to look at (say) who has the best time in the world. You’re aware of roughly where you are in the rankings, but not what sort of time you should be aiming for to be the best of the best. 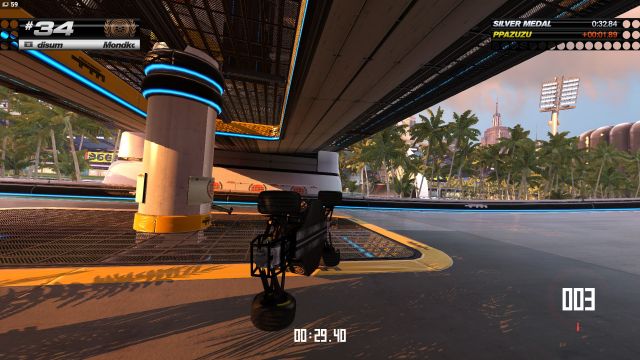 This is all ABSOLUTELY fine.

As in previous entries, the handling of Trackmania Turbo cars differ per environment. It’s firmly on the arcade side overall, but Canyon tends to be about large, sweeping drifts around corners. The classic Stadium car has greater downward thrust, giving you more of an arcadey approximation of F1 control. Valley tracks often have a lot of off-road sections, where the buggy-like vehicle handles like a particularly clumsy mammal on ice. And the Lagoon car has an extremely rapid and tight, almost magnetic, turning circle.

Traditionally, Trackmania has favoured the digital input of a keyboard. Analog controller inputs seemed to become much more viable from Trackmania 2 onwards however, and Trackmania Turbo seems to control fine with either option (though bear in mind that I’m hardly a pro at this game). Control inputs can only be rebound on keyboard, though. Not, oddly, through ‘settings’ on the main menu, but by hovering the mouse over a hidden drop-down bar at the top of the screen. Unless you have a customisable Steam controller, your pad layout will always be the default one.

If a track is genuinely too hard, Trackmania Turbo will offer you a ‘Joker’ pass after a pair of successful attempts at the medal tier below (so you get a Joker silver if you prove you can manage it a couple of times at bronze). However, the medal itself will be missing from the track screen, with nothing in its place but hollow, mocking emptiness, displaying your shame for all to see and daring you to do the course properly. 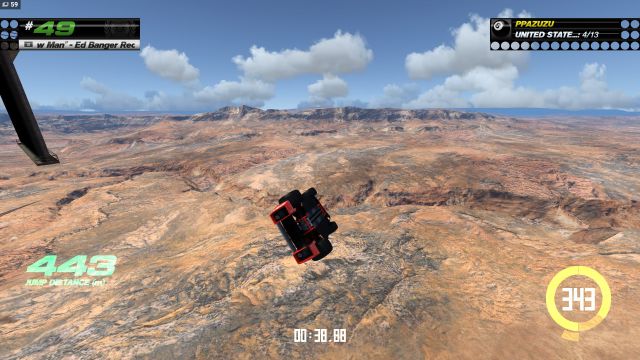 Okay, yes, this may be a slight problem.

Online multiplayer is where Turbo deviates most from prior releases. The lack of any dedicated servers means the full blown absurdity of a Trackmania multiplayer session just isn’t possible. No custom soundtracks, no custom cars, no joining a server to discover it’s some kind of utterly bonkers platform map that only the enigmatic author has any chance of finishing. Granted, that latter case (and the new UI, which replaces Maniaplanet’s old explosion of confusing on-screen boxes) could be argued as points in favour of Trackmania Turbo being friendlier and more approachable; but it also sucks a significant amount of the bizarre fun out of online play.

Other odd design decisions like the lack of horns (it seems like a small detail, but this is emblematic of the game being made just a little bit more mundane), and the apparent inability to switch off player ghosts, also stand out. Like the solo campaign, online play is pretty much about time attack. As many as 100 players on a single track get five minutes in which to repeat the course and attempt to set the best possible time (at which point the playlist moves on to the next course). In a stripped down kind of way this is just as good as it has always been, though being unable to toggle off the rival ghost cars can make focusing on the race a touch tricky.

The weirdness all seems to have migrated to local co-op modes, where you can now play a two-player ‘Double Driver’ mode in which Trackmania takes the average input from both players to direct the lone, on-screen vehicle. There’s also a strange set of semi-hidden modes based around the input of three-button codes. These do things like put both players on a single screen (and, in what I believe is a first for Trackmania, adds collisions), or switch the accelerator function to a single key you have to mash to maintain speed. Undeniably fun (and funny) in short bursts, but perhaps not set up for great longevity. 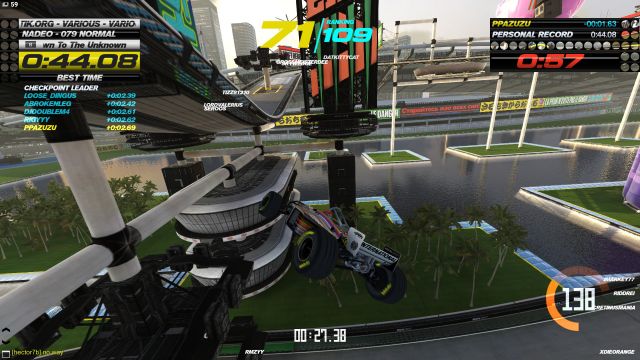 Shut up, I can still win this.

At first I thought the in-game track creator had been lumbered with a not especially appealing radial, console UI; but in fact this is another option that’s semi-hidden. It’s possible to switch back to the classic trackbuilder PC UI via another drop-down menu accessed at the top of the screen. I’m not at all experienced with creating Trackmania courses, but the editor (once switched back to ‘classic’) appears identical. You can build tracks from any of the four environments, and there’s a ‘random track’ option if you just want something quick and new to race on (or a base for a custom design of your own). As you’d imagine with generated tracks, these random creations vary in quality.

The PC version has an uncapped frame-rate and supports resolutions up to 4K, so it hasn’t been neglected there. You have to use Uplay to launch it (even if you own it on Steam – it’s one of those), but in Ubisoft’s defense I’ve not run into any server trouble in pre-release or on launch day, traditionally the most troubled period for online games. There’s supposedly support for Virtual Reality headsets too. Testing that would require me to own one, though. And risk my bodily fluids by racing at high-speeds through first-person loop-the-loop segments. Neither of which is the case.

Trackmania Turbo, then, is a bit of an unusual beast for the PC audience. The central time-attack premise and solo campaign are as solid as (and better looking than) ever, though the apparent inability to simply track in-game global records is a puzzling disappointment. Online, the curious and oft-chaotic flair that made Trackmania’s name on PC is sadly muted in this release; passed over in favour of some, admittedly inventive, local multiplayer modes. This is a reasonable entry point for the series, as the environments are collected in one place rather than being fragmented like Trackmania 2, but the slightly sanitised online multiplayer is unlikely to be palatable to a dedicated, long-term fan. It’s as if Trackmania grew up and got a proper job and a mortgage; it’s more sensible and socially acceptable now, but some of the spark that made it so engaging has been lost in the transition.