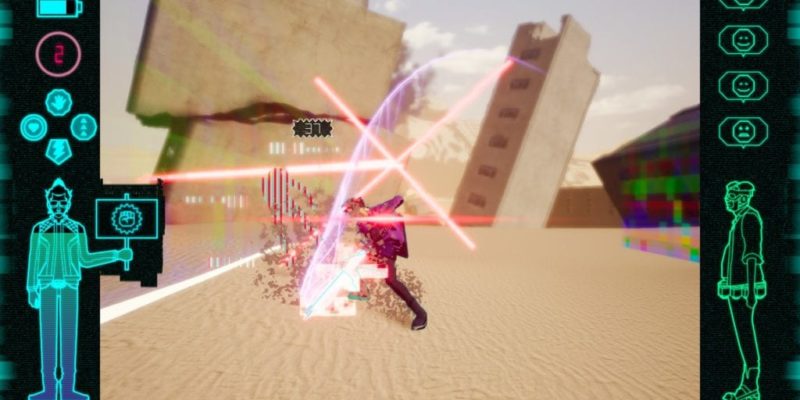 I’ve been playing Goichi Suda’s games on and off since Killer7 back in 2005. I enjoyed the other No More Heroes games and even Lollipop Chainsaw, but his titles are well-known for using his unique sense of style as a crutch and skimping out on the gameplay. The awkwardly-titled Travis Strikes Again: No More Heroes not only fails to break from this, but worsens it with gameplay that’s boring, repetitive, and obnoxiously simple – even by Suda’s standards.

As may already be clear, I’m not in the best of moods as I write this. Minutes ago, I was slogging my way through Travis Strikes Again‘s final level – an exceptionally tedious, dull foray into featureless mazes punctuated by endless waves of enemies – only to find that an enemy I needed to defeat had not spawned correctly. I re-loaded my save multiple times. Exited the level and tried going there again. I even watched a YouTube video to see if I had missed something. Finally, I re-installed it. But nope, a large skull that was blocking a teleport panel wasn’t generating the enemies it was supposed to and was instead invincible. As of right now, the game is impossible for me to complete.

Travis Strikes Again isn’t a full entry in the No More Heroes series, which is why that title is put after the game’s name instead of before. Instead, it’s a smaller-scale spin-off that functions as a top-down hack-and-slash. The story begins when Badman – the father of Bad Girl, who Travis dispatched in the first game – tracks him down to kill him out for revenge. Instead, he attacks him and accidentally activates a video game console called the DeathDrive Mk II that Travis just happens to have in his room. The console proceeds to pull them both into the game. 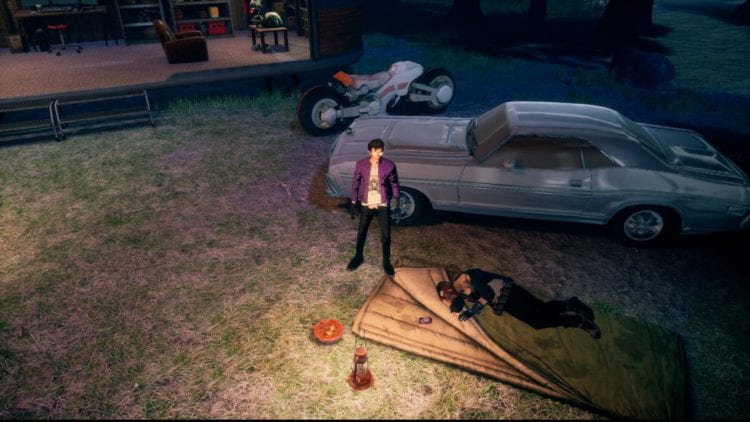 This is basically Travis’ base camp. You can walk around and pick if you want to watch the next visual novel section, enter the games, buy and change into new shirts, and read magazines or faxes.

Immediately, Badman forgets about wanting to kill Travis, and they decide to just work together to find all six of the super rare consoles games which only come on death balls. He who finds and completes all six is said to be granted a wish, which Badman wants to use to bring his daughter back to life. Travis Strikes Again sees the two of them playing these games. That being said, Badman has next to no presence in the story. It’s a typically bizarre Suda narrative. It does have more depth than his usual games, though, as there are many references to his past works and his experiences as a game designer.

The idea of taking Travis into six different games is a fun one, I won’t lie. I was really curious to see how Suda would leave his comfort zone and pay homage to games he’s fond of. But that doesn’t happen. Travis Strikes Again is mostly about slogging through long, bland levels while hacking and slashing enemies. The enemies are all computer bug-themed and are the same regardless of what game Travis is in.

There are occasional gimmicks that each “game” has, though. The second one sees you hitting devices that rotate the streets of a neighborhood while a skull gives chase, instantly one-shotting you if it touches your character. The last section of this is extra-awful, as you can’t actually see what changes are being made to the streets around you due to poor placement. Plus, the skull chasing you means you have to run away every few seconds. Another game has races where all you really do is change gears and boost a single time to win. Those are very poorly explained and annoying, even if they look cool. 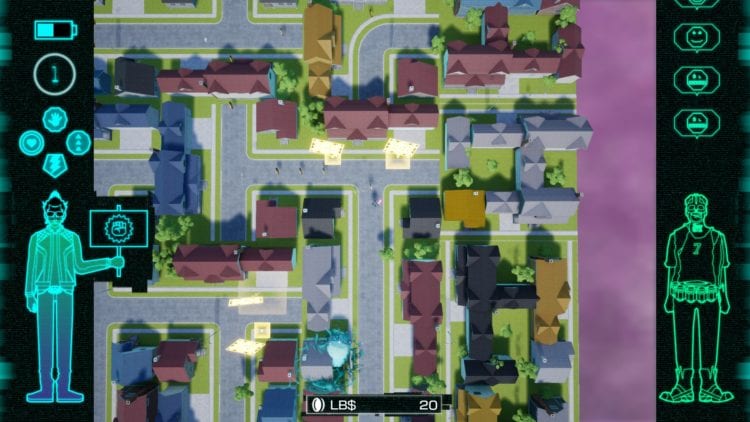 This part was insanely annoying to me. It seems kind of cool at first, but, much like the rest of the game, wears out its welcome fairly quickly.

I can’t help but feel that Travis Strikes Again completely wastes its premise. Occasional gimmicks aside, you just walk through levels, stopping constantly to fight waves of enemies. What could have been creative and fun is instead hours of doing the same thing repeatedly. Still, if you’ve played other Suda games, you know the combat in those can be pretty fun, even if they are repetitive. This one’s the same, right?

Travis Strikes Again‘s combat is competent at best and dull and aggravating at its worst. There are two playable characters, Travis and Badman. Each gains experience as they fight, which players can use to level them up. Travis has his beam sword again, which comes with a weak and strong attack. The weak attack is extremely fast but does so little damage that it’s only really useful against the weakest of enemies. I spent most of the game mashing the strong attack, which does a good amount of damage but leaves you very open to enemy attacks. Travis can also dodge and equip four skills that he can use during combat.

The dodge doesn’t cancel attacks, however, greatly limiting its usefulness. A lot of the time, it appears that there’s simply no way to avoid taking damage during Travis Strikes Again. You need to get in close to do any real damage to enemies, but if you’re attacking them, there’s often no way for you to get out of their range in time. Travis does get a few extra lives with each level, though, so it’s not like you’ll have to replay sections due to this. It just doesn’t feel good. 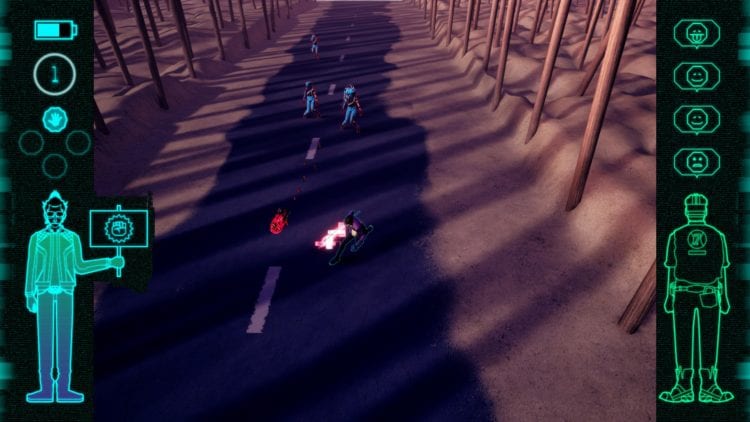 Then there’s the fact that combat just never changes. There’s a good amount of enemy variety, but you’ll mostly just continue mashing one attack button and using the occasional skill. I wish there was a block or parry of some sort to add something to it. But without anything like that, the combat doesn’t evolve at all over the course of the game. And there’s so much of it. Eventually, Travis Strikes Again throws multiple waves of enemies at you seemingly every few steps you take. It’s monotonous.

Travis Strikes Again mostly tries as hard as it can to be meta. Other Grasshopper Manufacture games are namedropped, and characters routinely break the fourth wall. Suda even includes a satirical take on the origins of Shadows of the Damned, touching on that game’s original name and coming up with a similar explanation for why it was changed. Being meta is fine and all, but it honestly just feels like all the game has.

It wasn’t particularly clever or entertaining a lot of the time. It’s mostly just there to be there. And, much like the combat, it wears thin after a while. A solid chunk of Travis Strikes Again is dedicated to visual novel sections that use nothing but the color green in order to look like text-based computer games from the ’80s. This is cute for the first few minutes, but it loses its novelty after a while. The same could be said about how the game thinks it’s endlessly entertaining to keep pointing out that it runs on the Unreal Engine. 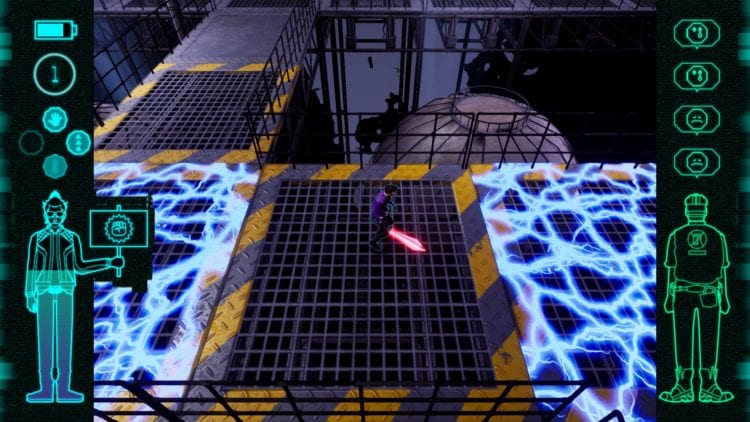 This isn’t a particularly good-looking game, either. The levels are very repetitive in regards to assets, and they’re fairly bland as well. The character models seem fine, but the camera is positioned so far away that it’s difficult to notice much detail. Sometimes the camera moves so far away that I couldn’t even tell what I was looking at. I certainly couldn’t see my character or what enemy I was fighting when the mob obscured my vision. Even the damage numbers that pop up can block your view.

So, I didn’t get to actually finish the game. Judging from a video I saw, the bug hit me about thirty minutes before the end, so I played the vast majority of it. This version comes with all the DLC, but as that doesn’t unlock until the game is completed, I didn’t get to see any of it.

Travis Strikes Again isn’t even a bad game, but it is a mediocre one. The game is too centered around its boring, monotonous combat for its own good. And the levels feel padded to the brim, seemingly just to stretch the game out. To be honest, I’m actually somewhat relieved that I didn’t have to play that last half hour or so, as that final level was the most awful thing the game had to offer.

If you’re a big Suda fan, you might find some enjoyment here. For everyone else, though, this game will likely be a tedious slog.

I really wanted to like this game, but it makes it very difficult. From the bland levels to the horribly repetitious nature of the simple combat, Travis Strikes Again is a really mediocre time. And that gamebreaking bug certainly didn't do it any favors either.