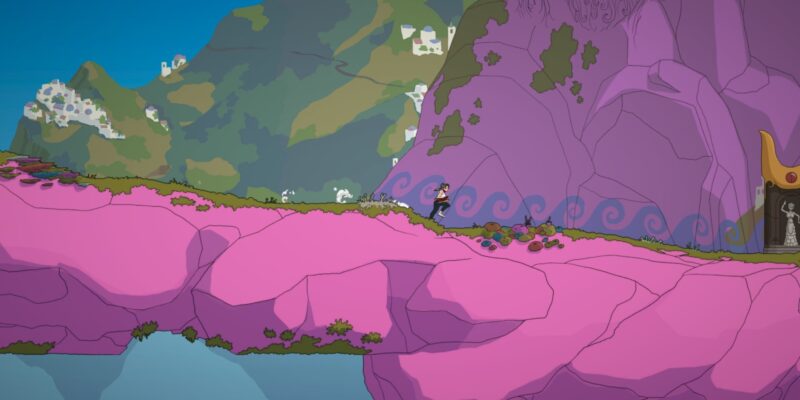 Outer Wilds made an enormous splash on release back in 2019. Featuring a time loop — that you had to figure out by dying repeatedly while you learned new tidbits each time — made for an undeniably unique, compelling experience. It was only a matter of time before others started following suit. Yes, Treasures of the Aegean also sees you racing against the clock to accomplish actions in a loop that will stop everything from going kablooey. Although it’s a side-scroller, its inspiration is insanely clear. But, it succeeds not because it copies, but because it puts its own spin on the formula while, dare I say, improving upon it in some impressive ways.

Treasures of the Aegean puts you in control of a treasure hunter named Marie. Her partner has located the mythical island of King Minos, hidden away in part of Crete, so the two set off to learn what they can and make it out with treasure aplomb. But, the island’s volcano is somehow erupting and bringing about the explosion of the planet. It’s up to Marie to solve the island’s mysteries and save the world from its impending doom. Awfully convenient that the entire world explodes 15 minutes after she sets foot on the island, isn’t it?

Of course, this is a time loop game, so there’s more to it than that. Due to godly magic, the island is set to repeat this disaster incessantly, which traps Marie as well. Unlike Outer Wilds, there’s a focus on narrative presentation here as opposed to finding logs and the like. There are comic book-style cutscenes, and you’ll learn more about the main characters through playable flashbacks that occur between loops. The story is solid, although the English translation has a surprising number of errors that I hope are fixed shortly. Treasures of the Aegean is even more interesting if you’re into Greek mythology. 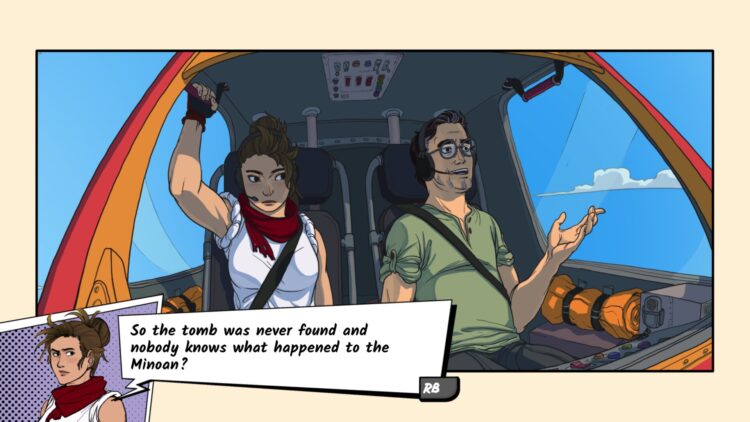 The basic structure of Treasures of the Aegean is just like Outer Wilds. You start a loop and you have to do specific things if you want to not die. You’re on a time limit. When it runs out, you go night-night. But, there are massive differences that make playing it quite different from its forebear. For one, the time limit is clearly listed onscreen. You can get hurt, either by falling from a great height, getting shot, or running face-first into enemy soldiers, but you don’t have a life bar.

Instead of losing health, you lose a minute. If you’re careful, this won’t happen. But, when you’re racing against the clock to accomplish something before the loop ends, accidents will happen. Instead of starting each loop in the same spot, Treasures of the Aegean drops you somewhere on the island. This forces you to adapt to circumstances on the fly and proved a fantastic decision. The game’s entire map is available to you from the outset and simply moving throughout the world will fill your map screen in.

Additionally, you’ll also take permanent notes whenever you find something of interest. Treasures of the Aegean has a screen called “the prophecy” that shows you the general area of critical points of interest, as well as details on what you’ve learned. Unlike Outer Wilds, which delighted in being aggressively obtuse, you’ll figure everything out here as long as you keep exploring. You can even place icons on your map to make note of anything you want. This leads to an extremely satisfying game loop where you seek out unexplored corners of the map and increase your knowledge of the island’s layout. 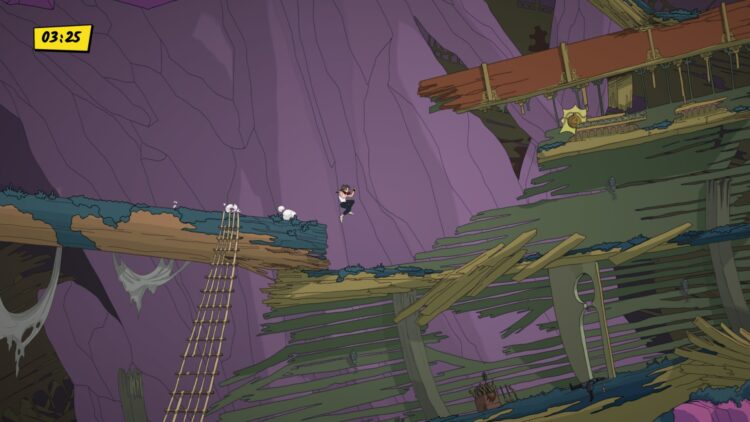 Ticking away, the hours that make up a dull day

If 15 minutes doesn’t sound like a lot, one very pleasant surprise is that you’ll get more time added as you progress. “The prophecy” screen is surrounded by circles that correspond to treasures. For every treasure you find, more time is added to the loop. When all is said and done, you’ll have over 20 minutes to do what needs doing, which is plenty of time to succeed. It’s a joy to explore the map until you feel comfortable enough to get your bearings, only to change focus as you go.

Earlier on, I mostly focused on filling out the map and grabbing treasures. Then I started solving puzzles. Treasures of the Aegean has some unlockable items that you can pass on to subsequent loops, which I greatly appreciated. Solving certain puzzles will allow you to bypass them if you need to do them again. Any non-treasure items do need to be re-collected on subsequent playthroughs if you haven’t finished using them when the loop ends, though. Treasures all have a yellow aura, while these other items have a darker one. Many of them are related to critical puzzles, but there are a few bonuses.

A few puzzles have to do with collecting three gems to obtain blessings from spirits at shrines, which give you permanent upgrades. Treasures of the Aegean is perfectly beatable without them, but they’re nice to have. When push comes to shove, though, your goal is to locate and solve three puzzles within the time limit, before making it to a specific point. The way the game goes from wholly unknown to intimately familiar while incentivizing certain aspects is masterful. Knowledge will also help you with puzzles. I often took screenshots of puzzle solutions and referred back to them to get things done more quickly. 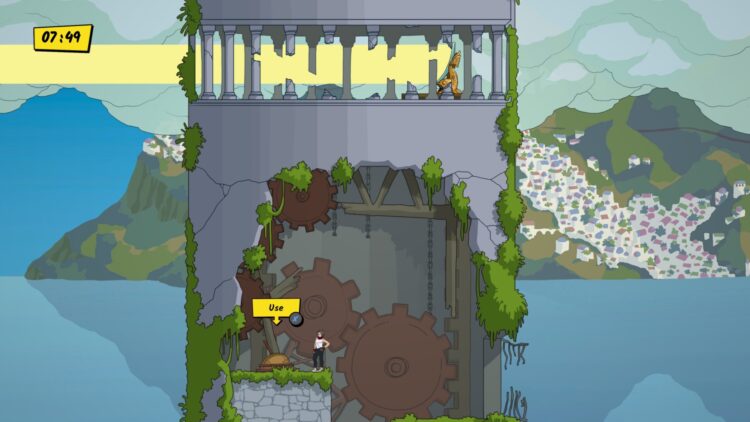 A lot of the above wouldn’t mean much if the game wasn’t enjoyable to play, but Marie’s movement is fast and fluid. Running, jumping, climbing, swinging on vines, wall-jumping, sliding, she can do it all. She moves at a breakneck pace that’s perfect for the game world. It can occasionally be a bit tricky to pull off certain commands due to how the movement emphasizes speed, but I love the mobility on offer here. It really does remind me of an open, fluid Prince of Persia game. Or maybe a super-fast 2D Tomb Raider.

Treasures of the Aegean took me about eight hours to complete, and that’s with me doing nearly everything. I think I’m missing six of the game’s 100+ treasures, plus a thing or two on “the prophecy”, but I found most things. I’m happy with the length too. There’s also room for players of multiple skill levels to get through as quickly or as slowly as they want to. I’m horrible at following breadcrumbs and using them to solve puzzles, so many folks will likely be faster than I. But, I also beat the game without needing outside help, which is something I never could have done with Outer Wilds.

I wasn’t expecting to walk away as impressed as I am by this game, but it really is something special. It’s easy to scoff at it due to how it wears its primary structural influence on its sleeve, but really, it mostly uses the basics to forge its own path, making for a unique, captivating experience with wonderful movement and sharp world design. If you love exploration and filling in the blanks of a world piecemeal, there’s absolutely no reason not to pick up Treasures of the Aegean. 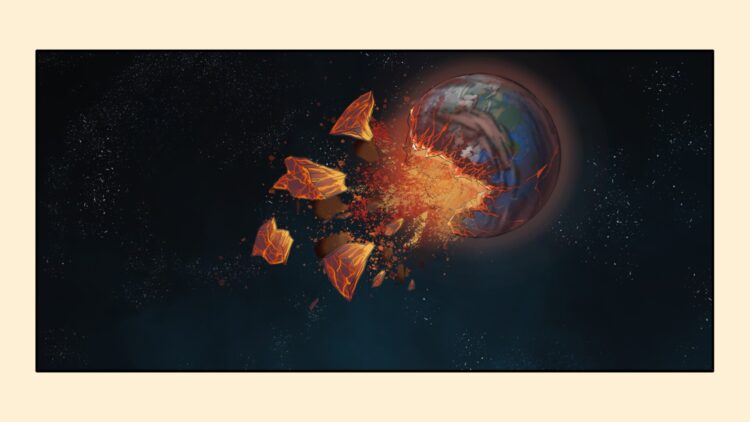 Treasures of the Aegean

With fast movement, an interconnected, memorable world, and plenty of tools at the player's disposal, Treasures of the Aegean offers up a lot of enjoyable gameplay and level design.

Jurassic World Evolution 2: How to unlock all dinosaurs and buildings for Sandbox Mode

By Michael Feghali19 hours ago
Reviews