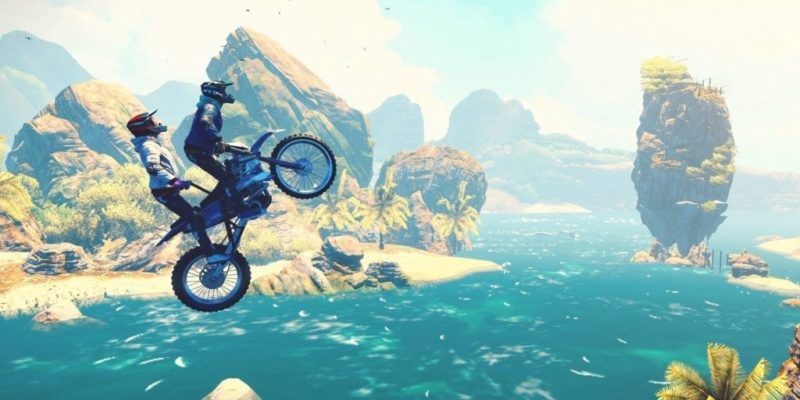 I’ve been playing Trials Rising pretty solidly over the course of this past weekend. Because of this, my hands now resemble gnarled and withered claws, bent into an unnatural shape through the frustrated clenching of a controller. I have spent the last 70-odd minutes doing a single, one-minute-long stage, over and over again, often restarting within five seconds. I’m filled with simultaneous admiration and loathing for the development team.

I love/hate this game. 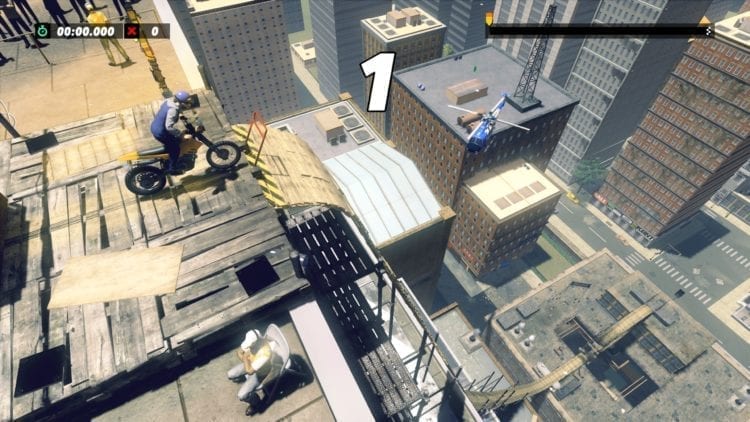 Well, that’s not a daunting start at all.

Fair warning in that I haven’t properly played a Trials game since… maybe Evolution. Possibly earlier still. As such, Trials Rising felt fresh to me. I hadn’t spent hours with Fusion or Trials of the Blood Dragon, so I’m about as far from burned out on the series as can be. If you’re the sort of person who can zero-fault every track in Trials Fusion, this review probably won’t be of much use to you.

If you’re a newcomer, then hello! As a series, Trials is deceptively simple: you ride a trials bike through a course and try to make it to the end as quickly as possible. You can lean forward or backward on your bike, accelerate, or slam on the brakes. That’s it.

This gets tricky because physics are involved. And also distant jumps onto steep inclines, massive pits, explosives, moving platforms, and all sorts of other things. Suddenly, those “simple” controls mean that you need to carefully and accurately shift your body weight on the bike and apply just enough acceleration, at just the right moment, to bunny hop over a landmine and land on an incline without sliding backward and exploding.

Helping You Rise To The Challenge 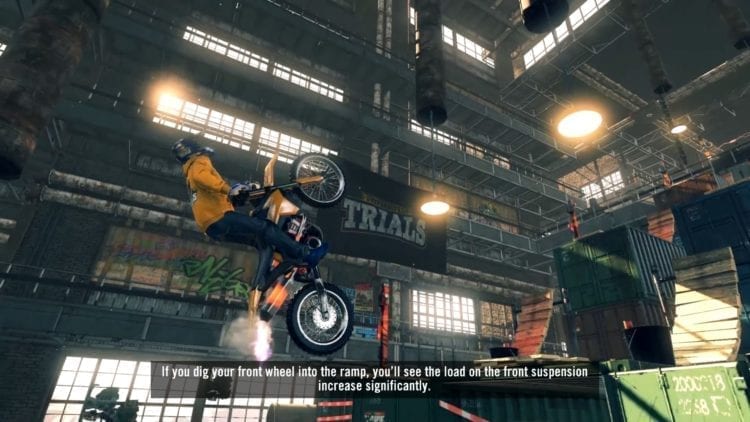 I kind of wish my physics lessons in school were like this.

As such, it’s one of those easy-to-learn/hard-to-master games. While you’ve only really got four buttons, every single one of those controls is absolutely imperative, and so is how hard you press it. (Yes, you can play with keyboard, and Trials Rising appears to compensate for this somewhat. I wouldn’t recommend it, though: analog controls are definitely the way to go for precision.) Trials Rising doesn’t, thankfully, drop you in at the deep end.

The first load of courses are simple enough and gradually introduce you to the basic mechanics, and an unlockable series of interactive tutorials – designed and narrated by Professor FatShady of the University of Trials – get you up to speed with how everything works. And by “unlockable”, I mean you pretty much get one for each major set of tracks you unlock, so you’ll only be accessing the really complicated ones after dozens of hours. This is probably for the best unless you want to hear about how leaning can adjust the potential energy stored in your rear suspension within five minutes of starting the game. It’s also very generous with checkpoints, so even if you’re inching towards the finish line, you’ll make it eventually.

All of this is a fairly long-winded way of saying: yes, this is actually really accessible. Trials is a series full of sadistic levels that require precision movement, but Trials Rising has an entire slew of tracks that are playable before it gets to that point, as well as a robust tutorial to help out when you get there. Bizarrely, I want to talk more about the tutorial because I really like it, but let’s just say it’s good and leave it there. 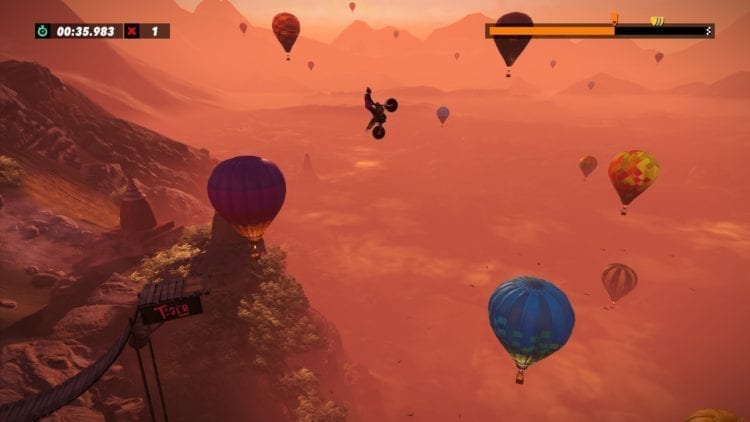 Really, it’s not all grimy warehouses and industrial estates. Some of the vistas and levels are spectacular.

Instead, let’s talk about the tracks themselves. Each course – set in a different, and usually archetypal, section of the globe – is a devilish obstacle course with set pieces that render them entirely distinct. Hollywood has you crashing through a movie set, pulling wheelies on exploding cars and smashing through the glass of a bank door. Myanmar has you bouncing along platforms suspended in the air by balloons. Venice Beach brings back memories of Tony Hawk’s Pro Skater 2, with half-pipes everywhere. There’s a level on a moving train. Almost every level is a visual treat in its own way, using flair as much as level design to differentiate itself from the rest. This is particularly impressive because there are, I think, around 100 of the things.

Simply beating the levels (or even getting a gold ranking) isn’t your only goal, though. Sponsors offer limitations and challenges, with bonuses for completion. Like, say, get a bronze score on a level… but also wheelie for 15 meters and do five backflips. Without falling off once. Being a Ubisoft game, I’m not even remotely surprised that Trials Rising has dozens of optional objectives popping up all the time to keep you occupied.

By and large, you’re free to progress how you want. You get experience and in-game cash for beating levels and sponsor challenges; leveling up grants you access to new tracks and (groan) a loot crate. If you want to level up to the next set of tracks by grinding out Scotland over and over and over again, you can. 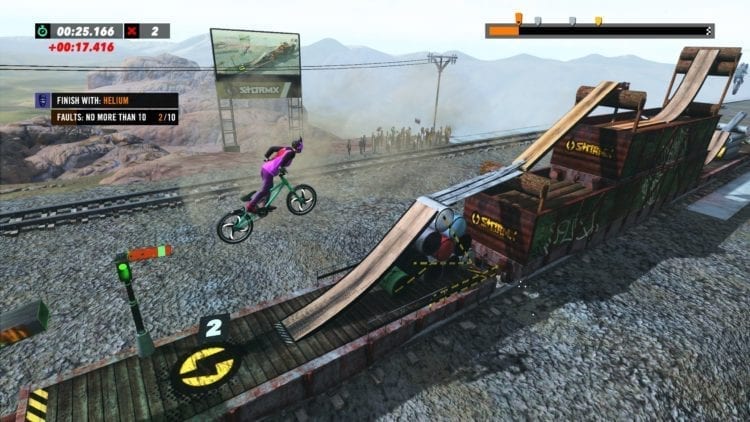 Alas, Trials Rising kinda discourages you from doing this, and that’s one of the areas I’m not so keen on. Progress is extremely nippy for the first half of the game, and you can unlock a few dozen tracks very quickly. Once you start approaching the pro leagues, though, you either need to beat some of the extremely tricky sponsor challenges to get the levels you need, or you do indeed need to grind. A lot.

As an example: at one point, I needed 10,000 experience to unlock the next set of tracks, having already beaten every available track and getting gold on most of them. Replaying a beaten track would give me 100. Going and beating some of the simpler challenges – which might still take 10 minutes of attempts – might only be worth 300. The difficult challenges, like the one in the intro that took me 70 minutes? Those were worth 5,000.

Bizarrely, this wasn’t really a skill-based gateway, either. It wasn’t a case of “If you can’t beat this challenge, the next levels will destroy you.” The next set of courses were indeed tricky, but perfectly doable. Progression, then, is more than a little imbalanced. I could bang my head against a frustrating brick wall or repeat stuff I already knew how to do, in order to get access to more stuff I was capable of doing. 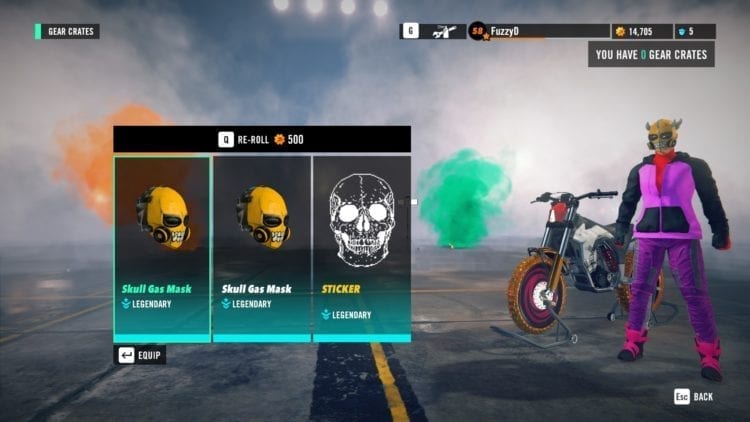 I’m not going to lie: this was quite the fortunate drop.

And then we have the loot crates, which… exist. For some reason. Every time you gain a level, you get one of these, and certain challenges reward you with more. These contain little cosmetic bits and bobs that have no impact on gameplay: cosmetics for your rider and bikes, or decals you can slap on things to customize them. You can also buy these cosmetics with the in-game currency, or you can sell duplicates for in-game currency. A minor issue here is that said currency is also used to buy two bonus bikes, which unlock their own sponsor and set of challenges. So, there is a mild gameplay impact in that if you get a bunch of legendary drops, you can sell them for faster access.

I’m also not overly keen on the music, which is really quite repetitious (especially in marathon sessions) but that’s a pretty minor complaint, especially on PC. Lower the volume and slap on the music of your choice.

In the grand scheme of things, these are fairly minor niggles in what’s otherwise a beautiful and full-to-bursting package. There are online leaderboards and ghosts to race against. You can play bizarre skill games, like bailing out and trying to bounce off exploding barrels to travel as far as you can. There are secrets tucked away in the levels and a hilarious co-op mode on a tandem bike, which I’ve barely touched.

There’s also a full-fledged track editor (which is complicated and not particularly well documented, but I’m sure we’ll see phenomenal levels before long, as I’m pretty sure every level in the game could be built with this – swooping camera angles and setpieces included). Said track editor even has loads of assets from every other Trials game, so we may soon see some levels from previous games rebuilt here. 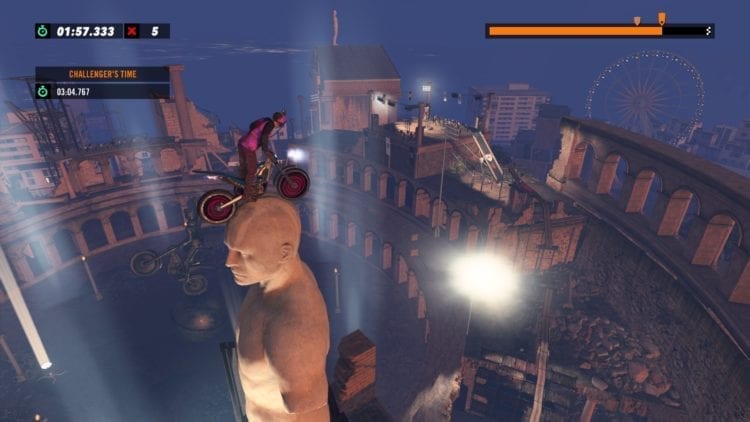 Assassin’s Creed might let you climb statues, but Trials Rising lets you drive over them. Clear winner.

Trials Rising is a masterpiece of funstration. While a lot of the fluff surrounding the riding weakens the experience, the core game is absolutely fantastic. It’s wonderfully compelling in the just-one-more-go sense; every level offers something either visually or mechanically impressive. And it’s the sort of thing that you really do get better at as you play. When you start, cresting a ramp will prove tricky. After a dozen hours, you’ll be wondering how you ever found that difficult as you ride – just barely in control – across a moving platform, down a ramp, backflip over a minefield, and then race across the finish line.

And really, there’s little more satisfying than the feeling of genuine improvement. Few games do it better than Trials Rising. And now, if you’ll excuse me, I’m off to bang my head against another difficult challenge and make my hands hate me even more.

An extraordinarily solid mix of racing, platforming, and puzzling your way through stunning and devilish obstacle courses, only let down by the fluff surrounding the core experience.

Week In PC Game Releases: Rallying And Rising Towards The End Of February