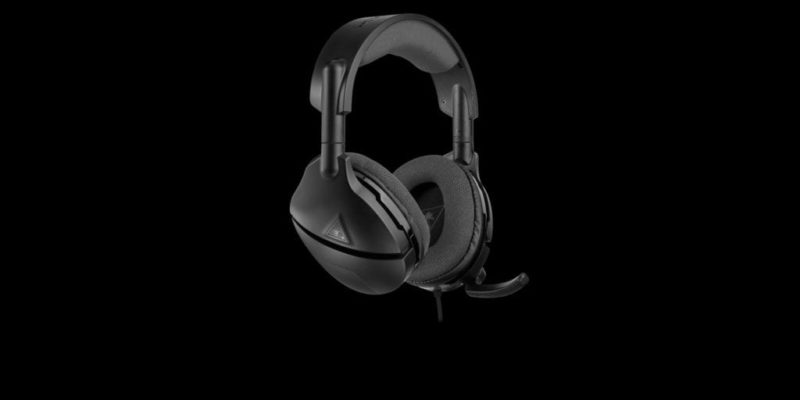 It’s worth noting at the very beginning of this review of Turtle Beach’s Atlas Three headset that I’m not an audiophile. I cannot talk in great detail about frequency responses or the importance of speaker sizes or any of that. I’m the sort of person who plugs in headphones and goes “Ooh, that sounds a bit good” or “Ow, these hurt my head.” If you’re looking for an in-depth article discussing neodymium magnets, aptX against AAC, and all sorts of other things I don’t understand, then this isn’t for you. And yes, I’m aware at least one of those things is probably totally inappropriate.

Let’s start by having a look at the official specs, though. (Which, obviously, I don’t understand.) 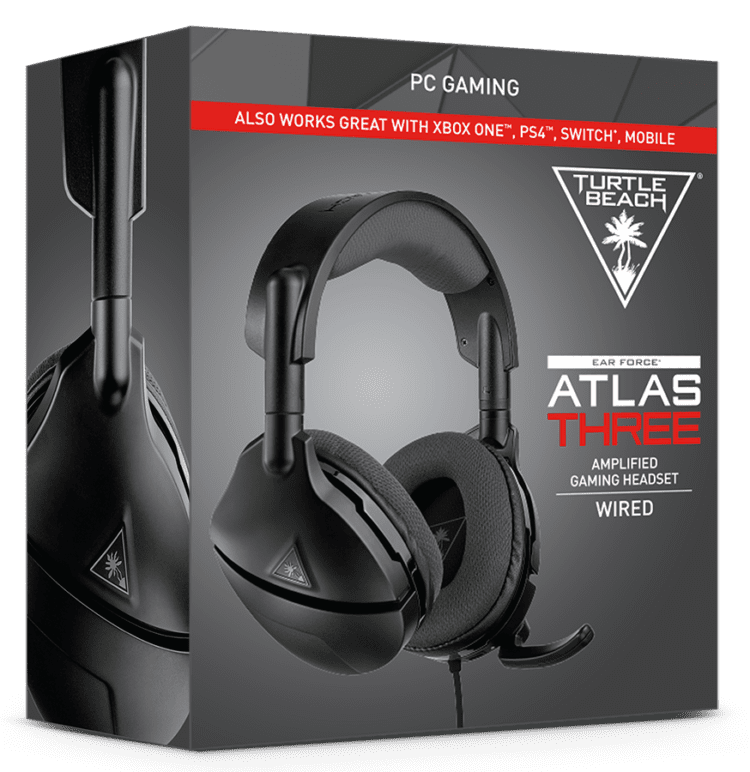 What Are The Specs?

According to the official spec sheet:

What’s In The Box?

What Does That Mean?

Well, for starters, there’s no USB for audio. The 3.5mm jack – which is to say, the usual “headphones” plug you’ll have in devices like your phone or gamepads or whatever – is the only way of plugging this into your device of choice. This might be an instant turn-off for some; I know a few people who have some rather wonky headphone/mic inputs in their PCs. The upside? You can plug the Atlas Three into basically anything that supports headphones. Your phone, your PS4 controller, your ancient cassette player; whatever.

And yes, the Micro USB charging cable means that despite these being wired headphones, they do have an internal battery. This isn’t because of noise cancellation – there’s no active noise cancellation in these (which, as far as I can understand it, pumps out a signal that cancels out ambient noise). It’s because of other strange magicks that I don’t understand.

From what a much, much smarter person than me said, it’s because the headphones don’t take the audio directly from your sound card, and instead interpret it in their own way. They amplify it and deal with it themselves, and this requires an internal battery. There. Now I can pretend to understand headphones. I am smart! Or at least capable of pretending to be.

The battery life appears to be very, very good. It took about a week of pretty regular use to drain them to zero, and somewhere between 4-8 hours of charging to get them back up to full (I went to sleep), so they rarely drop out in the middle of a frantic gaming session. 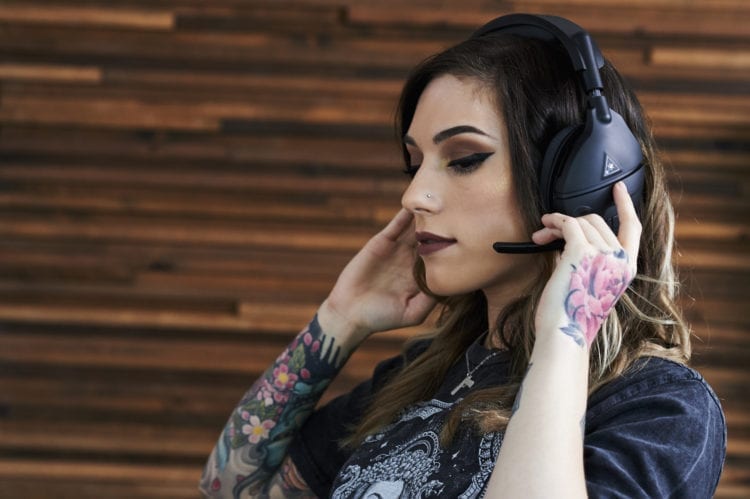 This isn’t actually me. Just thought I should point that out.

But How Comfortable Are They?

One of my usual problems with headsets is that I find most of them tremendously uncomfortable. I have a Razer headset that I bought a few years ago, which has remained largely untouched because its tight headband and on-ear positioning would hurt my head after even a short period of use.

This isn’t a problem I’ve had with the Atlas Three. The earphones themselves are over-ear, which is far more comfortable for me, and the headband is cushioned pretty well. There’s still some tightness, but for the most part, any ache I have is with the lower part of the ear cups pushing into my upper jaw.

That’s not as bad as it sounds. The Atlas Three has actually largely replaced my use of speakers, and normally I only use headsets of any sort if I’m streaming, recording, or trying not to disturb anyone else. So in terms of comfort, I’m almost entirely satisfied. I just make occasional minor adjustments.

The cables are also relatively long when you factor in the PC splitter. The cable coming out of the headset itself is probably around 130cm, with another 130cm or so coming from the PC splitter (just over 4 feet). It’s not nearly enough to, say, plug into your TV and sit across the room, but it’s fine for the audio outputs on the front of my desktop computer. Additionally, the extra length from the PC splitter makes it easy enough to stand up, take a couple of steps away from the PC, and play Rocksmith with a bass guitar.

The build quality is solid – plastic reinforced with and structured around metal – but it’s also a little hard to judge after a week. Maybe the flip-down mic will become loose at some point? Maybe the cables will stop working, or the connections are weak? It’s possible, but I don’t think so. They have a really good “feel” in terms of build quality.

One more thing to note is that the Atlas Three features the “ProSpecs Glasses Relief System”, which basically means that they’re designed to be comfortable with glasses. Essentially, there are two bits of foam in the ear cushions, with softer foam in the section that rests against the glasses. The idea is that this’ll make them a comfortable headset for those who wear glasses. I am not one of these people, but two others I had try it out are, and – while talking about comfort – they never complained about glasses with this headset. It’s a small sample size, but these people at least seemed fine wearing both. 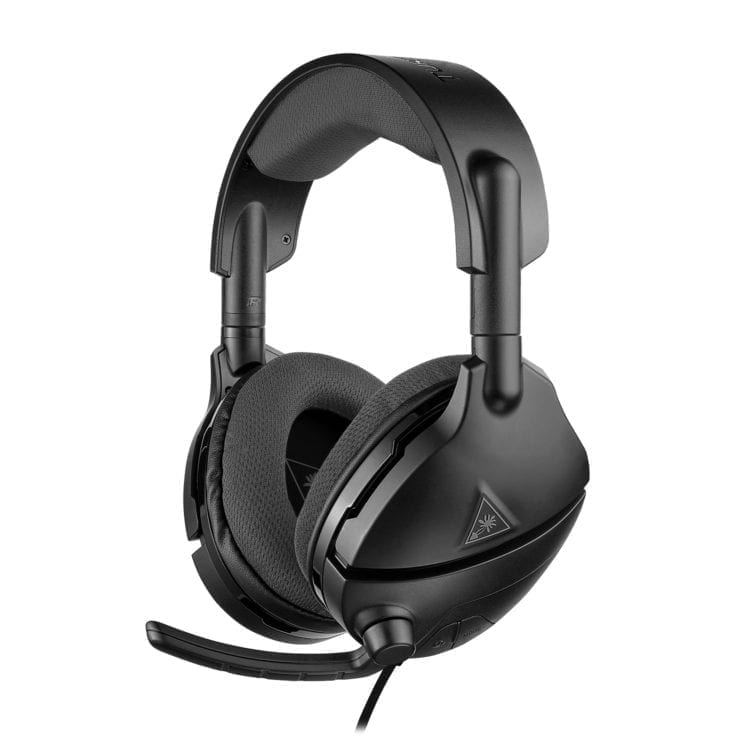 That’s with the mic out. It rotates upwards and clicks into place on the left cup, if you’re not using it, and is only activated when you flip it down.

How Do They Sound?

Of course, comfort matters very, very little if the audio quality is crap. Happily, this isn’t the case.

The emphasis seems to be on bass and vocals more than anything, which probably isn’t too surprising for a gaming headset. Both of these are very, very good: the bass is solid and thumping, and vocals are crisp and clear. Treble is a little more lacking, but that’s not a huge problem for gaming. It’s noticeable when listening to certain bits of music, but by and large, the sound quality is really rather good indeed.

There’s a Mode switch on the side of the headphones which lets you alternate between three presets – default, Treble Boost, and Vocal Boost. I… haven’t been able to spot much of a difference between the three, if I’m being perfectly honest. I’ve switched between the three trying to find differences without much success, and have wound up unintentionally leaving it on random settings without noticing.

The other big feature is support for Windows Sonic for Headphones, Microsoft’s virtual surround sound solution. How well this works tends to vary from game to game, but I’ve largely had superb experiences with Rainbow 6: Siege. It’s not deserving of anything so hyperbolic as BEING IN THE GAME, and it took some getting used to, but I found myself paying an awful lot more attention to the sound of soft footsteps than ever before. End-of-round moments, with footsteps echoing around me and the “low time” noise thrumming in my ears, were even more tense than usual.

With other games, it’s not quite as amazing. When playing HellSign, for instance, the scuttling of enemy critters didn’t seem to be directional at all. On the other hand, Hitman 2‘s directional audio worked nicely for ambient conversations – although the “fixed locations” of some audio bites made some setpieces feel a bit odd when I wandered around in the middle of them.

I’ll also note that I needed to adjust the audio balance slightly, but that’s likely a personal thing – my left ear may be more sensitive than my right. 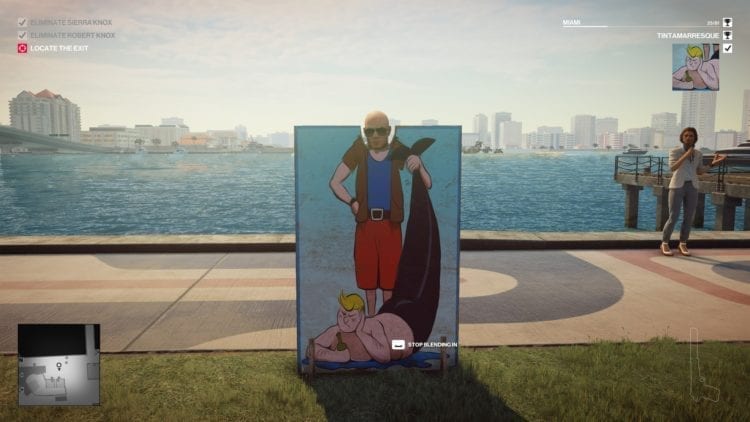 The audio quality is good enough that you can hear 47’s disapproval at being made to do this just by looking at the picture.

Passable. There’s neat functionality here: it’s actually tucked away to the side of the left earpiece, just above the volume controls for both the headphones and the mic, and you rotate it down to activate it.

And yes, I did say “volume controls for both the headphones and the mic.” You can choose to have your own voice – and any ambient noise – pumped into your headset, so that you can make sure you’re not deafening everybody you’re playing with.

Rather than describe it, it’s probably best to just give you a sample recorded via a very poorly set up Blue Snowball mic, and the Atlas Three. Here’s the Atlas Three, and here’s the Snowball.

So, not bad. Definitely good enough for online communication, though not quite crystal clear; there’s more of an audible hiss with the Atlas Three, while the Snowball is picking up the hum of my computer fan. That was with no tweaking in Audacity and no special mic setups to minimize background noise. That’s basically pure, unfiltered audio, without any clean-up. So yep: it’s fine for casual use. If you want to do streaming or YouTube videos, you’ll likely need a proper mic, but that shouldn’t come as a surprise.

At an RRP of $69.99 USD I’d say the Atlas Three is a mid-range headset, and… well, it’s pretty damn good. It’s comfortable, it has clear and impressive sounds for most situations, and the mic is more than acceptable for casual conversation or gaming use. You’re not getting the audio quality you would with, say, high-end Sennheisers, but they’re a damn sight better than most other headsets I’ve tried.

If you’re in the market for a new headset and you have a bit of budget to spend, then I’m as comfortable recommending the Atlas Three as I am wearing them. For the most part: very.