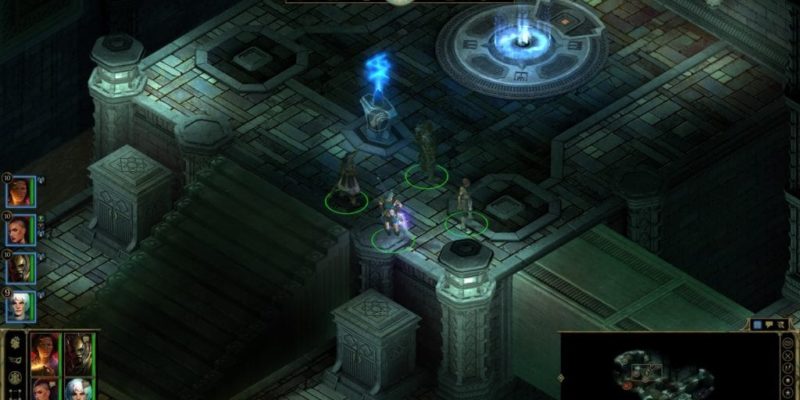 It’s a conundrum for all RPGs of length; where and how to incorporate an expansion? Most either resolve their main tale in way that makes it difficult to just slap a bit more story on the end, or leave the door wide open to a sequel of equally epic scope. Tyranny’s narrative does the latter, so as with Obsidian’s Pillars of Eternity before it, the Bastard’s Wound expansion is integrated into the main story as a new area.

Unlike The White March, this is a single release, not a two-parter. It’s slightly less isolated than The White March too. That expansion’s areas were almost completely self-contained, while some of the quests in Bastard’s Wound will send you off to new (albeit quite small) locations in the Tiers. As you may be aware, the DLC also introduces new companion quests for Barik, Verse, and Lantry. These take you further afield as well, to areas both familiar and fresh. 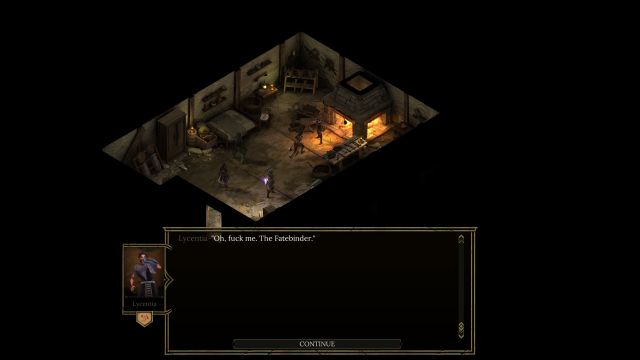 Everybody is delighted to see you.

Without spoiling too much, Barik’s quest deals with the question of removing his armour. More pointedly, it deals with the quandary of having to defy Tunon. Barik’s keen to leave his armoured prison, but his sense of honour and service to the Disfavored mean he’s none too pleased at having to apply legal semantics in order to proceed.

Verse, meanwhile, gets a lead on the person who killed her Scarlet Fury sisters. That prompts a quest that can lead her further into bloodthirsty vengeance, or bring out her better nature. Plus, you get a neat pair of gloves with Artifact properties along the way. Lantry has never been a mainstay of my Tyranny parties so I didn’t actively pursue his quest, but it involves seeking out a fellow Sage (who happens to be connected with the main settlement in Bastard’s Wound).

These companion quests are the garnish of Bastard’s Wound rather than its main dish, but they expand fairly well on the dysfunctional characters in the game. Verse’s tale felt like it ended on a rather abrupt change of heart (for me; it can end other ways), yet also included some well written vulnerability. And as for Barik, well, it’s always fun to poke at Barik’s dour nature. There are ample chances to do that here. 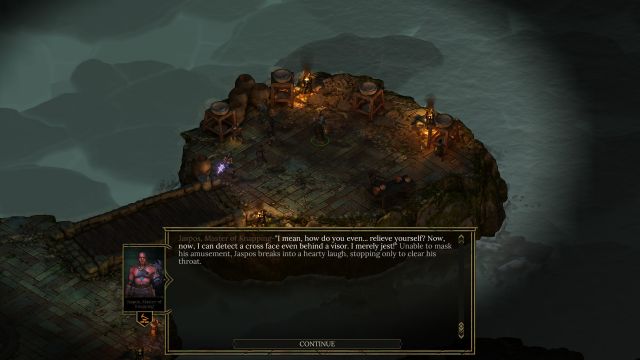 Even NPCs are clowning on Barik now.

The bulk of this expansion, however, takes place in a six map (plus one connecting map, and an outside location map) area that shares the Bastard’s Wound name. It’s a settlement hidden inside the Oldwalls (or ‘above’ as the inhabitants are eager to point out to the legally-minded Fatebinder) in which various people and stratas of society have gathered together outside Kyros’ attention. Forge-Bound, Sages, Beastmen, and others have united to maintain a community that, somewhat unambiguously, is flaunting the law of Kyros.

As the person bound to uphold that law, this presents a rather immediate dilemma. But beyond those legislative issues, all is not well in the apparently peaceful habitat. Two figureheads vie for overall power and a third, a Beastman with a cursed healing touch that inadvertently prevents the healed from sleeping, has fled deeper into the Oldwalls. Lift the surface, and you’ll find that everything has gone a bit The Ones Who Walk Away from Omelas.

This is typically deft plotting from Obsidian, particularly with regard to Wagstaff and Jaspos, the would-be leaders of Bastard’s Wound. The two men appear capable, though brusque, at first, but delving into the secrets of the community reveal quite a different picture. I’m also beginning to wonder if someone at the studio has an interest in sleep disorders. The protagonist’s lack of sleep was a (minor) factor in Pillars of Eternity, and the exploration of a non-fatal yet clearly torturous state of sleeplessness here suggests further inspiration. It’s an absorbing area to draw from, so I’m not complaining. 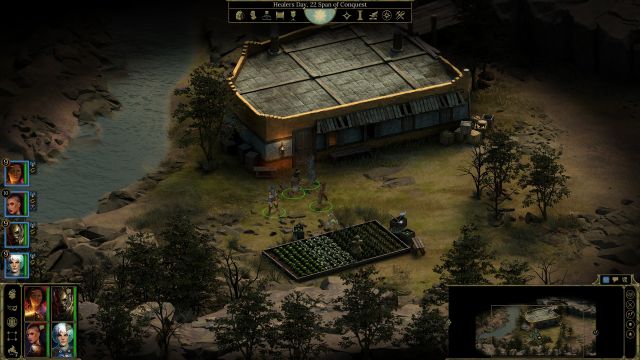 There’s not much sunlight in Bastard’s Wound, but sometimes you visit the outdoors.

Although the focus is on Barik, Lantry and Verse in terms of special companion quests, the other companions look to have received attention for the DLC too. I brought Eb along, and her direct connection to someone in Bastard’s Wound resulted in several unique lines and even a specific Artifact. She also had plenty to say during studies of Oldwall murals and intrigues. While I can’t directly account for everybody else, I’d strongly suspect that Kills-in-Shadow would have things to say about the Beastman-specific parts of the DLC.

Beneath the main settlement map, dialogue and characters mostly step aside for combat. The lower three maps are the dungeon-crawling element of Bastard’s Wound, which incorporate very familiar aspects from the original game. Those loveable Wall-dwelling Bane are back, accompanied here by some of the Sleepless. That combination of Bane and mixed character class opposition makes you think a little harder about how to deal with the conflicts, as there’s a broader range of skills to counter. But it’s not a dramatic change, and it’s a massive shame there aren’t any significant new enemy encounters. I’m really not convinced people want to return to Tyranny just to fight more Bane.

The dungeon itself is lightly puzzle-centric, featuring more colourful keystones and totems to activate. This time, there’s a slight twist. You can activate the totems at a distance, so you need to scout around a bit to spot them across gaps or down potential staircases.

Or, if you’re me, you can get extremely confused because you’ve accidentally activated two quest-lines at once and are now trapped in a progress-ending loop where the Bastard’s Wound scripting is going haywire. That’s why this review is being published a little later than planned, and why that particular bug was not in the DLC at launch. I got stuck with it so you didn’t have to! 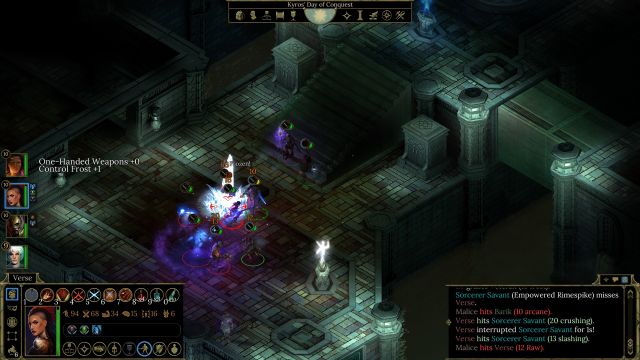 It’s the Bane. You fight them like you always fight the Bane.

Without playing through the entire game again (I picked up an old save in Act 2 which is where Bastard’s Wound becomes an option) it’s difficult to know precisely how this expansion will feel as part of the narrative whole. I get the sense it may impact the flow and pacing a little, as you’ll basically be taking a six or seven hour diversion from what are framed as more pressing matters. But that diversion does provide a bit more insight into the Oldwalls and the history of the Tiers, and a set of self-contained moral dilemmas that are engaging in their own right. The culmination is worth it too, though there are plenty of Bane between you and it.

Those who come across Bastard’s Wound as new players, people who’ve perhaps picked up the game and DLC as a bundle, should find it to be of similar quality to the other distinct areas in the Tiers. It was also released alongside a free update that expands the ending with a new path of alignment, which people coming to the game late will benefit from as well. Judged in a vacuum though, especially taking the $15 price tag into account, this expansion feels a bit too conservative. Coming to it as a new player, the similarity to the rest of the game will be a boon. For someone returning just for the DLC, the familiarity is welcome, but tinged with some disappointment.

The quests (both self-contained and the companion extras) are up to Tyranny's written standards, but in terms of combat and broader consequences Bastard's Wound doesn’t make a massive impression. It’s comfortably familiar, just not essential.