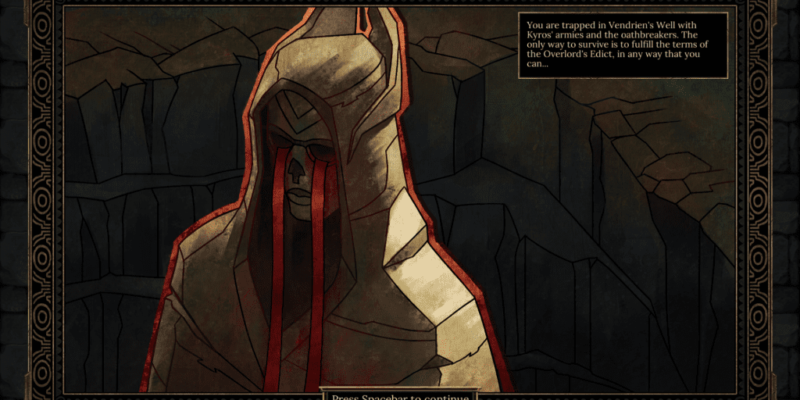 If you’ve not played Pillars of Eternity, or haven’t touched a more traditional isometric-ish RPG before, then Tyranny’s combat system may hold some mystery. These are the basics that should help you triumph on Normal difficulty, and give you a solid grounding for stepping up to higher levels of play if desired.

Our full Tyranny review is still in progress (contrary to early reports, this game is quite long), and will be up on the site in the next few days.

Primarily, the early moves Obsidian’s more recent real-time-with-pause combat systems are about smart positioning. Tyranny has an ‘engagement’ system that means once a couple of parties are in combat, they’re basically locked that way until one dies or tries to break away (suffering a ‘disengagement’ penalty and some free hits).

Make use of custom formations (the square with dots for corners to the left of your party portraits will lead you there) once you have three or four members in your party. That way, you can mostly make sure that your front line are the tougher, ‘tankier’ members of your team (Barik, Kills-in-Shadows, Verse if she’s been equipped for it).

Also, consider visiting the menu options and choosing a few auto-pause options. Having the game pause by default whenever you get into combat is a very helpful way to give you time to consider the layout of your opponents. Make frequent use of pausing in combat too, in order to suss out where the most danger and damage is coming from, and how to put a stop to it. 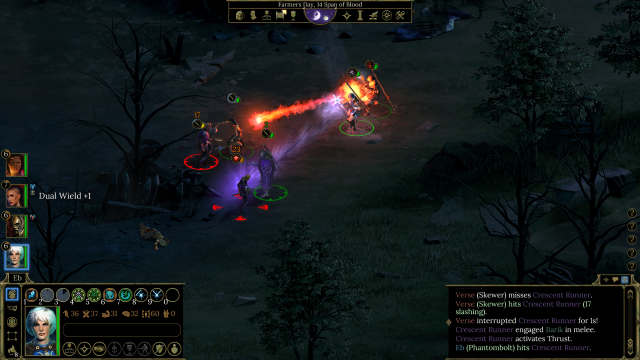 Blockers at the front, spell blasting from the back. Easy when it’s 4v2, mind you.

More often than not you’ll be outnumbered by one or two guys. Get your heavy-weights to try to hold a front line of sorts by engaging anybody who rushes you (they’ll also probably attract the attention of any nearby ranged attackers). Try to keep your own ranged and spellcasting characters out of melee engagements as much as possible. Unless they can hold their own in hand-to-hand, they need to be dealing damage or buffing your other characters. Until you have the ability to create healing spells of your own, it’s a good idea to keep Lantry around in your party (he’ll likely be the third character you recruit) to make use of his healing spells.

Be careful when casting spells or using abilities to note the range indicators. A little pair of footsteps on the spell-casting UI will show if you need to move before casting/firing, and you don’t want to accidentally run yourself into an unwanted engagement.

Your companions can be given rough AI templates to follow by right-clicking on the little head with the gear sticking out to the left of the companion portraits (and left clicking to switch it on/off). The AI can be a little … inconsistent, so I’d actually recommend going all-in on learning to micro-manage your whole party for best results. If you want to go with the AI, I’ve found that a fairly conservative approach (setting it to Defend Party and Default behaviour rather than a special character template) tends to help prevent the AI from doing anything too weird. That set-up can work pretty well for a character you just want to send into battle to do their own thing and soak up attacks for a bit. 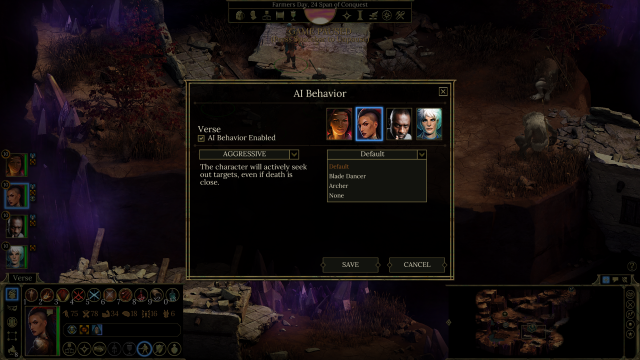 I generally wanted Verse to charge at everything, so Aggressive worked okay.

You can also over-ride AI commands with your own, so if you want to leave characters on a basic set of AI instructions but intervene for crucial decisions that can work fairly well.

Types of Damage vs Types of Defense

Once you get more familiar with how Tyranny’s systems work, and with certain enemy types, you’ll quickly get better at identifying the most immediate threats to your group. This will differ depending on what your character is and who is in your party, but it’s always important to know who you should focus on early and their potential weaknesses.

All weapons (melee, ranged, magic) deal different types of damage, but the important thing to note is what specific Defense they target. There are five types: Dodge, Parry, Endurance, Will and Magic. You can see what stats a given foe has in each area by hovering the cursor over them (and right-clicking to lock it to them temporarily, if you wish).

Parry and Dodge are often the main pair here. Most melee attacks (maybe all, aside from fringe cases) will target Parry. Most ranged and magic attacks will target Dodge. A few magic attacks will target Will (usually the ‘screw with your brain’ type). Endurance is largely for resisting status effects like being stunned. Magic defense, despite the name, doesn’t unformly defend against magic; it defends against a specific type of magic attack from one enemy type called the Bane. 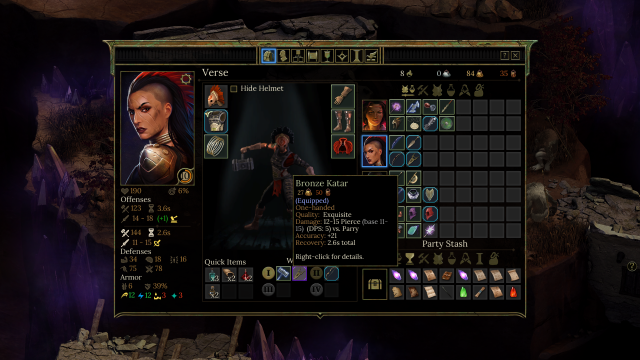 Hovering over a weapon in the character sheet will tell you what type of damage it does and so on.

You also need to keep armour penetration in mind. Your melee attacks may be hitting an enemy with low Parry, but if they’re heavily armoured and your weapons can’t breach that you won’t be doing much damage.

Broadly speaking, co-ordinate your attacks according to enemy weakness where possible. Launch your spells at people with low Dodge (or Will where applicable), and try to attack lower Parry foes with your melee crew. Look for specific weaknesses (some enemies will be weak to fire, or frost) and exploit them. Or apply status effects like Stun, Poisoning or Bleed to create weakness.

Remember that Tyranny gives your characters powerful companion combo attacks in some cases. Eb’s ‘Terratus’ Embrace’ takes a fair while to cast, but it’s a huge area of effect attack that not only targets multiple enemies but heals your party at the same time. In a less dramatic way, Barik’s ‘Iron Tolling’ can basically reduce a target’s Dodge and Parry defenses to zero for fifteen seconds. Use your individual character’s unique abilities as much as possible too (assuming they’re appropriate for the moment), as they tend to be more powerful than a basic attack.

If you want to know what kind of damage you are (or aren’t) doing, have a look at the combat log that’ll be running on the bottom right hand side of the screen during fights. Your characters will also talk to you if they’re struggling or unable to penetrate armour (“This weapon is useless!” and the like).

You won’t necessarily need these if you’re playing on Normal difficulty or below, but they’re worth using and can tip a fight your way. Keep an eye on your inventory stash for consumables that can add poison to attacks, boost armour penetration, and various other buffs useful for specific circumstances. Stick these in the ‘quick items’ list of your characters, to be brought out when required. It’s always a good idea to have a stack of healing potions on hand too, in case your healing spell(s) are on cooldown.

By following these guidelines you should be able to handle anything Tyranny tosses at you, and develop your own tactics around the character and party you’ve assembled. Go forth, in Kyros’ name!

Tyranny – How to Add Custom Portraits To Your Game