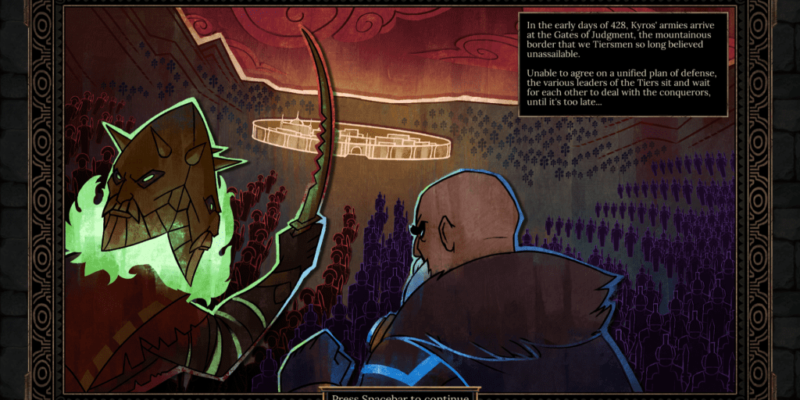 Obsidian’s first RPG post-Pillars of Eternity finds them refining many of the systems created for that title, while also cutting loose the more traditional remit that came with a nostalgic Kickstarter. Tyranny places you in the role of Fatebinder, a powerful judicial bureaucrat in a realm almost entirely subservient to the law of Overlord Kyros (a deific figure so remote and powerful that the people of the land can no longer decide whether Kyros is male, female, or at this point entirely beyond any sort of gender conventions).

Where Pillars of Eternity went for the 80 Hour Epic Hero’s Journey approach (albeit with Obsidian’s own original twists and some smart thematic overtones about Colonialism), Tyranny aims to be a more replayable affair. It still comes in at the 20-30 hour mark (depending on the level of difficulty and how fast you can read – I played on Normal), and deals with matters just as broad and realm-defining in scope as Pillars; but the construction is such that a second play-through will find you working with different political alliances, through different missions. 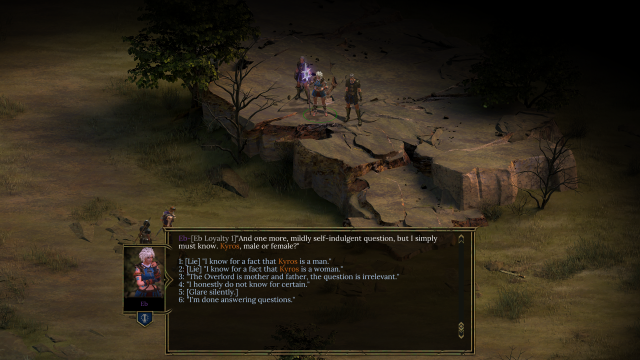 Kyros is Father-Mother from Zeno Clash, end of discussion.

If you’re anything like me, the prospect of an Obsidian RPG with promises of replayability instantly brings Alpha Protocol to mind. That game had its problems, but remains almost unparalleled in the level of detail and reactivity to choice it offered on multiple play-throughs. I’m not sure Tyranny can ever be heralded on quite that level, but it’s game where choices made in the game’s prologue and early Acts absolutely resonate throughout later periods, and help shape the alliances and interactions your character has within the world.

As often proves to be the case with Obsidian games, one of the player’s earliest challenges will be getting beyond the extensive character creation screens without guessing and second-guessing themselves into rolling up a new ‘build’ every twenty minutes. Though the facial customisation options are somewhat limited (fair for a game where you don’t see any close ups of faces), there are a wealth of talents, backgrounds, and pseudo-classes from which to choose; and extra portraits can be added by hand. Tyranny doesn’t really lock your character’s combat preferences in any way (someone who starts as a mage can quite easily pick up a two-handed weapon instead, as long as they don’t leave the decision too long), but your decisions about back-story certainly crop up in dialogue.

More importantly, the choices you make during the game’s optional, and largely text-based Conquest prologue, have profound consequences for the Acts beyond. In this section, you’re essentially sketching out how your character performed during Kyros’ early campaign to conquer the Southern Tiers (the area of the world where Tyranny is based). The two main factional armies, the fascistic Disfavored and the chaotically anarchic Scarlet Chorus (as well as the local factions and forces) will form their early opinions of you from these actions. But they’ll also resonate much further. Even in the late stages of Act 3, I encountered characters accusing my present actions of being hypocritical in light of how I’d behaved during the war’s early years. This is largely for cosmetic purposes, but it’s welcome continuity. 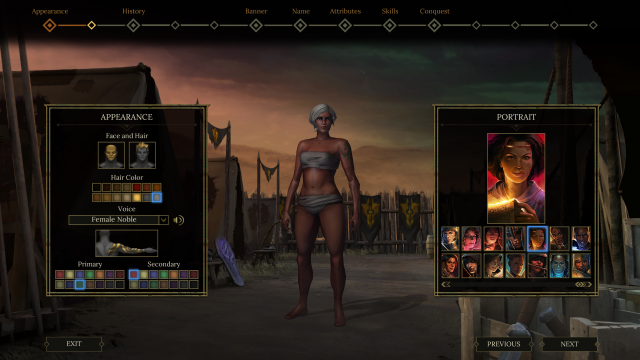 One of Tyranny’s most refreshing breaks with RPG convention is its decision to cast you as somebody with real authority right from the start of the game. As a Fatebinder, you can justifiably make legal rulings on pretty much any dispute you stumble across, by which the aggrieved parties must abide. Powerful factional leaders (Archons) technically remain out of your control, but the first 6-8 hours of the game involve you putting the wind up even these squabbling generals. As you get further afield into deeper Tiers territory people will sometimes begin to feel more confident questioning your jurisdiction (which in itself is quite refreshing), but your role as legal authoritarian remains important throughout.

Without ruining anything specific here, I can confirm that Act 3 had some very satisfying pay-offs to the accumulation of decisions I’d made as Fatebinder. That strong conclusion helped to retrospectively legitimise some of the flabbier points of the journey. Act 2 is dramatically longer than its neighbours and, while it had memorable peaks, definitely felt over-extended; particularly during some less than thrilling dungeon crawling exercises.

The game can also struggle to maintain internal consistency with all the choices you’ve been making. It’s a title constructed from a lot of building bricks, so if you do things in an unusual order or take a series of steps Tyranny hasn’t quite fully accounted for, then you will notice oddities. Characters behaving a little strangely, or choices that you suspect should be there just not really appearing. It’s difficult to account for how rare this is, given that I’ve only played through the game once, but its also quite easy to forgive insofar as it’s a problem that stems from an ambitious level of reactivity. 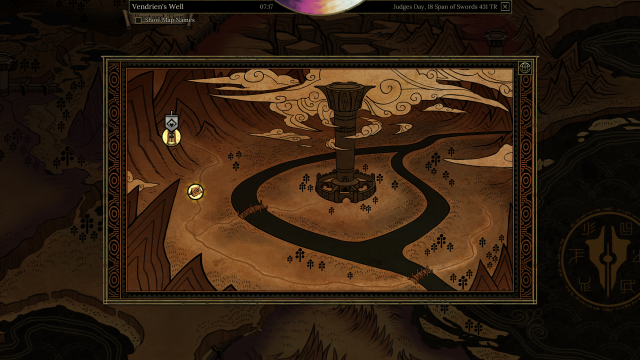 The art direction, particularly on the world maps, is terrific.

Systemically speaking, it seems like Obsidian took several of the lessons learned from Pillars of Eternity to heart and doubled down on that title’s approach to character creation and combat. The maps are less sprawling than those found in Pillars, aiding overall performance (only one dipped below 60fps, as opposed to regular visits to 30-40fps in the prior title) and keeping combat encounters a little tighter. A side-quest might see your party of four battling a couple of groups of four or five apiece in a small village or patch of wilderness, which is definitely toned down from Pillars.

Combat basics in Tyranny rest on a similar mechanic of attack type (formed from an amalgamation of stats and equipment quality) versus defense type (formed from much the same thing) but expands the feature set to include powerful companion combo abilities and a wonderfully open-ended custom spell creator. The latter takes a while to flourish, but ultimately provides mage characters with the tools to handle all kinds of different roles (and switch those roles with a whole new set of spells pretty much whenever they please). With this apparatus you can create, for example, a far-ranging illusory pit spell that’s so convincing that it not only knocks foes prone but applies bleeding damage as well.

The weaknesses present in this system are much the same as in Pillars of Eternity. You can quickly fall into a pattern of positioning and attacks that enables you to deal with whatever Tyranny throws at the party. Enemy variety in this game is fairly limited too, extending to various groups of humans (usually of a Warrior Tank, Spellcaster, Ranged Guys mix), a few humanoid beasts, and some magical ghosts. Once you’ve cracked how to handle each particular group, the precise make-up of each encounter can start to become a little bit irrelevant. In Tyranny’s favour here is the overall running time. Figuring this stuff out with five hours of game left is better than doing so with another 30-some still to go.

Issues with pathfinding and some erratic party AI behaviour haven’t really been resolved since their late introduction to Pillars either. 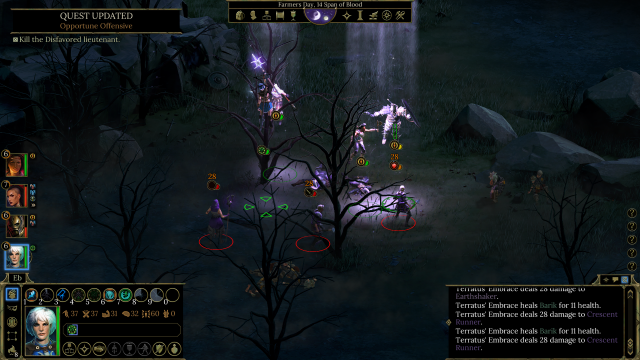 Luckily you don’t need path-finding if your spells can make you hover in the air like creepy phantom warriors.

The party Stronghold equivalent in this game has a series of defined, useful functions; from upgrading armour to researching new spells. But it suffers from the fact that the majority of its systems get fully up and running just as the game is reaching its climax. Tyranny’s ending is blatantly set up for a sequel (it resolves much of what it sets out, but leaves a door gaping open for more at the conclusion), but that’s not really a great reason for cramming a lot of the ‘home base’ upgrade mechanics into the final hours.

Unique, interesting items (which became more of a thing in Pillars post-DLC) are present in this game as Artifacts. They share a similar reputation meter to the one you hold with all factions and allies in the game, unlocking abilities as your influence in the world spreads. Where factions and individuals are concerned, either loyalty or fear can unlock (different) abilities. This is in-keeping with Tyranny’s, and Obsidian’s, general philosophy of there being no ‘trap’ choices in their RPGs, just different consequences for following opposite routes.

Oddly, despite Tyranny mining more unusual creative material, the game does still echo a couple of the main themes from Pillars. Imperial power (though this time you’re a direct agent of that power) and curious, ancient technologies loom large in the narrative. In contrast to the grim subject matter, it’s an often much funnier game than Pillars, offering plenty of opportunities for arsehole japery in the dialogue options. 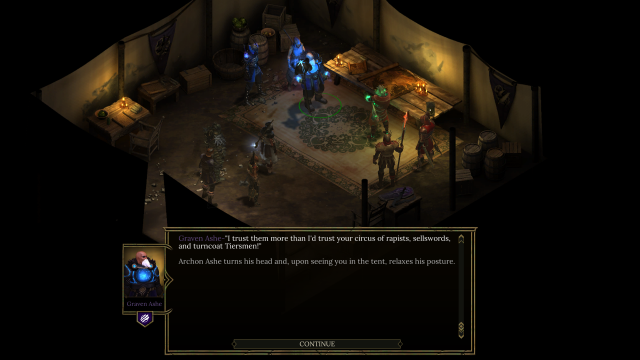 Probably best not to be a dick to these two, though. At least … not right away.

Obsidian’s much-admired writing talents are reflected most clearly in the depth of their fantasy realm, and the confidence in casting you as the evil empire’s middle-manager (even though this does drift disappointingly towards ‘one true special guy’ before too long). Moment to moment segments of writing vary in quality, as you might expect from a collaborative project, but there’s an embracing coherence to the portrayal of your unpalatable administrative duties. Companions, too, are broadly well written and diverse in tone, with a few interesting dynamics to explore if you opt to take the time to do so.

Tyranny puts Obsidian’s strengths in world creation to the fore, and allows them to stretch their creative legs into less explored areas of fantasy RPGs. There are plenty of genuinely horrendous acts to witness, but the game is nuanced enough to stay focused on the complexities of balancing the vanguard of a volatile invasion with your legal duties as a Fatebinder. The shorter length makes replays a realistic possibility, and the frame-work is in place for additional campaigns to play out in ways that are significant. After completing the game, I noted one particular Steam achievement indicating a faction path that I hadn’t even considered possible. It suffers from back-loading a few important game mechanics (and a glut of quality items) in the accelerated rush towards an abrupt conclusion, but Tyranny’s many other redeeming qualities make it another classically-informed RPG success.

Win a copies of the Order of Battle: Blitzkrieg and other expansions