Steel Mantis Games is comprised of the tag-teaming talents of Andrew Gilmour (art and animation) and Thomas Jenns (programming and design). The duo saw a rocky start to their development careers with the release of Slain! back in 2016. Slain! was a critical flop, prompting a re-release a few months later as Slain: Back from Hell to much more success. Still, despite its excellent soundtrack and visuals, Back from Hell had plenty of flaws. Three years later, Steel Mantis has returned to right the ship with their newest heavy metal-infused platformer: Valfaris. 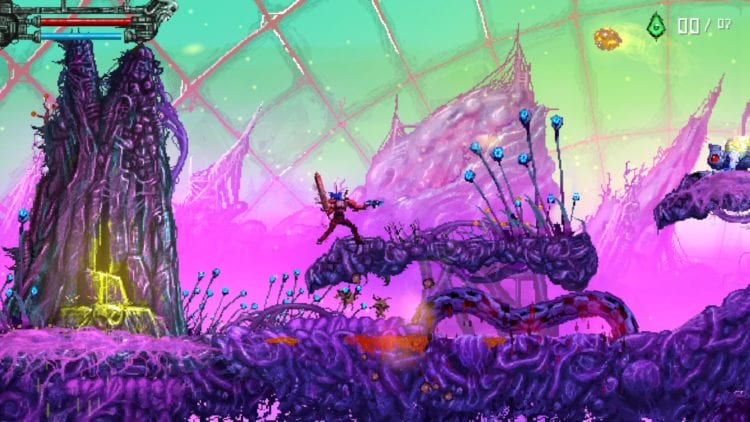 Welcome to Valfaris, home to an ever-growing dark presence which it is up to you to thwart.

Can Valfaris live up to its own epic soundtrack, and can it top the precedent set by Slain!? Either way, get ready to rip the galaxy a new wormhole.

Valfaris introduces the player to Therion and his AI assistant Hekate. Therion is a skull-rocking, head-banging, long-haired, bonafide badass who’s hell-bent on saving his home planet of Valfaris. The player soon discovers that Valfaris is ruled by Vroll, a tightfisted dictator whose reign has devolved the planet into civil war. Turns out Therion is Vroll’s son (understandable), and Therion must return to his home to uncover the truth of its doomed fate and challenge the arcane evil at its very heart. Oh yeah, and to kill his dad. 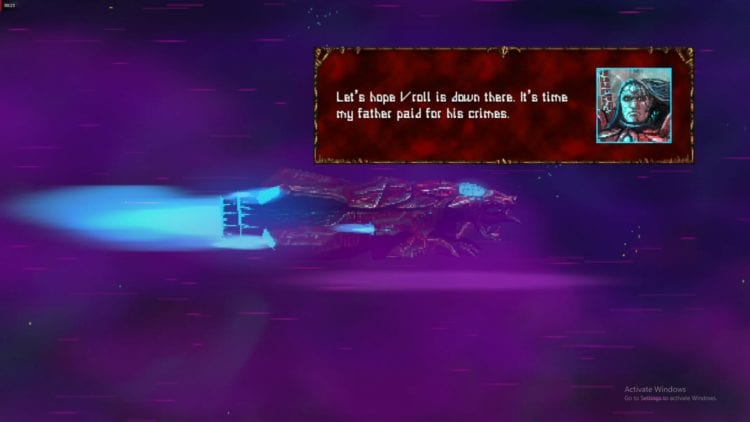 Ultimately, despite the occasional off-handed comment from Therion, the narrative of Valfaris is nothing to write home about. In fact, I’m leaving the game with way more questions than I had coming in. We never really find out what happens to Vroll, or what he did to make Therion hate him. In fact, even upon the game’s completion, we’re met with little more than a bad cliffhanger.

But then again, the story was never really meant to be the main draw of Valfaris. Like the 16-bit era that it takes influence from, Valfaris doesn’t need a gripping narrative to provide the player with motivation to explore. That motivation is instead guided by its kick-ass heavy metal soundtrack, hand-animated characters, and 16-bit vaporwave aesthetic.

Valfaris does an excellent job of paying homage to games like Castlevania: Symphony of the Night, Blackthorne, and Contra, all while feeling distinctly modern. Meeting a frame rate of 60fps even on my laptop, Valfaris is consistently smooth, responsive, and beautiful – regardless of what machine you play it on. 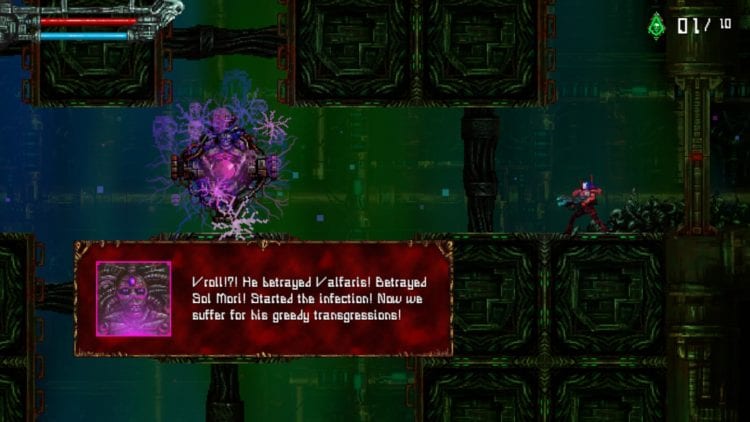 Each boss battle is preceded with a bit of banter between Therion and his opponent. Unfortunately, this method of storytelling doesn’t allow for much character progression. But then again, does it need to?

Valfaris will have you dismembering thousands of monsters along your journey, from the weird to the grotesque (and even some that are just grotesquely weird). Each enemy is hand-animated, and each boasts unique levels of creativity bolstered by distinctive fighting styles. This is a good thing, because Valfaris throws a LOT of enemies at the player. A lack of variety, then, would slow things down quite a bit. Instead, the player must constantly learn to defend against unique attacks, all of which will be used in boss battles.

Said boss battles are scattered generously along the labyrinthine tunnels of planet Valfaris, and they’re some of the strongest points of the game. These battles provide crushingly difficult challenges that punish the player for even the slightest of missteps, à la Dark Souls. Even when Steel Mantis decides to reuse a boss later in the game, they keep things interesting by completely transforming the method of defeating them. While these levels are generally the most rewarding, there were a few specific instances where a boss would launch a Call of Duty: Modern Warfare-esque “martyrdom” attack after death. These forced me to restart the entire battle on more than one occasion.

Going in hard and heavy

The major knock on Slain! and Slain: Back from Hell was their mediocre platforming, and I’m happy to say that is not an issue here. The levels of Valfaris are incredibly varied and precise, and there is a very apparent amount of polish that endures the length of the game. Certain levels have a distinct sense of verticality, requiring precise jumps on moving platforms. Others feature on-rails shooting galleries that force Therion to rely on his ranged weapons. Luckily, pinpoint hit boxes and variable parallax backgrounds keep these platforming sections fresh. They also kept my jaw glued tightly to the floor. While it may occasionally prove difficult to discern certain characters from Valfaris‘ detailed backgrounds, the game never made me feel like I had died unfairly. 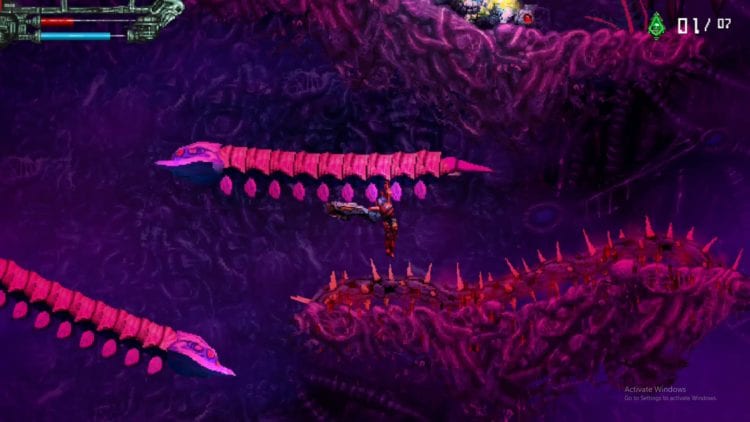 Platforming sections will keep you on the edge of your seat – like this one, which has you hang from flying worms while crushing alien skulls.

This polish persists into Valfaris‘ combat, which is pleasantly responsive and deep. Therion is well equipped with three weapon slots that correspond to different attacks: a weak ranged weapon, a powerful melee attack, and a powerful “destroyer” weapon that chews up Therion’s “power” meter. Landing melee attacks recharges the power meter, which leads to some really tense moments of nailing perfectly-timed melee attacks to charge up the destroyer weapon. Meanwhile, using the shield at the right time will stop a projectile in its tracks, and a well-timed block can briefly stun larger enemies. The culmination of each of Valfaris‘ battle mechanics results in a game whose combat rarely stagnates, especially considering its difficulty.

Yes, Valfaris is hard. Very hard, in fact. It will challenge every last drop of patience that you have. At times, you may even find your downstairs neighbors telling you to quiet down after you cuss the game out (from personal experience). On the bright side, there are plenty of checkpoints scattered throughout levels, each of which you can activate for one “resurrection token”. The more daring among you may even choose to forego paying to use a checkpoint, as hanging on to resurrection tokens will increase Therion’s maximum health. This was a fantastic addition by Steel Mantis. It forces the player to reflect on each section to consider whether they should risk clinging to their precious resurrection tokens, or if they should seek the safety of a respawn point.

Ultimately, the gameplay of Valfaris nails everything it tries to do. Its weighty, fast-paced, versatile, and just genuinely fun combat sections interweave beautifully with bright scenery and tight physics. Sure, the game pushed my patience from a difficulty standpoint at times. But it never felt like a chore, especially considering its weapon unlock system.

Therion is able to don a smorgasbord of unique load-outs that keep combat fresh and exciting. Many of these will unlock as the reward for completing a boss battle. With 19 weapons in total, this leaves plenty of room for Call of Duty-style weapon unlocks, complete with thunderous guitar riffs and Wayne’s World-esque headbanging. Check it out:

The instant dopamine release of defeating a tough boss and getting a new weapon is highly addictive. Luckily, there are plenty of pickups to find. My favorites include The Bastard, a devastating but slow flame-sword; the Embryon, a gun which launches powerful exploding “glo-balls” at enemies; and the Envoy of Destruction, a heavy cannon which fires a barrage of homing missiles all over the map.

Other weapons include a flamethrower, flaming whip, machine gun, and an energy beam. Each one has its own strengths and weaknesses. You can also upgrade weapons using “blood metal”. However, you’ll need to be very selective with your resources. Upgrades are permanent, after all, and blood metal is in short supply.

On the off chance that you finish Valfaris and think, “Well, that just wasn’t difficult enough for me,” fear not. Developer Steel Mantis is apparently also working on a New Game+ feature called “Full Metal Mode” (as if we needed any more Metal). This mode will become available upon completion of the final boss and will allow players to completely start the game over with every weapon and item they collected on their initial run. This mode also includes more aggressive enemies with more powerful attacks, as well as an additional Destroyer-class weapon exclusive to the mode.

The addition of “Full Metal Mode” will offer even more content to a runtime already teetering on 7 hours long. It definitely bolsters the game’s value for more hardcore players. This mode is coming in a free update at a date to be determined later, but its omission on launch day shouldn’t stop you from enjoying Valfaris.

Valfaris is available on Steam Oct 10.

While its crushing difficulty and bare-bones story may turn off some casual players, those who triumph through Valfaris' 7 hours of gameplay and endless boss battles will leave feeling refreshed. This is a definite must-play for both Castlevania and heavy metal fans alike.

Destiny 2: Shadowkeep – Getting to 950+ power level during week 2

By Martynas Klimas16 hours ago
Reviews