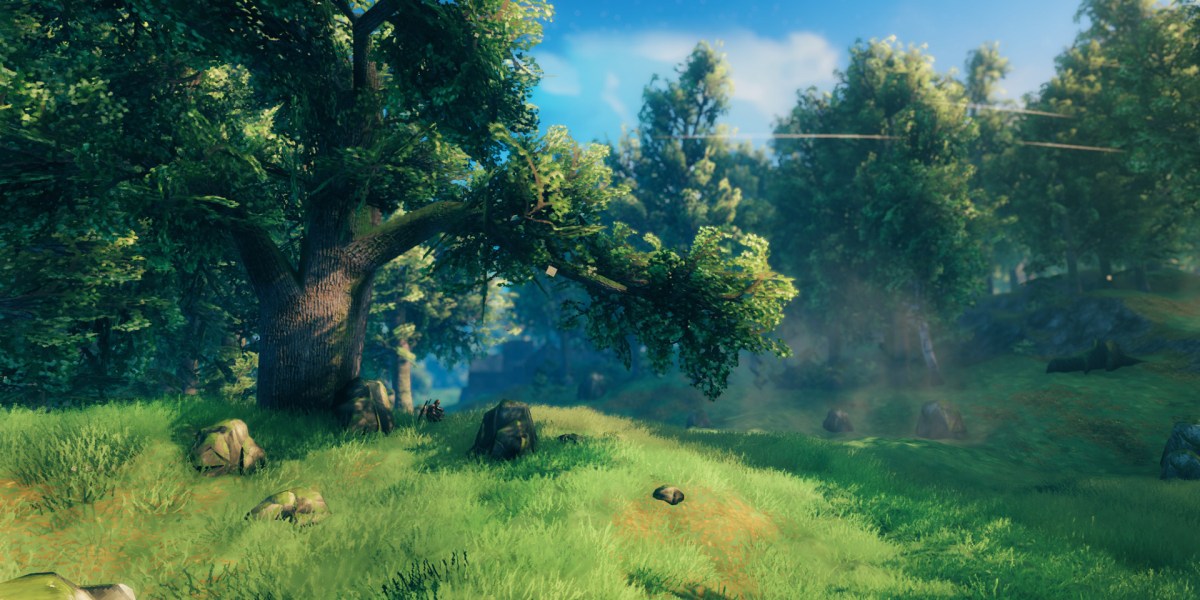 Valheim places you in the role of a Viking warrior carried off to the afterlife by the raven Hugin. You start the game looking like a disheveled wanderer, but you’ll soon learn the basics. Here’s our Valheim beginner’s guide with tips to help you survive.

When you first create a character in Valheim, you can name the world that will be generated (its “seed” or procedural generation ID will also appear). Anyway, this world is your own and you can explore it at your leisure.

You may also invite friends to join you directly via your Steam buddy list, or you can join a community server provided that you know the password. Alternatively, you can hop on Valheim‘s Discord channel to find players or groups that are planning to go on an adventure. 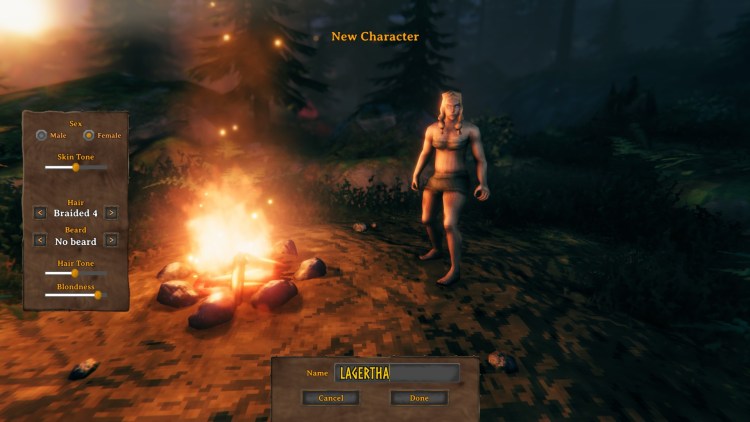 The raven, Hugin, provides some tutorial tips whenever you encounter it in the wild.

Hover your cursor over it and press “E” to see the info and just wait for it to despawn. 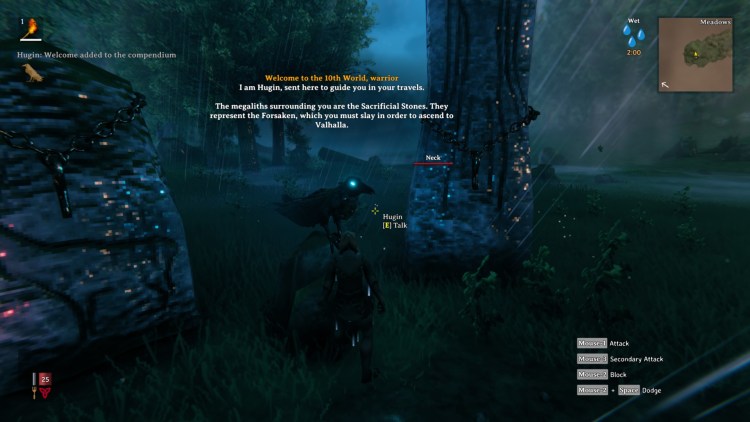 HP and stamina are two key factors you’ll want to consider early on in Valheim. Stamina is fairly straightforward. It gets depleted when you sprint, sneak, jump, attack, and block. You’d even lose a bit of stamina if you’re too busy mining or clearing land. However, like in most other RPGs, stamina is also replenished if you’re idle. You may also sit down to speed up the process.

As for health, it has a base value, and you’ll need to eat food so that it can gradually increase. 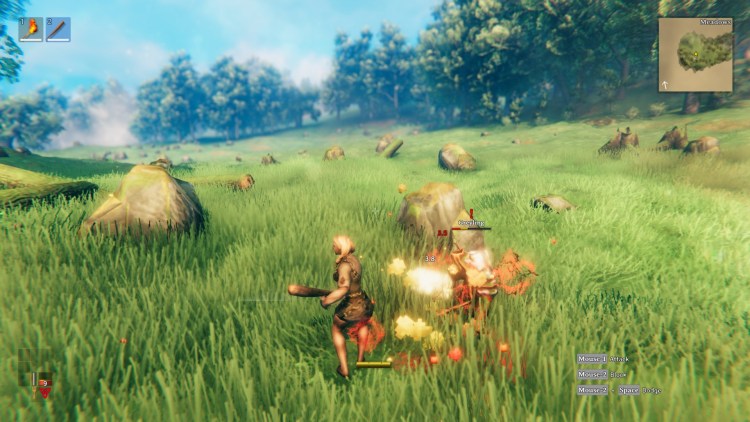 Speaking of food, consuming delicacies will restore and regenerate health and stamina. Of course, the value that’s regenerated will depend on the type of item you eat (i.e., cooked meat provides more healing-over-time compared to berries).

Note 1: When collecting berries or other items on the ground, you don’t want to smash stuff with your weapon or fists. Instead, make sure that your mouse’s cursor is hovering over the object, then press “E” to pick it up.

Note 2: Unlike other survival games (i.e., Don’t Starve), you don’t actually suffer the effects of starvation in Valheim. You can practically ignore your hunger meter while you’re crafting and base-building. However, consider eating various food once you plan to travel to new areas or fight bosses as these provide you with regen buffs. 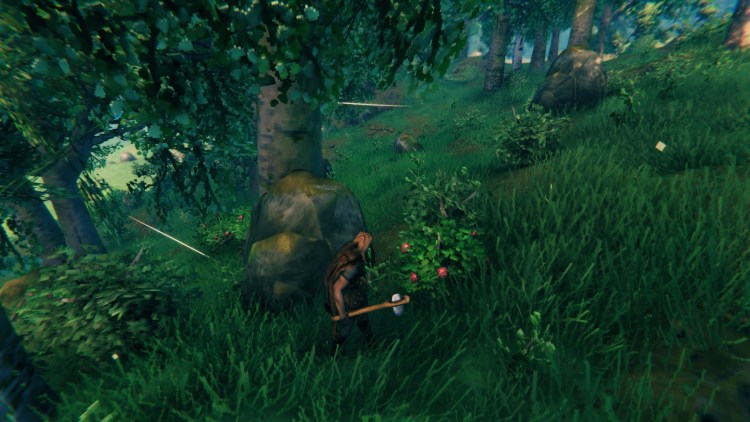 Think of Valheim‘s skill and EXP mechanics as akin to Skyrim‘s proficiency system. If an action corresponds to a particular skill (i.e., jumping, sprinting, clubs, or axes), then doing these actions more often will increase that particular skill’s level.

Assuming you meet an untimely demise (which is convenient for a resurrected warrior), you’ll notice something called “no skill drain.” That’s because death makes your character lose 25% of the EXP gained from each skill. Not only that, but you’ll also drop all the items in your inventory. Thankfully, your tombstone/corpse will be marked on the map, and you can run to it to grab your stuff. While “no skill drain” is active, you won’t lose skill EXP if you die during your “corpse run.” 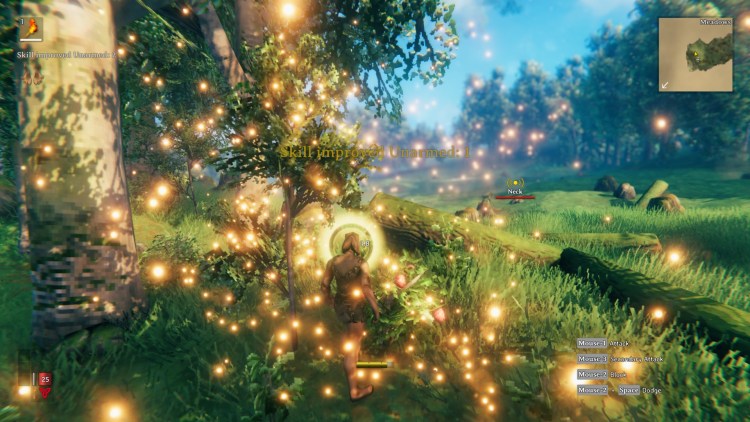 The weather plays a role when you’re out adventuring in Valheim. For starters, nighttime will make your character feel “cold” (a status effect). This greatly lowers your health and stamina regeneration until you’re able to get close to a fire.

As for rains, these will put out any fires you’ve lit and you’ll also get the “wet” status effect. This effect makes you resistant to fire, but you also become weaker to lightning and frost damage. Likewise, your health and stamina regeneration will be lowered. 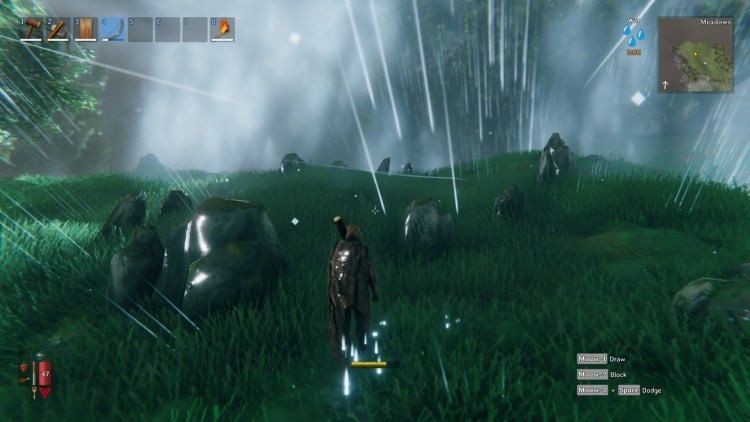 Your character only has 300 carry weight available. Still, you might be able to find a secret vendor named Haldor. He has a belt called the Megingjord which increases carry weight from 300 to 450.

As for your inventory capacity, sadly, it’s limited to just 32 slots. As of now, there’s no way to actually increase this. However, you could construct storage chests so you can leave your stuff at home when you’re out trekking in the wilds. 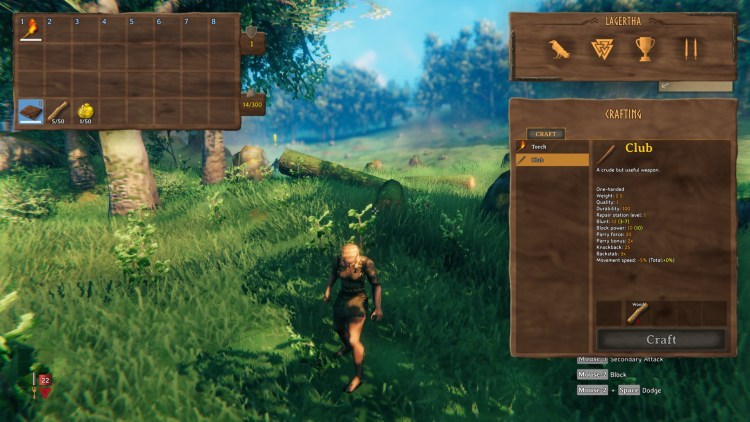 The hammer and stone axe

You’ll want to avoid combat in the first few minutes or so since your character can only punch stuff. Your immediate goal, for now, is to clobber some plants to obtain wood, and check the ground to pick up stone. These will let you craft the hammer and the stone axe:

The stone axe deals slightly more damage than your fists, so it’s useful against weak mobs like Greylings and Necks. As for the hammer, it’s an all-important tool that lets you craft items, repair objects, and construct buildings. 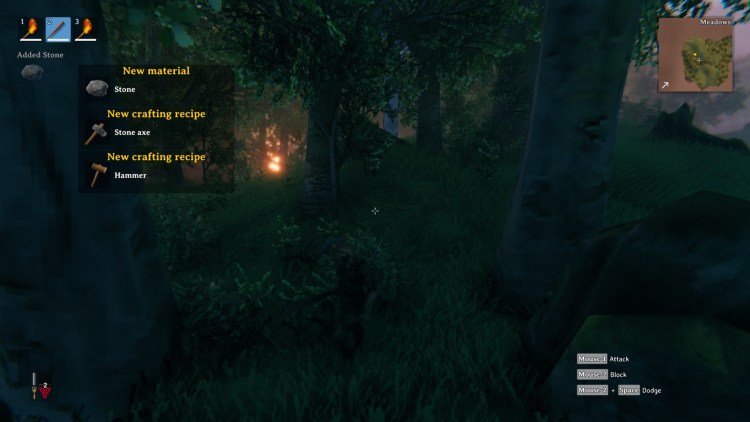 Keeping a backup of your save file

A few days ago, we reported a game-breaking bug that would destroy your created world completely. Try to keep a backup of your save file whenever you close the game to avoid any mishaps.

You can find your save file in C:\Users\Username\AppData\LocalLow\IronGate\Valheim\.

If you are playing Valheim this weekend, please backup your world and characters. The evil world-destroyer bug is still roaming free =( #valheim

Valheim uses old-school and slightly pixelated graphics. Likewise, it doesn’t have a photo mode feature in the traditional sense. Instead, you can press Ctrl+F3. This will hide all HUD elements, and you can simply press F12 or a corresponding keybind to take screenshots. 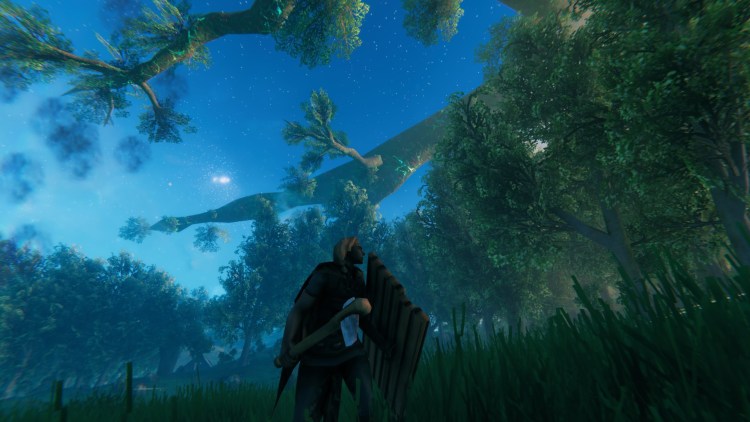