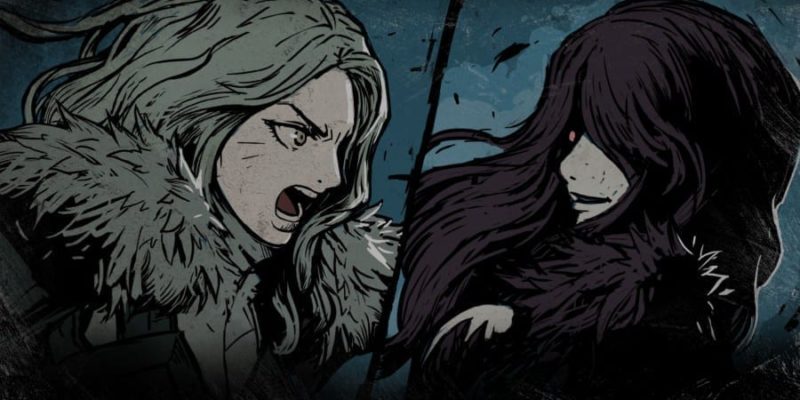 Vambrace: Cold Soul is a fantasy roguelike game from Devespresso Games and Headup Games. Anime characters and JRPG references are combined with a bleak landscape in the grip of a deadly winter — Icenaire. This survival guide is to help you on your journey with Evelia Lyric, just so you can keep warm while staying frosty. Check out the trailer below for some combat basics:

The first order of business is to learn a bit more about character stats in Vambrace: Cold Soul. The in-game tutorial only provides a few hints and there are no tooltips. Heck, as mentioned in our official review, you can’t even recheck older tutorial messages.

Your combat rating represents the amount of damage you deal to enemies. A majority of skills in Vambrace: Cold Soul would note that the attack would do X combat damage, and this is the coefficient that’s applied. This is different from “true damage” for certain skills as that’s a fixed value.

Your awareness rating, meanwhile, indicates how often you’d spot traps in dungeons and it also determines your character’s turn. This is a must-have stat for all your fighters, and around 3 to 4 awareness would be decent. After all, getting your turns earlier means taking out enemies before they can even attack. Still, when it comes to detecting traps, the party member with the highest awareness determines your success rate, so having one teammate with 5 or more points would be great.

The overwatch rating determines just how much health and vigor you can restore while resting at a camp. Each dungeon area will normally have at least one camp, and so it’s best to have one character with a high value for this stat. 5 points or more would be great since you can save up on healing items. Do note that resting and recuperating will net more terror on your Geistometer (more on this later).

The sleight rating determines your success rate when opening crates and treasure boxes in the wild. This isn’t as important as the other stats, but it does help just a tiny bit if you want to have a bigger haul when you go back to Dalearch (the town or hub). Similar to awareness, the one with the highest sleight rating determines how successful you are when opening chests.

The merchantry stat is next to useless. You’ll rarely be bothered with discounts and markups since it’s possible to be swimming in gold just by farming and selling items. This does not help you survive Vambrace: Cold Soul at all. 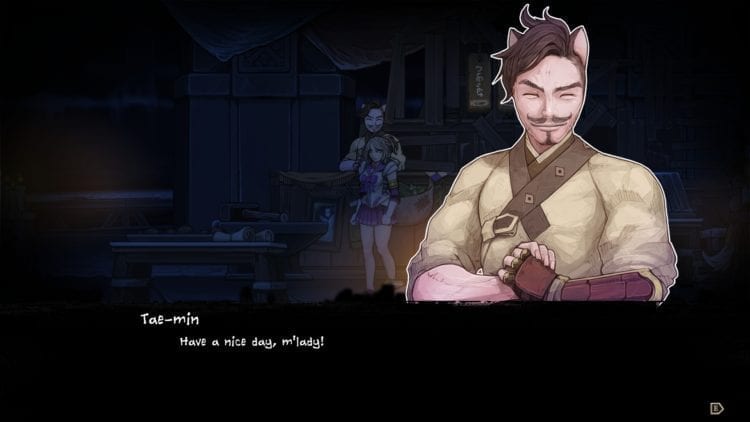 Thank goodness this merchant was not wearing a fedora!

You should also take a look at your health and vigor. The former, of course, is self-explanatory, and it represents the amount of damage you can take before dying. As for the latter, you lose a point of vigor for each room you enter in a dungeon area. Losing all your vigor also leads to death. Carrying capacity is dependent on the number of people in your party. If you go above the limit, your characters will suffer debuffs to their stats.

Note: Lyric can “level up” as you progress further in the story, and you can choose the stat boosts that she obtains. I personally increased her combat, awareness, and overwatch stats. 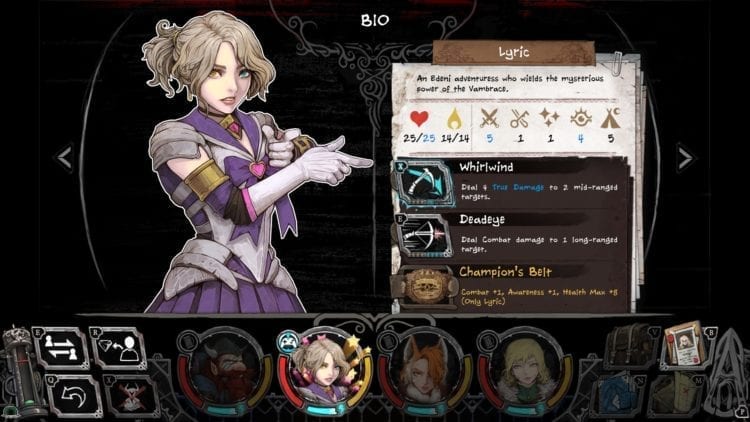 Lyric hits like a truck, she’s got decent awareness, and she can easily restore health and vigor at camp. Oh, and she’s Sailor Moon now.

There are multiple ways of obtaining items in Vambrace: Cold Soul:

You can save up on a lot of hellions (the game’s currency) by simply going on farming runs. This is when you’re just looking to beat up some ghostly baddies or find treasures, not even bothering to waste supplies while heading to a boss. Just leave the dungeon at any time to return to Dalearch. You get to keep all of your items in tow so you can sell or use them as crafting materials later on.

Relics are also quite an important feature in Vambrace: Cold Soul. There are a handful of them, conferring boons to your characters’ stats (including health and vigor), and some even change their flourish or special attack. Lower-tier relics might boost a stat while lowering one, but epic (purple) versions, obtained later in the game, provide bonuses only with no downsides. Try to craft relics that can boost the aforementioned important stats — combat and awareness for most party members, and overwatch for at least one. 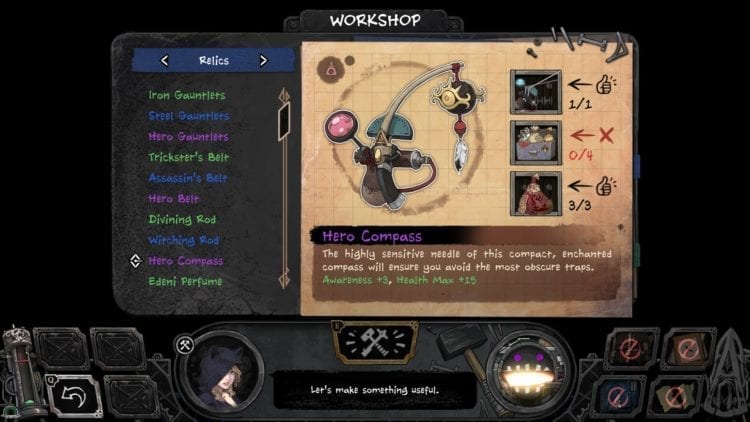 You’ll need to do a bit of crafting to obtain some of the best items in Vambrace: Cold Soul.

Evelia Lyric needs to be joined by three other recruits so she can explore Icenaire without worries. Recruiting in Dalearch is also free. But, the problem in Vambrace: Cold Soul, as mentioned in our official review, is that you don’t even get to see the stat lines or skills of these would-be adventurers. In fact, I spent extra hours on the first chapter alone just looking for a viable team composition. I went in and out of the dungeons to see how my team would fare.

Remember, Lyric is already a ranged fighter so you can place her at the back of your formation. Anyway, these are, in my opinion, the ideal party members for Lyric’s journey:

If you don’t want to play too defensively with a Celestine leading the pack, then you can pick the Dragoon or Berserker. They, unfortunately, have a very low awareness stat, making them last in line to take their turns.

Note: If Lyric dies, your team gets sent back to a healer in town. If any of your generic teammates die, they’re gone for good, including any relic they have equipped. 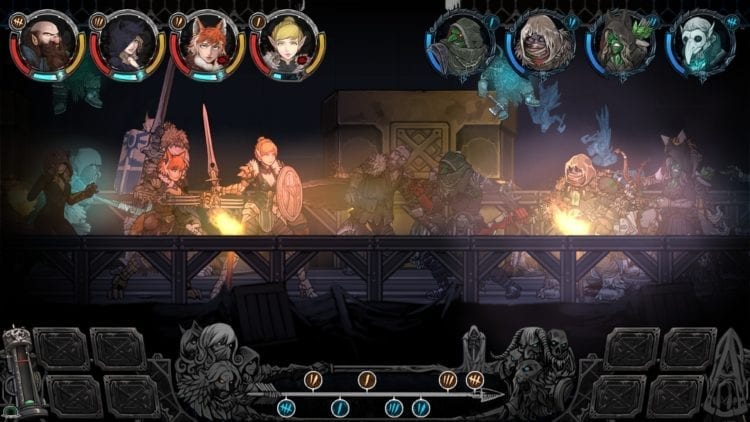 Even if you’ve got an ideal party setup, it would be all for naught if you get confused by the map layout in Vambrace: Cold Soul. Each dungeon section will have multiple rooms, randomized, and the goal is to reach the exit. Each room can have one of these:

When you open your map, think of each room as though it’s always horizontal but relative to the direction you came from. The next rooms you’ll end up in will also be dependent on the arrow markers and the placement of pathways in between rooms.

Take a look at the example below, and take note of the symbols. The rooms without any symbols are the ones which I did not enter. Next, take a look at the encircled area (room 7) and check the image’s caption: 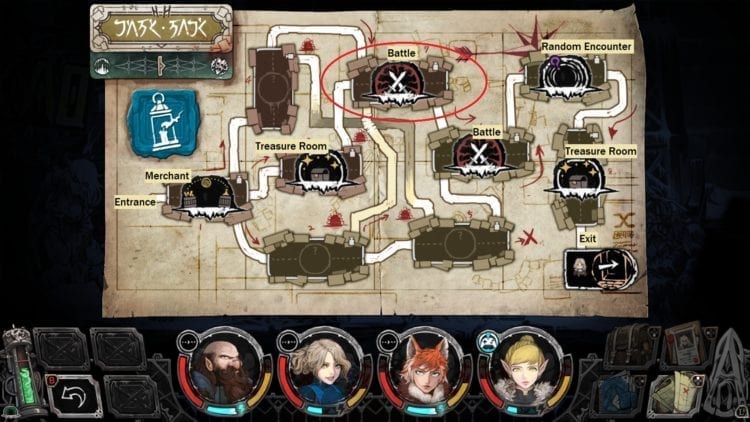 Note: When you’ve completed multiple sections of each dungeon or chapter, you’ll arrive at the final area. There are still some fights here prior to the actual boss, although terror and vigor effects no longer apply. These final areas will also have a unique puzzle of sorts when it comes to their actual layout. 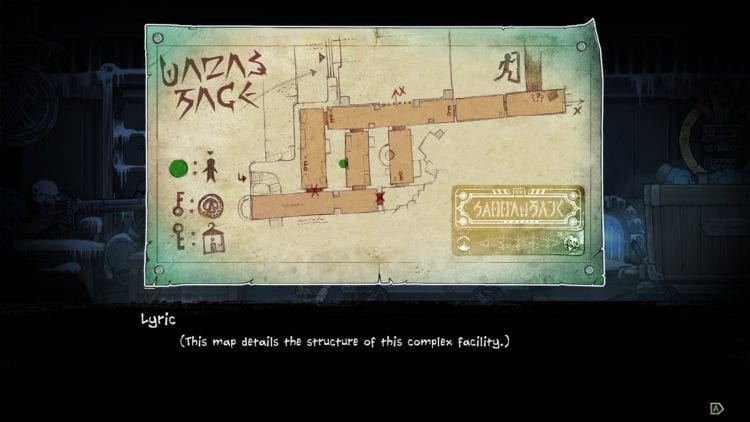 The final areas for dungeons will have their own puzzle-style layout.

I’ve mentioned terror a couple of times already. Terror in your “Geist-o-meter” (lower left side of your screen) increases for each room you explore in a dungeon area. If you restore health or vigor in a camp, or a random effect happens via an encounter, then it also increases significantly. Soon, the area will be shrouded in a hazy green mist.

When the terror threshold is crossed, the map is completely altered. You’ll no longer find various instances mentioned above such as camps or merchants. Instead, you’ll face off against a set of enemies again and again for each room.

Unlike regular fights which no longer occur once you’ve cleared that room, green mist fights will keep happening in every room, even the ones you’ve already been to until you reach the exit. Going to a new dungeon area will clear the terror you’ve accumulated.

Sometimes, it’s even better to let that happen. The enemies you face (two dwarf melee wraiths and two fox archer wraiths) are pushovers compared to some regular enemies which have poison or fire attacks, or ones that drain vigor. Also, if you need to farm ectoplasm for crafting, then this is how you do it. 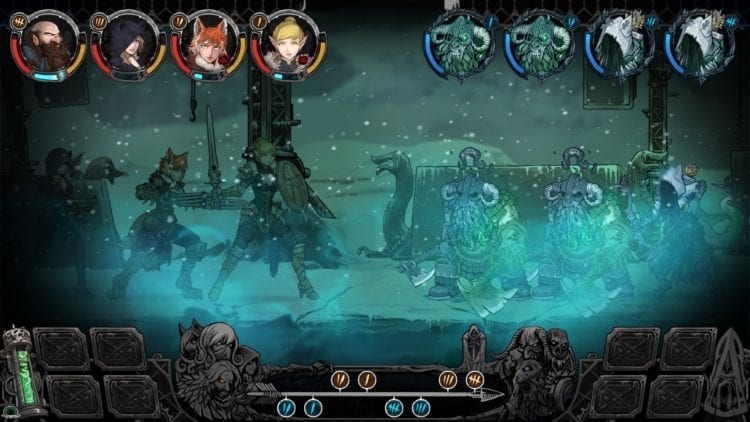 Last but not least, the easiest way to progress through Vambrace: Cold Soul’s story is to make sure you’re stocked up on healing items while having decent relics equipped. To do that, you’ll need to do a bit of farming. Again, you can leave dungeons to go back to town, and you can replay dungeons that you’ve already completed.

You’ll notice telltale signs of each room type before you reach the middle of the screen (where a battle usually triggers if the other instances aren’t present). Let’s say you don’t want to end up in a fight. Well, just check and see if the next room already has lots of chests. That’s a treasure room and you won’t end up in a battle there.

If you’re over-encumbered due to carrying a lot of loot, don’t just hastily destroy your items. Instead, check certain rooms to see if Gerrard’s there so you can sell what you don’t need and gain a bit of hellion (money) back. 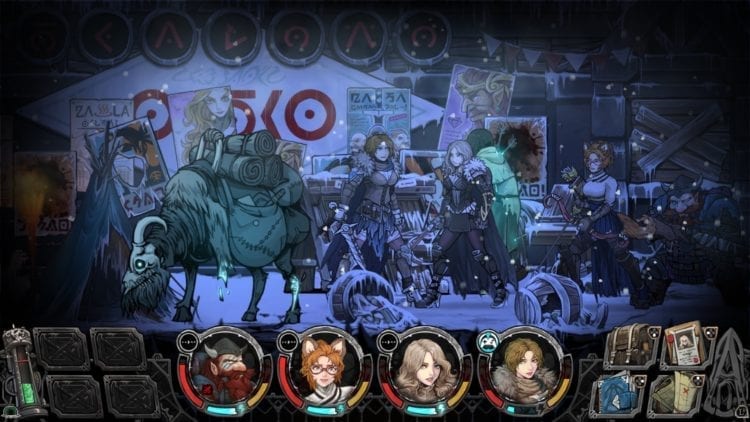 If you need to buy or sell something in a dungeon, be on the lookout for Gerrard. You’ll spot the outline of his, uh, dead horse-thing before you even reach the middle of the screen.

We hope this survival guide helps you in your adventures in Vambrace: Cold Soul. Icenaire may be a frozen wasteland, but you always gotta stay frosty. Don’t forget to check out our official review as well. You can find Vambrace: Cold Soul via its Steam store page.

AMD shows off PC hardware to rival Nvidia and Intel