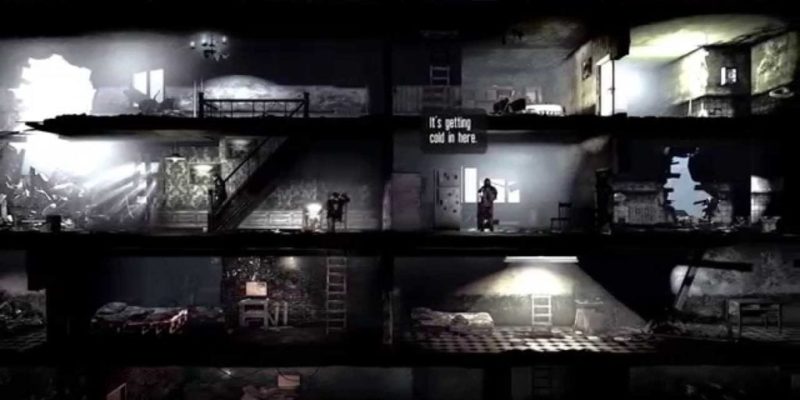 This War of Mine takes place in Pogoren, a city torn apart by civil war. Your role amidst the ongoing turmoil is to ensure your group of survivors’ safety and survival. Players are then given the task to create ally relationships, scavenge supplies to survive, and use them to feed your survivors and make your damaged house feel a little bit more like a home.

While this may seem like the simplest of tasks, it then presents a gameplay mechanic based off of your decisions. Your group always consists of a random group of people, usually ranging from two to four people. There’s Pavle the pro football star, Bruno the famous chef, Katia the reporter, Arica the girl from the streets, and several more.  Controlling each equally you can use their individual skills to your groups’ advantage and particular needs to survive, depending on the weather and everyone’s health.  You must decide whether you can spare a member of your team to help out a neighbor in need, or if it is worth leaving the house to scavenge in below freezing weather. What lines would you be willing to cross to survive?

At its roots, This War of Mine is a 2D, point-and-click game where a group of survivors must endure the gravity of war during the cold bitterness of Winter. Most of the day is spent exploring your shelter for supplies, improving your stronghold by building valuable equipment/upgrades, and trading goods or services with neighbors. For example, when a neighbor asks you to help them rob a neighboring survivor hold-up, if you agree you may get a ton of supplies, but you will be short a survivor for that night’s scavenging mission.

Each day you must decide how you want spare your scarce resources while trying to survive through a war that is happening all around you. Just trying to stay warm and full are hard enough, it’s impossible to stay positive and not become depressed without everyday addictions like coffee and cigarettes. Each day in This War of Mine truly began to make me feel like I was surviving through an endless war with no hope of end in sight. Each night is spent scavenging abandoned or guarded, but always destroyed, buildings for any scrap of food or useful materials. Each night is haunted by the same ominous soundtrack that keeps me on edge with my stomach in knots, hoping to not run into any strangers. Occasionally you will meet people who are in similar situations and willing to trade, but there are many places that are overrun with military guards or homeless gangs. Deciding whether to approach cautiously, sneak around, or to try to take matters into your own hands are all decisions that will not only affect the solo scavenger, but the group as a whole.

The game does prove difficult and challenging. Having played seventeen hours, I can say that I have yet to survive all the way through the war, either due to freezing weather, internal struggles amongst my group of survivors, or merely a lack of vital resources. Either I have enough fuel to heat the house or to make nourishing food, not everyone agrees with stealing or even helping neighbors leading to arguments that can turn nasty, and I can just never ever seem to afford enough medicine and food at the same time.

Even smaller aspects of the game and harm the group’s well-being overall. For example, if you do not close the doors in your drafty home, it actually makes a difference to how well your stove will work. Not only that, it can boost everyone’s morale, being that you can hold off scavenging for the night and allow everyone a restful night by the fire and hopefully, in a bed.

In terms of characters, the game offers quite a selective palette. There are choices in types of strengths, weaknesses, and how they can impact your game. These characters also make a difference in your shelter, delivering different levels of useful supplies and built-in features based on who is there.

It might be easy to simply send out your strongest person, there are some realizations that might become apparent in doing so.

For example, you cannot rely too hard on the builder to build or the strongest to always go scavenging, but they are humans who need food, rest, and occasionally, medical attention. You must let the builder get enough to eat and the strongest a chance to sleep once in a while. Furthermore, as humans surviving in a tattered shelter on scavenged scraps, life can quickly seem very bleak and pointless, leading your characters to become sad and eventually too depressed to be of much help to the groups’ overall survival. Trying to find ways to stay distracted and ignore the war outside are just as scarce as scraps of food.

What lines would you be willing to cross to survive?

After so many endless hours of trying to survive through this depressing war, I do feel more knowledgeable about just how thinly I need to spread my resources. These instances often lead to holding out  until we receive some kind of outer aid or windfall of supplies. When you’re scavenging the same house for the fifth time, trying to squeeze those last few important materials into your backpack so you can have wood to burn, it almost seems hopeless. All of this done just to keep clinging onto life. A life living in fear of war and its endless ways of hurting you and those that you love. You then truly start to agree with the sentiment scrawled on walls all in these abandoned buildings, reading: “Fuck The War!”

For me, the most interesting aspect of This War of Mine is the way that you are slowly unfolding the larger story of the world, the war, and especially, the characters. Through using the radio you find out what is going on in the outside world, and by reading the characters’ diaries you can piece together their lives before the war and their personalities now, in the face of  wartime. Through each playthrough I learn more and more about characters I thought I knew and what is really causing this civil war between the rebels and the Pogoren military.

Occasionally gameplay can be a little clunky. For example, your house door doesn’t always automatically close, forcing you to click the door icon before clicking on any other action icon. Also, any small mis-click will send your character off track, possibly leaving them unfed or unrested for a night of scavenging. It is made up for with subtle details like the difference in vibe you give off whether you are walking or running, the ability to look through holes in doors without being seen, and the occasional curveball that throws all of your meticulously calculated plans off track.

Overall, there are many ways in which you learn about the gameplay mechanics, while building a story through various, innovative outlets. Each playthrough offers more things to learn, whether it is about the Pogoren universe or the unique characters within it.

Which continues to beg the question: What happens once you’ve survived?

By Will Backus14 hours ago
Reviews