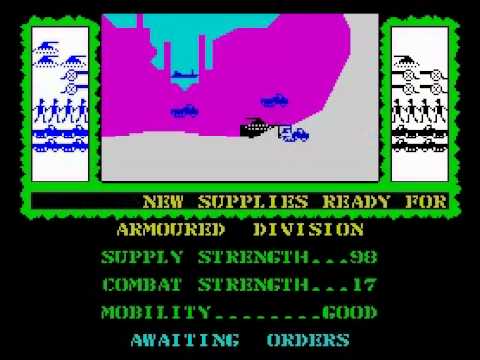 Strategy games have come a long way in the past 20 years, and sometimes I feel they can be over-complicated for the sake of trying to do something different. So when developer Obbe Vermeij dropped me an email last week about War, The Game, it got my attention. One of my earliest strategy gaming memories is of a ZX Spectrum game called Stonkers, a title about dominating the small map by strategically moving units around. It was a frustrating game, but strangely compelling. War, The Game reminded me of that straight away.

As a bit it background, Obbe Vermeij worked on the GTA franchise for Rockstar before going it alone. He wanted to create a strategy game that was bare bones; a game that required thought, but at the same time kept the gameplay extremely simple and understandable.

In War, The Game you are a commander for hire and the idea is to create wealth by commanding national armies in a vast array of single player missions that will have you moving troops around every corner of the globe. You actually do play on a spherical globe which has an impact on the strategies you can employ.

This is a game with a limited array of units: infantry/ground forces, the navy and the air force. These three elements, along with geography, dictate how a mission can be tackled. It sounds straightforward, but it’s anything but. Platoons are strengthened when defending a controlled city, aircraft (such as fighter and bombers) have range limitations unless accompanied by an aircraft carrier, and building new units in held locations takes X amount of days in game time and cash. There’s quite a bit to think about before committing to an attack.

Moving around the globe is a simple point and click affair, but Obbe has used a few nifty tricks to make controlling larger armies and groups easier. The game is primarily mouse controlled but there are a few shortcuts available such as holding down the mouse button over a unit for a longer period, then doing the same on another unit, to group them. Once in groups they’re effectively a single army that will arrive at the target destination at the same time. This prevents a squad of infantry piling in with no air or armour support.

Gamers used to the typical RTS controls will perhaps need to familiarise themselves with these systems, but they’ve been well thought out and implemented. It feels as if you have more control with simple mouse clicks and movements, and I especially liked shaking the mouse to deselect units.

Europe is on the march

War, The Game is about real strategy and timing and the scenarios can be tough. You have to think clearly about movement and where you deploy troops, especially in stages where you’re against the clock. The game works on a day cycle and there are a few tricky missions that require you to complete an objective in X number of days. There’s a tough one where you have to liberate Johannesburg as the British stationed in Britain requiring you to get your troops half way round the world to the conflict zone in numbers (and in time) to take the city. Can you do it with one troop transport ship and limited funds? Yes, but it’s not obvious at first and missions like this make the game an exciting strategy experience. You’ll probably fail more than once on the more complex missions but War, The Game will keep you going back to try again, and again, and again.

It’s also not easy predicting what the AI will do. When you play a scenario once and then try it again, the AI feels like it’s reacting to your movements. In a recent battle for power over Europe, Italy just kept on winning. Sensing which way the wind was blowing, I decided to restart as Italy and eventually won the mission by gaining the required influence goal with the help of my AI partner Germany. Play again as Britain and the game will play out completely different. Choosing an ally can be all-important depending on where they are geographically located and it’s something to be aware of when choosing sides.

Time, patience and planning are always required. Even though the game plays out on an accelerated day cycle, you do have the ability to jump through a day quickly by hitting the space key. That temptation is always there, but sometimes it’s just not wise until you’ve seen all the enemy movements and started troop production and movements of your own. This aspect of the gameplay just adds to the tension. Making decisions without proper planning or building enough forces can be costly.

For a laugh, I thought I would try the World Domination mission where you attempt to take over the world. With my limited funds I chose the mighty Scotland … and let’s just say I didn’t last long. As soon as I built any type of ship in Edinburgh, the English fleet sailed up the coast to sink it. If there was ever a reason for Scottish Independence, it’s this. It does however show how well the AI reacts to your decisions. The game knew that a decent sized Scottish navy would spell trouble for Queen Liz.

World Domination is really the final mission in the game, and the funds you accrue in the previous missions determine which nation you can select. If you want to play one of the major nations such as the US, UK, China or the larger European countries then you need about 20 billion in the bank. It’s not easy making that amount of cash, but if you can, then you’re rewarded with the mightiest nations to control.

The mighty China on the move

World Domination is mental with every country going at it hammer and tongs. There’s so much action going on around you that if you take your eye off the ball for a minute some sneaky bastard will slide in behind your front-lines and capture your cities.

Right now War, The Game is a single player only but there has been mumblings about a multiplayer mode which would be fantastic to see happen. The lack of any human-on-human action is probably one of the few disappointing things about this game.

While War, The Game may not be packed full of amazing visuals, it does what it needs to do brilliantly. With no terrain to hamper movement or line of sight coming into play this is pure, “big picture” strategy. Your computer companion talks you through the missions with her robotic voice, chirping in with (optional) tips and strange requests; like asking you out for date when 14 February comes around. It’s all rather charming and/or weird.

The game costs around £2.99, which is an absolute steal even in this age of Bundles. If you love strategy games with some tough challenges, then there’s no excuse not to buy this. It’s the best strategy game I have played so far in 2014.