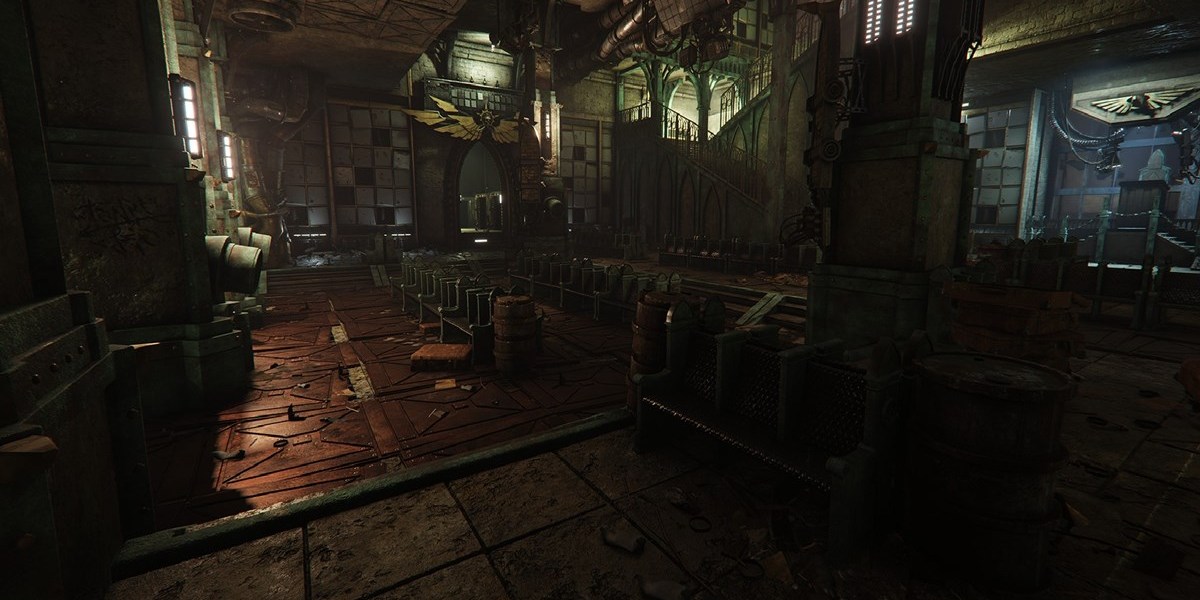 There are seven mission types in Warhammer 40K: Darktide. You can see some of these once you access the Mission Terminal screen in the Mourningstar hub. When you click on a particular map card, you’ll notice the primary objective cited therein. Due to randomized rotation, it’s also possible for certain maps to have a different primary objective on the card. As such, the way you progress and conclude a level might be different, too.

Note: Missions may have secondary objectives as well, such as collecting scriptures or grimoires. These are completely optional, offering only monetary and XP rewards upon successful completion. A Strike objective tends to have a finale involving Chaos corruption/daemonic infestation. Think of these a pox-ridden growths that need to be destroyed.

The Raid objective usually has a finale where your squad has to gather several important items in an area. For instance, you might be tasked with collecting special ammo crates or contagion samples.

The Assassination mission type in Warhammer 40K: Darktide is fairly straightforward. There’s a boss at the end of the level, and you’ll have to take him out. The run will end a few seconds after eliminating the target. This involves the operations being undertaken by heretics (i.e., broadcasting propaganda or creating deadly pathogens). Your team will need to sabotage these operations.

This pertains to a core component in the facility that has been shut down or damaged. You’ll have to carry a couple of cryonic rods to flush the system and get it working again.

The Investigation mission type in Warhammer 40K: Darktide has a section where you follow a Servo-Skull while scanning the area to reveal pathogen sources. Once you’ve scanned all of them, you’ll need to hold your ground until data transmission is completed.

The goal of the Espionage mission type in Warhammer 40K: Darktide is to send false information to the heretic forces. You’ll do this by “interrogating” security stacks with AdMech devices, eventually uploading jumbled intel to an array. If a security stack becomes disabled, you’ll need to interact with it, then click whenever the moving reticle is on top of a marked symbol. By Sam Robins8 mins ago
Guides

By Jason Venter51 mins ago
Guides

By Jason Venter54 mins ago
Guides