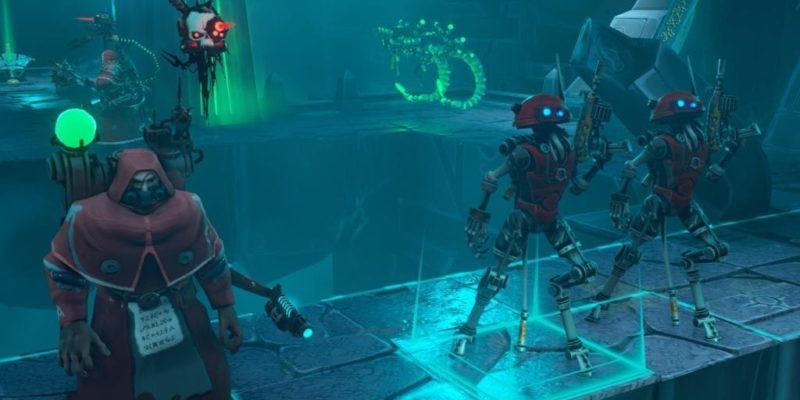 I reviewed Warhammer 40,000: Mechanicus in November 2018. Back then, I could not help but give praise to the Omnissiah and the efforts of developer Bulwark Studios. Moving on from their first title, Crowntakers, Bulwark managed to craft a wonderful experience that captured the (machine) spirit of the first-ever Adeptus Mechanicus (AdMech) and tech-priest-focused tactical RPG. But, like what we’ve come to expect from many Warhammer 40K video game adaptations, one step forward is often followed by two steps back — and Warhammer 40K: Mechanicus’ expansion, Heretek, is a prime example. 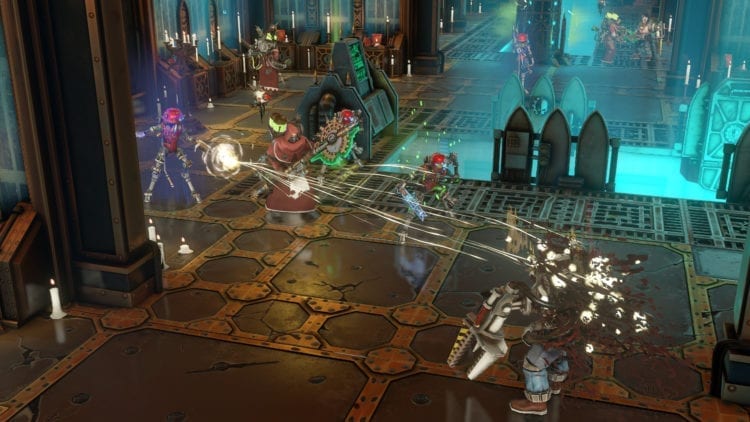 Heretek: The story so far

Heretek’s content is weaved seamlessly into the Warhammer 40K: Mechanicus base game. Truly, that in itself shouldn’t be an issue for first-timers. The problem was that I had already played the base game and Heretek barely added anything worthwhile.

The main enemies in the expansion are none other than a renegade faction of AdMech cohorts. Led by an Arch Heretek, Epsilus Dammek-Yoth, a magos who’s gone off the deep end when it comes to corrupted technology, it’s now up to you to put a stop to the revolt. You’ll face off against enemy servitors, skitarii, and maybe even a wayward tech-priest or two.

Unfortunately, the Heretek expansion provides naught but five new missions, all taking place in the Caestus Metallican. That’s your Ark Mechanicus floating fortress in the vastness of Warhammer 40K’s space. Unlike past dungeon delves in the Mechanicus base game, you don’t actually explore the entire locale. Instead, Heretek’s new missions only provide some expository dialogue and a few choices to make.

Your choices would determine whether some enemies are dead by the time you start a single battle, or where you start off on the tactical map. It felt less like a dungeon crawl and more like a very short Choose Your Own Adventure book with but a handful of sentences. 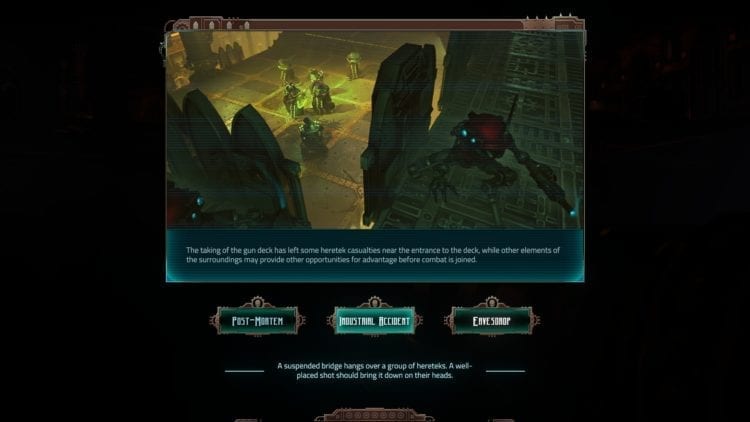 You went from short dungeon crawls to even shorter text crawls.

If you thought you could try out Heretek’s new missions one after the other, then guess again. Because of how the expansion’s content is interwoven with Mechanicus’, you are, in fact, supposed to play through the base game once more.

It’s not a very welcome trip down memory lane since barely anything has changed from what you’ve experienced in the past. You’re likely to fight the same bouts, the same Necron opponents, the same bosses, while trekking through same maps. 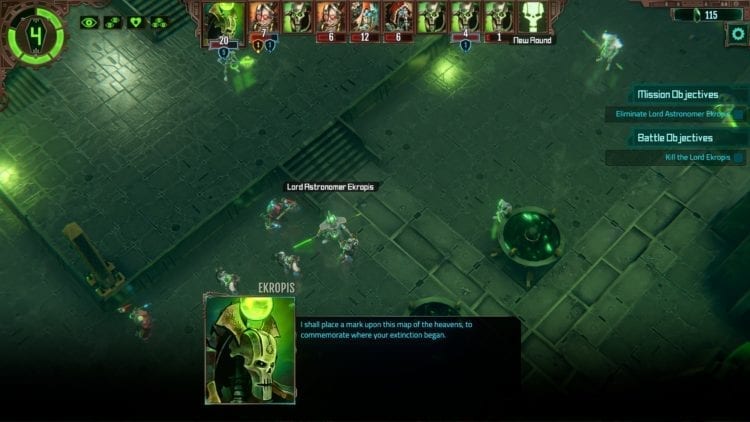 Imagine being taunted by the Arch Heretek, only to realize that, wait, you’ll need to redo a random mission against some Necron flayers or immortals just so you can make the next new assignment pop up. (It takes around four or five runs to get one of the new missions to pop up on your hub.)

This time around, at the very least, you can tweak the game’s difficulty to your liking. There are even additional options that you can change that’d make Warhammer 40K: Mechanicus – Heretek as easy or as difficult as you want it to be. 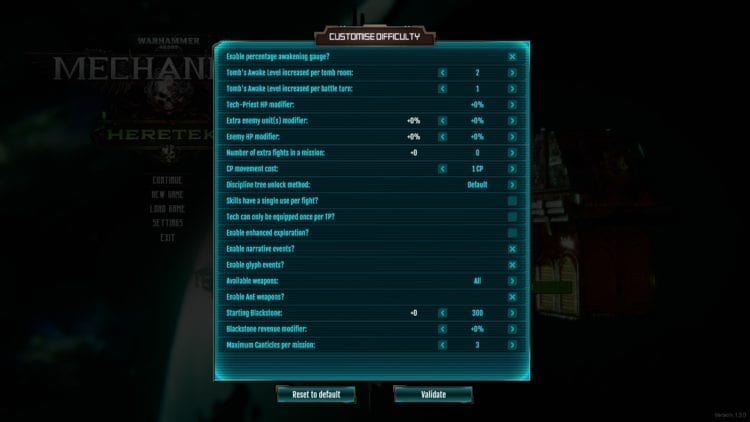 Some new options you can tweak for the campaign’s difficulty.

In the grim darkness of the far future, there are a few noticeable bugs. It seems the cogitators aren’t working, or perhaps a menial servitor accidentally poured boiling oil inside the machine spirit’s chamber.

One of these bugs happens when you hit F12 to take a screenshot. The game, randomly, ends up with its own “Photo Mode.” This allows for some nifty images, but it is, overall, quite annoying since you’d have to take another screenshot just to switch back to the “normal view.” I don’t recall this happening in the base game. 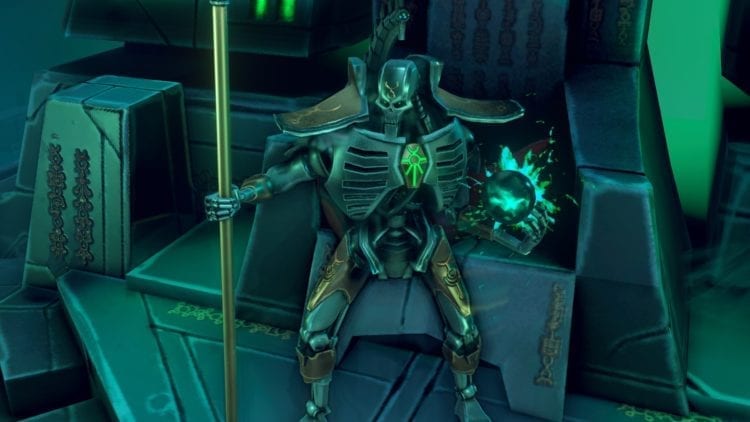 “Accidental photo mode” can give you these nifty images. 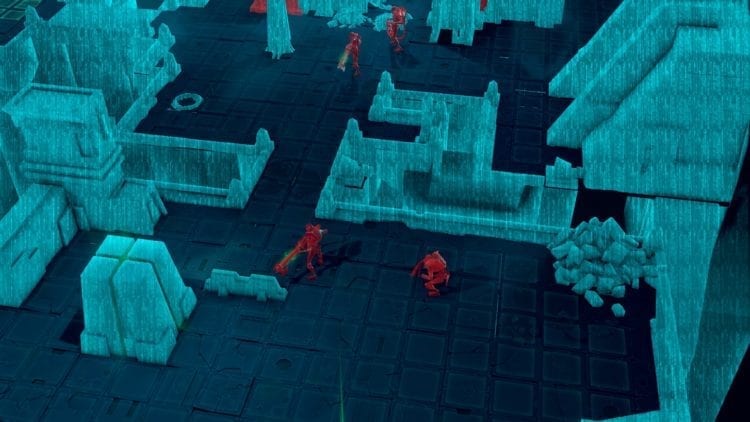 As well as “Accidental Superhot or Frozen Synapse.”

The other is directly tied to the mechanics of the game itself — the “Mechanicus mechanics” if you will. One key feature is the ability to use a tech-priest’s servo-skull to reveal an enemy’s stats. In turn, you’d get a cognition point (CP) allowing you to attack, use items, move again, or summon reinforcements. This mechanic actually adds more layers to the tactical gameplay.

Note: The servo-skull ability is working as intended. However, there seems to be some confusion given that the tooltip shows you’ll be gaining CP when used. This is without noting whether this is for enemies or for cognition pillars.

Even one of the aforementioned units, the sicarian infiltrator, had questionable perks. Supposedly, it can’t be targetted until it attacks. Well, tell that to the Necron deathmark (which has automatic “overwatch”) since it still manages to target and shoot down my units despite not having attacked before. 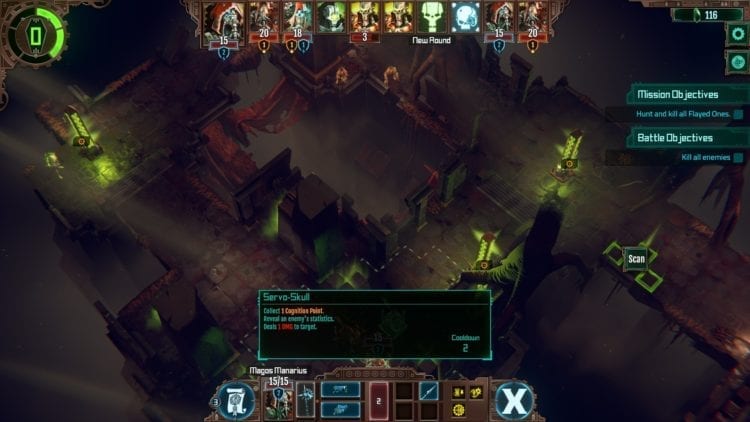 Using the servo-skull no longer provides CP even though the tooltip says that it does. This limits your tactical options during battles.

A brand new addition to Warhammer 40K: Mechanicus – Heretek is the Xenarite subclass. Lore-wise, Xenarites are AdMech folks that dabble in Xenos or alien technology, without going full villain (yet).

While the base game offered you half a dozen subclasses to choose from (such as the CP-focused Lexmechanic or the ranged damage-dealing Dominus), the Xenarite is purely HP-based. That means the perks you unlock all offer bonuses to increasing a tech-priest’s hitpoints, even ones that self-heal. It renders almost all other subclasses obsolete. 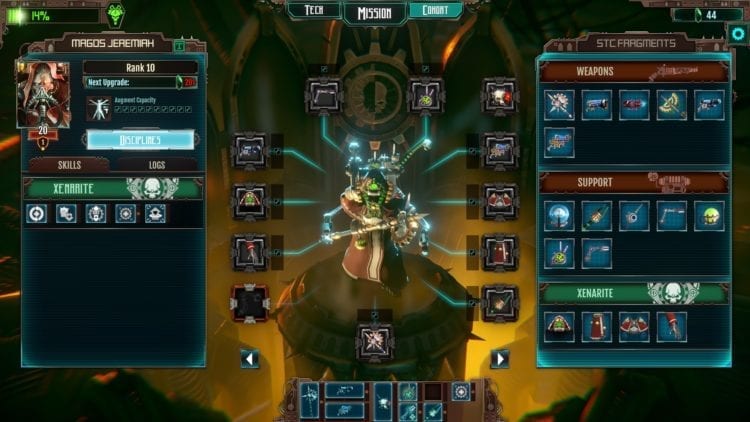 However, because of its primary focus, it feels as though there was a lack of creativity or imagination when making it. The other subclasses had some perk that felt as though it supported other units. The Xenarite is a pure HP tank that can take hits and that’s it. There are also additional Xenarite-based items which, surprisingly, could be used by any other subclass rendering lore-friendliness non-existent.

Warhammer 40K: Mechanicus – Heretek could’ve been a step forward for Bulwark’s stellar first foray into Games Workshop’s license. It had a chance to reinvigorate interest in a tactical RPG set in the Warhammer 40K universe. A newcomer might consider it part of a “more complete experience,” but a returning player might be vastly disappointed.

With limited new content, repeating your old romp, and a handful of bugs, it proves to be a disappointment that likes of which will bring shame to the Omnissiah. It lacks the spirit for the machine spirit. 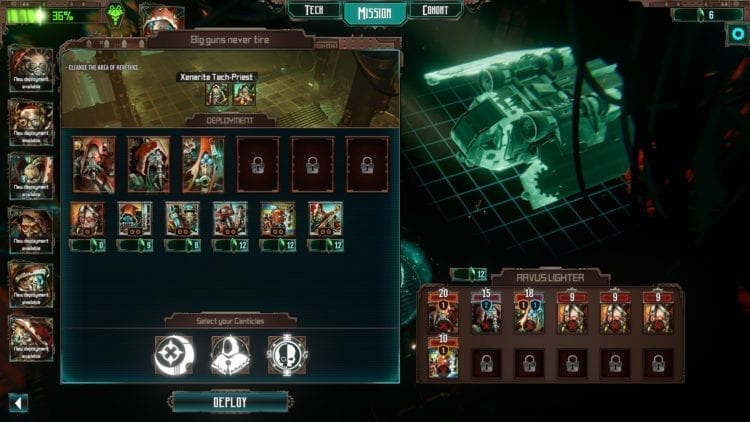 What could’ve been exciting new missions were few and far between, and you’re often playing the older ones that you’ve forgotten.

You can find Warhammer 40K: Mechanicus – Heretek expansion via its Steam store page. For our official review of the base game, head over here.

The expansion to the first-ever Warhammer 40K video game that focuses on the Adeptus Mechanicus, wielders of advanced technology and worshippers of the Omnissiah, the Machine God.
6

Wolfenstein: Youngblood comes out a day early for PC

Rainbow Six Quarantine is launching before April next year