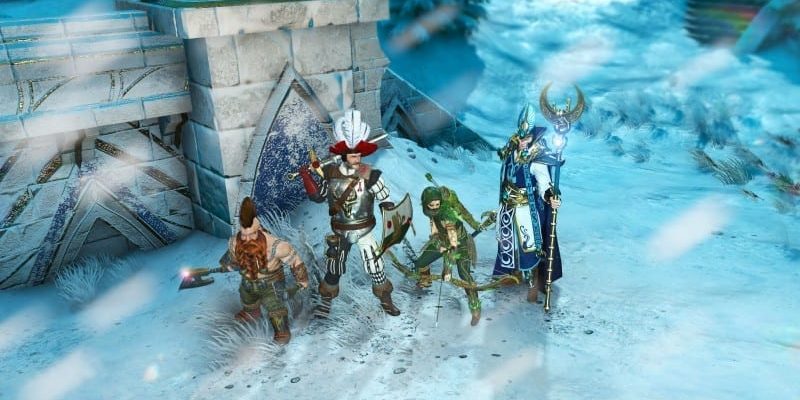 Action roleplaying games (ARPGs) have been around for decades. Titles such as Diablo, Path of Exile, Grim Dawn, and Torchlight have given many fans countless hours of fun and entertainment. Developer Eko Software hopes to capture that magic via Warhammer: Chaosbane, an ARPG set in the Warhammer Fantasy Battles universe by Games Workshop.

Truth be told, there are a plethora of offerings already using Games Workshop’s license, be it Warhammer 40K, Warhammer Fantasy Battles, and even Age of Sigmar. Many tabletop and lore fans know that most titles can be hit or miss. Unfortunately, Warhammer: Chaosbane falls a bit short of hitting the mark.

Warhammer: Chaosbane kicks off just after the end of a massive invasion led by Asavar Kul. The Everchosen (at the time) failed in his bid to terrorize the Old World, falling once he had sacked the Kislevite city of Praag. The forces of Chaos were reeling after the loss of their leader, struck down by Magnus the Pious.

Sadly, there was very little reason to celebrate. The people would rebuild, but Magnus himself was ensnared by dark sorcery. It’s now up to you, as one of four heroes, to save the would-be emperor and uncover the machinations of the Chaos gods. You’re aided by various NPCs, including the High Elf Loremaster, Teclis. That’s Warhammer: Chaosbane‘s story in a nutshell. 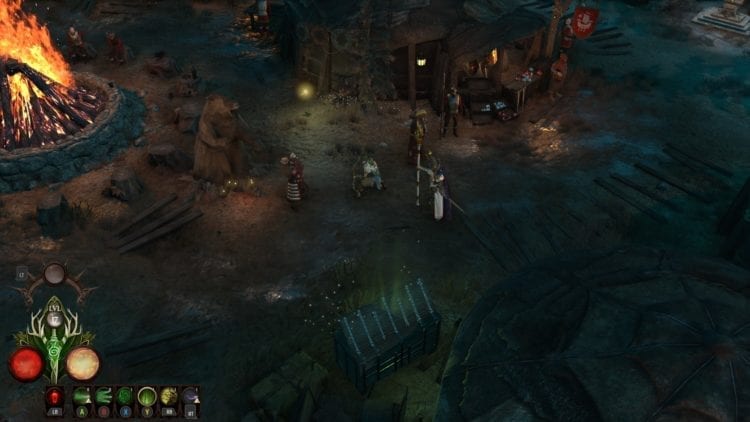 The most powerful High Elf spellcaster and the guy who taught magic to humans. He just lounges around back in town.

As mentioned, you’ve got four heroes to choose from: an Empire captain, a High Elf mage, a Dwarf slayer, and a Wood Elf scout. Each hero has their own unique skills and playstyles. When I previewed Warhammer: Chaosbane back in March, I played as Elontir, a wizard exiled from Ulthuan for his crimes. This time around, I chose Elessa, the Asrai scout from Athel Loren.

Warhammer: Chaosbane‘s characters actually have multiple skill types. Your basic skills generate energy/mana, which then gets used for more advanced skills. You’ve also got passives like health regen, minion buffs, poison damage, and more. There are also “God skills” (active and passive skills) that can be obtained by spending points in a character’s “God skill tree” (more on this later). Finally, those who’ve obtained the season pass or deluxe editions have “fan skills” or boosters for experience points, gold, fragments, extra emotes, a helmet transmogrification effect, and even improved item rarity.

You can have six active skills, three passive skills, and three fan skills/cosmetics/boosters. Depending on their point requirements, you may have to mix and match. Characters also have a “bloodlust” mode once they’ve collected enough blood red orbs, turning their attacks into deadly beams of carnage.

Sadly, even though you do have a lot of skills to choose from in Warhammer: Chaosbane, you’re probably not going to use every single one. In fact, one of the game’s major issues is that all the skills you obtain will just get upgraded to slightly better versions with little variety to them. I felt like a Waywatcher who didn’t have a lot of ways to waywatch, if you know what I mean. 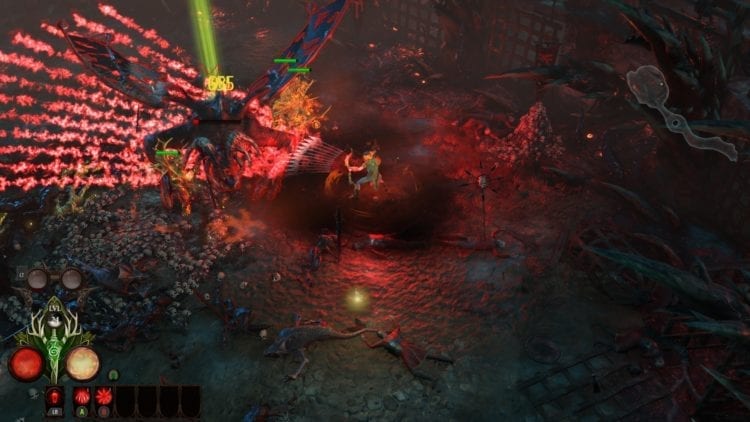 Exploring and fighting in the Warhammer world

The skills themselves aren’t the only ones that feel streamlined and uninspired in Warhammer: Chaosbane. Even combat, exploration, and the narrative, in general, suffer from the same flaws. For instance, you have a potion hotkeyed and it restores health. Cool, but that’s it — there are no other types of potions and no other buffs for it. Heck, you don’t even have a “life steal/life-on-hit” type of stat.

As for exploration and moving forward with Warhammer: Chaosbane‘s narrative, you’ll realize that everything seems moot. Each of the game’s four chapters/acts will have a hub, and every mission would be something along the lines of:

The dungeons themselves become egregiously repetitive and tedious to get through because each act tends to have only a couple of environments or tilesets. Do you want to finish the third act set in Norsca? Sure, just do the mission where you have to go through narrow, snow-covered lanes in a forest. What’s the next mission? Oh, it’s the same narrow, snow-covered lanes in a forest!

As Elessa, I found myself just using her dodge ability to roll past enemies. My goal was simply to get to the next area, complete the quest, and gain experience points to level up. If an ARPG makes one feel that it’s better to just avoid enemies than going “pew-pew,” then something is definitely wrong. 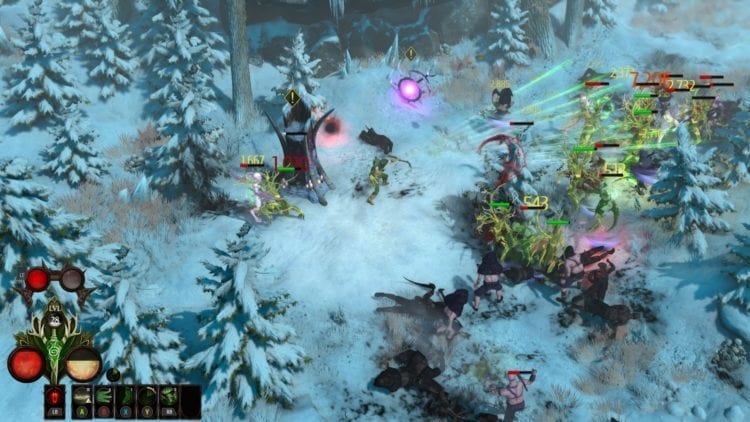 I barely changed my skill choices since the tried-and-tested ones were just too good to pass up. I just like seeing half a dozen angry trees swarm evildoers.

It took me eight hours to finish the four-act campaign and hit the level cap. Surely there must be something to look forward to in the endgame, correct? Unfortunately, it’s as lackluster as the reception to Mannfred von Carstein’s stand-up comedy gig on Neckflix. (He’s a vampire, get it?)

Currently, Warhammer: Chaosbane has the following endgame activities for you:

The gold and fragments you collect are used for the following:

That last one made me chuckle a bit since the skill tree itself feels tacked on, disconnected from the rest of Warhammer: Chaosbane’s gameplay. Rather than being able to assign stat points the way you’d want to (strength, dexterity, and the like), you’re looking at a very simplified and barebones version of Path of Exile or Final Fantasy X‘s sphere grid. It feels like it exists just for the sake of adding depth, without necessarily having that depth in the first place. 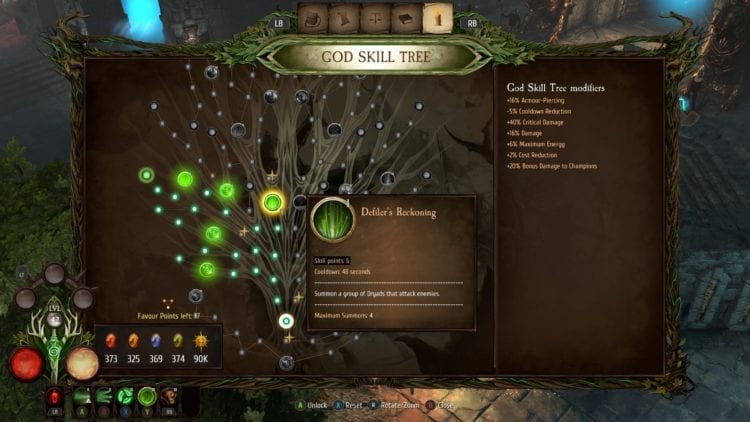 This feels a little unnecessary.

If you were expecting more choices when it comes to item drops, well, feel free to throw those expectations out the window. Warhammer: Chaosbane‘s loot pool and itemization are quite shallow, so you won’t even get your ankles wet. This was something I was concerned about when I previewed the game months ago.

Almost every item is just a “rarer” version of something else, meaning it has an extra stat roll. The only difference would be heroic items which, upon collecting a set, would provide you a nifty new attack and a cool aura, but that’s it.

I was looking for stat allocations from life-on-hit, thorns/reflect, debuff casts, IAS, or anything that might buff a particular attack. There were none. Scrounging for items, and that chase to get the perfect roll for your build, are non-existent. I don’t even know if build theory-crafting and number-crunching, which are expected community activities in popular ARPGs, would be present in Warhammer: Chaosbane. 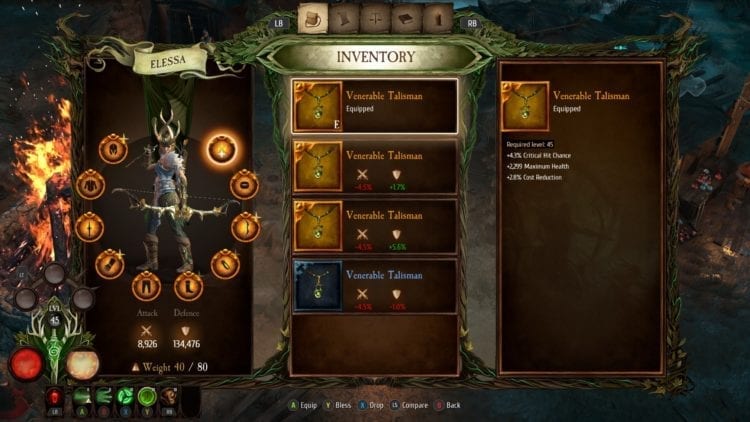 By the way, this is how clean the UI looks when using a gamepad. 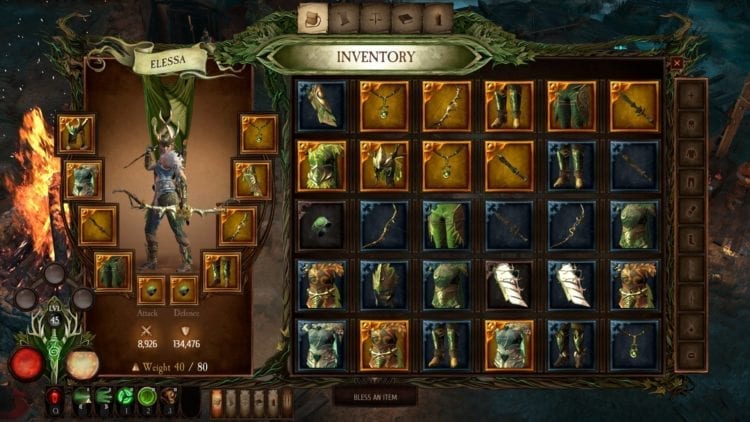 Now, look at all the clutter when you switch to a keyboard and mouse setup.

It’s not all rainclouds and disappointments, though. Truthfully, Warhammer: Chaosbane’s visual effects and monster design are top notch. Spells and skills have that dazzle and “oomph,” and you’ll realize how different they all look and feel.

The enemies you face range from nurglites, ungors, plaguebearers, daemonettes, berserkers, pink horrors, and more. As you can see in one of the above images, there are even some jabberslythes! Also, the boss fights against greater daemons — the Great Unclean One, Bloodthirster, Keeper of Secrets, and Lord of Change — are a wonder to behold. 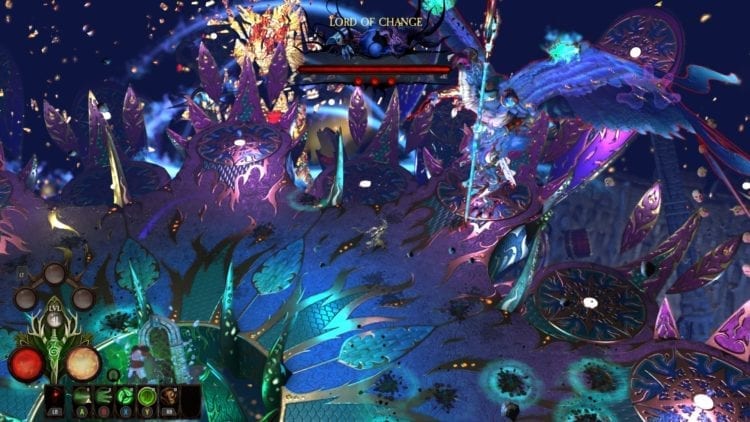 I love farming this guy in Boss Rush mode. Just as planned.

In terms of the technical aspect, there’s also nothing that’s glaringly wrong with the game. Some minor quibbles would be that graphics options can be lacking for PC players, and that I found it more comfortable to use a gamepad than a keyboard and mouse setup. That’s not just due to easier menu navigation (seen in the images above), but also for skill usage and combat. Likewise, there were no crashes, stutters, or slowdowns. Do note that the game automatically starts in windowed mode when you first launch it. Just untick that option so the UI doesn’t look smooshed on your screen.

As for multiplayer, I didn’t try online play but I did test local/couch co-op. You can assign a KB/M or gamepad setup for up to four players. If you’re looking for some weekend dungeon runs with a loved one, then this might be up your alley.

There’s essentially nothing wrong with streamlining and making a game more accessible for newcomers or casual players. Gaming is meant to be inclusive and for everyone. And, yes, maybe I’m being a tad bit critical here. I do like to see streamlined interfaces and mechanics as quality-of-life improvements. But, at the same time, I’d also like to have depth and replayability. So far, Warhammer: Chaosbane cannot provide both.

The problem I do have is that I’m also a long-time ARPG player. These games live or die by how much they can keep you playing and grinding all for the sake of the chase. It’s that elusive god roll, or that final item you need for a set, or maybe just one unique item that complements an unorthodox build or playstyle. It’s something, anything, that makes you feel that your character’s journey (and, therefore, your own as a player) is leading towards something more meaningful.

Maybe Warhammer: Chaosbane will be more engaging down the road, but who knows? We do know that Eko Software will eventually add the Tomb Kings as an enemy faction in future DLC.

It seems fitting since, like a skeleton from Nehekhara, Warhammer: Chaosbane lacks the meaty gameplay to keep you engaged for prolonged periods like a number of ARPGs out there. It’s as though The Butcher from Diablo asked for “fresh meat.” Instead, he got served vegetables.

Warhammer: Chaosbane releases on June 4. Deluxe and Magnus Edition owners get to play four days early. You can check it out via its Steam store page.

Repetitive, meandering, and streamlined to a fault, Warhammer: Chaosbane lacks the depth to keep you invested well past the shallow endgame. It's a shame given the rich lore and enemy design.

Total War: Three Kingdoms will be getting a new game mode