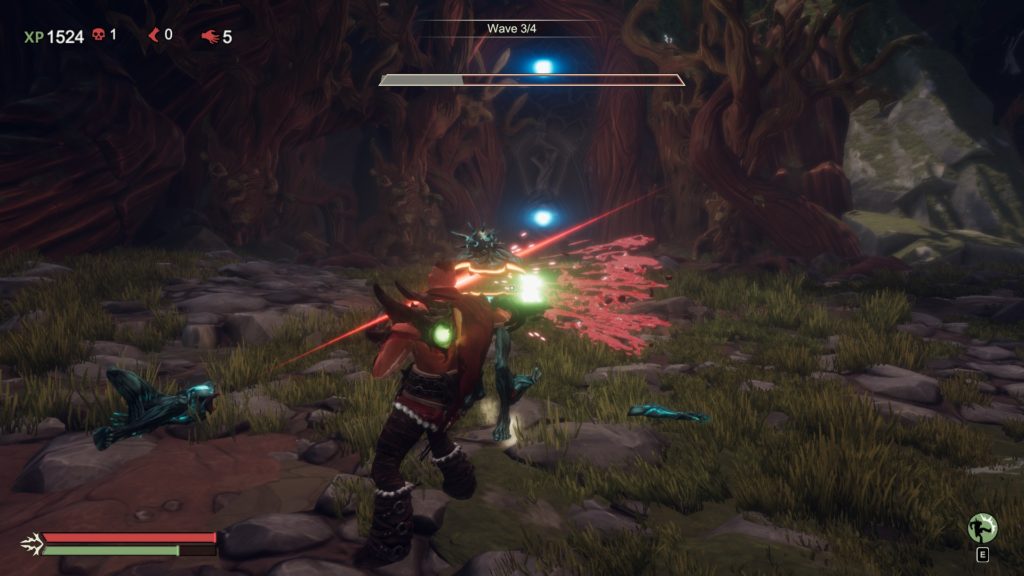 I have a spotty relationship with roguelites. I often feel like the genre is so popular now due to the comparative ease of a small amount of content being repeatedly recycled for hours on end. This can just as easily be leveled at Warlander, a new 3D roguelite based around lightsaber combat.

And even then, Warlander will likely take most players a fraction of the time to see everything as its competitors because it just doesn’t have much in the way of unique content or as many reasons to jump in for additional runs. But the combat is so fun, unique, and clever that I’m willing to forgive many of its issues. If you’ve ever wanted to literally slice through hordes of enemies in a roguelite, here’s your chance.

Warlander tells the extremely generic story of a guy named Bruce whose people are slaughtered by a stereotypical bad guy. Instead of dying along with the rest of them, he’s miraculously revived and greeted by a talking not-lightsaber named…Ferguson. Yeah. With this talking sword’s help, Bruce aims to cut a swath through the enemy army and get revenge for his people. 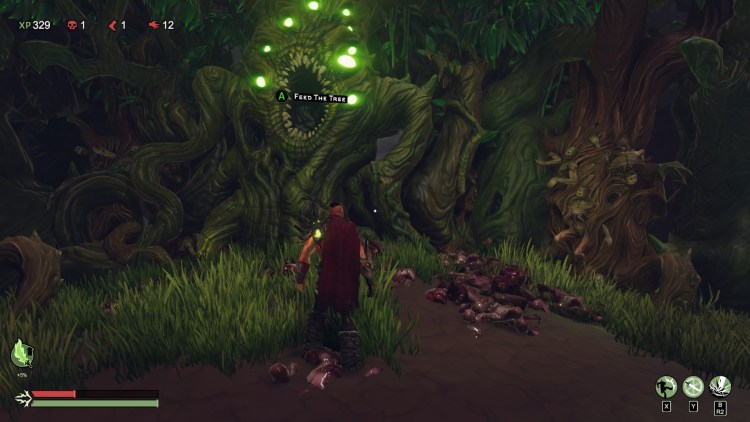 As you can probably tell, the game is by no means plot heavy. It starts with an opening cutscene, but there isn’t much story after that. There are glowing yellow lights you can pick up that add lore to your codex, though. Bruce and Ferguson will occasionally share some banter and the bosses will sometimes have some dialogue attached to them, but you’re free to skip it. If you don’t, be prepared to hear the same few lines repeated ad nauseam.

Speaking of things being repeated ad nauseam, every new run you start in Warlander replays the same intro cutscene and the dialogue that follows immediately after. And that includes the dialogue that Ferguson repeats when you first lay eyes on the tree that you use to purchase skills in each run. It seems strange that the game doesn’t let you just turn these off outright, but skipping them isn’t a problem or anything.

The structure of each run of Warlander is fairly similar to last year’s Slay the Spire. The game’s overworld is made up of a series of nodes that represent level types, ranging from level advancement, combat, and bosses, to those that sell health and power ups. In the beginning, you choose between several starting nodes and go through the randomly-generated path these lead through. 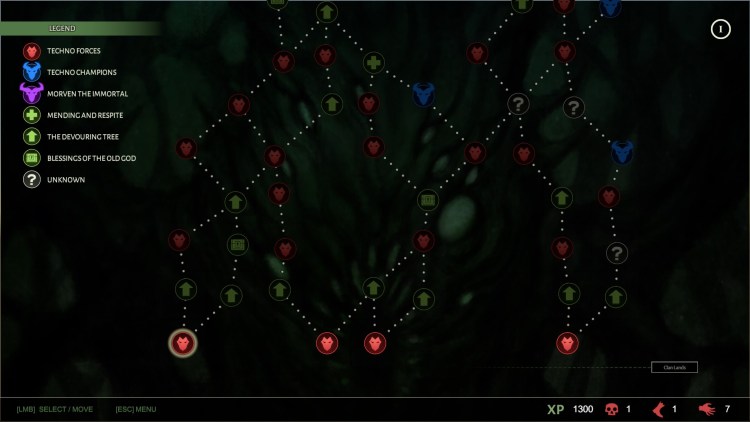 The path you choose can easily dictate how difficult or easy your run is going to be. For instance, a path can have a line of treasure chests in a row, which can make you that much stronger, while another might just be a long string of fights. The combat nodes obviously take much longer, so the length of a run will also vary based on how many of these are in your way.

Of course, in the long run, not hitting enough combat nodes will also prove problematic, as you’re going to want as much experience as possible. Experience is used to purchase skills, which are where the bulk of your strength is going to come from. The issue with the node system is simply that it’s pretty common to get a selection of nodes that just don’t lead to good odds. Because it’s truly random with seemingly no safeguards, you can go a long time without being able to spend your experience, leaving you weaker than you should be, which naturally leads to death.

Do or do not

I’m going to go out on a very hypothetical limb here and say that the thing most people will first notice about Warlander is the lightsaber-esque nature of the combat. Bruce wears Ferguson’s hilt on his back when he isn’t fighting. When he is, though, the hilt grows a long blade of green energy that he uses to slice through foes. And yes, I do mean slice. Much like Metal Gear Rising: Revengeance, this is very much a game about dismemberment. And it’s an extremely entertaining one, at that. 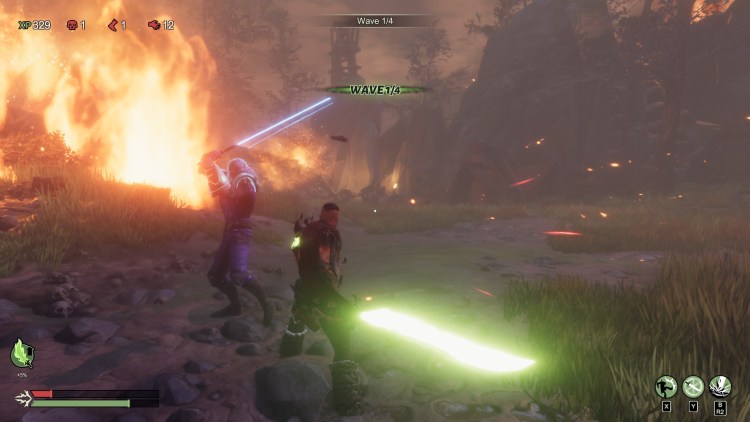 Before purchasing skills, Bruce has four default attacks. He has left and right horizontal slashes with Ferguson or a strong downward slash. The downward slash can also be charged for additional damage. There’s also a sweep attack where Bruce crouches and aims for the legs. Depending on how much health an enemy has, you can hack off their limbs or just kill them outright.

If a weaker enemy runs up on you and doesn’t have head armor, you can decapitate them with a single swing of your sword and kill them instantly. You can also cut off a weapon-holding enemy’s arm and severely reduce the threat they pose. Or you can cut one or both legs off and they won’t even be able to stand, which will allow you to kill them on the ground.

The ground kill is wonky, though, as the animation is janky and it doesn’t always work. Bruce will generally stab the ground to dispatch a fallen foe, but the animation usually misses, so he literally stabs the ground and nothing else. The prompt to do this often doesn’t show up at all when you approach a downed enemy, making it unreliable.

I feel like I need to make it crystal clear how fun and satisfying the combat is in Warlander. You start in an arena and see three or four enemies with lightsabers coming at you. You wait for them to get close. One swings at you, only for you to dodge it, stand up and cut their head clean off. You use a vine to throw one of the others to the ground and impale him. You then use your stakes to shoot the armor off another before removing on of their arms. And then they keep coming. 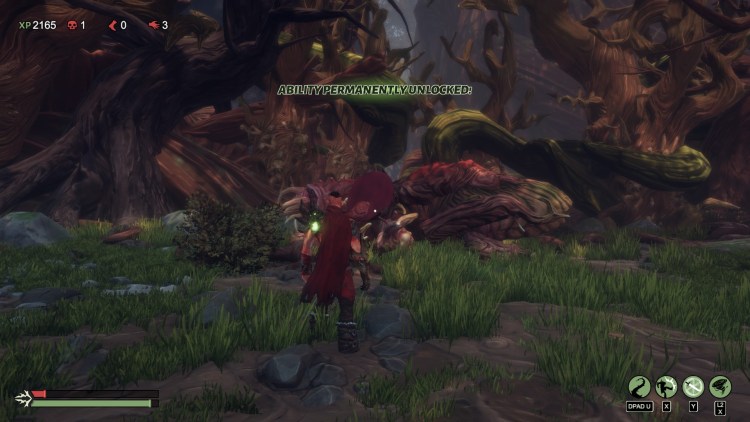 Enemies will occasionally drop healing orbs, but they do so more commonly when you’re low on health. This leads to great moments where you’re just a hit or two away from losing the entire run, only to pull off a last-second decapitation and score a second wind. Some of these combat encounters are undeniably tense. This is the kind of game where you finish off a wave of foes and then exhale, realizing you’d been holding your breath for the last 30 seconds. It’s damn invigorating.

Much like a certain series that won’t be named, Bruce has a stamina gauge. It’s used when he attacks, runs, and dodges. The dodge works rather well, as it’s both responsive and gives a healthy dose of invincibility frames. You can also block with a magic shield Bruce calls forth. Blocking any normal attack will leave an enemy exposed for a moment, which is quite useful. But enemies with glowing swords have unblockable attacks that need to be dodged instead. So, trying to lean too hard on blocking isn’t your best bet.

Every enemy you defeat grants you experience that you use to learn new skills in Warlander. These range from new abilities, such as a vine grip that allows you to grab your foes (or drop them to their deaths); a stake projectile that breaks armor; the ability to throw your sword; or even new moves like a ground slam and spin attack. You can also strengthen your regular sword attacks or greatly increase your health or stamina pools. Once you purchase enough skills, you’ll unlock some especially useful upgrades, such as the ability to steal your opponent’s life during a vine grab or being able to block any attack. 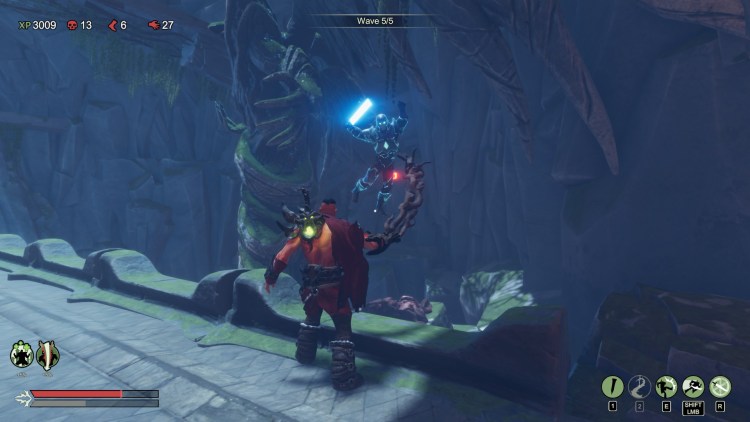 All of these upgrades make you feel a lot stronger, but are certainly necessary as the difficulty ramps up. Towards the latter half of a run, you’re going to mobbed with enemies and the battles will end with the area swimming in their dismembered corpses. Interestingly, enemy parts are Warlander‘s currency. Every time you cut off an enemy head, arm, or leg, Bruce automatically picks them up. You can use these to purchase health orbs between levels. A single health orb can be found in each combat area too, with two being available in each boss area.

The first time you defeat one of these bosses, you gain a permanent skill unlock. For instance, the first time you beat the tree lady boss, you permanently gain the vine skill. At least, you’re supposed to. I’m not sure if this will be fixed at launch, but, in the version of Warlander that I have access to, these permanent unlocks don’t work if you close the game. If you start a new run immediately after a previous death, you’ll retain what you unlocked. But exiting out of the game and starting a new run always led to all of my permanent upgrades vanishing. It’s truly vexing. 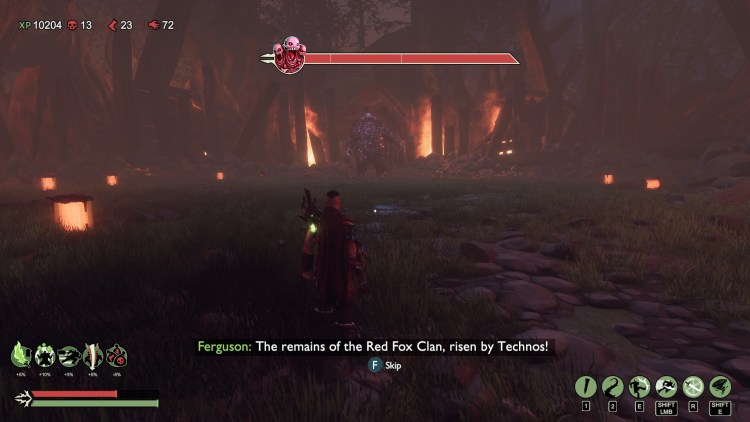 Another annoying thing about the game comes with the territory. When you die, that’s it. There aren’t any chances to come back, which is typical for the genre. But some of the deaths can feel a little cheap. One time I made it one node away from the final boss, only to die to an enemy that ran up next to me while I was fighting a much stronger one. It then promptly exploded and knocked me off the walkway to my death. I wasn’t even mad. Not really.

One of the more curious things about Warlander is that it doesn’t try to have a great deal of staying power. Many similar games will have a slow trickle of unlockable items and a much steeper difficulty curve, but I’d imagine that a lot of people would be able to beat this one in a handful of hours. A successful run can take about 75-90 minutes and isn’t all that difficult to pull off once you get the right powerups. I wish there was more to keep players invested and more to unlock, honestly. It’s also strange that there isn’t an infinite mode for people who just want to fight, as that would be perfect here.

But the combat is an absolute blast. I had so much fun fighting Warlander’s enemies and cutting them to shreds that it made up for some of the game’s shortcomings. The visuals are fairly generic and the character designs leave a lot to be desired, but the levels themselves look pretty decent. For a small indie team, I’d say they did a good job overall, aside from that giant, annoying progression bug. Anyone looking for a 3D roguelite with some unique, satisfying combat should be able to have a good amount of fun with Warlander. 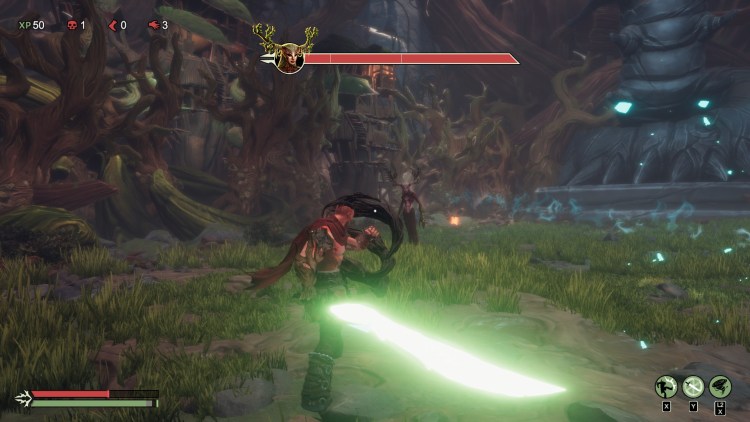 Warlander's visuals and story are generic and it's a bit short on content, not to mention the irksome bug that removes your permanent upgrades. But the combat and cutting mechanics are extremely entertaining breaths of fresh air that make the game very much worth playing.