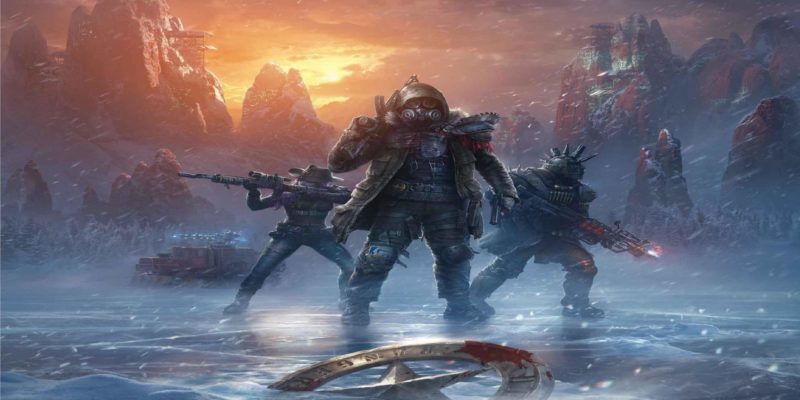 During the holiday season, I considered Wasteland 3 as one of my most anticipated games of 2020. Last week, I was able to get a glimpse of the first few hours of the game. I also had an opportunity to speak to inXile Entertainment’s CEO and the franchise’s creator, Brian Fargo. Here are some first impressions. 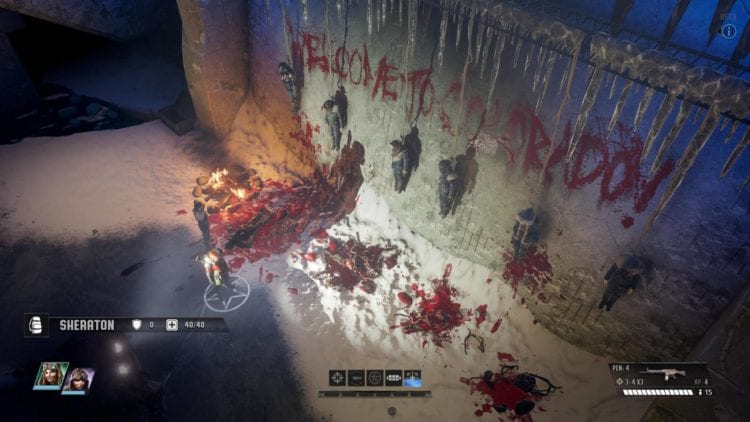 The first thing I noticed was that Wasteland 3 only lets you create two characters at the start compared to an entire quartet in Wasteland 2. Some of them did have an additional backstory such as a punk duo or even a father and daughter team. According to Brian Fargo, things will still “play out similarly” whether you made a new duo from scratch or picked the ones with a set background.

Of course, series fans will remember how you assigned attributes, skills, and even some hilarious perks; the Wasteland series, after all, is partly known for its humor. Some light-hearted references here and there help bring levity in its post-apocalyptic setting. You’ve got perk examples such as “Explodomaniac,” “Money Bags,” and “Goat Killer.” 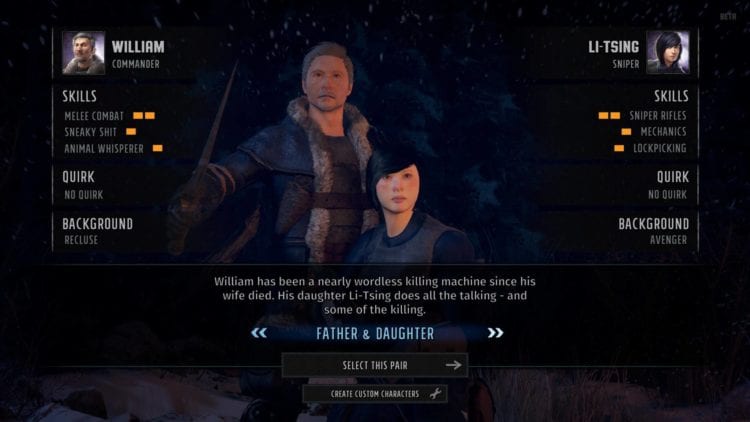 The game also uses Wasteland 2‘s CLASSIC system for attributes (Coordination, Luck, Awareness, Strength, Speed, Intelligence, Charisma). The main difference I noticed was that things felt more streamlined this time around. For instance, Wasteland 2‘s system had combat speed and action points determined by multiple attributes. In Wasteland 3, however, mechanics are governed by a specific stat — ie. combat speed and initiative are assigned to Speed and action points are solely dependent on Coordination.

I actually welcomed this change since it simplified matters and, as Brian Fargo had mentioned to me, Wasteland 3 will have “even more depth in tactical combat than previous titles.” To me, it was like getting the attributes out of the way so players can focus on the core gameplay itself. Fargo also noted that there will be a lot to delve into such as “deployable items, three times the number of armor pieces, and more.”

I did wonder why the free attribute points were lower this time around (14 compared to 21 from Wasteland 2). I was worried that my 2/1/4/1/6/6/1 build won’t cut it. Still, I was assured that the team at inXile was still working on a perfect amount of points to settle on. “We’re still tweaking the numbers based on player feedback,” Fargo said. 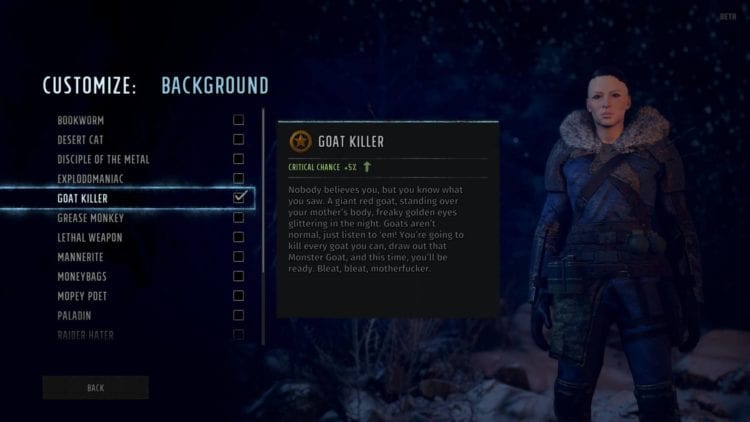 The frozen wilderness of Colorado and Ranger HQ

Wasteland 3 takes place after the events of the second game. As fans know, the ending led to the destruction of your Ranger base in Arizona. Survivors are sent to the frozen wilderness of Colorado after an enigmatic figure known as The Patriarch promises to aid the Rangers with supplies. The catch? You’d have to put his wayward children back in line.

“Colorado is an interesting setting for Wasteland 3,” Fargo said. “That’s where NORAD is located and there are a lot of survivalists there.” I guess the burly, hammer-wielding Patriarch is also an ideal leader to have given the grim situation, a character inspired by hardy folk in a world gone to hell. 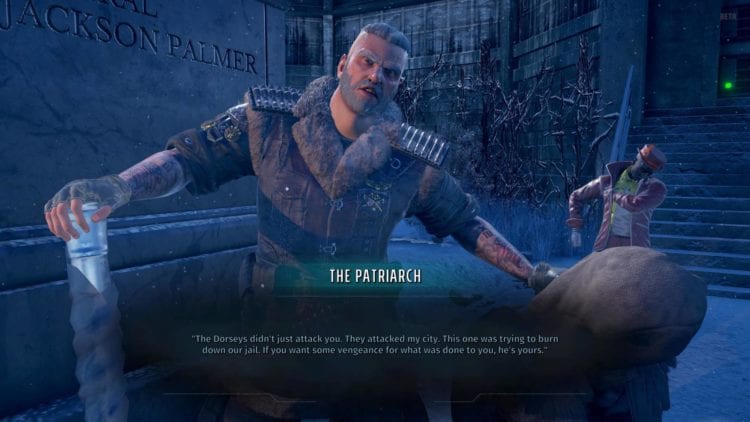 Then again, The Patriarch’s true motivations remain a mystery, as do the ideals of the various factions in Wasteland 3. There are several such as the Hundred Families, the elites of Colorado Springs, and the Patriarch’s Marshals, his own police force in the city. Although I didn’t meet their members in the preview build, there’s also the faction known as the Gippers which is described as a heavily-armed cult in Denver that’s devoted to the “god-president” Ronald Reagan.

Players can expect to interact with these Wasteland 3 factions and decisions will affect respective standings. There’s even the handy Fame & Reputation panel that gives you all the info about how these factions view the Rangers: 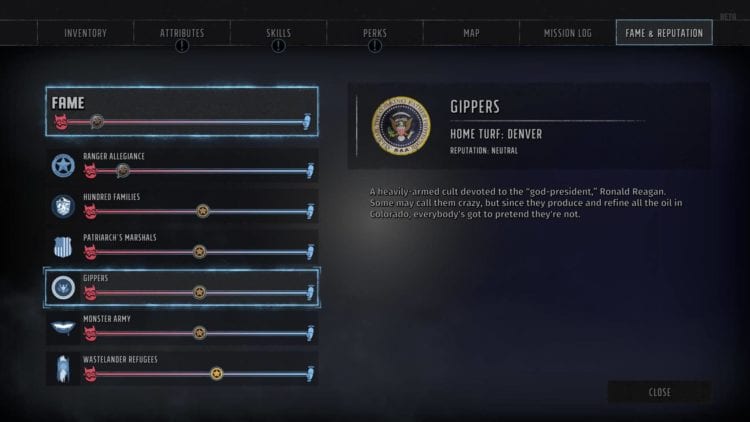 Speaking of the Rangers, the initial incursion into Colorado doesn’t go as planned. An ambush cuts down dozens of soldiers and it’s up to you to make it to The Patriarch’s domain. Once you do, he hands you the keys to your new Ranger HQ. Just like that, you’ve now got a forward base.

You then get to create more custom Rangers. That’s right, your party can now have up to six characters (four custom-made characters and two companions). 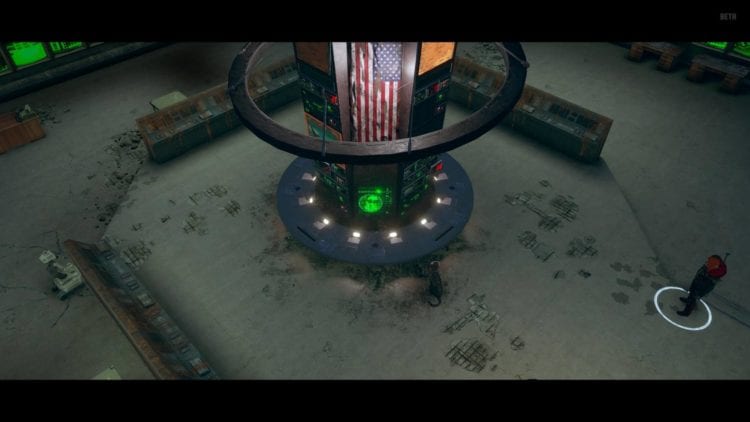 Going back to creating your starting duo, Fargo explains the decision succinctly: “We didn’t want new players rolling three or four characters right off the bat. We want you to get into the game first, but you’ll get to have more people in a very short amount of time.”

In addition to the above, your Wasteland 3 party now has a shared inventory, no more swapping back and forth multiple characters just to see who might’ve accidentally looted an item. According to Fargo, this change was made “to remove the parts that weren’t fun.”

“Searching through everyone’s inventory was something people didn’t enjoy,” he added. I wholeheartedly agreed since inventory management was one of the clunkier aspects of previous titles. 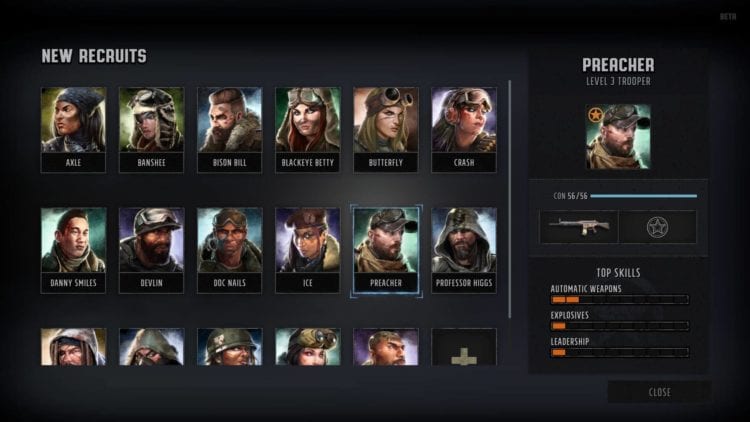 In terms of combat, the most noticeable change in Wasteland 3 is that all characters can now be used within the same turn; no more alternating between one character and then an enemy depending on your initiative stat. As such, you’ve got all the time in the world to plan your tactical engagement be it running in with guns blazing, opening up with grenades and explosives, repositioning your characters first, or using certain options that can help you in a pinch. The environments and effects look decent as well, and this truly feels like Wasteland for the modern generation. 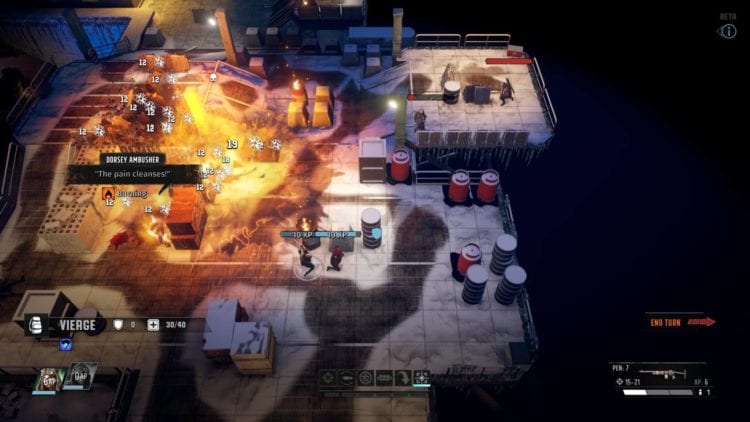 One key factor in your Wasteland 3 journey would be the Kodiak. This is the vehicle that you’ll use to traverse the snowy landscapes on the world map. According to Brian Fargo, you won’t need to worry about collecting resources in Colorado (unlike in Wasteland 2 where you had to find water). For a while there, I was concerned that players would need to find stockpiles of oil just to keep the Kodiak running.

In any case, the Kodiak does become usable in some fights. The first level against the ambushers lets you use one of its lethal explosive attacks, clearing out an enemy squad and destroying a walker bot. 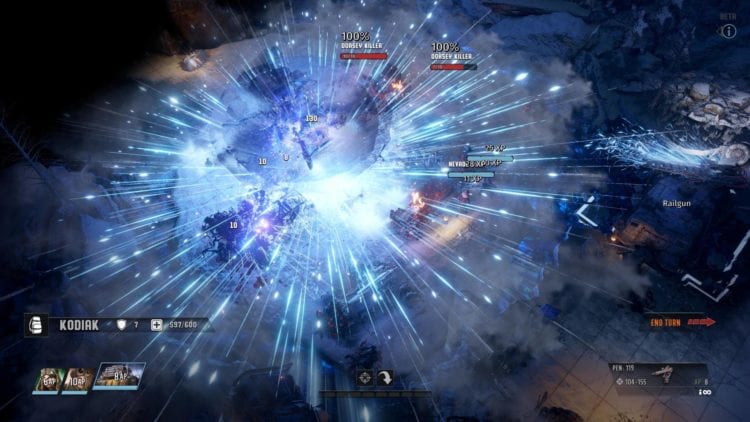 In terms of storyline decisions, as mentioned earlier, your choices will impact how factions view your team. Some of these have ripple effects that can be felt within a few minutes, while other repercussions will only be seen after several hours.

One important decision I had to make during the preview was how to deal with Isaac Reed. He’s a scion of one of the Hundred Families and the lover of one of your companions, Lucia Wesson. Unfortunately, he also ended up helping the ambushers commit a massacre of innocent folk, including Lucia’s family. He regrets his decisions, but will you come to regret your own? 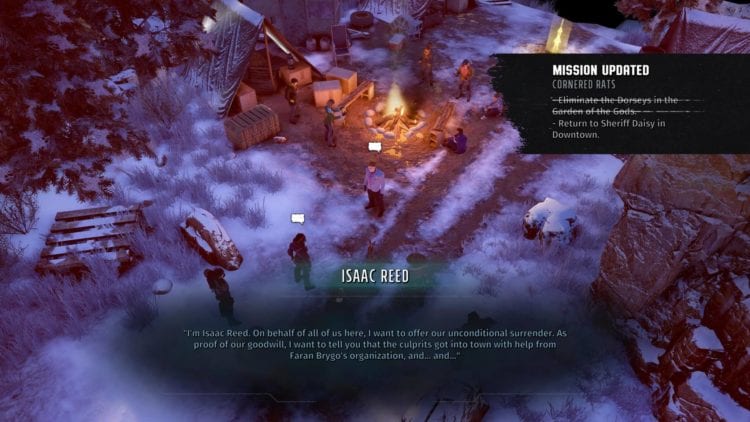 There are multiple decisions and outcomes that are possible here: 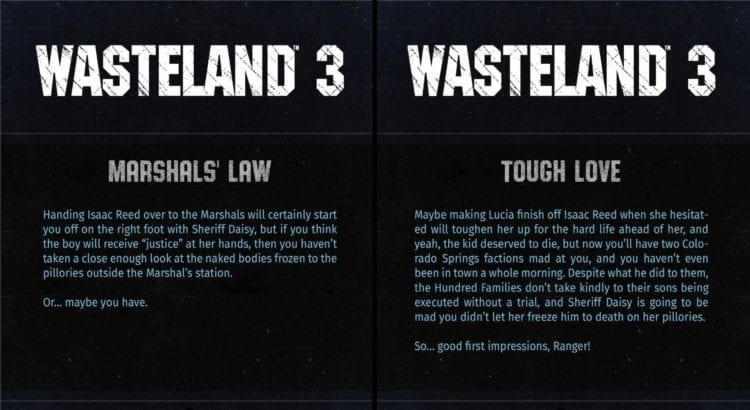 The decisions you make in Wasteland 3‘s storyline can be quite compelling and full of depth, but multiplayer might just take it up a notch. The online co-op aspect in Wasteland 3 features a means of having a shared campaign with your buddy, one where you’d get to experience the decisions that the other has made. There are, however, a few rules such as not being able to kill the other player. “You could do fun stuff like throwing a stink bomb, but killing the other player permanently wouldn’t be allowed,” Fargo added.

Knowing that Wasteland 3 is set for release in a couple of months, I was also concerned about how the developers at inXile were doing especially with the coronavirus outbreak. As Fargo noted, “We already have systems in place and many of our staff members are used to working from home.”

As for the effect of Microsoft’s acquisition, Fargo couldn’t be any happier. “We’re already working on a new IP and we have other games in development.” When I asked specifically about more Wasteland games and spinoffs (ie. Wasteland: Frost Point), and whether Microsoft was suggesting a certain direction they should take, Fargo replied that Microsoft was fairly hands-off.

“They don’t nudge us [with regards to the game’s direction]. It’s always up to our creative team,” Fargo said. “We’d love to do more Wasteland games and it definitely won’t take us decades to make the next ones. However, we’re definitely not going to release one product every year and Microsoft isn’t telling us to do that either.” 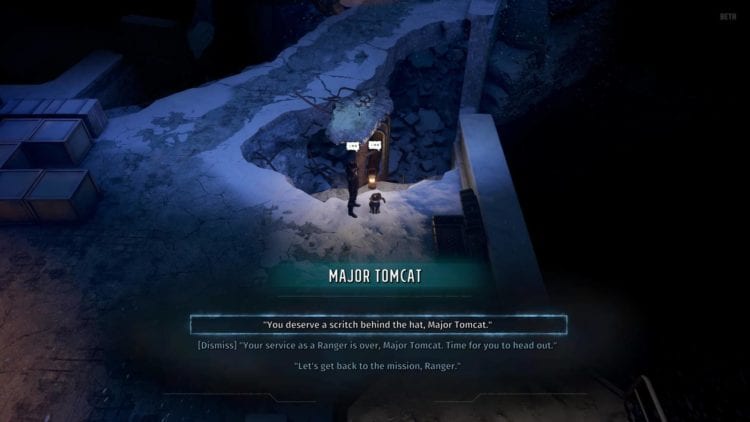 Overall, the Wasteland 3 preview definitely kept me intrigued at what the future holds. I loved the changes to combat and the streamlining of certain concepts, and the branching narrative where your choices mattered kept me invested. Here’s to hoping that the finished product truly delivers.

Upcoming Path of Exile: Ultimatum update wants you to risk it all