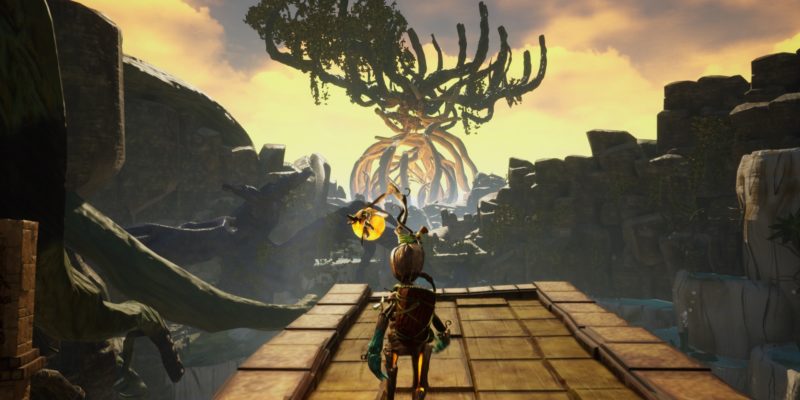 Ever since Ico set the trend in motion, video games have had a strong proclivity for companion-centric stories. This brand of enacted storytelling has captivated players the world over, giving them the starring role as the glue that holds friendships together. Teamwork and togetherness, two characters covering for each other’s weaknesses — the medium just can’t get enough of narratives like these.

Sapling studio Punk Notion is the next to step up to this plate with Weakless, the story of two tree-like beings (called Weavlings) on a quest to protect the Tree of Life from corporate interests. Like all companion tales, the game lives and dies by both its characters and the synergy between the pair. For this pairing, we first have Blind, whose incredible strength and musical talents are offset by their slow speed and vision loss. Then there’s Deaf, agile and artistic, but unable to hear. Yet despite their names, it’s Blind’s strength and Deaf’s agility that matter most in their journey. Their impairments matter more for the overall audiovisual aesthetics than the gameplay.

See the forest for the trees

All was quiet in the woodlands until the machines invaded, bringing with them corrosive rot that threatened to diversify its lackluster color palette. The Weavlings’ forest is lush and drenched in green — appropriate for its pair of protagonists, but not favorable for Weakless‘ gameplay. Between difficult-to-spot objectives, awkward colliders hindering traversal, and a less-than-stellar soundscape, the duo’s sightseeing trip is littered with small annoyances.

The rot itself, which is lethal to Blind and Deaf, is ironically difficult to detect. Its slow bubbling and muted tone make it something of an invisible killer. But despite its prominence in the game’s narrative, it’s nothing more than a mild inconvenience to players, barely present throughout the game. 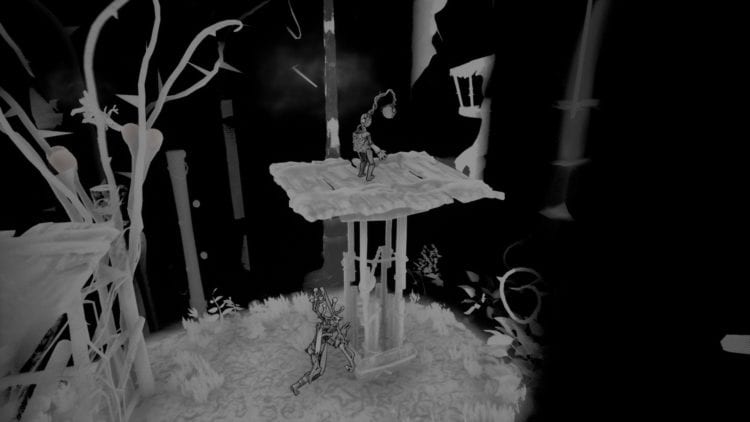 How Blind experiences the world.

What makes the experience of exploring a touch more interesting is Blind’s Daredevil-esque echolocation. From their perspective, the world is cloaked in an achromatic blanket revealed by sound. Blind can tap their staff to temporarily expand their field of vision, and they can detect noisier creatures and objects with relative ease.

Deaf, on the other hand, doesn’t quite live up to their name. Playing as Deaf, all noises produced by the two are muted, but the environment and all interactions continue to make noise. In fact, I didn’t notice the lack of footsteps until the final moments of the story. Even then, I couldn’t recall a single instance in which this had gameplay implications – not even musical puzzles, as you can only interact with those using Blind’s staff anyway.

Weakless has plenty in the way of unique aesthetic choices, but their purpose as it pertains to puzzle-solving is superficial at best. Blind is blind and Deaf is deaf, but never do those differences come into play. You can still very much see, and you’ll have no issues hearing what’s important. And while the invading rot and machines are supposed to be the primary threat, they account for virtually none of the obstacles. 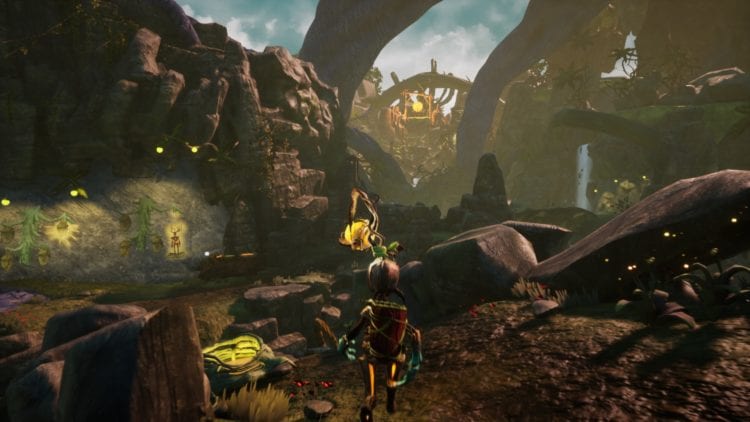 Weakless is short, clocking in at just about two hours. It has a myriad of puzzles for Blind and Deaf to solve, though many feel uninspired and simplistic. While the game totes its interesting ideas as selling points, its puzzles fall back on the absolute basics. Most involve cycling between the two characters – you interact with an object as one, then switch back to cross a now-cleared path with the second. This trend persists throughout, with very little development. It makes for an incredibly slow two hours.

Deaf is most often tasked with climbing up to areas inaccessible to Blind, or with using their bulb to coax blockades of greenery out of the way. Meanwhile, Blind’s musical prowess and wooden staff lend themselves to Weakless‘ musical puzzles. But even in its most interesting puzzle, you’ll find the solution through trial-and-error rather than deliberate strategizing. In that instance, the game shows you a sequence of images representing numbers, and you must decipher their meaning to determine which points to tap on an over-sized steelpan instrument.

Due to the nature of the puzzles, you’ll often find Deaf leading the way, with the slower Blind in tow. But due to that same nature, Blind will often be left behind, forcing you to backtrack to grab them. Many obstacles run on a timer, too, and Blind is often lacking in punctuality. Luckily, frequent checkpoints mean you can reload the game to bring the duo together again. But this is, of course, not a preferable fix. 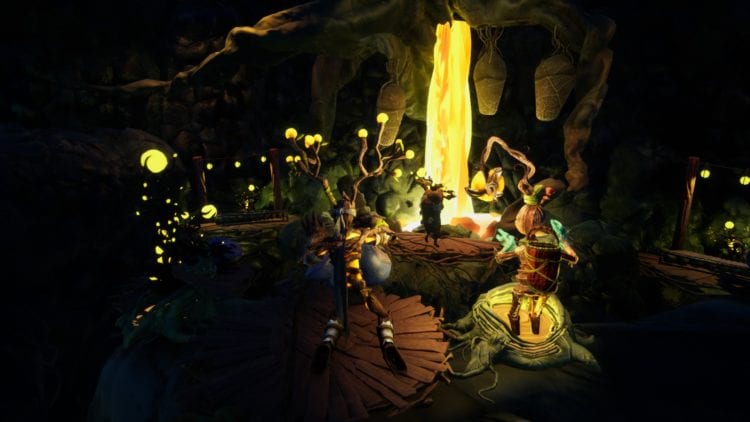 A flower that never blooms

One-off puzzles punctuate the game’s latter half, asking a little more from the player than the standard song and dance. As an added bonus, they’re less prone to the frequent bugs and oversights that plague the rest of the experience. It’s here where Weakless attempts to integrate Blind and Deaf’s trademark traits, but, as expected, it does so to little effect. In truth, those traits are best highlighted by periods of downtime interwoven throughout the game. The woodlands are home to a host of hidden instruments and painting sights for Blind and Deaf to interact with. These cute collectibles are stored in Deaf’s personal art journal, which players can check at any time.

And as with these collectible oddities, the loose story that unfolds as you play is virtually inconsequential. For as much inspiration as Weakless draws from companion games, it takes an equal amount from flow-centric adventures like Journey or Abzu. As you traverse the world, magic theaters tell the desperate tale of a forest under attack. But its pacing greatly suffers under the weight of slow, disorganized puzzles. 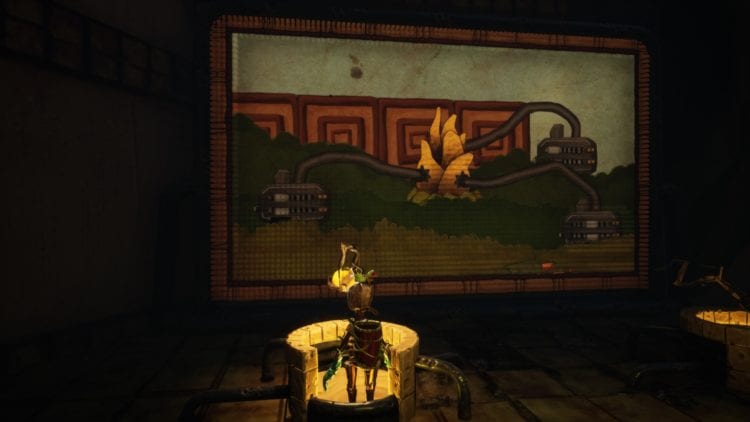 They really have cable everywhere these days.

Like many of Ico‘s descendants, Weakless tries its hardest to capture the growing bond between two unique characters. And while the two leads certainly are intriguing, time and time again, the puzzles only serve to sever the connection that players hoped to have with them. Sadly, the game’s potential goes unfulfilled thanks to superficial explorations of its most interesting concepts, best captured by its banal puzzle-solving.

Weakless's muddled execution soils the seeds it sowed with its captivating concept. The friendly dynamic between lead characters Blind and Deaf is underdeveloped, courtesy of undercooked mechanics and puzzles.