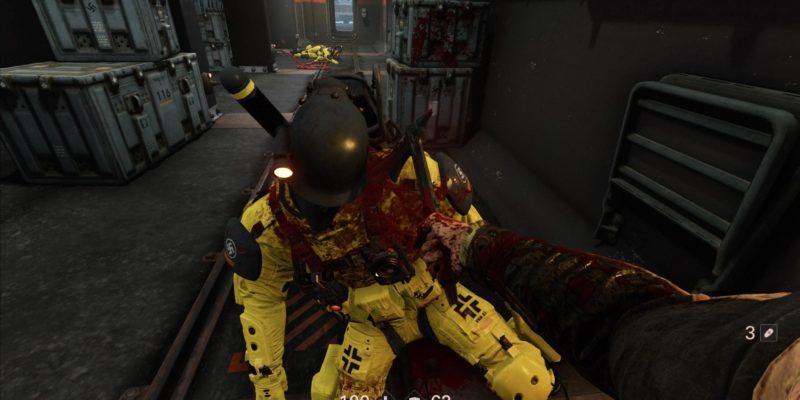 Playing Wolfenstein 2 alongside dipping into some of October’s other releases has been a weird experience. This is primarily because, like its predecessor, Wolfenstein 2 goes beyond what you’d necessarily expect from it.

The recent Wolfenstein games are essentially a reboot of a series in which the plot, story, and setting can all be boiled down to “shoot a bunch of Nazis.” To grab something from the last few weeks to compare it to, Destiny 2 is from a studio somewhat renowned for having a huge, complex, overarching mythos in their games. One of these two games is really well-written, with enjoyable characters and situations, and some surprising twists and turns (assuming they’re not spoiled in trailers, anyway). The other is… well, let’s be polite and say the writing is “usually competent”.

The well-written one is not Destiny 2. 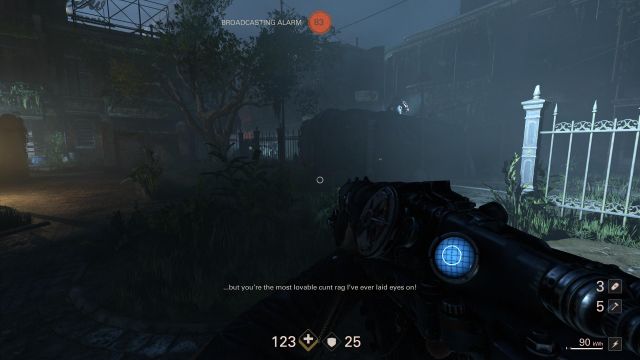 Also, really good swearing if you go for the Fergus timeline.

I can’t really overstate how much I enjoy the writing in Wolfenstein 2 (or how much distaste I have for the writing in Destiny 2, but I’ll complain about that another time). It pulls off the Borderlands trick of balancing on a knife-edge, managing over-the-top Nazi blasting and ridiculousness and comedy, alongside introspective and genuinely dramatic moments.

It uses stereotypes to give you a basic grounding on characters, and then surprises you with considerably more depth should you bother to listen to all the incidental conversations taking place in the submarine hub area. It doesn’t always work, but by and large it manages to craft a larger-than-life cast of characters – both likeable and utterly detestable – and hurls some interesting problems and tragedies at them to eke out development and drama. This won’t be much of a surprise to those who played The New Order, considering that did much the same (and the direct continuation of Wolfenstein 2 means that some familiarity with its predecessor is advised) but it’s wonderful to see.

Familiarity with The New Order also offers up a good amount of familiarity with Wolfenstein 2, because in terms of core mechanics, it basically plays the same way. You traverse the majority of levels in a linear way, with a mix between corridors and big rooms and wide open areas, and either shoot or sneak your way past Nazis and Ku Klux Klan members and giant robot dogs. 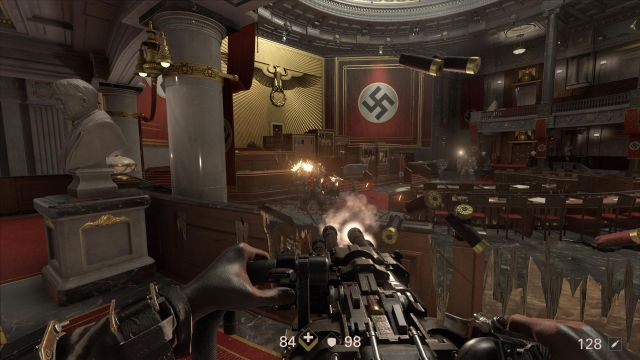 The “shooting” option being excellently chaotic.

Stealth is indeed possible and while it’s the “stronger” of your two options (allowing instant kills on enemies that would otherwise be bullet sponges), it’s also by far the more difficult. The likeliest outcome is that you’ll start off stealthily, pick off a few enemies with joyously gruesome takedown animations, and then switch to going in guns blazing, because you’re almost certainly going to get spotted before long. Stealth isn’t overly forgiving.

Still, at least attempting stealth is often the wisest choice, as going in guns blazing from the the start can cause problems. Enemy types called Commanders can call in reinforcements, so picking them off as soon as possible is crucial if you don’t want to fight wave after wave of foes.

Both in and out of stealth, though, you have options. Upgrade kits are scattered around the levels, each of which let you unlock one upgrade on one weapon, and two weapons have silencers as options. Other options are more directly combative: bigger magazines, more damage, a scope that turns your assault rifle into a semi-automatic sniper rifle, or grenades that generate electromagnetic fields to shut down enemy electronics. 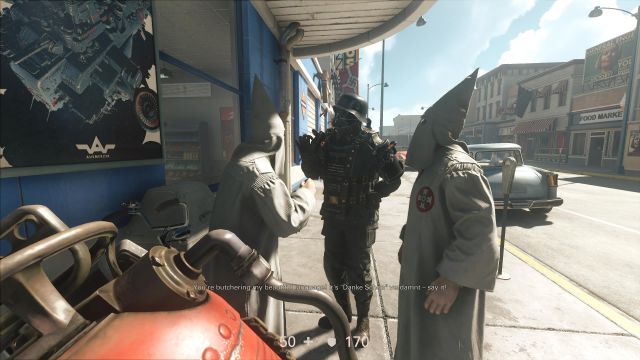 More scenes like this, actually seeing the bits of Reich-ified America that aren’t warzones, would’ve been nice.

Neatly, there’s also a perk system that offers bonuses based on your playstyle; achieving particular feats gets you permanent upgrades that relate to those feats. Getting headshots increases your aim-down-scope accuracy, while stealth kills increase your crouch movement speed. No matter how you play, you’re rewarded for it in the form of tangible benefits that improve that style of play.

And when you do inevitably get into a shootout, the gunplay is generally excellent. Honestly, a bunch of the weapons feel a little weedy to my liking, but this is largely to balance out the raw damage you can dish out by dual-wielding whatever the hell you like. Put an assault rifle with the armour piercing upgrade in one hand and a sub-machine gun in the other hand, and just run at people. Alternatively, just go for akimbo automatic shotguns and murder the living fuck out of everything. (Wolfenstein 2 has very, very good shotguns.)

Choice, then, is the (new) order of the day. This actually extends as far as the sodding intro, where you get to revisit a bit of The New Order and determine which character survived. This, too, changes a surprising amount: while the levels and gameplay remain the same, it replaces one weapon in the game and changes a whole lot of cutscenes and dialogue to reflect the alternate character. It’s not a case of “the same cutscenes with slightly different dialogue”, but different ones. So, hey, some replayability. 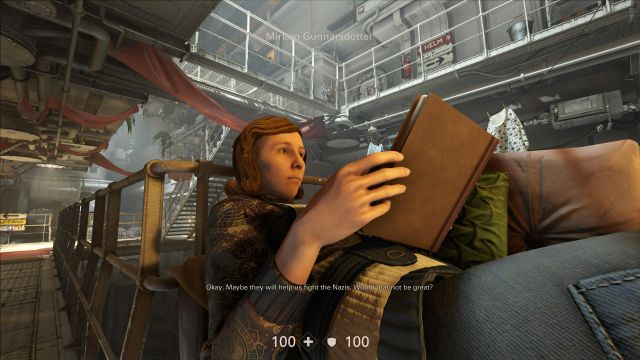 I’m pretty sure that, if you look like that, you may actually be dead.

Most of the complaints I have about Wolfenstein 2 are honestly pretty minor. The way it mimics eye exposure is kind of annoying (standing in a brightly lit area means you can’t see anything in darkness), and with the American setting, I’d have liked more bits in populated cities rather than a few destroyed areas and a bunch of Nazi outposts. I have quibbles with the range in which you automatically pick up items, and wish it was a bit wider. Conversations with non-major characters tend to be horrifying experiences with unblinking mannequins. And while some mid-game upgrades purport to give you different routes through levels, this is only used on occasion: most of the time it’s just a case of finding a different type of door to get you through to the next bit.

One thing that I feel is genuinely problematic, though, is the game’s obsession with collectibles, most of which are hidden really rather well. “Just ignore them,” you say! And this is certainly a thing you can do when it comes to Star Cards, albums, and gold, and – to a lesser extent – the newspapers, postcards, and documents that flesh out the world and the characters. But it’s a lot harder to do with the aforementioned upgrade kits, which are often quite cunningly hidden. This stuff isn’t highlighted on screen overly well and only sometimes appears on your map (and will erroneously highlight ones you’ve already picked up, if you found them before they were added to your map), and scouring a cleared area for things you missed is a bit of a pace-killer when you want to get on with sneaking and shooting your way through more Nazis. 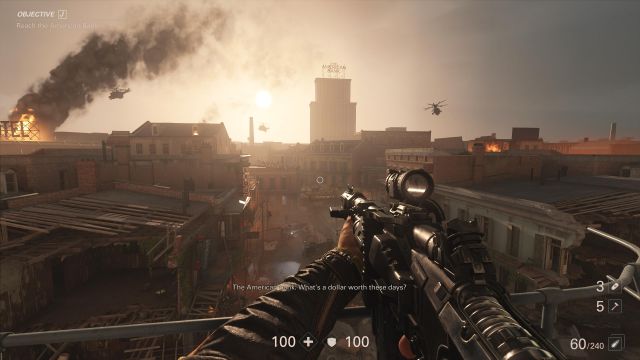 The warzones are really bloody pretty, mind you.

The other problem is one that’s somewhat unfair: it’s not as fresh or astonishing as The New Order. In most ways, it’s just as good as that game; in some ways, it’s better. (In one or two ways it’s not quite as good: the plot is a little weaker, but that’s balanced out by some fantastic character moments.) But The New Order‘s quality was a genuine surprise to me, and Wolfenstein 2 being a really enjoyable single-player shooter with really excellent writing is less “Wow, this is great” and more “Okay, so this is great too.”

But that shouldn’t dissuade you at all, because it is great. I played through the campaign once, and then played through bits of a second campaign to see the other timeline changes. I still haven’t done all of the bonus Enigma Code missions that send you back through previous stages with new enemy layouts and new things to find. I’ve played about 15 hours, and despite some weaknesses and minor complaints, I enjoyed pretty much all of them. Wanna shoot, stab, and otherwise viciously maim Nazis for a good cause, while enjoying some really good characters? Wolfenstein 2, ladies and gentlemen. 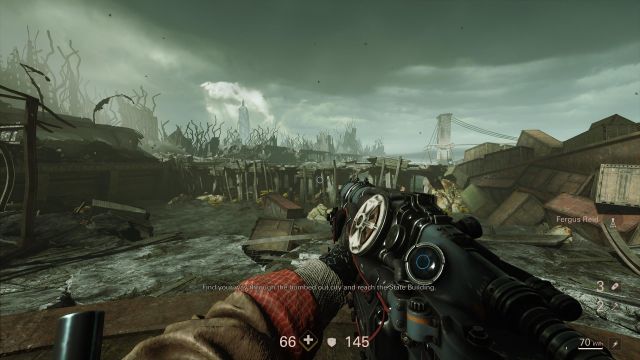 Wait. Shit. Have I accidentally been playing Fallout 4 again this whole time?

Not as fresh as its predecessor, but a really well-written single-player shooter with plenty of options and plenty to do.