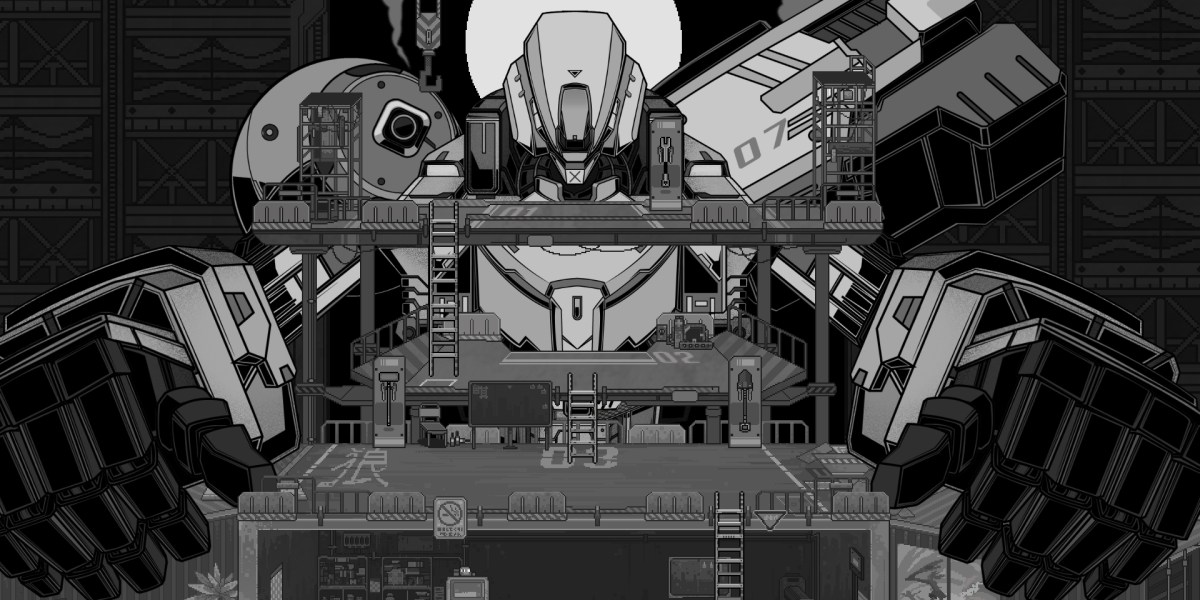 Wolfstride is a narrative-driven, mech-battling anime adventure that features an excellent cast with a mysterious backstory. It’s also got a whole lot of attitude. Sometimes it feels more like reading manga than playing a game. And this is wonderful, because the character interactions are superb. But sometimes they can get a little preachy, and all you want is to just hop in your giant mech and smash some metal faces.

Wolfstride has a Cowboy Bebop feel about it. Even the main character, Dominic Shade, has a strong resemblance to Spike Spiegel. Spike’s confident approach to endeavors and gang-related past are all present in Wolfstride’s antihero. However, where Spike is a warrior who isn’t afraid of a fight, Shade gets his hands dirty in another way. He’s the money man.

It’s a thankless job, but somebody’s got to do it. You’ll spend a large amount of your time in Wolfstride trying to earn cash to fund your team’s dreams of being mech fighting champions of the world. But don’t worry, you get to control the mech in the fights too.

Wolfstride has a lot of the right ingredients for a highly enjoyable experience. The turn-based tactical mech battles are fun and entertaining, requiring you to think strategically about your position and the abilities you use. Building your mech to defeat your various and varied opponents is challenging and rewarding. One build does not suit all, which is good. Plus, the bombastic characters are entertaining, and their voice acting is top-notch. The delivery of lines is truly excellent, and the characters do a lot to carry the narrative. 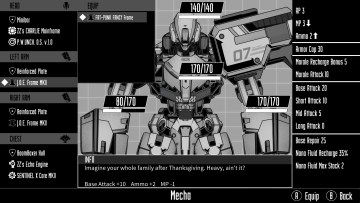 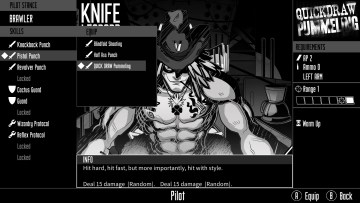 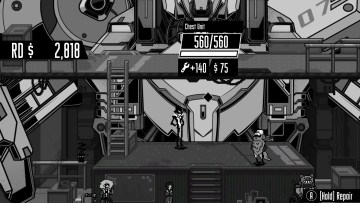 However, there are some annoying bits early on. I enjoy it when a game eases you into the combat system, offering some leisure battles before the true test. Wolfstride does the opposite. It’s impossible to win your first couple of fights. You learn very little, and may get annoyed with the song and dance that you know is heading towards defeat.

The pacing of the early game is also poorly done. There is a lot of unenjoyable, repetitive busywork that needs to be done before getting into the good stuff. Far too much; it’s a slog to get through. And that’s a shame, because once Wolfstride hits its, well, stride, it’s very good. So, persevere, as it’ll be worth it soon enough.

After getting spanked by the fourth opponent, I spent a few tedious hours riding a bicycle between obstacles for minuscule payloads just so I could afford better parts for my mech. As far as effort vs. reward goes, the balance here was way off. But once you defeat the fourth opponent, who goes by the name Heart, suddenly you have access to a couple more minigames and collections. These will help you earn cash a lot quicker. And that makes the game a lot more enjoyable. 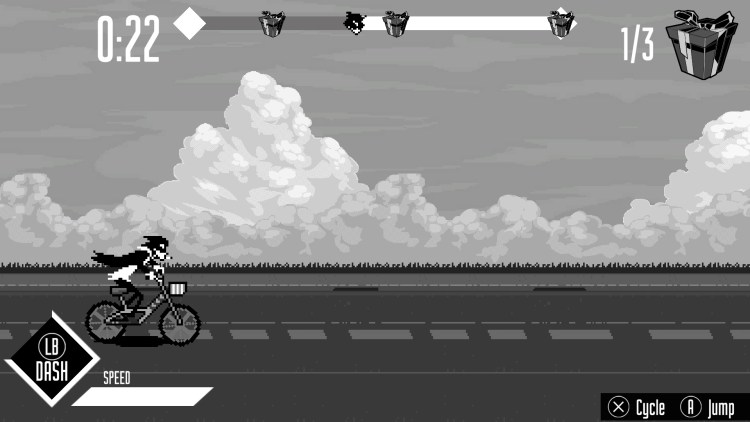 The three main characters are a dysfunctional team. There’s Shade, the manager and money man who you spend most of your time controlling. Next is the dog mechanic who enjoys his beer. He’s called Duque. And then there’s the happy-go-lucky pilot of the mech who has the most amazing name of the lot, Knife Leopard. But for some reason, they don’t call each other by these names. Shade calls Duque ‘the Wizard.’ Duque refers to Shade as ‘Catman.’ And they both call Knife… ‘Pineapples.’ It’s bizarre and very confusing in the early stages of the game. But Wolfstride is a wild ride. If you get on board with its craziness, you’ll love it.

You’ll soon learn who’s who. And your team will grow as you’re joined by more thoroughly entertaining characters. There’s a pigman and his nephew, an old woman who’s a mechanical whiz, a very annoying (but sometimes funny) robot, and a young girl who has a father-daughter relationship with Shade — but they’re not really related.

As I progressed in Wolfstride, I slowly learned more about the different personalities and their troubled pasts. And I grew fond of the bunch of misfits. Particularly, Shade, who seems very unlikeable at first. But give him a chance. He has a good heart, and he’s trying his best. 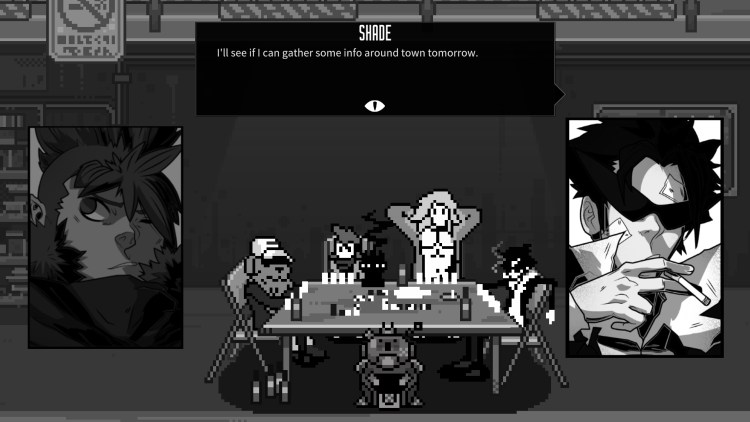 There are a lot of tough battles throughout the game, and these are by far the most engaging. To win a fight in Wolfstride, you need to destroy the chest section of the enemy mech. Conversely, you lose if your chest piece is destroyed. The battles that I liked the most were the ones that caused my mech all manner of problems while I was trying to quickly work out a strategy to beat the giant hunk of metal slamming away at my limbs. When you’re forced to seriously consider your movements on the board, the body parts you attack, and how to defend your mech, the combat is fantastic.

The Underground mech battles that become available to you in the middle of the game are a particularly tough, but enjoyable challenge. And the rewards from defeating each opponent are excellent. However, I was a little disappointed with some of the final tournament fights. Too straightforward, going the first route and taking out the enemy’s body first was often the easiest thing to do.

Not that I was entirely put off by these walkovers. I saw them as affirmation that I did an excellent job equipping my mech with the right parts and my pilot with a winning set of moves. I just enjoyed the challenges so much that some tougher puzzles at the end would have made the finals more rewarding. 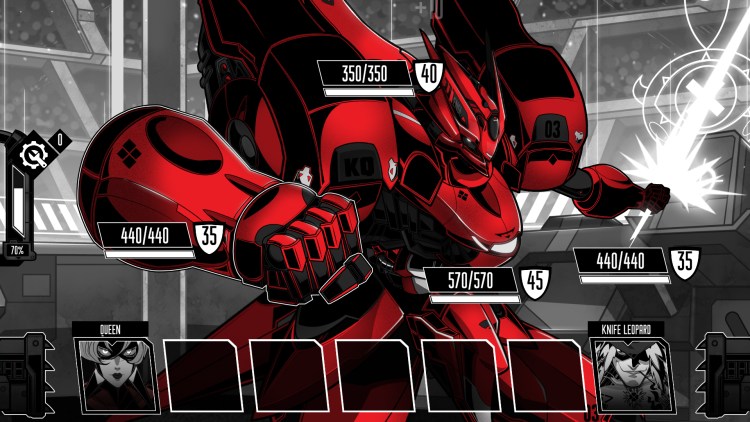 Speaking of the finals, the personal stories in the game wrap up nicely. In true anime style, there are some twists and surprising reveals. I was happy with how I left Shade and the gang. The narrative elements relating to an oil crisis and some mysterious super oil didn’t conclude in a satisfying way. And some of the monologues try too hard to be deep and philosophical. But they’re just intense words thrown together without context or purpose. And there’s a rant towards the end of the game about North America being bad that feels out of place. But like I said earlier, those elements weren’t the point of the game.

Wolfstride is all about the pack of definitely not lone wolves. The best part of its storytelling was when it focused on these conflicted characters. Their stories are what I cared about. And care I did. Just like when I reach the end of a good anime series, I’m happy I experienced it and a little sad it’s over. Wolfstride is an enjoyable anime-like mech fighting adventure with an interesting cast of characters. Other than the slow start, it's easy to ignore the parts that fall short.