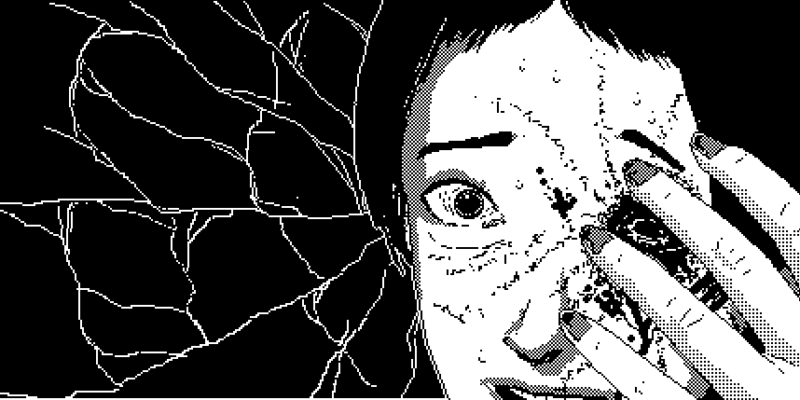 If anything, I’m a little surprised that World of Horror didn’t come out a week sooner. It’s a game in which you try to make informed choices and – depending on your luck, stats, and items – you may end up losing health or going insane. Which seems perfect for– oh, hang on. Okay, no, sorry. I’ve been told that jokes about Valentine’s Day are very last decade.

Regardless, that’s a pretty good summary of how World of Horror plays. The difference is, in place of love, you’re trying to stop eldritch abominations from awakening and eating the world. It’s a roguelite, presented in a 1-bit style, emulating the look and feel of adventure games on some very retro computers.

It’s also something I’ve wanted ever since I first discovered its itch.io demo a long, long time ago. Expectations were high.

The dawning of the darkest days 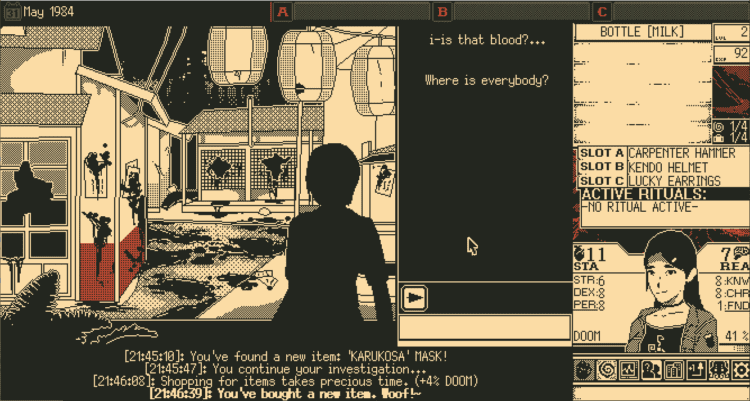 Aside from those retro titles, World of Horror‘s building blocks are very clearly the works of Lovecraft and Junji Ito. Weird things are afoot in the Japanese city of Shiokawa in the year 198X. Cults are holding strange rituals, people are disappearing, and an old god is awakening to claim the Earth. And you – as one of five playable characters – are the only one who can stop it.

Mechanically, this means solving five disparate mysteries, each of which nets you a key to the mysterious lighthouse. Get in there, and you stand a chance of stopping the old god’s return.

As with most roguelites (and eldritch horror scenarios) your chances are slim at best, and success will not come without a cost. Though you’ll level up and get better items, you will also accrue injuries and insanities that might make the last stretch a lot harder than the beginning. Having a sledgehammer and an arsenal of magic spells won’t do much if you’re concussed, cursed, and frostbitten.

Your three resources are stamina, reason, and Doom. Stamina is fairly self-explanatory: this is your “health”. Reason is your sanity, which drains as you witness horrifying situations, are assaulted with psychic attacks, or cast dark magics. And Doom? Doom is the timer until the old god awakens and the world ends. Investigating locations, resting, and going shopping all raise this, as the end of humanity draws ever closer. If any of these empty (or fill, in the case of Doom) then your game is over.

Exploring a world of horror 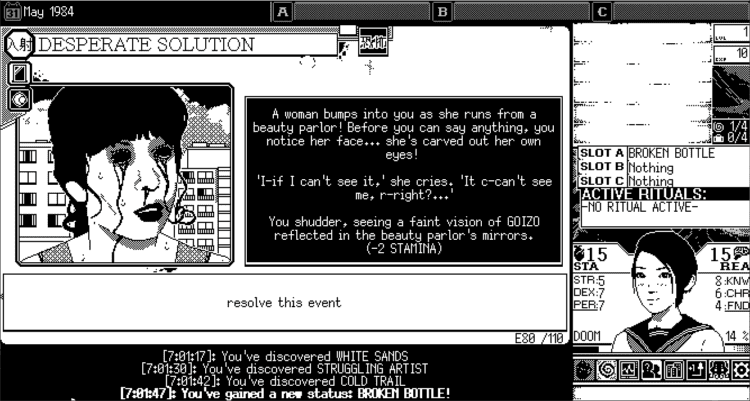 This encounter is unique to Goizo being your ancient foe. It’s also far from the worst thing to happen to eyes in this game.

Once you’ve picked your character, your background, and the old god you wish to face off against, it’s you against a heavily randomised world. There are 12 mysteries to investigate in this Early Access version, with more coming. World of Horror will pick five of them for each playthrough,

The mysteries are the juicy meat in this glistening horror sandwich. Each tells a terrible tale, and almost all of them have multiple endings based on choices and actions. They’re largely based on Japanese folklore, urban legends, or familiar stories. You’ll encounter Kuchisake-onna, investigate a strangely addictive ramen restaurant, and take part in the vigil of a deceased relative.

Most give you free rein in your actions. You can select a location and either investigate there, or go to a side area – tool up in a hardware store or recruit allies in a schoolyard, say – and take your time, Doom counter notwithstanding. Each investigated location triggers a random event from a pool of a few hundred. These might be a battle, a skill check, or a decision rewarded with items or costing you sanity. There’s some guesswork involved as to the “right” decisions to make, and sometimes it’s just picking the least worst option.

That said, some of the more interesting mysteries – the village festival, or the aforementioned vigil – lock you into a single location. The vigil takes place in a single building, with the mystery “progressing” as you explore the corridors. Here, discovered rooms can be visited and interacted with at any time, to no time cost.

Yes, it is a world of horror 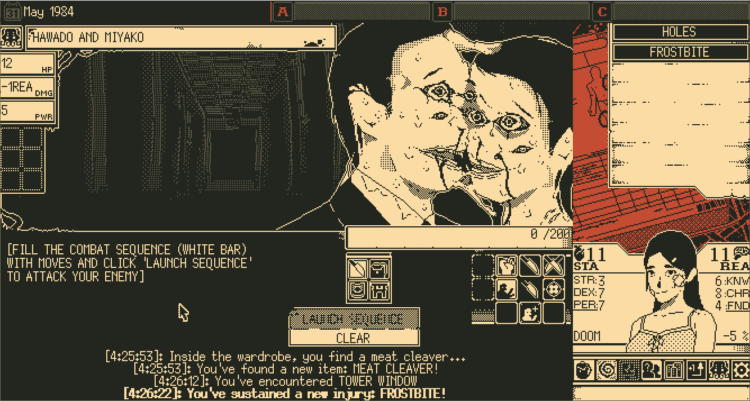 Combat gives 200 “action points” per turn, with each possible move taking up a certain amount. It’s an engaging little part of the game.

One thing I haven’t talked about is… well, the horror. This is always subjective but, to my mind, it’s excellently done. It veers a lot more towards being creepy than hitting you with jump scares, and it works really well. There’s a lot I don’t want to ruin, but to go back to the vigil mystery, your investigation makes things around the house… change. And despite the fact that you’re largely looking at static, one-colour images, it gets unsettling fast.

In a fair few scenarios, there’s a degree of genuine dread when clicking to investigate a new room. And that’s without mentioning the way things will subtly change depending on your settings or stats, leading to unexpected surprises. 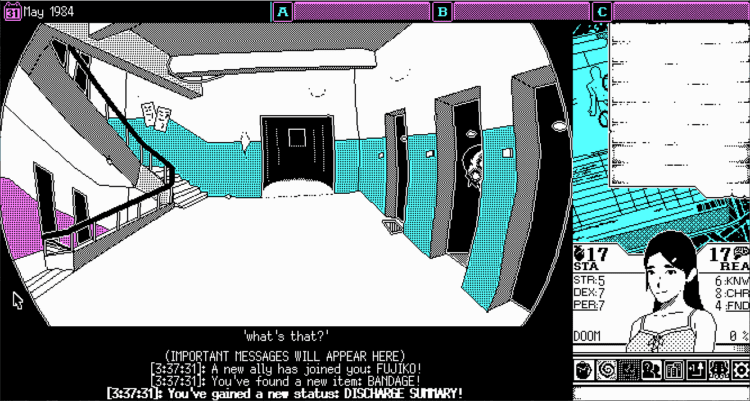 Color palette choice aside, being able to do little things like look through your peephole add a lovely bit of flavor.

This does pass, mind. While there are 12 mysteries right now, once you’ve seen all of them you have a fairly good idea of what to expect from each one. The ones that let you explore the city at your own pace have a lot more focus on the pool of random events and only really get nasty nearer their climaxes. Still, with multiple endings to each, far more events than you’ll see your first time through, and a continual stream of new items and events to unlock through successes and failures, there’s plenty of new stuff to experience.

Also, despite the low-res, one-bit graphics – apparently done in MSPaint, of all things – the art is stunning. You might think something like this would be fairly light for a horror game, but if you’re sensitive to gore or body horror (especially with eyes), there’s a lot of that here. Again, not something that should surprise anyone that’s read a Junji Ito manga. 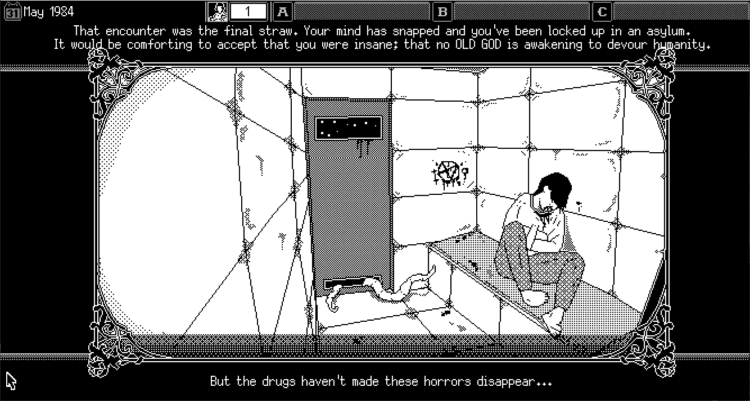 The downside is that it needs those bug fixes, at least in the pre-Early Access build. I’ve been playing around with it for a few weeks and some issues have been fixed over that period, with more promised to be fixed come the actual Early Access launch; but there are still bugs, crashes, and a slew of typos. In fairness, though, I kinda like the typos: they really add to the sense of this being a newly uncovered retro game with an occasionally iffy translation. The crashes are more of an issue, but at least games tend to be fairly short. There are also some features I’d love to have, with repeating my previous combat turn and disabling the mouse ghosting effect high on that list. 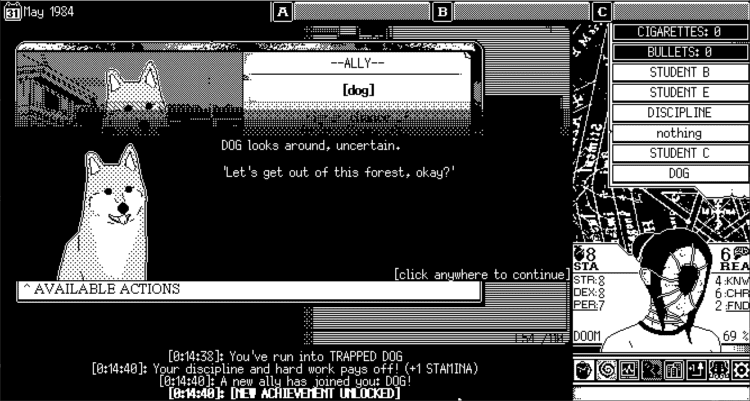 I’m fairly sure the talking dog is a bug, but I kinda hope this one stays in.

If it’s not clear, I utterly adore what’s currently in World of Horror. My only caution is that, yes, there are bugs, and at times the game can feel a little fragile. But I’ve loved the hell out of its deliciously gruesome stories and events, and its delightfully unique take on roguelite gameplay. I can’t wait for new content and I’m impatient to head straight back in, and I’d happily recommend it – but if your primary fear is of technical issues then I can’t fault you for wanting to dive into this world a little later.