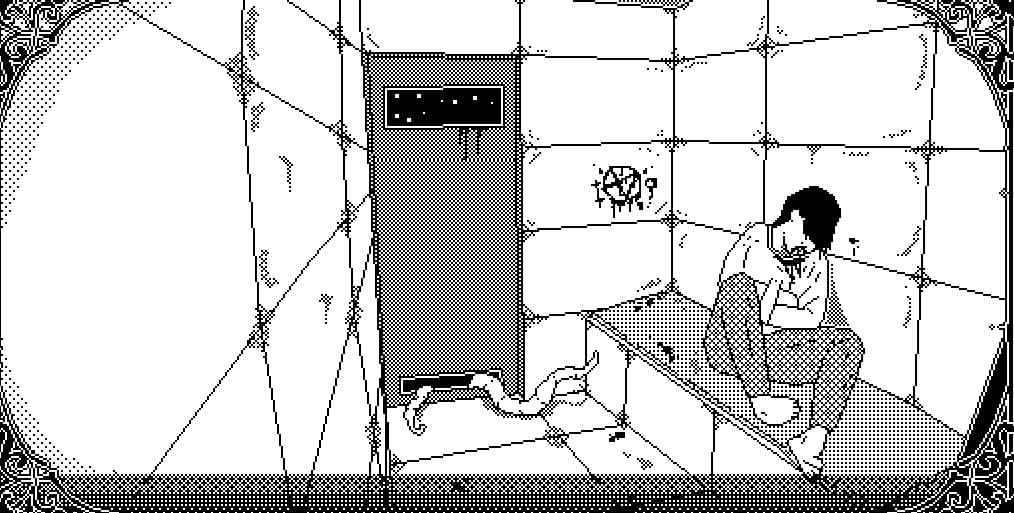 In the latest update (as of time of writing) for the genuinely excellent World of Horror, something truly evil was added. No, really: it’s actually called Something Truly Evil. This is an event chain you can trigger for a brand new creepy encounter, complete with a related achievement.

Right now there doesn’t appear to be an in-game reward for completing this achievement. Still! There likely will be in future, and besides, it’s a cool new encounter. Here’s how to find and survive your encounter with Something Truly Evil. 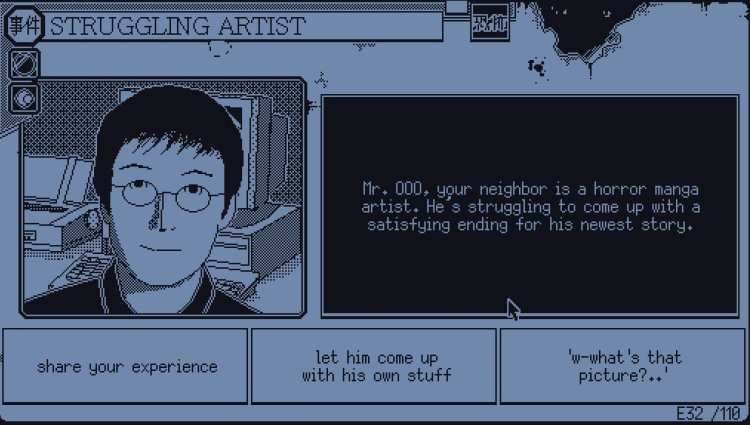 First, you’re probably going to want to do this in a run specifically aimed at finding Something Truly Evil. The encounter will leave you in a bad way, and deliberately seeking it out will waste an awful lot of time.

You’re going to need to be on a mystery with access to the regular map for this, so not Vicious Verses of a Violent Vigil or anything of the sort. You’re also going to need a bit of luck. There are a few ways to trigger it, but the fastest is to repeatedly investigate the Apartments until you get the Struggling Artist event (pictured above). Pick the option “W-what’s that picture…?” and you’ll see the Something Truly Evil counter appear in the top-left.

From there, a variety of events can raise the counter. Your best bet is still to go to the apartments again and again, though; the Unfinished Painting event there is another reliable way of increasing it.

Once the counter is at two, Resting on the main map will raise the counter. I believe you need the counter to be at four to proceed, so Rest twice. After that, investigate locations as you like: I’ve had the best luck with Downtown, but I suspect that’s just random chance. With a bit of (bad) luck, you’ll get a screen telling you that you hear a bell tolling and that your demise is here. So, you’re in a fight with Something Truly Evil but none of your regular combat options are present and you can’t flee. Fun fact: you actually can kill it by casting spells and throwing weapons, but this is likely unintentional and it won’t trigger World of Horror‘s new achievement. You have to do this the “proper” way to get that.

To begin with, your options are Suffer For Me and Cry For Me, each of which will hurt you for 2 Stamina or Reason a pop. Pick whichever pool is highest and run with it. You’ll soon unlock Bleed for Me or Give Up For Me, which set your Stamina or Reason, respectively, to 3. For the most part, I’d say don’t bother, especially if you have any status effects that cause you to take extra damage. Something Truly Evil still hits you every turn, and the extra damage can kill you.

You’ll then unlock Die For Me, which instantly kills you. Don’t use this for obvious reasons. After enough turns (I suspect it’s tied to losing a certain amount of Stamina or Reason, but it’s hard to be certain), the top-middle option — “Something Evil is sated” — will unlock. Use this to end the encounter, unlock the achievement, and reset your Something Truly Evil counter to zero. 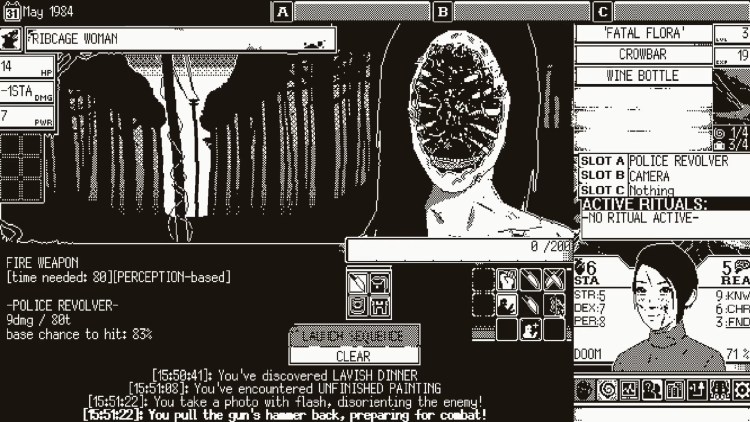 This isn’t it. You didn’t think I was going to spoil the encounter, did you?

And, for now, that’s it. You’ll want to go in with a reasonable amount of Stamina and Reason to ensure you can survive the encounter long enough to sate the… thing… and escape alive, and considering the fact that fighting it guarantees a loss to your health, you probably don’t want to do this on a “real” World of Horror run. Nonetheless, it’s a neat, unique, and very creepy encounter that’s worth checking out.

Also, be sure to have a look at your inventory when your Something Truly Evil counter is at three or above. Just saying.

By Jack Salter13 mins ago
Guides

By Jack Salter28 mins ago
Guides

By Cameron Woolsey36 mins ago
Guides

Hogwarts Legacy: How to Solve All Divination Classroom Door Puzzles