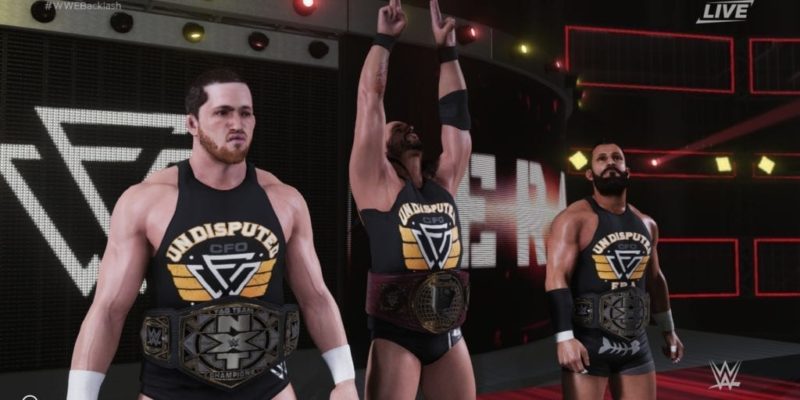 Having played WWE 2K19 for the past couple of days — completing the Daniel Bryan Showcase, making more CAWs, and kickstarting my Universe Mode — I truly believe that it’s a major improvement over past titles. That’s why you’ll notice in our PC game review that I gave it a fairly generous score. But game reviews tend to be a mix of the subjective and objective, plus how any problems can affect the overall experience, if ever. WWE 2K19 does have its issues, but thankfully, the ones I experienced were few and far between. I’ll provide more details for this technical review, but first, let’s look at the specs and graphics. 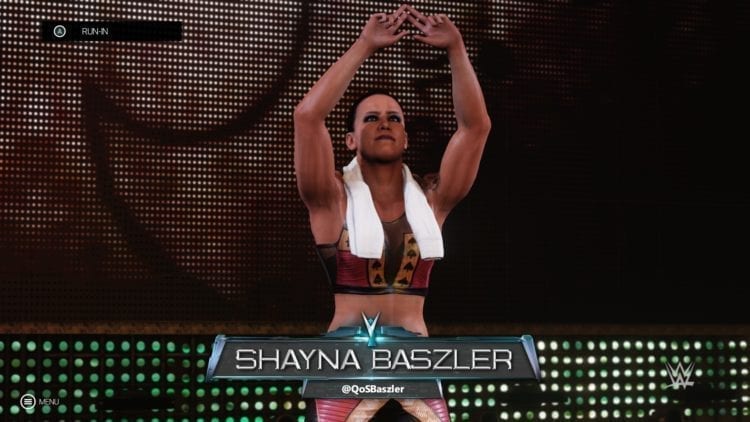 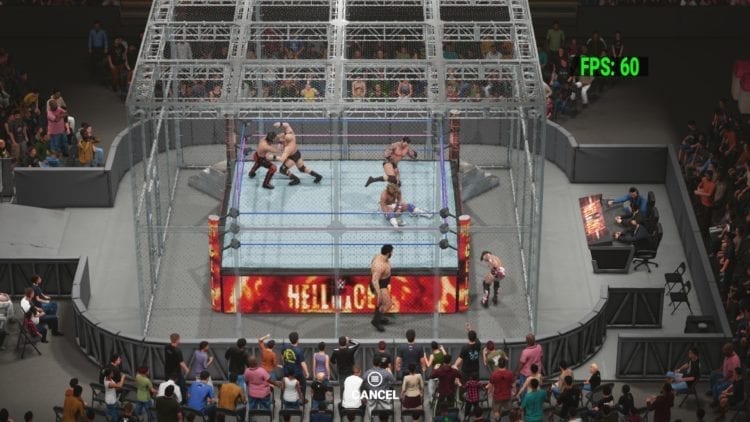 Okay, so the benchmark tool for WWE 2K19 is not the most helpful one around. For starters, it’s a Hell in a Cell match pitting the likes of Stone Cold Steve Austin, Andre the Giant, Ultimate Warrior, Daniel Bryan, Seth Rollins, and Randy Orton. It’s definitely the most graphically-demanding match type in the game, and even then you aren’t burdened yet by CAW creations and a slew of custom logos and images.

The benchmark lasts a couple of minutes, after which you’ll get your results. Here’s mine:

At first, I scratched my head. I was well above the recommended specs, so why did I end up with those results? I reviewed my settings: 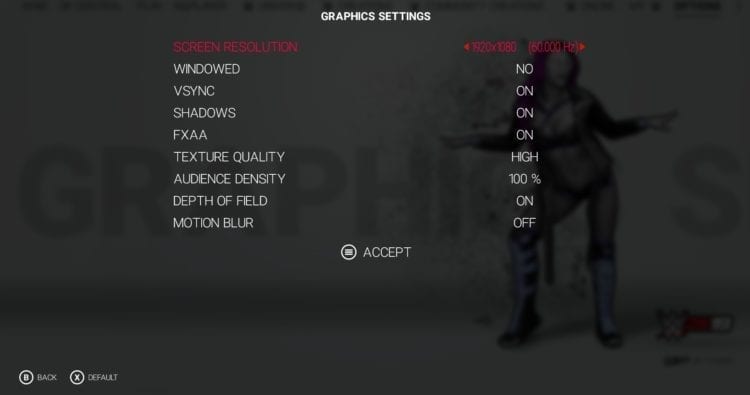 Everything’s all turned on or maxed out; the only things disabled are Windowed Mode (why of course!) and Motion Blur since it makes me nauseous. So why am I only getting roughly 60 FPS? What will happen if I lower the settings? I did just that, turning off every setting with texture detail set to “Low” and Audience Density set to “0 percent.” Here’s the result:

Well, it seems it doesn’t make a difference whether I have all the settings maxed out or not, everything will still be around 60 FPS. It seems as though WWE 2K19 is more optimized for consoles, with uncapped frames on PC being an afterthought. Anyway, let’s compare the graphics: 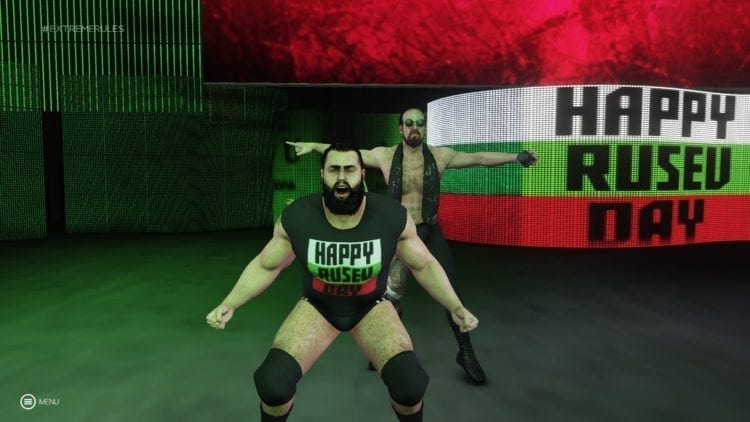 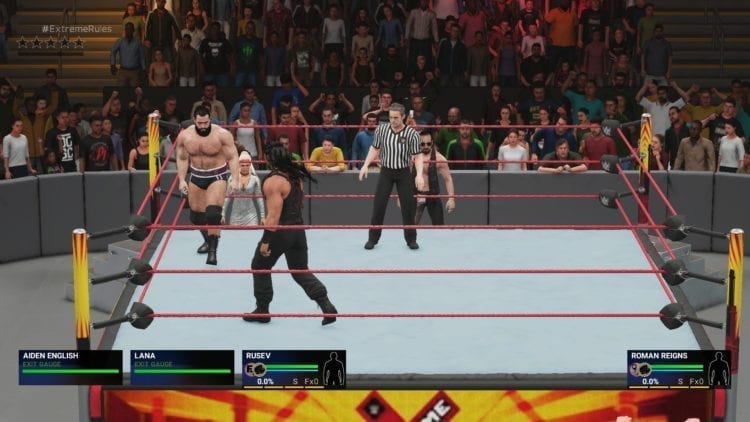 Suffering succotash, Roman Reigns! I did not know I was playing a mobile game with graphics like that! Better ask Xavier Woods or Cesaro if they’ll feature this new title on UpUpDownDown. Who knows, maybe the cover star — The Phenomenal AJ Styles himself — is looking for this particular classic gem in his Retro Styles show?

Anyway, I digress. I set everything back to the highest quality (same settings you saw above) and here’s what we have: 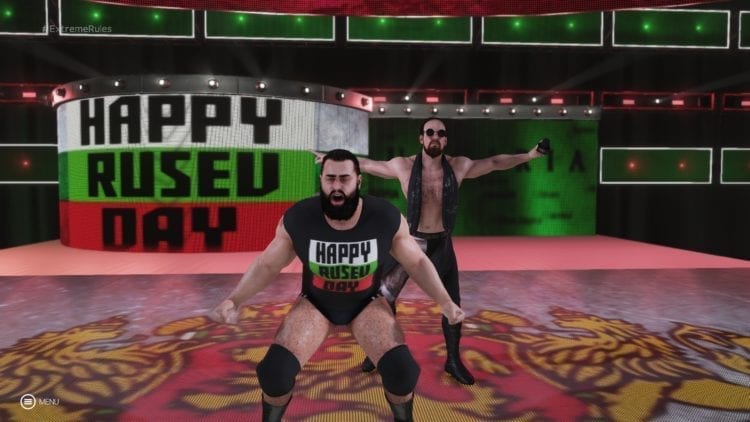 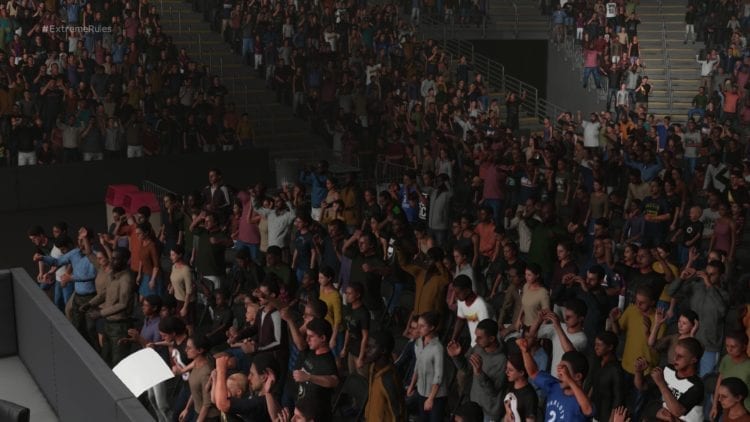 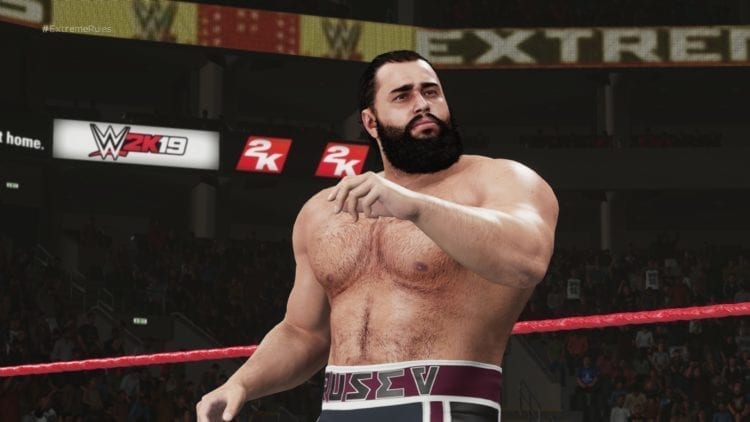 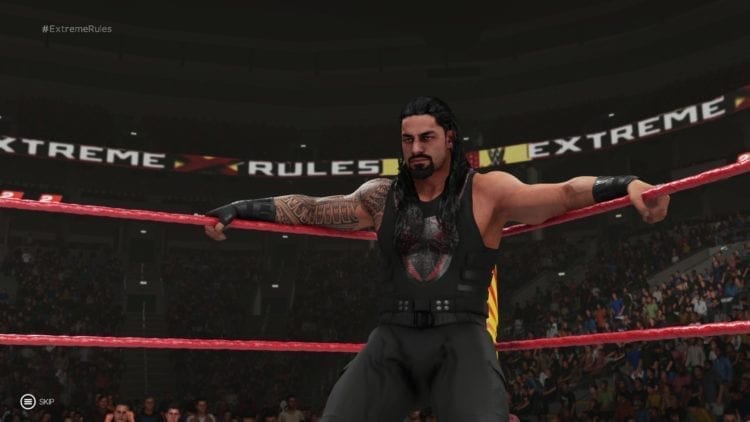 There we go. I can finally see all of Rusev’s chest and leg hair in their full glory!

Needless to say, if your machine can handle the graphics settings then you’ll want to play with everything maxed out. If you do need to sacrifice quality for the sake of performance, you could drop FXAA and Shadows if you prefer.

You can also tweak the Audience Density setting. That lowers the number of models that need to be rendered in the background. Beware, though, that there’s an odd bug that you might experience. I present to you The Case of the Disappearing Crowd: 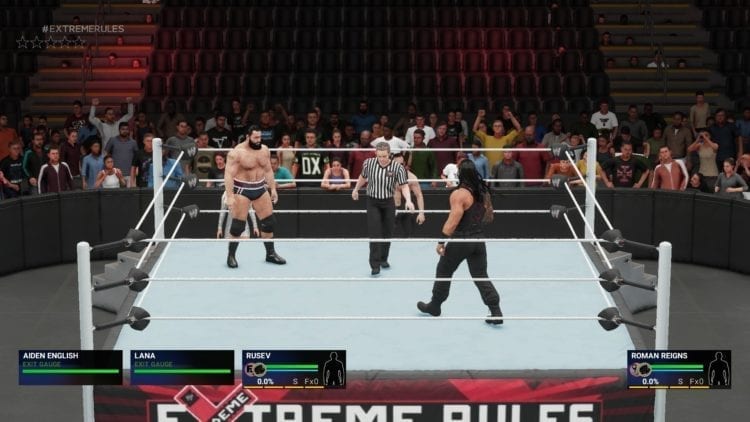 I did not know fans hated Roman that much!

The audience members started sinking under their chairs and even the arena stairs as well. I’ve only seen this happen once when tweaking the setting. That’s why I just kept it at 100 percent. 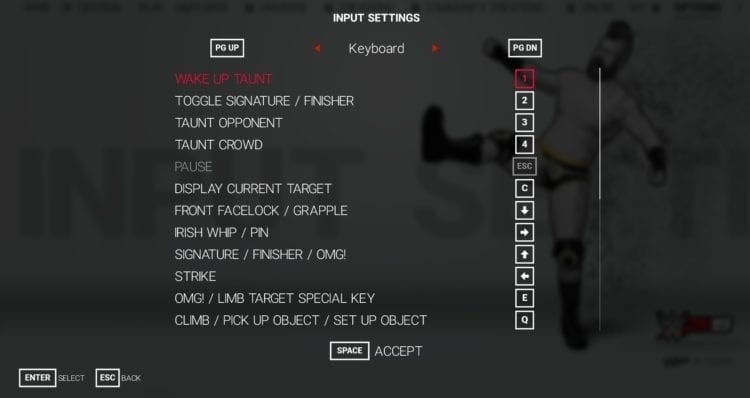 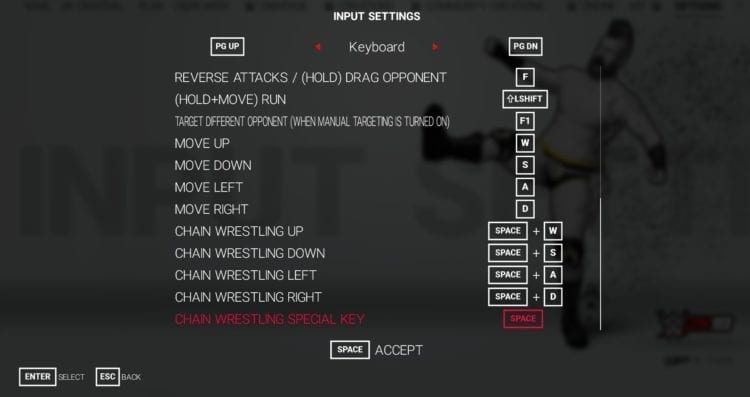 It goes without saying that you should probably avoid playing WWE 2K19 with a keyboard. I’m sure you can make it work, no worries. But that’s like saying you can make Charlotte’s babyface push against Becky Lynch work as well. It’s just an uphill battle where everyone else tells you to stop doing that. 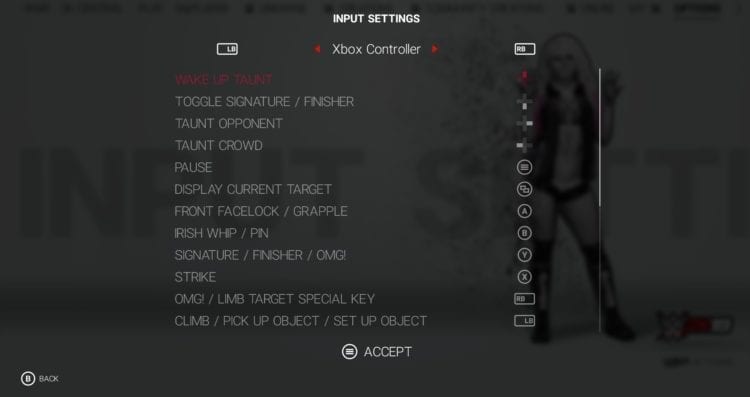 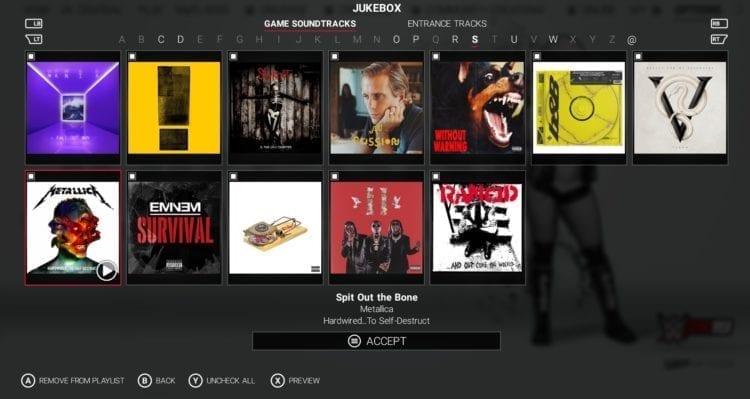 The soundtrack for this game is fairly limited, but you do get tracks from Eminem, Metallica, Slipknot, and more. Likewise, you can always listen to WWE superstar themes. I’m probably one of those who gets a kick whenever I hear that riff from the Undisputed Era theme made by CFO$ while I’m making a CAW.

As for the commentary, well, it’s a lot better in the Daniel Bryan Showcase and MyCareer/MyPlayer. There are unique lines and banter that will amuse you. One particular standout is Michael Cole ragging on Daniel Bryan when he was on NXT. Byron Saxton quips about wanting to be on NXT, which Cole scoffs at. For wrestling fans, the commentary was for Bryan’s matches in mid-2010; Saxton did not become an NXT rookie until later that year.

But, again, commentary will get tiresome after a while, especially when you hear the same quips over an over — like any mention of “the WWE Universe” or “getting fired up.” There was also one particular bug during MyCareer when Cole kept calling my male character and El Mago as women. I guess El Mago and I started the Women’s Revolution? Also, in a couple of matches, the crowd noise kept fluctuating from barely audible to a sudden noise. I had to check if I was having a match in the Tokyo Dome because the fans were being very respectful, but no, I was in Philly. 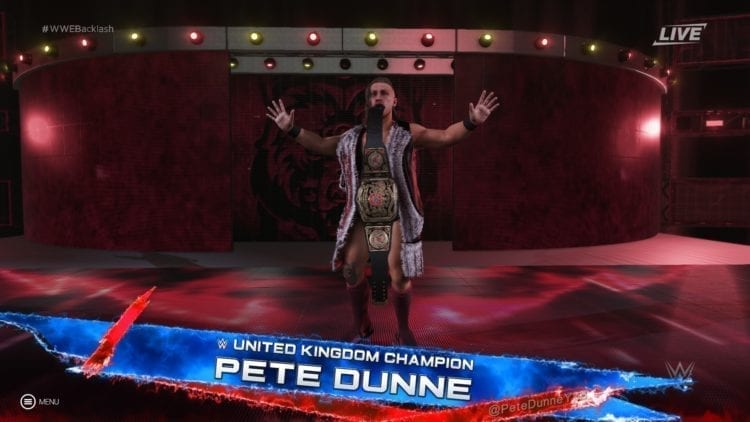 As mentioned in the game review, the animations underwent improvements. There might be some wonky instances such as limbs flailing around when a competitor gets dropped near the ropes, or the character’s model colliding with that object and suddenly things go haywire. This and other problems that have plagued the WWE 2K series since time immemorial can still happen. Fortunately, they are not as frequent as in the past. Still, it’s like: “Bugs — Then. Now. Forever.”

Still, they weren’t enough to detract from the overall experience or the improvements that WWE 2K19 presented. I haven’t experienced anything that was thoroughly game-breaking or extremely glaring — save for that weird rendering for my character’s van windows in MyCareer.

The one thing I’m extremely cautious about is the Creation Suite and blank images bug. It’s when you start downloading CAWs and logos only to find that some of the images are blank. Later on, your game is no longer able to download any creation, let alone save the ones you’re editing. The only recourse is to pinpoint which images are causing the issue or load an older save. This caused a major problem for me last year, and I am not aware if it reared its ugly head in WWE 2K19. Hopefully, it’s been fixed in the interim.

Don’t forget to check out our game review as well to see how things handle away from the technical side.

WWE 2K19 PC Review: No Longer The Yearly B+ Player