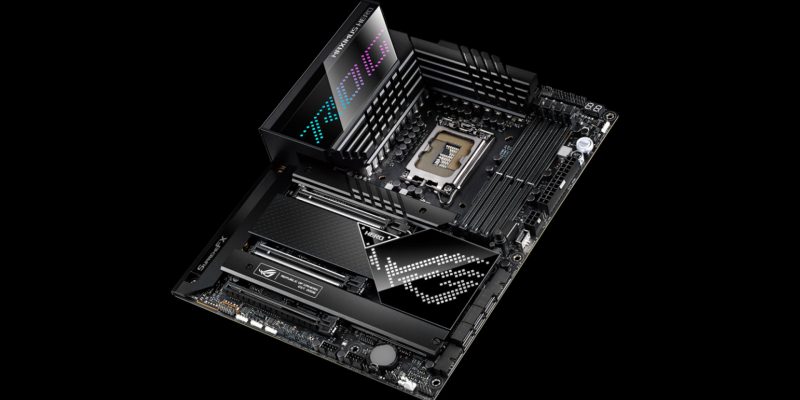 Choosing the right motherboard can be confusing due to the plethora of specification and configuration options one must account for when piecing together a new gaming PC. One thing that will undoubtedly cause more confusion and debate in the near future is the PCIe 5.0 motherboard spec. It’s the latest and greatest thing; it offers tons of bandwidth for high performance components to function properly.

The problem lies with getting your system up to snuff for PCIe 5.0, as it is only supported on the latest Intel 12th gen and the upcoming AMD Ryzen 7000 Series CPUs and motherboards. Fortunately, you won’t need to worry about having PCIe 5.0 anytime soon.

Components relevant to high-end PC gaming requirements are centered around the PCIe 4.0 spec and will remain that way for the next couple of years at least. This can get confusing, though, due to online debates among PC power users and those who like to look at specs on paper versus realistic application. And, as mentioned, we can see that Intel 12th generation motherboards already offer PCIe 5.0 support. The same will also be true of AMD Ryzen 7000 Series boards.

The PCIe 5.0 spec will be useful for creators and professionals that want more performance, but it won’t do much good for gamers anytime soon. This mainly boils down to the lack of software support for said hardware, along with financial costs. Tack on the configuration limitations of PCIe 5.0 motherboards, and we have a recipe for how to overspend on a gaming PC. 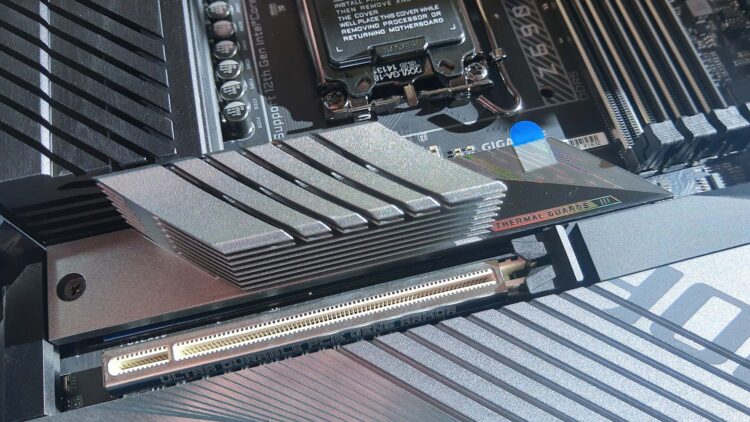 Your next graphics card will perform fine with PCIe 4.0

The main difference you need to know between PCIe 4.0 and PCIe 5.0 is that PCIe 5.0 offers double the total bandwidth over the previous generation. GPUs need a certain amount of bandwidth to communicate effectively with the CPU as well as storage devices. Graphics cards only need to communicate so much data at once, though, so an overabundance of bandwidth capacity can easily go unused and thus be unnecessary.

A good analogy for this is how water flows through a pipe. Say you have a drain pipe to mitigate rain water, and it never fills more than half way, even during downpours. The pipe is sufficient for the task, but perhaps you could of used a smaller drain pipe with no drawbacks.

This illustrates the case with current gen graphics cards when run on PCIe 4.0 with the full 16 lanes allocated in the primary graphics card slot. There’s more than enough bandwidth available when the full 16 lanes are allocated. The same can even be said for PCIe 3.0, unless perhaps you’re using an RTX 3090-class graphic cards. Gamers love framerates, though, so we’ve included some benchmarks to show the lack of variance between PCIe 3.0 and 4.0. 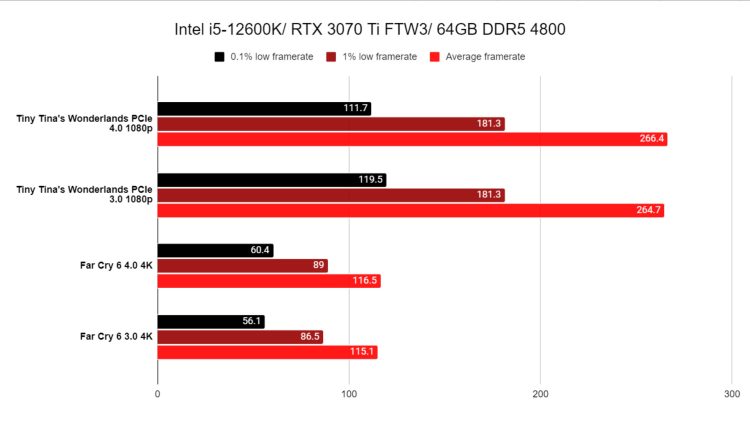 Benchmarks can vary run-to-run, so the minor variance here is nothing to obsess over. (Image credit: PC Invasion).

Future generations of graphics cards will require more bandwidth, but it’s clear that gamers won’t need to worry about PCIe 4.0 hampering their framerates anytime soon. Given that PCIe 4.0 also offers double the bandwidth over PCIe 3.0, there should be plenty of headroom for at least a couple more future generations of graphics cards. In conclusion, you won’t have to worry about compatibility on older motherboards anytime soon, even when you see new graphics cards marked as PCIe 5.0 compatible.

Not all PCIe 5.0 motherboards are fully future proof

One of the main draws of buying a motherboard with PCIe 5.0 support is the allure of future proofing. Intel was first to the party with Z690 for its 12th gen CPUs, but AMD will soon offer PCIe 5.0 support on its X670 motherboards for the Ryzen 7000 Series. There will, however, be a catch for some models.

Those that are interested in getting a new motherboard for the specific purpose of guarantying future proofing in all aspects will need to ensure there are at least 20 PCIe 5.0 lanes available. 16 of those will go to the primary graphics card slot, while the other four will be needed to handle an SSD. 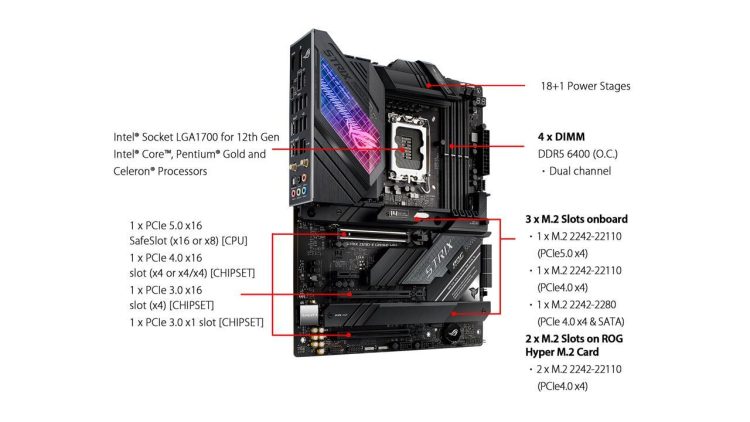 The ASUS ROG Z690 Strix-E Gaming motherboard already supports the option to configure PCIe 5.0 x8 to the GPU and x4 for adding a PCIe 5.0 SSD in the future. (Image credit: ASUS ROG).

This can obviously be a problem for those interested in total future proofing, but it’s not the worst thing in terms of practicality. Refer back to the benchmarks for PCIe 3.0 vs PCIe 4.0 in x16 configurations for graphics cards. There’s no perceivable difference in performance, and PCIe 5.0 x8 is equivalent to PCIe 4.0 x16.

It’ll be up to you to pick the right motherboard and CPU if you want a “future proof,” no-compromise solution for lane configuration. However, it will be perfectly fine for the foreseeable future if you sacrifice lanes to run x8 to the graphics card and x4 + x4 for PCIe 5.0 SSDs. Alternately, it will also be fine to run a x16 PCIe 5.0 configuration to the graphics card and just use PCIe 4.0 SSDs. Either way, you’ll have years before you encounter performance losses in games due to your lane configuration if you follow this format. We’ll next explain why the PCIe 4.0 spec will become a longtime standard for gaming storage solutions.

The major problem we have with PCIe-based SSDs is the lack of application in game engines. The fastest PCIe 4.0 SSDs help you load your games and OS significantly faster than HDDs, but are only a few seconds faster over cheaper SATA SSDs. This has been the case for many years now, and it probably confuses the wider audience of gamers as to why these (previously pricey) storage drives cause so much fuss.

Quite a few of today’s PCIe 4.0 drives manage read speeds of 7,000MB/s. By comparison, SATA SSDs are capped around 550MB/s. Even the fastest HDD will only reach 160MB/s. Previous generation consoles used HDDs, but the latest gen features PCIe 4.0 drives. That may seem like quite the jump at face value, but console PCIe 4.0 SSDs are meant to be cost effective. They pale in comparison to pricey, high performance models available to PC users. Successive console generations will need some time to catch up. With this in mind, you can see why PC gamers with decent PCIe 4.0 SSDs won’t have to worry about needing anything better anytime soon. 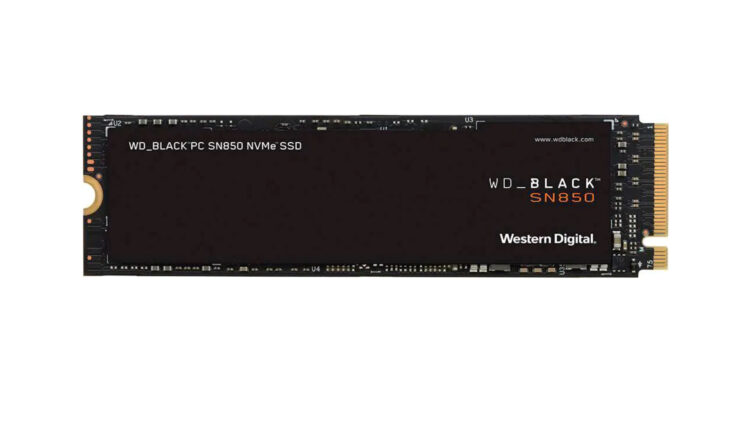 There are plenty of options on the market, but you’ll want to ensure you buy a fast PCIe 4.0 SSD for long term gaming use. (Image credit: Western Digital).

The software is the real problem at this point. Game engines are built around the hardware that developers expect users to run the games on. Although PC gaming has grown significantly over the past few years, the overall gaming market is still dominated by consoles, which still used HDDs prior to the current generation. Once game developers drop support for older consoles, PCIe 4.0 drives will become the minimum standard in new games. With that, game developers can then design engines to fully utilize fast SSDs. This will allow for near-instant load times with technologies like DirectStorage. Perhaps more importantly, asset streaming will be possible. This technology will allow for reduced game file sizes and improved render optimizations, equaling better in-game performance.

The current-gen consoles have already been out for almost two years, and the first game to use DirectStorage on PC won’t even arrive until next year. It’s even more ambiguous when asset streaming will be put into use, but new engines like Unreal Engine 5 should pave the way. For now, game developers need more end-users to adopt better SSDs in order to justify the challenges and costs of designing game engines that utilize said hardware. Things won’t change overnight, but we’ll definitely see developers advertise fancy tech demos as new projects reap the technical benefits of high-bandwidth PCIe SSDs.

So will you need a PCIe 5.0 SSD to properly enjoy games that use DirectStorage and the other technologies brought on by fast SSDs? The answer is no. And that won’t change for many years. As mentioned before, console SSD specs are still significantly slower than what a high-performance PCIe 4.0 SSD can do on PC. If anything, software and firmware support will play crucial roles in accelerating the performance of storage drives. PlayStation’s Mark Cerny touched on this in a video about designing the Playstation 5.

Developers are going to target console specs when designing games. Scalability will be another important factor to ensure compatibility with a wide range of SSDs, allowing more potential customers to meet the hardware requirements. We might eventually see PCIe 5.0 SSDs perform slightly better with shorter loading times and reducing in-game stutters, but PCIe 4.0 drives will not hamper your experience until consoles consistently outperform the PCIe 4.0 spec for several years. Purchasing a good PCIe 4.0 SSD now will prove to be a solid investment for many years, if not the better part of a decade.

Additional hurdles for PCIe 5.0 SSDs will be pricing and cooling. You shouldn’t expect PCIe 5.0 SSDs to be cheap once products start entering the market, and you’ll need large heatsinks or active fan cooling to prevent thermal throttling at high speeds. These characteristics will only present new complications for PC OEMs and console manufacturers to affordably solve, so PCIe 5.0 SSDs will likely stay in enthusiast circles for a while.

Live in the present

Gaming PCs tend to quickly become expensive, so knowing what you do and don’t need to buy pays off. In this case, you won’t need to worry too much about the PCIe 5.0 spec until there are better use cases for the technical benefits. It certainly won’t hurt to buy components like motherboards that support PCIe 5.0, but you shouldn’t feel like you’re missing out on performance without it.

Intel Arc A750 performance competes well against the Nvidia RTX 3060