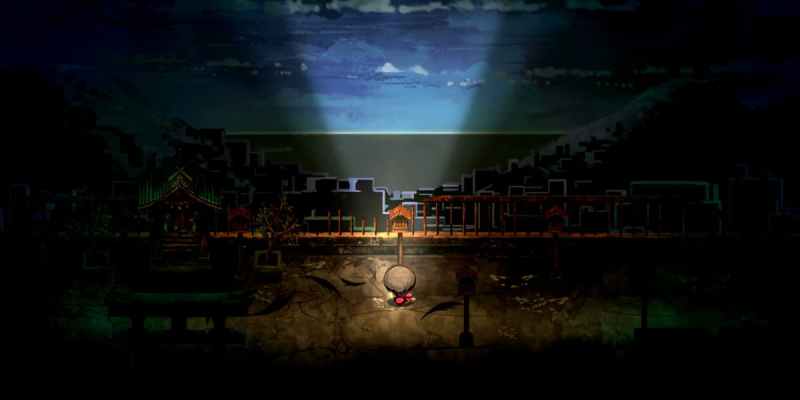 As someone who previously never touched the Yomawari series and has limited experience with horror games in general, I didn’t know what to expect with Yomawari: Lost in the Dark. Upon playing, the painterly 2D aesthetic immediately captivated me, but the simplistic mechanics and generally slow pacing made for a bit of an adjustment period at the start. After stumbling through my first major story quest, however, it didn’t take long for me to grow fully immersed in the dark, unsettling world that developer Nippon Ichi Software has created. The gameplay may be something of an acquired taste, but Yomawari: Lost in the Dark will more than reward those who stick with it.

No waypoint markers in this one

The game’s core structure is a fairly simple one: players find an item leading them to the location of one of the protagonist’s lost memories, and then they acquire the memory upon confronting the area’s main threat before repeating the process all over again. This presents more of a challenge than one might initially assume, however, as Yomawari: Lost in the Dark adopts a relatively hands-off approach in terms of player guidance.

The first few items that kick off the various “memory quests” are given to players right away at the protagonist’s house, but the rest are scattered across the game’s sprawling overworld town. Not only does the game never explicitly tell you where these plot-critical items are located, but it also blocks off certain areas until you find these items or reach some other criteria in the story. You have to repeatedly check the map to see which areas you haven’t explored and scope them out, which may sound like an exceptionally tedious process to some.

Fortunately, with maybe one or two exceptions, mandatory items are typically placed in locations that can be stumbled upon naturally while playing. So progressing without a guide mostly isn’t an issue, at least until near the end. Additionally, examining the plentiful nooks and crannies around town will often reward you with a collectible item containing a unique description or even a small sidequest to engage with. So even if exploring the map doesn’t always result in plot progression, it’s usually worth it just to see what surprises the world has in store. 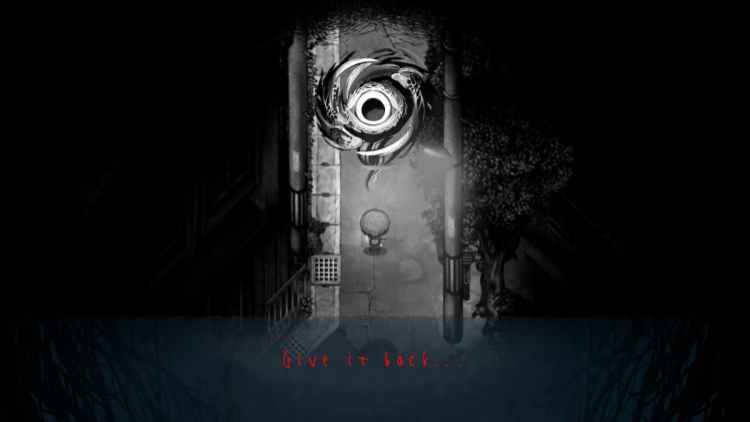 Be careful where you tread

Speaking of surprises, these make up the main reason why exploring the world of Yomawari: Lost in the Dark remains so enjoyable even 10 hours into the game. These surprises are mainly in the form of Yomawari’s yokai-inspired demons, which come in all shapes and sizes and attempt to both frighten and instantly kill players unfortunate enough to cross them.

Now, although I refer to the demons as surprises, those who have prior experience with the Yomawari series may not necessarily see them that way. As indicated by many of the Steam reviews and footage from the previous games, many of the demons that show up in Yomawari: Lost in the Dark are ripped right from prior entries, which will likely diminish the impact of seeing them for some. Given my lack of experience with the series, I cannot personally speak to the game’s level of asset reuse. But what I can say is that, as a newcomer, I couldn’t help but be impressed by the sheer variety of demons and other paranormal threats on offer.

No shortage of threats to consider

Nearly every corner of the map, whether it be a seemingly innocuous part of town or one of the dungeon-type areas required for progression, has a unique demon type or obstacle to discover. Sometimes, it’s something as simple as a one-eyed dog monster that barks at you on sight. But others, like the demonic trains that run you over as soon as they step on train tracks drawn in chalk, make for startling moments of off-the-wall creativity that can stick with you long after the credits roll.

Even when returning to areas you’ve already visited, you may end up confronting a new enemy type found nowhere else in the game. And that’s not even getting into the countless one-off scenarios you can run into across the map, such as the ice pick lying on the road that kills the you outright if you interact with it in a certain way. It seems likely that the game’s economical use of preexisting assets is precisely why the developers were able to cram as many distinct enemies and scenarios as they did. But either way, the variety makes for a delightfully terrifying playthrough where it feels like anything and everything could be lying around the corner. 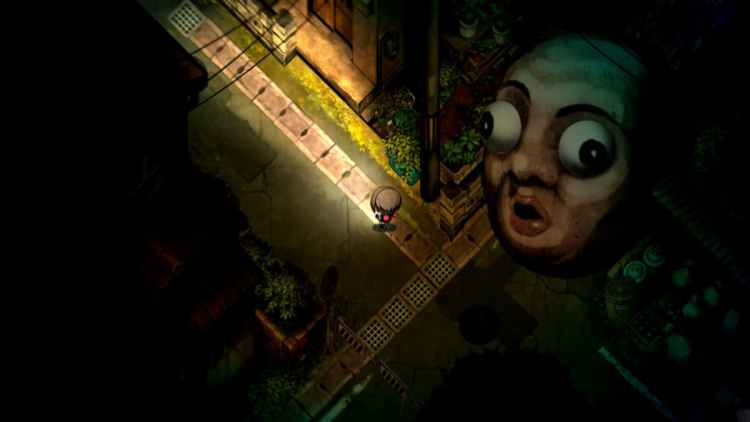 Work with what you have

No matter what you encounter, though, you are never given anything more than the bare essentials to deal with them. Since your player avatar is an ordinary child, you don’t have any weapons with which to fight these deadly spirits, so you’ll have to sneak or outright run past them to reach your next objective. You do have a few tools to make this process easier, such as throwable rocks and paper airplanes used for distractions and a new “closing your eyes” mechanic that renders you mostly invisible to demons at the cost of your movement speed, but the gameplay otherwise retains this simplicity throughout.

It may sound like the gameplay would get stale rather quickly, but the one-hit-kill properties of the enemies and hazards as well as the often sparse save points mean that Yomawari: Lost in the Dark always remains tense and challenging. The game ramps up the stakes even further by requiring you to spend hard-earned coins if you wish to save. However, since coins are abundant and always respawn after death, the gameplay doesn’t gain much from this feature.

It all comes down to this

The gameplay reaches its peak whenever you have to confront one of the boss-like demons found at the end of each story quest. These encounters usually come in the form of elaborate chase sequences that require players to think and act quickly to avoid both the boss and the onslaught of obstacles that appear along the way. Although the complexity of these sequences rarely goes beyond simple evasion, the mechanical distinctness of each encounter as well as the ways in which they gradually escalate the challenge elevate them considerably.

Having said that, there are a few too many instances in which these sequences throw obstacle setups that are difficult if not impossible to anticipate beforehand, making a game over practically inevitable on your first playthrough. This is made more frustrating by the mostly absent checkpointing and unskippable intro cutscenes, although the game does try to soften the blow of these a bit by playing a truncated version of the cutscene upon repeated attempts. 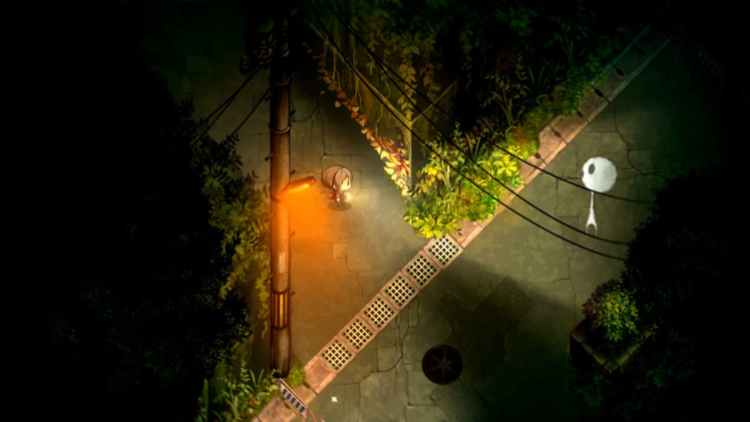 No matter what your current objective is, the tension associated with encountering and narrowly avoiding spirits is heightened by the game’s aesthetic choices. The environmental lighting and sound design are immaculately crafted, providing an atmosphere perfect for rendering you anxious and fearful of the unknown. The painterly art style ends up working perfectly for the demons, as it lends a roughness to their visual design that makes them even more delightfully unpleasant to look at. The icing on the cake is the simple yet effective heartbeat sound effect that quickens as you get closer to the spirit, immediately informing you how much danger you’re in.

Where this tension fades away and shifts into annoyance is in some of the optional sidequests. Many of these are worth doing due to the unique little stories they tell, but from a gameplay standpoint, they usually don’t involve much beyond mindlessly wandering around and picking up items. One of the worst ones has you finding ghostly rabbits hidden across a school campus and slowly carrying them all the way to an animal hutch on the southwest side of the area. There’s nothing inherently wrong with a slow-paced game, but repetitively trudging across an empty area several times at a snail’s pace with barely any obstacles to avoid along the way is not exactly what I’d find fun under any context.

Lost in the inventory

Another area in which Yomawari: Lost in the Dark could have used some streamlining is in its inventory system. Over the course of the game, you pick up countless items that they will have to sift through to unlock doors or other progression gates. This would be a fairly trivial process, except that the inventory does not categorize or clearly sort the items you collect, which can make picking the right one take much more time than it needs to. Over time, you start to get a feel for how to visually identify these items and where to look in your inventory, but implementing even just a few more visual aids could have gone a long way toward mitigating this issue.

Flaws like these may be frustrating in the moment, but as soon as you reach a new surprising moment or reimmerse yourself in the game’s world and narrative, it’s easy to forget about these minor annoyances. Yomawari: Lost in the Dark demands you go in with a certain mindset, one that’s willing to put up with some rudimentary or occasionally frustrating mechanics in service of the overall experience. Once you fall into the game’s groove, there’s something almost cozy about it, which may seem insane to say given all the jump scares and nightmare-inducing imagery on display here. But even after the credits roll, it’s hard not to feel the urge to go back into that world and stay in it for just a little longer. Just for that alone, it must be doing something right.

Yomawari: Lost in the Dark

Yomawari: Lost in the Dark's core gameplay loop is one that's not exactly brimming with mechanical complexity. But thanks to the impeccable atmosphere, extensive enemy variety, and memorable moments, the game doesn't really need it.

By Jason Rodriguez36 mins ago
Reviews

By Dani Maddox7 hours ago
Reviews